I have long been a fan of Codemasters’ titles as they have had a successful history of releasing quality racing titles, from the stunning Grid titles to DiRT. On top of some of the most enjoyable racing games, Codemasters has also brought us the sorely underrated Operation Flashpoint games as well as the wonderful Overlord franchise. Given that Codemasters develops some of my favorite racing titles like DiRT and Grid, and they have been developing the F1 series for five years now and they have long been the “it” studio for all of your F1 goodness and it looks to continue the trend with F1 2014. While this is the first F1 game that I have played since the Super Nintendo’s F1 Pole Position, I am looking forward to what these masters of racing games can bring me. 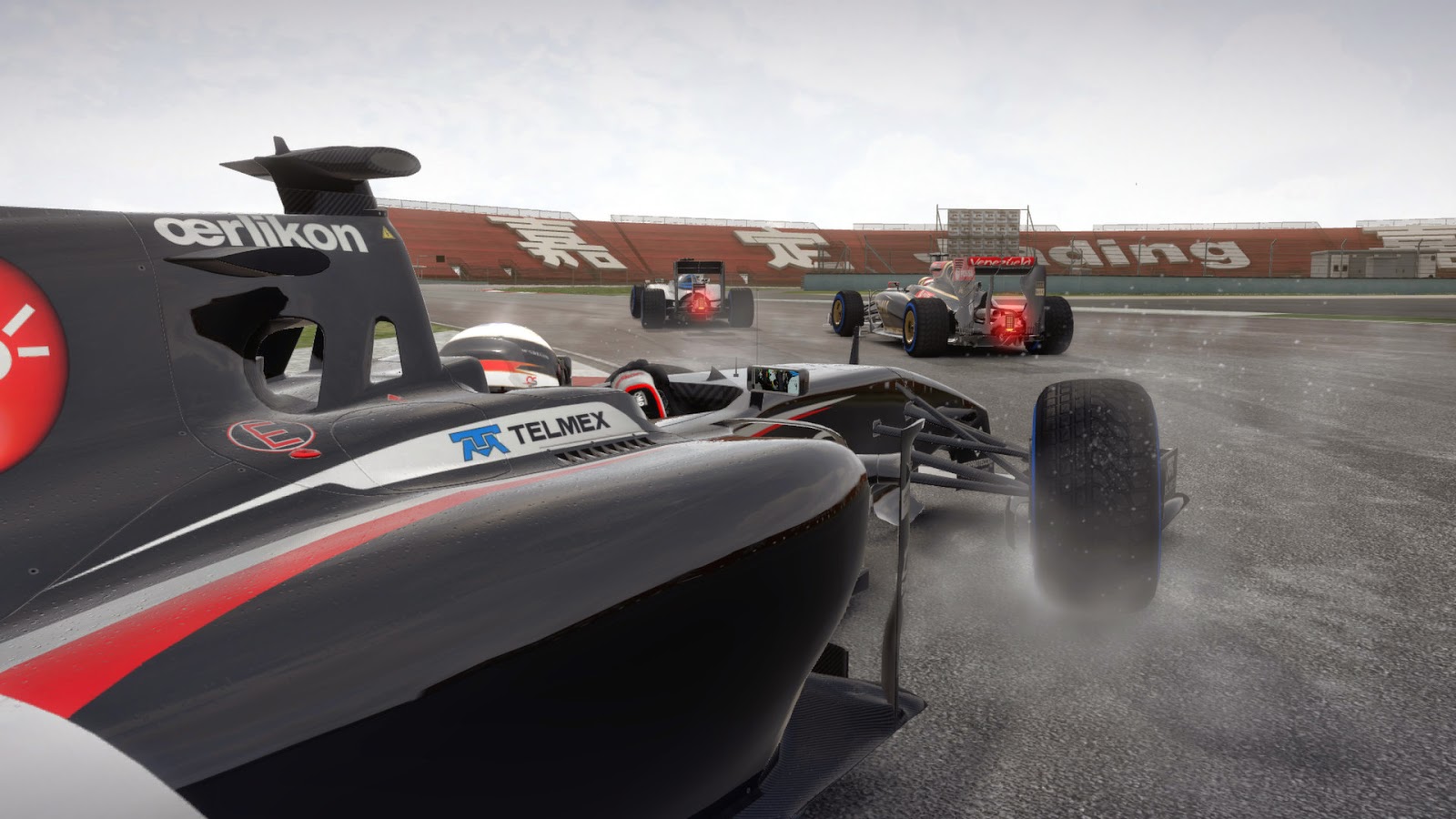 I am going to start with the most glaring aspects of F1 2014; on the PlayStation 3 it shows its age, and not well. It is not that F1 is a bad looking game, it simply looks decidedly last-generation and in some cases, even worse. There were a number of times where the front wheels turned square-ish, showing straight edges where the rubber should be round. I noticed it more and more as I would cut corners and see dirt and other debris appearing on the wheels. It did not happen all the time, but enough that I felt it prudent to mention it.

You can definitely tell that Codemasters spent the lion’s share of their time developing the actual asphalt/concrete and the vehicle models as the skybox is so-so and the grandstands are pretty lackluster, not to mention the horrid texture used for grass. I can say though that the cars, with the exception of the weird issue that I saw with the tires, are of exceptional quality. As your opponents streak by you (which they will) they look stunning, pit stops are quite attractive, and while the skybox is pretty ho-hum, the lighting is excellent. Lens glare appears at all the right (and wrong) places and is extremely realistic and helps cover the environments in something akin to an attractive haze. 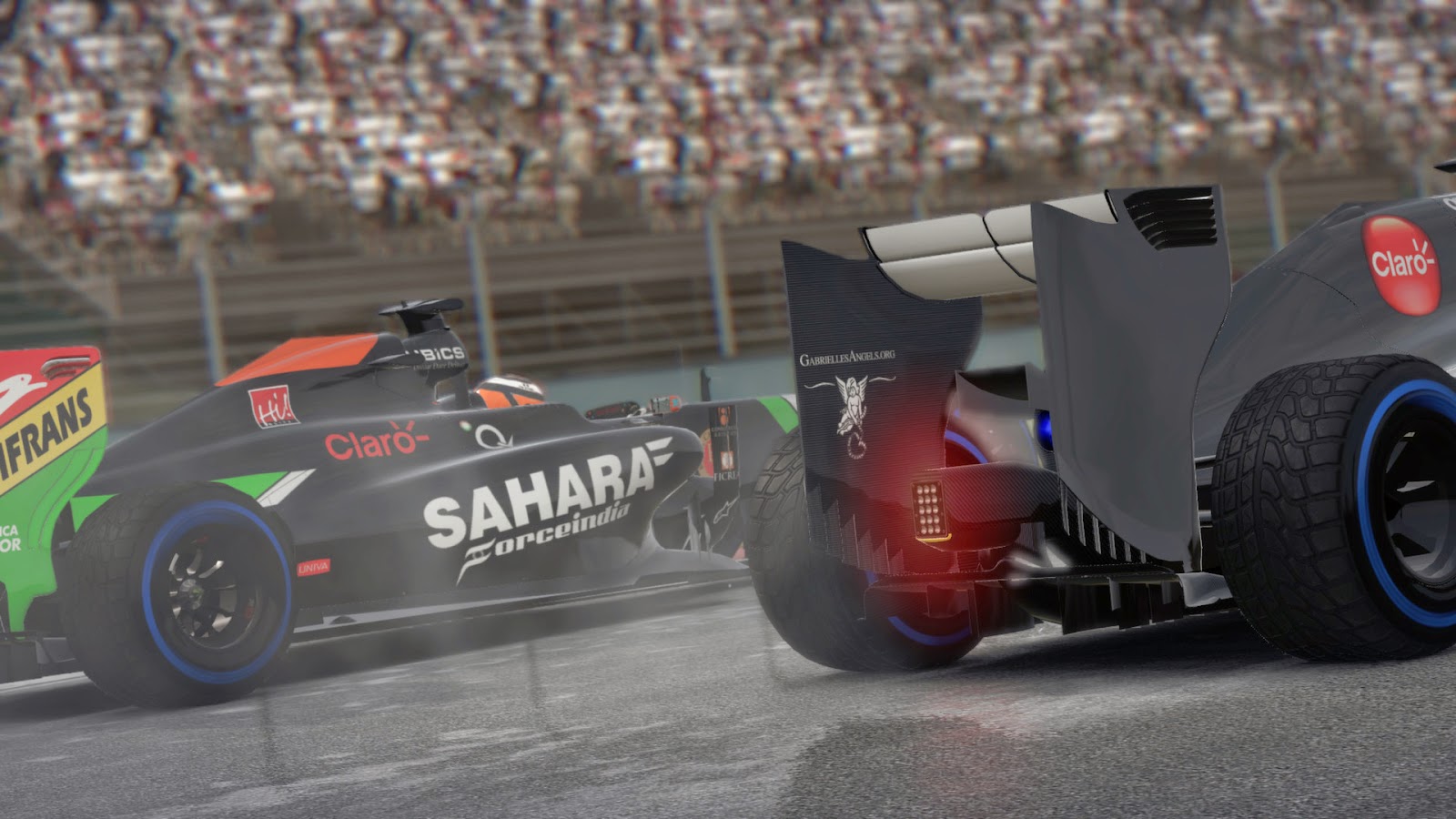 More than once I was whipping through a track with lighting that brought me back to years ago after getting my first car, driving through the early evening, as the sun nears the horizon, with the trees in the midst of their Fall coloring. Nostalgia hit hard a large number of times through the various courses that I played due to the excellent lighting. I personally find it strange this would happen, but it was welcome nonetheless. While I may sound all doom-and-gloom regarding the graphics, I cannot help but be impressed with the models and some of the textures and effects; by no means is it a bad looking game, it just has a number of oddities when it comes to hi-resolution and low-resolution textures mixing.

One of the biggest challenges I faced with F1 2014 is the driver assist feature; my 7 year old daughter could come in top 5 by just holding the go button. When the assist feature is turned up even half way you do not even need to steer as the braking and cornering are handled almost automatically. It was odd so I turned it off and even then the brakes were squishy and resistant in the same fashion that they were when the assist feature was turned on. I have played strategy roleplaying games like the fantastic Agarest series where you can essentially let the game play itself and you can just go on a ride of an excellent story. In F1 there is no story, just driving (which is not a bad thing in and of itself), but simplifying such a venerable racing franchise so much that a 7 year old can reliably place top-five is a bit much. 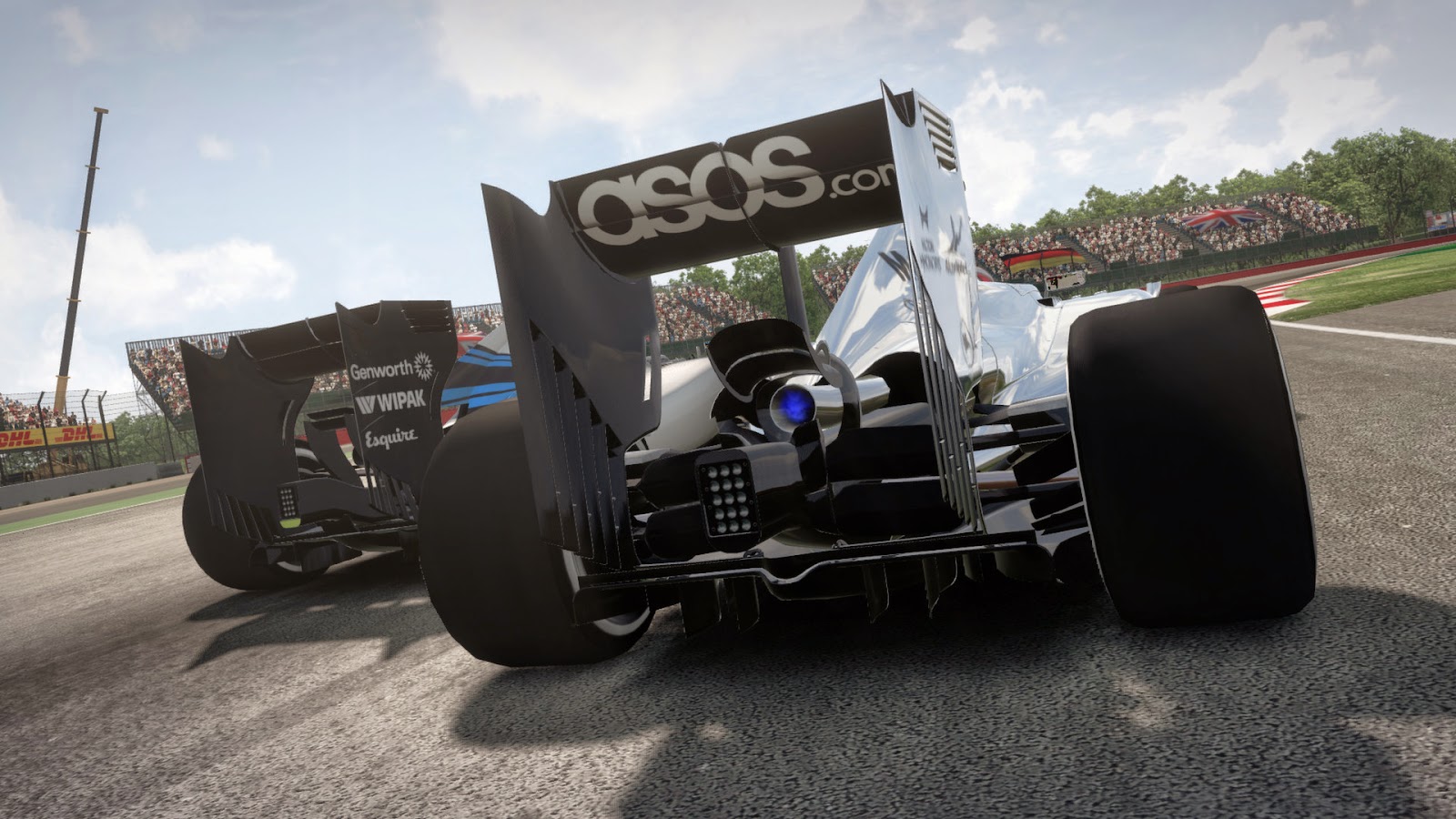 Disabling the feature helped a bit but it still seemed to want to assist you whether you wanted it or not. I was hoping that I could fly around the tracks, slipping, sliding, skidding, and careening around corners but that was not the case here. I know that Formula cars are extremely nimble and handle well (for the most part), but this seemed to handle almost too well; sort of like a video game. You may laugh or scoff at that statement but when you take into effect all of the other very real, very simulator-esque features that are available outside of the track (career management, , it lends itself to a strange, disjointed feeling not unlike the weirdness that I experienced with the mixture of textures.

At times the new “refined handling” that F1 2014 totes feels more like a way to hand-hold and reduce the more realistic and therefore more difficult handling of previous years in a way to bring in new gamers. While I enjoyed some of the assist features, my particular preference is to have a solid on/off switch which changes the way they handle (not unlike NHL 2015’s Arcade style controls or Simulation style controls). I think it would add significant longevity to F1 for me, though other racers may not be as picky about their handling capabilities.

If there was any one thing I love about F1 2014 it is the audio. Engines sound glorious as the rip through the different tracks; from the high-pitched turbo-charged sound of your engine to the scrape through your gravel, the audio is meticulously done. I think that the most impressive aspect of the audio is how clean it is; out of all of the races I did, not once did I ever feel like the engine was just “white noise” as the engines all had their own unique growl and their pitches change as drivers bank, downshift then upshift. While that is to be expected in any racing game, the audio effects in the latest iteration of F1 are superb and nearly as good as the ultra-realistic, hyper-excellent Forza Motorsports 5 sound effects. 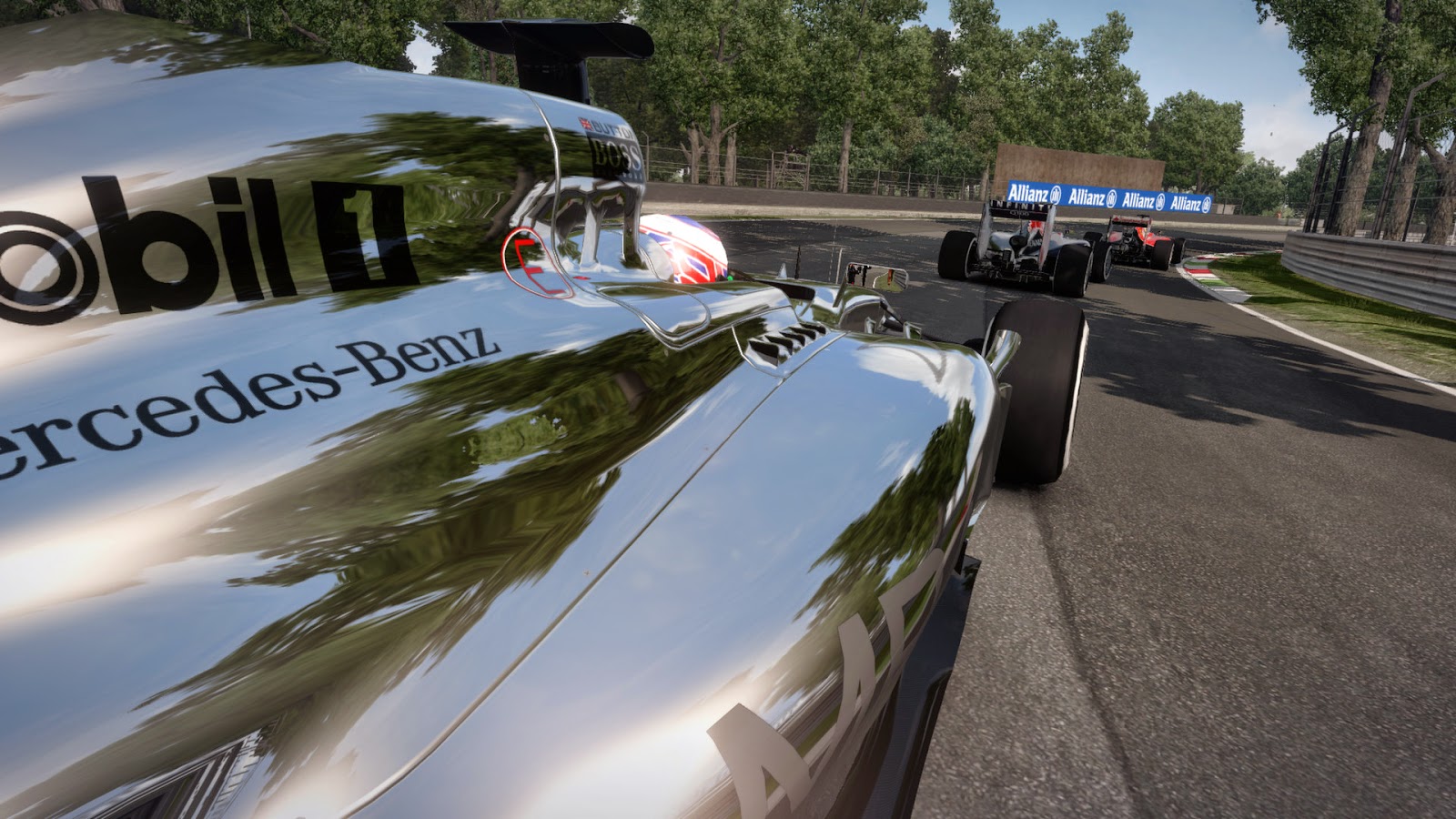 With such wonderful sound effects blaring through the speakers it does, admittedly, get difficult to hear the manager / announcer as they come over the ‘radio’ informing gamers of pole positions, laps, and other pertinent information. Due to my own lack of attention, on more than one occasion I found myself with poor performing tires or whatnot due to not hearing the audio cues. I will fully admit that I had to go back a few times and pay extra close attention to the background tracks, as I was so busy drooling over the sound effects that I never really paid close attention. I did find though, that the music is suitably “rock-and-roll” and helps to get the blood pumping for some of the more intense and heated races.

All-in-all I enjoyed my time with Codemasters’ latest entry, F1 2014 and even though there were some oddities like the never-ending driver assist and the strange mismatch in texture qualities. Given that I had not seriously invested time into the F1 franchise in many years, Codemasters’ newest entry into the series is enough to bring an old fan of racing titles back into the fold. With a little tweaking of the assist feature, F1’s new handling capabilities would be just as nice as those in the Grid series, nearing even the wonderful steering of the Forza titles but for the time being, the driver assist feature is just too much for some fans that are familiar with racing games. The biggest benefit I see to some of the new features, like the Young Drivers feature as well as the driver assist function, is that gamers that are new to the style of gameplay will have a grand time playing, as it can be very simple to rip around the track, experiencing the thrill of speed. While there are a few downfalls, F1 2014 is still a solid entry, if not the best entry, in the long F1 lineup.