TagsMagic 2015 - Duels of the Planeswalkers, Microsoft Xbox One, Stainless Games, Wizards of the Coast, XB1, Xbox One Review

Magic: The Gathering is one of those hobbies of mine that dates back quite a few years. Most of our nights playing Dungeons & Dragons started (or ended) with some hands of Magic being played among us (when we were not playing rounds of Mario Kart 64 and GoldenEye). I have started and stopped over the years, adding cards and selling some along the way. The fundamental game remains the same, despite some rules clarifications (goodbye Interrupts) and new mechanics (hello Planeswalkers). Magic 2015 – Duels of the Planeswalkers is a mostly faithful recreation of the game that does several things right over prior years, but also stumbles in a few places as well. 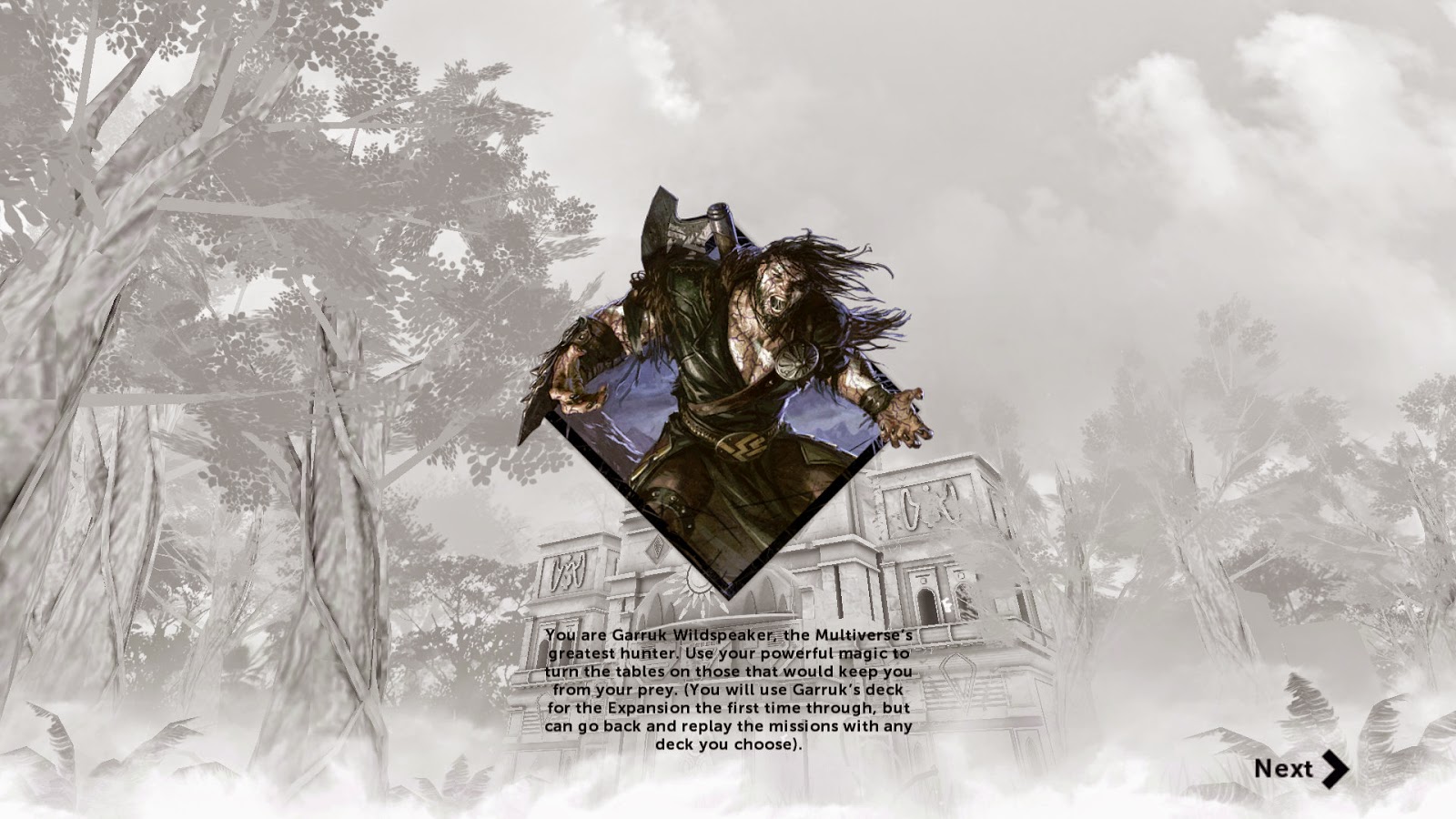 For those who are unfamiliar with the collectible card game, well – there are a lot of rules. It is not all that difficult to learn, and in fact these Duels of the Planeswalkers titles are probably the best way to go about picking the game up. That is in fact how my son learned to play. Things that I recall us debating years ago (what happens if I block with a creature and then sacrifice that creature?) are answered definitively here.

I have been covering games from this series since the first one came out and I had a chance to play it on the Xbox 360. Back then, the gameplay formula was there, but it was incredibly streamlined. Decks had almost no flexibility and my favorite aspect of Magic: The Gathering is the ability to brainstorm up new ideas for my decks. The card selection in Magic 2015 is somewhat more limited than the actual card game, but you still get to draw from the Innistrad, Theros, Ravnica, Shandalar and Zendikar sets.

Most impressive is the full deck editor. The Planeswalkers games always did a solid job of providing games to be played (the number one reason I do not actively use my real cards anymore is a lack of opponents outside of my son since we moved) because of the always available AI opponents or the ability to log online and challenge a human opponent. However, the deck editing was often very limited, with options on specific cards from different styles of decks or limited lands that prevented players from really being creative. That problem is gone as true deck building finally makes its way to Magic 2015. The selection of cards is solid and the deck editing tools give a plethora of sorting options for those who really want to brainstorm creative ways of taking out their opponent. 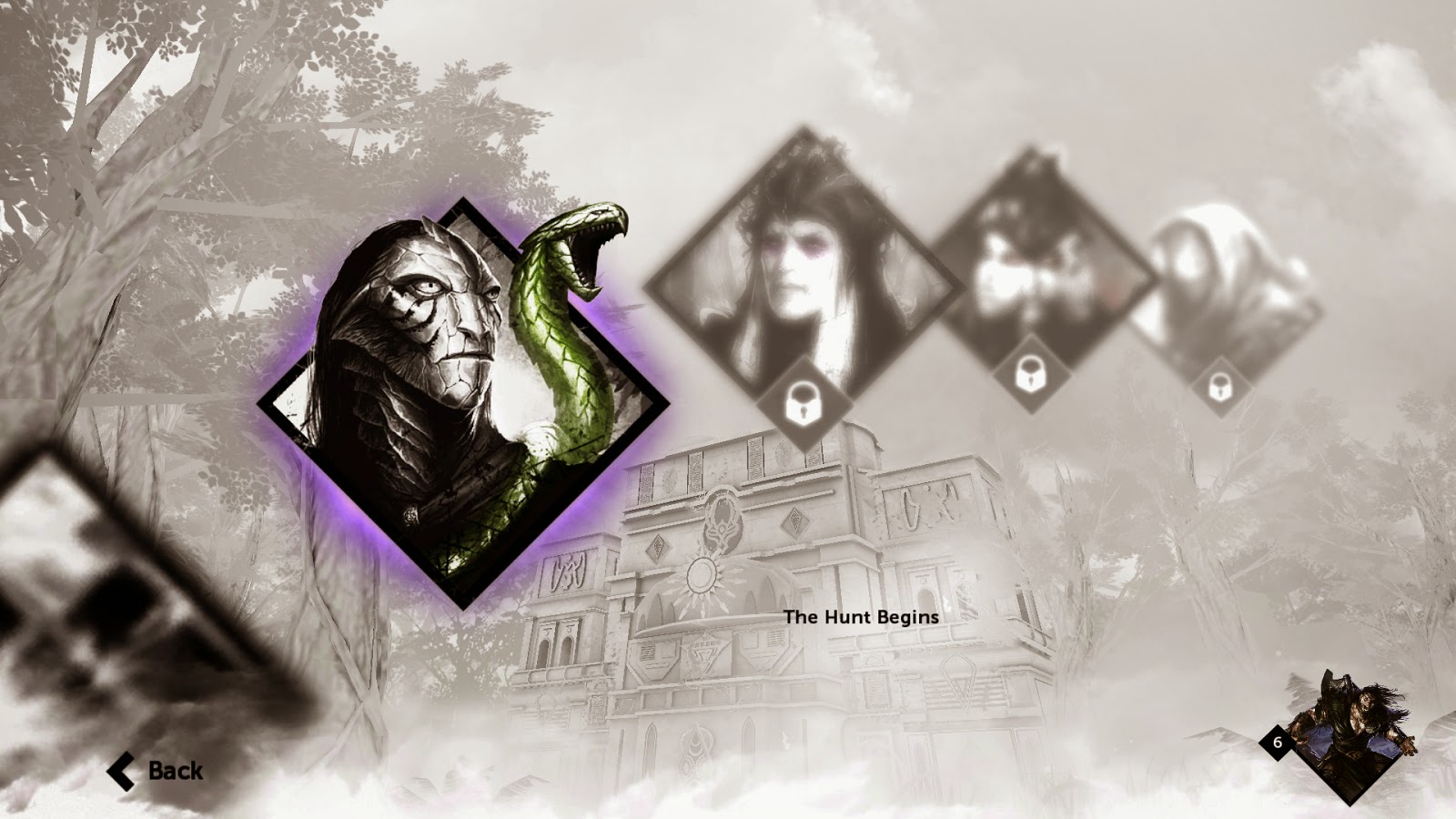 Another major win for Magic 2015 goes hand-in-hand with the deck editing, but there is a new found focus on multicolor decks. In the past mono decks around a specific theme was the focus, but now your starter deck comes in two colors right off of the bat. This can lead to some strange themes that feel a bit underpowered compared to others (I have gone with red/blue and also black/green to start), but the ability to earn packs of cards with each victory helps to channel the fun of ‘cracking packs’ as my wife and I like to call it. I have long been a collector of sports cards and collectible card games, so the anticipation that comes with opening up a new pack of cards is an alluring hook for me in particular.

One of the aspects of the prior Duels of the Planeswalkers games that irked me were the fights leading up to the bosses. These fights were scripted, meant to teach players a specific or new way of looking at their cards and the game’s mechanics to advance. However, the true element that makes Magic: The Gathering unique every time is the randomness of one’s hand. These matches lacked that, so I was thrilled to see that Magic 2015 had actual random hands again for all of the AI opponents.

Less awesome is the boss fight with Garruk, because you have to fight him and one deck the first time and then roll right into a ‘new’ form – complete with a new deck. Beating him the first time around is not terribly hard, but his second deck can get rolling very quickly and if you couple that with a bad start of your own, it means you lose and have to go back to fighting his first form. Again. And likely again. And probably at least one more time before the Magic gods favor you enough to get two really strong hands in a row. 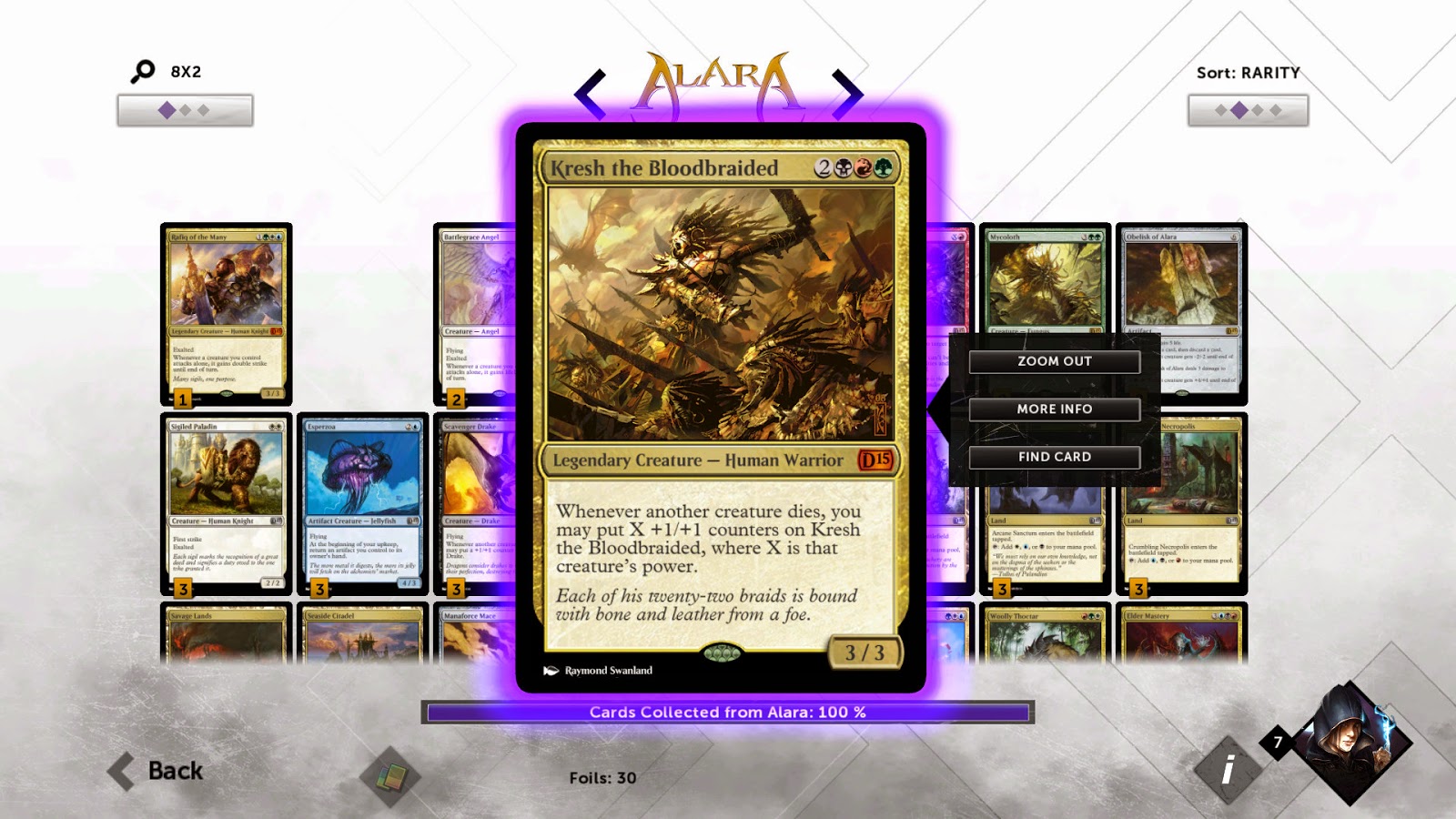 When Magic 2015 first released on other platforms, it was derided for its pay-heavy model for purchasing more packs of cards with actual money. When Parker reviewed the title for PC, it was one of the items he talked about. While I certainly do not begrudge companies for microtransactions, what really aggravated many players was that the best cards were hidden behind this pay barrier that could not be earned just through gameplay. The latest expansion remedies this by making all cards acquirable now. This is a big step forward for the game and makes opening virtual packs all the more rewarding.

As for the expansion, Garruk’s Revenge – it is fun while it lasts. The downside is, it does not last very long. If you were among those who spent real money on the Complete Bundle, Card Collection Bundle or any of the Premium Boosters before 11/5 of this year, Garruk’s Revenge is automatically added to your account. For those who spent $20 or $40 to get behind the walled content, the five dollar expansion might not feel like the greatest consolation prize, but if you are new to the game – or just now picking it up for Xbox One – it is worth noting that all the cards are available and that the expansion brings dozens of new cards to the table.

The single player campaign levels are brief, with a tough but still fair boss fight (unlike Garruk’s second form). One interesting take is that your first time through the battles, you get to use Garruk’s green deck. It is pretty beefy and I played through all of the available levels pretty quickly. You can continued to wander Alara – the new plane – and gather more of the cards, which do have a heavy multicolor focus to them. 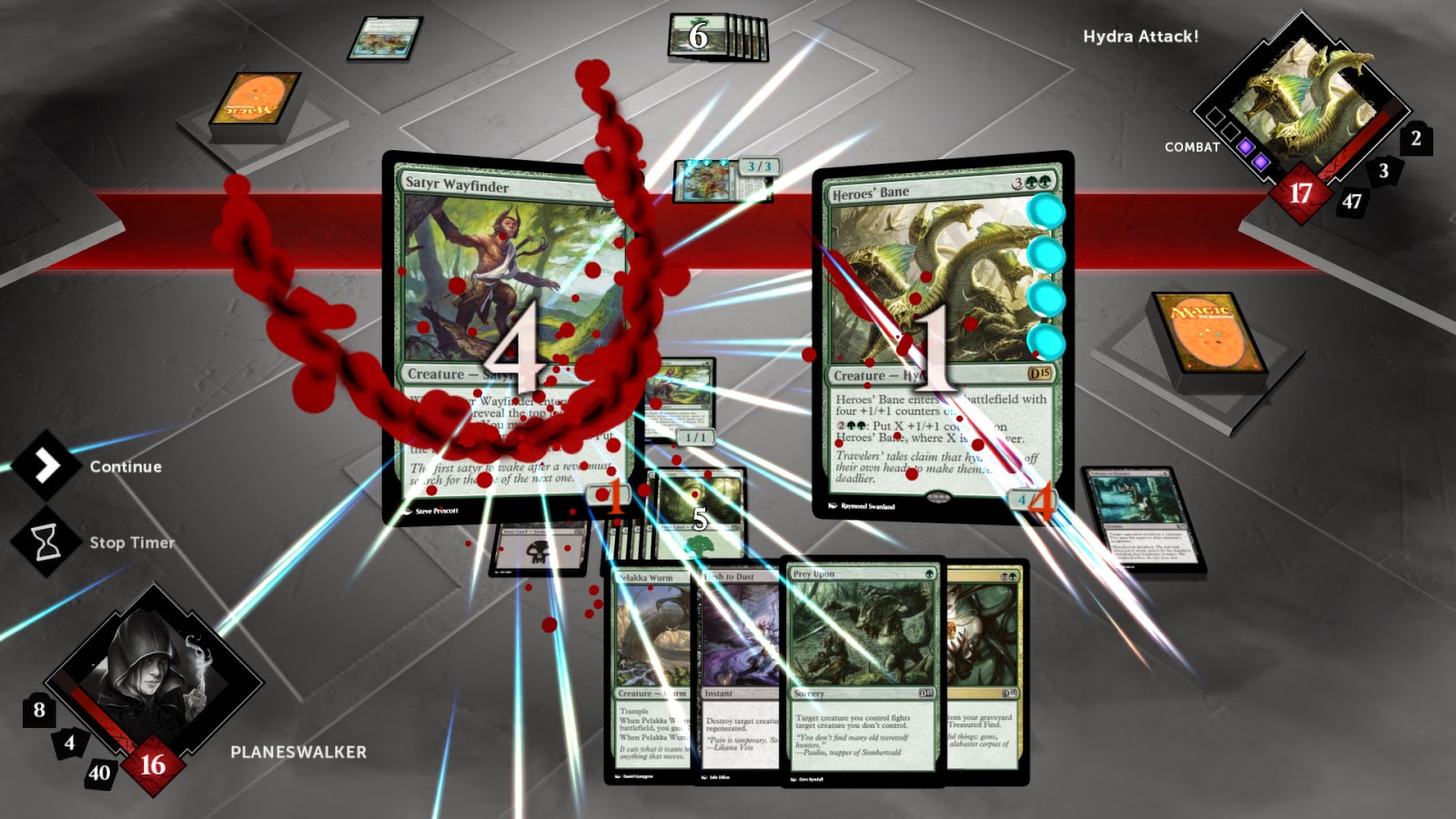 It would have been nice if the expansion had addressed the one remaining weakness in the original Magic 2015 title, and that is the lack of game modes. In past years we were treated to modes like two-headed giant, sealed play and archfiend. Those extra modes do not show up in this game. There are still plenty of multiplayer and single-player options, and I usually prefer the traditional game over variants, but it might be nice to see other multiplayer options like Commander or Emperor eventually make the cut.

Removing the pay wall from the best cards was a great move before releasing this version of the game. Magic: The Gathering has never looked or sounded better, with lots of particle effects, shiny foil cards and subtle but fitting music that help to set the tone. One oddity is that the Xbox One should be able to handle this game without any issue, but there are moments of lag and framerate stutter that I cannot explain except to suspect poor coding. Cut scenes also look great as it feels like the developers at Stainless Games really wanted to do something more with Magic than just play the card game, but help to create a narrative as well. There are some flaws to the packaging, but the overall game experience is still enjoyable to fans of the game. Newer players can learn how to play Magic more effectively than ever while veterans finally have proper deck editing that they can sink their teeth into.