Games based on existing IPs are always a gamble. Sometimes they have such great backstory or characters that development teams are then able to run with successfully (Batman, some of the Transformers games immediately come to mind). Others are absolutely horrid, broken, buggy titles that feel incredibly rushed (just about every non-Spider-man and Batman superhero game). Most tend to fall into a middle range where they feel slightly undercooked. Playable, fun if you check your brain at the door, but hardly qualify as good use of their license. Power Rangers Super Megaforce falls squarely into this category as it fails to do anything terribly new with the source material or innovate gaming in any particular way – but it is not a bad game either and can actually serve to help kill several hours of time on your 3DS.

Probably the biggest disappointment to be had here is that there was actually quite a bit of potential to be had. A handful of systems were put into place to help make Power Rangers Super Megaforce slightly more than just a simple brawling game. If just a bit more time and care had gone into these systems, the end result could have been an addictive title worth coming back to repeatedly. As it stands, it is basically fun filler in small bursts. Kids will probably get more out of the experience than teens or adults who would like a bit more to sink their teeth into. Brawlers are a somewhat simple genre by nature, and the team at 7th Chord seems to understand the need for a bit more substance, it just is not quite there yet. Still, this is latest iteration in the series and a more enjoyable experience than the earlier games, so it feels like the franchise is actually moving in the right direction. 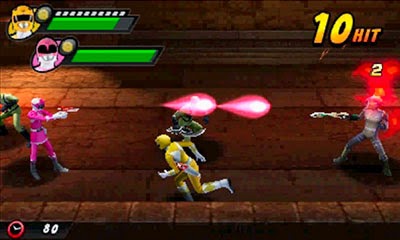 The leveling system is both where the team probably could have made the biggest impact on the game, but instead feels like the biggest whiff. Brawling titles with leveling mechanics give you a reason to come back and play over and over again. If the mechanics lead to new skills or let you customize the character in some fashion, it would be a good deal more engaging, but unfortunately each level just carries with it a couple of standard stat increases. However, for those who do like a good grind, plenty of levels can be had here, and smartly your AI partner increases right along with your controlled character.
The AI partner is another interesting pat of the equation. With a handful of simple commends you can issue to him or her, this partner fights along side of your chosen ranger. While the rangers have slightly different appearances, they tend to handle in very similar fashion. Essentially you will melee, get in close and try to defend. If either your character or your AI partner falls in combat, then it is game over. 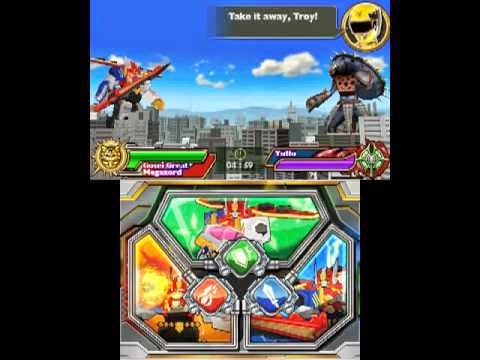 Each series of levels culminates in a final showdown with lumbering Megazoids going toe-to-toe. This part does introduce a change in the control as it uses the touch screen to trigger off specific attacks. It is a nice break from the side scrolling brawling action, though something with a bit more strategic depth would have been nice. Maybe the right call is to stick to action-based gaming, but it feels like those end levels could have been something more.

One of the coolest aspects of this latest release is that it calls back to earlier years of Power Ranger history with some bite-sized unlockables and characters that can be opened up along the way. This does offer up a nice reward structure along the way, though greater variety in the characters and how to develop them would have gone further with making this a really interesting hook to bring a person back over and over again. 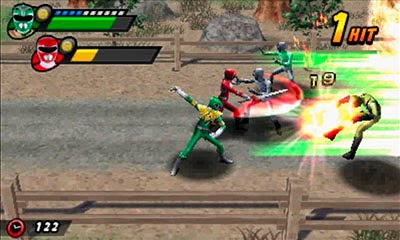 Visually and musically the game is actually pretty solid. The Rangers and their enemies look good (though there is no real 3D to speak of here) and moves well enough. As one would expect, the colors are bright and vivid, with plenty of blasts and combat moves. The controls feel pretty precise, so all in all it is a perfectly solid brawling game that has a bit of fan service and some interesting mechanics that really could have elevated the experience with just a little more time and attention.

I have played some of the other prior games in the series, and this was by far the best in the series. Not a great game by any means, but average with the potential to be better. It feels like the series is moving in the right direction and seems to have some good ideas to build on. In the meantime it is simply a shallow experience with a few extra distractions along the way that will probably appeal more to young kids who are fans of the show than older gamers looking for a little more meat in their game.