I grew up using mechanical keyboards as membrane-based keyboards had not yet become a popular alternative due to ease of manufacturing and a decidedly quieter working environment. When I built my first computer back in the mid-90’s I picked up a membrane-based keyboard from a local computer shop for near on $50, and this was a basic, 104-key PS/2 keyboard. Nothing special, just a simple keyboard and I used it for years until the USB-based keyboards became the “it” thing. Along with the newer connection, USB-based keyboards also brought with them multimedia controls, allowing users to play/switch music or video tracks, change the volume and even assign favorites keys.

As the popularity of USB-based membrane keyboards rose (and their prices plummeted), the mechanical keyboard fell into a niche market that was aimed at heavy typers in fields like journalism, all manner of legal positions (from paralegals to attorneys), and in a number of development positions. While membrane-based keyboards are cheap and quiet, they do not hold up to the abuse that authors, journalists, and other type-heavy industries can place on a keyboard.

That is where mechanical keyboards come in as the reigning champions; a majority of the mechanical keyboards out there will have the capability to withstand millions of key presses. In recent years the mechanical keyboard has made a glaring comeback due to the ability to withstand abuse, the high level of customization, and the fact that keyboard technology allows for on-board macro settings / creation. Tesoro, a brand here at Chalgyr’s Game Room have reviewed a number of times before recently sent me their LED back-lit Excalibur Mechanical Gaming Keyboard for us to test and my first impressions are love at first site; for more information, read on! 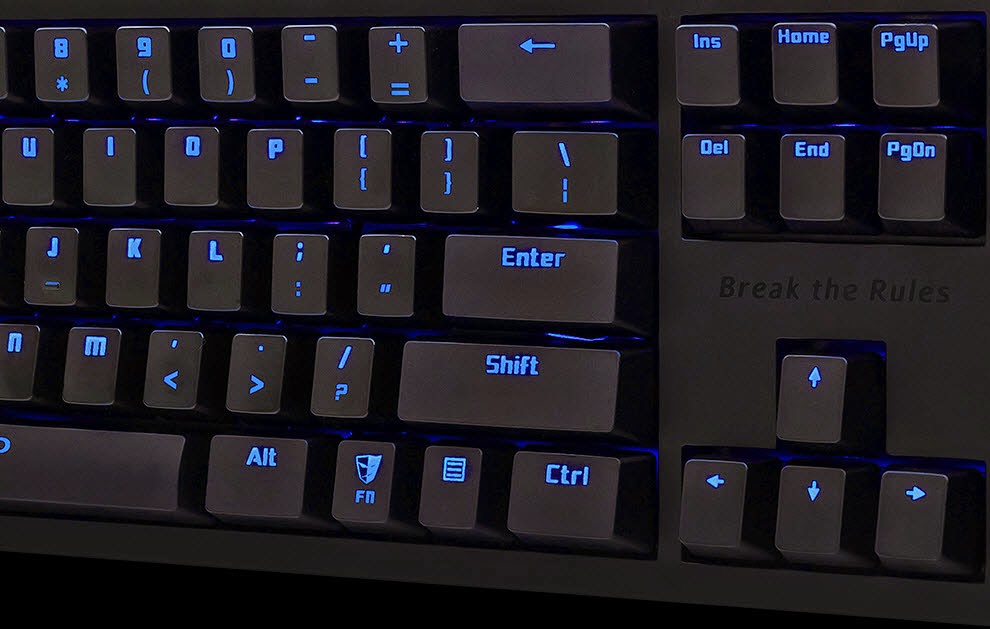 To start, most mechanical keyboards are simple and to the point; offering 104-keys in a standard layout (i.e. not an ergonomic or ‘wave’ design) and a handful of function keys that give a user volume control, the ability to pause playback, or to skip forward / reverse in a playlist. The Excalibur is no different with the exception that there are a few Tesoro-provided macro keys that will change the gorgeous blue backlighting for the keyboard. There are a handful of different options for backlighting, from the standard “Gamer” layout that has the WASD keys, the Spacebard, Enter key, Arrow Keys, Tesoro Function Keys and parts of the number pad lit up.

Other settings will include the aforementioned keys, but also includes the 1-0 keys at the top of the keyboard as well as the Tab, Caps, Left Shift, Control and Alt keys. In addition to those gamer-centric schemes, you can have the full keyboard lit up (which is how I use it, given the low-light environment that I work in) at full brightness or slightly-less-than full brightness, or you can disable the illumination altogether. Outside of the lighting, the overall design is identical to your standard USB keyboard as it features a simple, no-frills matte black finish.

While you can go through and create macros without the use of the provided Tesoro Excalibur Gaming Keyboard UI, I found that using the software to assign macros was far easier. For me personally, being able to see what it is that I am doing when it comes to creating macros, rather than hoping and guessing that I did things right; I may type for a living but I still make plenty of mistakes (seriously, my backspace key is used just as much as my spacebar) and I did not want to risk flubbing the macro assignment. The software for the Excalibur is similar to Tesoro’s other software meaning that it is extremely flashy and little slow to apply the changes but extremely easy to use (http://screencast.com/t/k4RL7wcYxF9r). Once you have your macros set up and your lighting ready to go, it is time to get to actually using the keyboard. 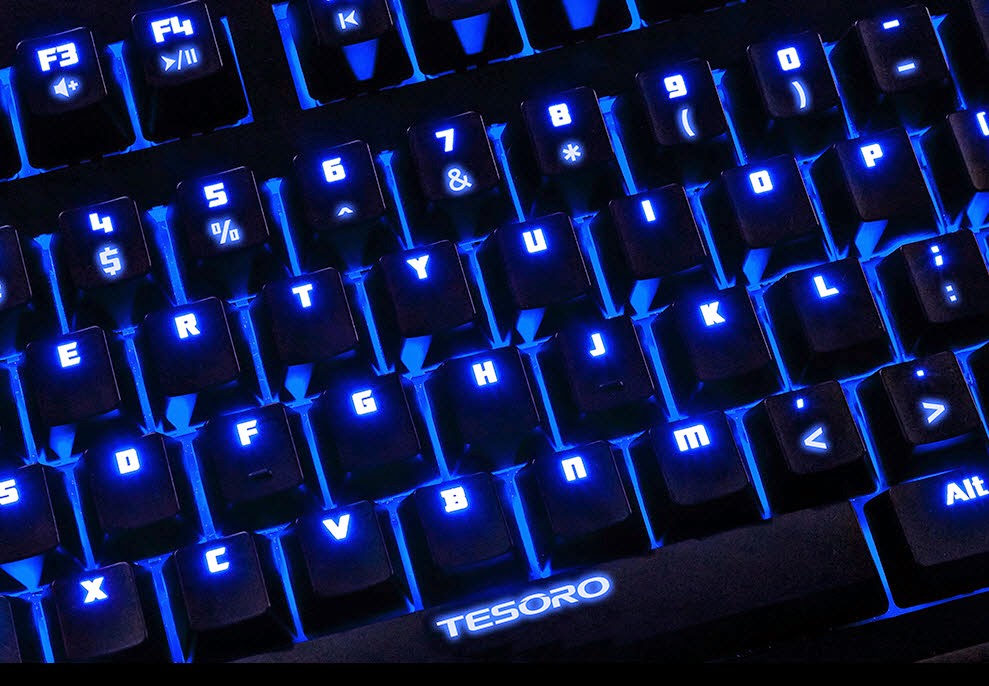 Unsurprisingly the clickity-clack of the keyboard is the most alluring sound I have heard out of a peripheral since I first used the SteelSeries Siberia Elite Anniversary Edition headset. The Excalibur has the Kailh mechanical switches in it, while not the more commonly known Cherry MX brand, the Kailh switches have been around since 1990 so they are durable, reliable, provide excellent feedback and have a very long history. The switches in the Excalibur are very similar to the Cherry MX Blue switches (so much so that I cannot tell the difference between the two, though I am impartial to the Excalibur since the *click* is more satisfying), which provide a bit more tactile feedback (not to mention the clicking is sweet, sweet music to my ears) and are extremely easy to work with. Not overly sensitive like Cherry MX Red or Black switches and not dull and plain like the Brown switches, the Excalibur’s switches are really the bee’s knees when it comes to mechanical keyboards and I urge everyone on the planet to switch their keyboards to similar mechanical switches.

Seriously, they are a joy to work with. The anti-ghosting capabilities as well as the N-key rollover features are wonderful I have yet to experience an issue while I slam my bacon-grippers (those are my hands) on the keyboard as I am furiously trying to run away in games like Team Fortress 2 or Counterstrike: Global Offensive. On my other keyboard, a splendid Microsoft Ergonomic 4000 keyboard, I would run into the issue that I could press all of three keys at once before the keyboard started to go on the fritz; happily I can lay my arm across the Excalibur and each and every key is interpreted and shown on-screen (when typing) or I will press a number of hotkeys at once in World of Warcraft or Diablo III and my spells / attacks will fire off without a second thought. The speed and ease of use is both a welcome change from membrane keyboards, and a splendid feature of a low-cost mechanical keyboard.

After dozens of hours of gaming and even more hours spent typing, wrist/finger fatigue is non-existent, though my old and decrepit arms do occasionally hurt given the lack of ergonomics (I would seriously pay loads of money for a mechanical ergonomic keyboard that does not suck), though it was far less than I imagined and it would only happen after 12 to 13 hours behind the keyboard. For less than $100 USD, the Tesoro Excalibur G7NL Mechanical Gaming Keyboard is by far one of the best investments a budget-wise gamer can make on a bona fide gaming keyboard.