Interestingly my game of the year landed just before the end of the year. Talk about going out on a high note. There have been a number of really good RPG games over the last couple of years, but Dragon Age: Inquisition with its massive world, interesting story that grows better over time and plentiful choices that feel impactful make this a game that is easy to lose hundreds of hours in. I realized that about seventy hours in I had only done about half of what Dragon Age: Inquisition had to offer – and I was already wondering how events might play out differently if I had been using a different character who made vastly different choices. For all of the praise that has been heap upon Dragon Age: Inquisition, it is worth noting that it is not a perfect game. For starters, the story gets off to a rather bumpy start. It tries to pick up after the events of the second Dragon Age (a title I enjoyed more than most people, despite its own shortcomings), but does so in somewhat clumsy fashion. You have no idea what is going on and even introduces the over-used amnesia trope (though thankfully only in regards to some specific events).

Then Inquisition releases you into the wilds of The Hinterlands. It is a beautiful, sprawling area that feels about as large as the entirety of Dragon Age 2 (I said I enjoyed the game, but it was far too narrow in scope). Side quests abound and exploration begs to you as more and more of the map slowly becomes visible and new points of interest dot it along the way. Sometimes you are just looking to put down a flag in some sort of a specific location (that is often quite scenic and beautiful). Other times you are closing a rift dropping demons out of it. Sometimes there are scraps of paper on the ground that lead to other quests. There is so much to see and do that players could feel a bit overwhelmed.

The other questionable design choice in the first zone is that it is not clear that you are not meant to beat it in a single visit. The landscape is so expansive, with shops and plenty of places to see and people to interact with that one could easily stumble onto rifts and even a dragon and smaller dragonkin and mistakenly think that you are meant to beat all of them right away. In truth Dragon Age: Inquisition continues to grow over time. There is a village that starts as your central hub that eventually gives way to a fortress your Inquisitor calls home later. These hubs give you even more options, such as conversation with important characters, more shops and most importantly, a war table where your council joins you in unlocking more ares and quests. 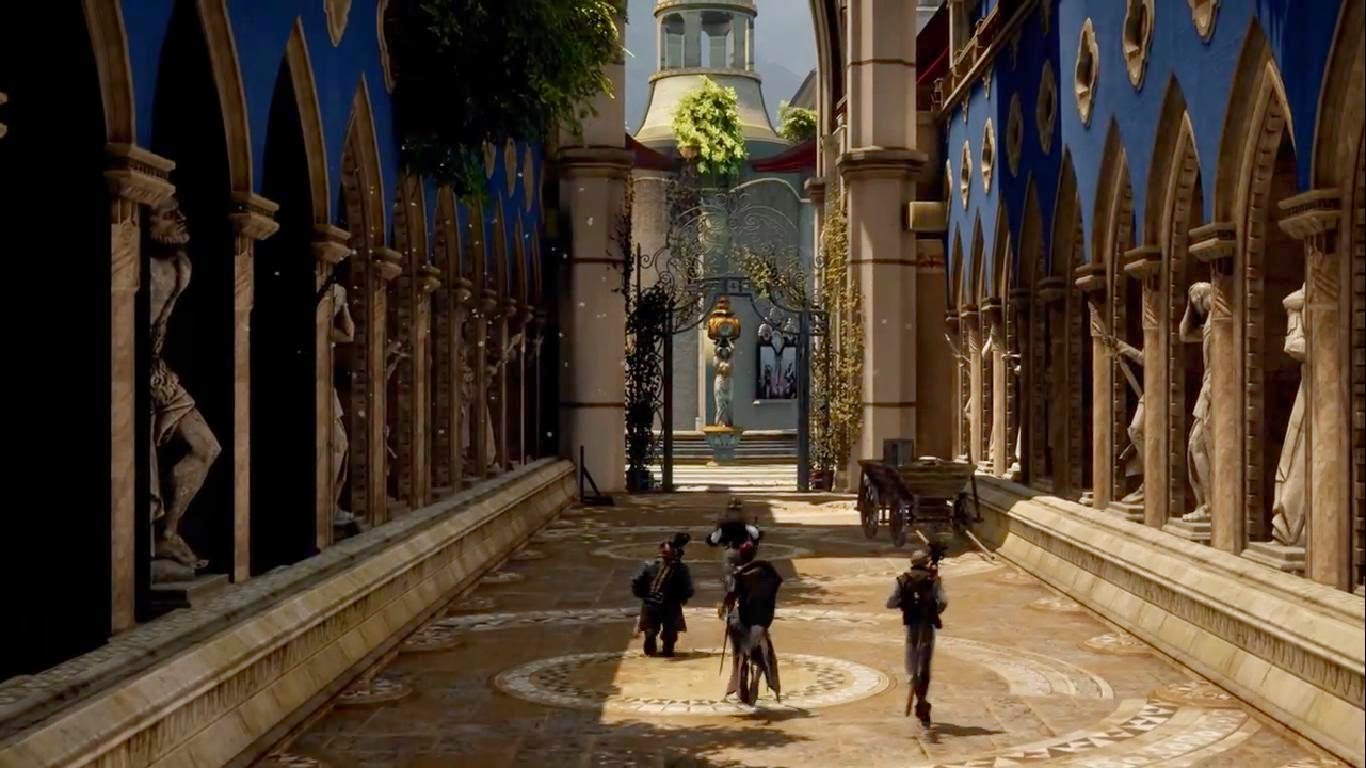 That is when you realize that The Hinterlands are only a portion of the puzzle and that areas are meant to be visited on multiple occasions as more quests are presented. Just because you completely cleared everything The Hinterlands has to offer does not mean you might not come back later to recruit another character or help finish a companion’s personal quest. If this learning curve and the initial story were handled a bit better, Inquisition would be a far more friendly title for gamers to sink their teeth into.

Thankfully for those who spend their time learning their way around all of this, Dragon Age: Inquisition reveals itself to be a tremendous game with almost too much to do. Some zones fare better than others. The desert ones did not appeal to me nearly as much as the dark and rainy Storm Coast, but all of them are beautiful graphically. I read another reviewer state that the gorgeous visuals of Dragon Age: Inquisition had them wishing BioWare would go back and give a similar treatment to the earlier games in the series. Given how popular remastered versions of games have become, I would not be surprised by that – especially given talk of a Mass Effect collection for the PS4 and Xbox One swirling about over the last month or two.

For all of its beauty and quests, the Dragon Age series has always been more about my companions and the adventures they are on. This is certainly a unique cast of characters, from the somewhat predictable Cassandra who serves as the knightly member of the party to Cole, who can come across as somewhat insane at times. Some of these characters feel a bit more fleshed out in purpose than others, but their distinctive personalities help drive the enjoyable banter and conversations that take place over the course of the adventure. They might never reach the heights of Alistair and Morrigan did (my favorite line was probably from Morrigan: We now have a dog and Alistair is still the dumbest one in the party.) for me in how funny their verbal barbs were in Dragon Age: Origins, but Inquisition certainly has plenty of its own memorable dialog. 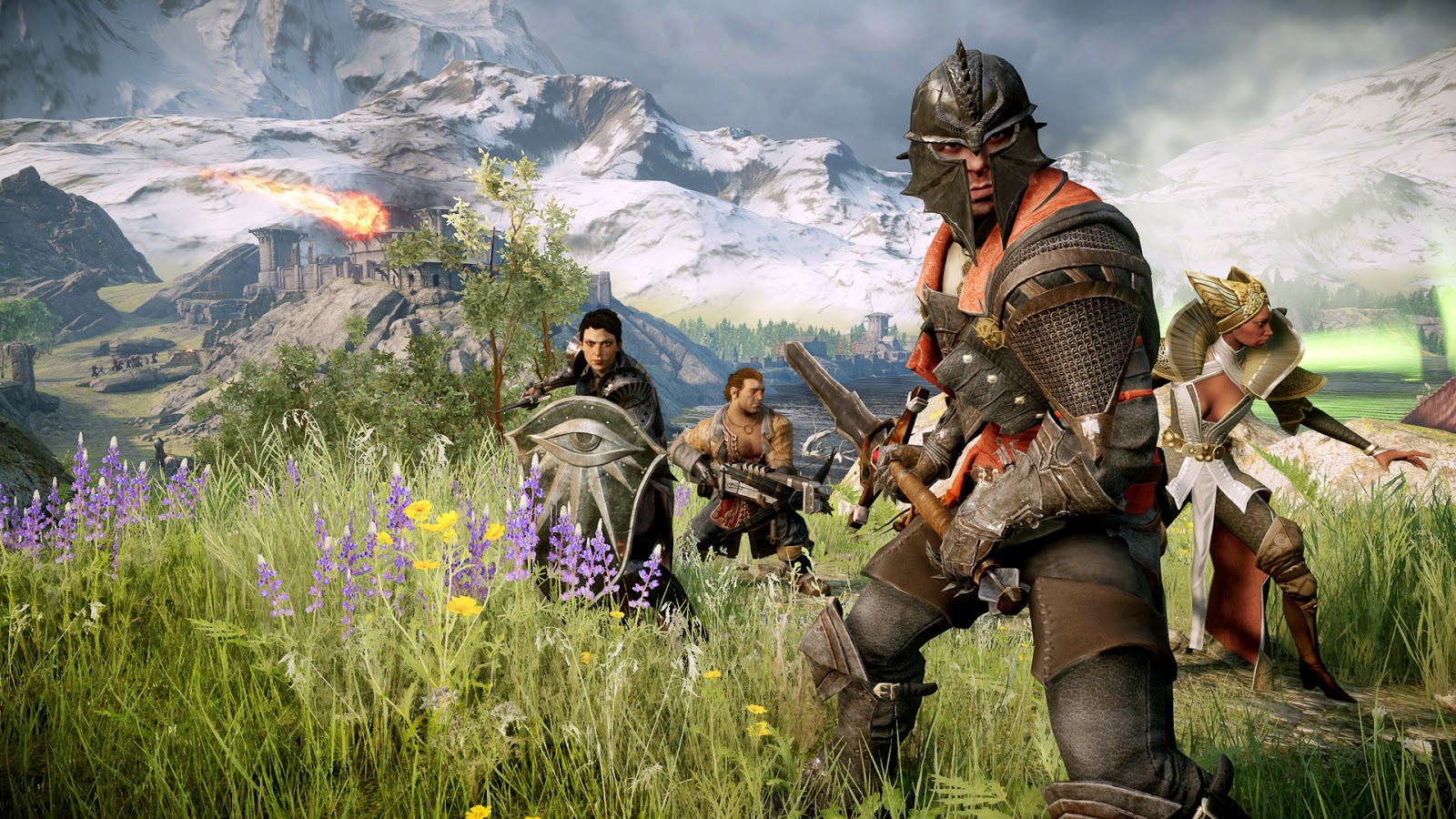 One of the trends we have seen in other games recently is that the world seems to have a great deal going on that is not necessarily scripted. Come upon a rift and you know that you will be encountering spirits. However, venture through the wilderness and you might see a bear tearing into a fox, only to later see that same bear encountering a troop of soldiers that engage it. You can stand by and watch to take out the weakest, go about your business or burst in and fight them all – it is entirely up to you, but moments like this make the world feel even more alive than most RPGs.

This is aided by intelligently written quests. Certainly they still comprise the typical ‘kill this’ or ‘find that’ objectives most games adhere to, but most of these quests feel organic to the world. Unfortunately more often than not, the person you have been sent  to find is dead and you are just returning with some possession of theirs as proof for the quest giver (which is probably better than a boatload of escort quests – I hate those in most games), but there is a story behind almost every one of them. In fact there is a great deal to read and listen to if you take the time, adding to the feeling that BioWare has absolutely nailed making Inquisition’s world feel like a huge, living place.

One of the few things about Dragon Age: Inquisition that did grate me wrong was how clumsy combat and travel felt at times. There is an interesting mesh of styles available to combat here. You can pull up an overhead map that allows you to issue orders and treat combat as  a more tactical experience (more akin to Origins on the PC), but I really only used this when I noticed a teammate was down and I wanted to find them easily for a quick revival. The majority of the time, combat is centered on getting close to an opponent and performing an action. Holding down R2 will have you lashing out with multiple attacks in a row. My dagger-wielding rogue was a bit less accurate than a mage who can hit with spells from range. Some special skills (those with an area of attack where you get to place the area of effect) do pause combat as does bringing up the radial menu for things like potions, but the combat still feels somewhat clumsy. 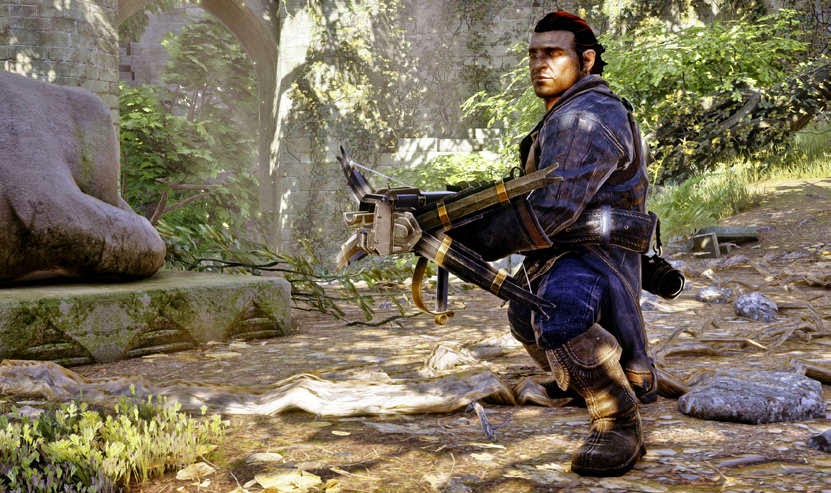 More challenging is the jumping mechanic. Instead of just anchoring characters to the ground, there is an impressive amount of vertical level design at play here. Some zones use this more than others, and it again helps to make the world feel like more than just a flat map you move about on. There are times when I feel like the level design is ingenious. An example that comes to mind is a zone with burning homes and some loot to be had on the roof of one of the buildings. You use fallen pieces of structure to scale up to the roof that would be otherwise inaccessible.

However, Dragon Age: Inquisition is most certainly not a platformer. Yet, there are areas of the game where it feels like it want to be – even if for just a few moments. One early example is a shard in The Hinterlands that requires you work your way up a large section of rock jutting up from the earth. There are platforms ringing the rock in a slightly spiraled design that require some pretty careful jumping to make your way up. In another zone there is a landmark flag location that looks like it should be reachable from the front, but only after trying unsuccessfully for several minutes did I realize I had to travel all of the way around to a different stony structure, make my way up it there where there are more agreeable jumps and then cross over using a narrow beam. In other places, what is clearly meant to be a game mechanic can be passed up by just trying quirky jumps repeatedly. One example of this is a zone with a pair of gates that can only be opened from the inside. You are meant to complete some smaller quests and to work your way around through a tunnel that leads into that area. However, if you use your mount and time it just right, you might be able to skirt over the edge of one of those doors, breaking that intended quest chain and just opening things up prematurely.

None of the above scenarios is a deal breaker, and I did generally appreciate the freedoms the game provided for my exploration. That being said, there were times when these issues did creep up and they felt almost like padding or filler (spend ten minutes trying to figure out a way up here!) instead of something that was actually meaningful. That feels unnecessary in a game this big with so many other things to do, but frustrating for someone like me that enjoys collecting every last thing possible along the way. 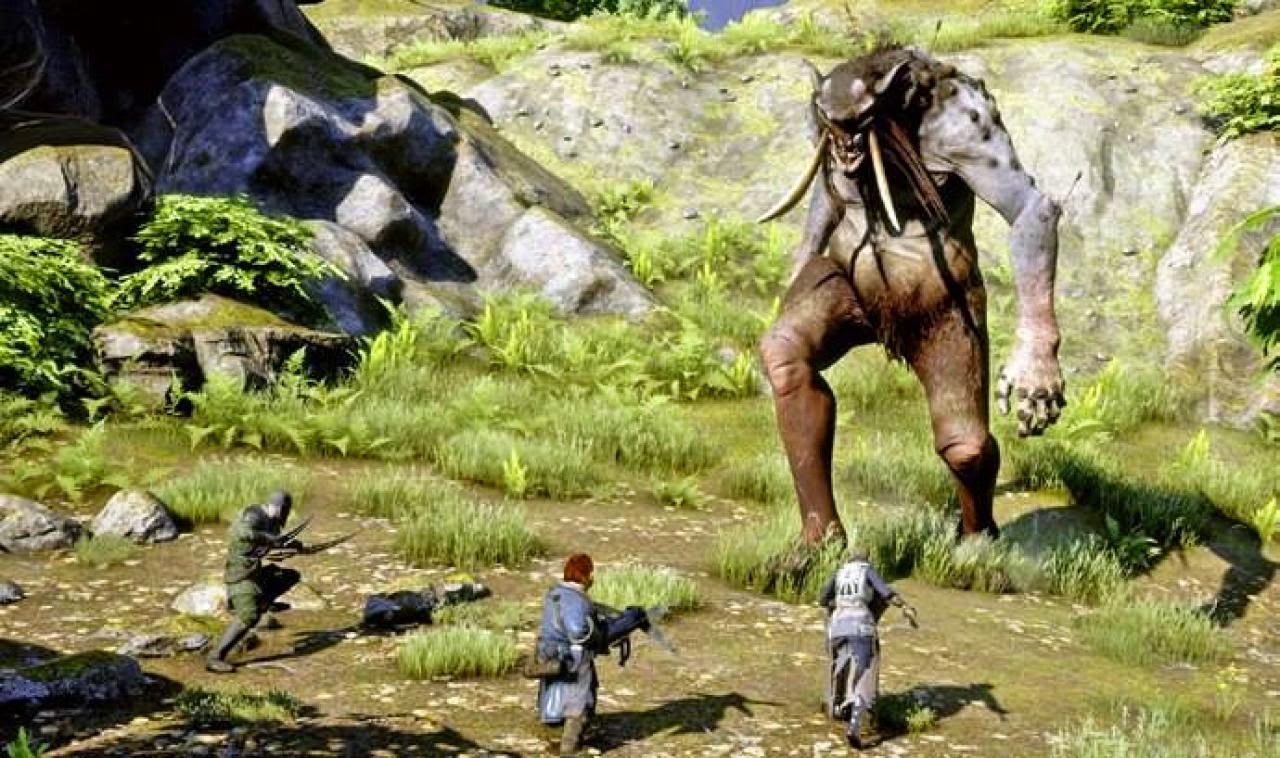 Just as the Mass Effect trilogy saw the series evolve from being a clear RPG with action elements to a game that was a more even mix of the two, I get the impression that Dragon Age: Inquisition is attempting to move in that direction as well. That is not a bad thing, but both combat and exploration are two areas where some additional polish would be helpful in future iterations.

Those are relatively minor quibbles however, when compared to the complex enormity of what Inquisition has to offer. The story get stronger the further you go in, and while it does once again make the the savior of all (similar to Dragon Age: Origins), the tale was enjoyable despite some familiar territory. That was one of the things I found enjoyable about Dragon Age 2 – that Hawke certainly was important and mattered to people, but on a far smaller, more intimate scale than what either of the other two games did. That is not to say one style is better than the other, but that I could appreciate the differences between them.

Dragon Age: Inquisition was a title I was excited to play this year – and unlike so many other big name titles released in 2014, this one did not disappoint me. Things got off to a somewhat rough start, but the ship was righted fairly quickly and the game that Inquisition turned out to be proved enormous and engaging – and quickly became my vote for game of the year in 2014.