comments Share
You are reading
Dungeons & Dragons: The Rise of Tiamat – Tabletop and Board Games Review

TagsDungeons & Dragons, Hasbro, Tabletop and Board Games Review, The Rise of Tiamat, Wizards of the Coast

The newest installment of the recently rebooted Dungeons & Dragons experience has come out, and while we are still waiting on that final Dungeon Master’s Guide (releasing next week), we had a chance to take a look at the second half of the Tyranny of Dragons. All in all, The Rise of Tiamat feels like a fitting, challenging follow-up to Hoard of the Shadow Queen. 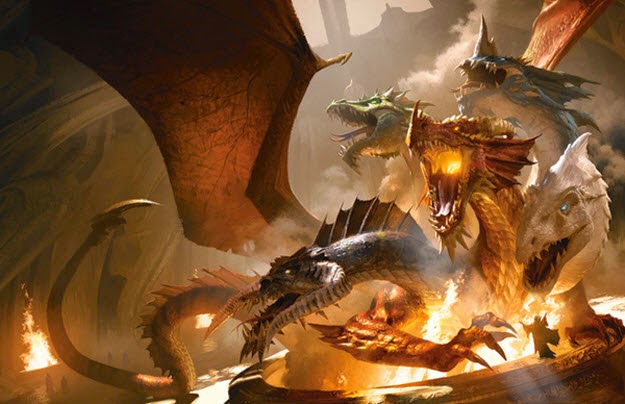 While the core books often serve as guidelines to tabletop play, these themed modules are usually a good deal more focused. The good news is, the DM has a bit less work to do because the general encounters, equipment and storyline have already been drummed up. Sometimes however (frequently, actually), players go off-script and muck up even the best laid plans. One of my favorite aspects to this campaign however, is it was designed with those deviations in mind. Players can (and probably should) die along the way, and there are multiple opportunities for diversion on the way to the story’s excellent conclusion. While The Rise of Tiamat does have a few flaws, the overall adventure is worth embarking upon.

While technically this title can stand alone, it works so much better if the players have had a chance to play Hoard of the Shadow Queen. The events are intertwined and really, the characters feel like a natural progression from one campaign to the other. I had some concerns about the quality of Hoard of the Shadow Queen, but it feels like a bit more time went into The Rise of Tiamat. The same sort of build quality is there: hardcover with nice pages that do not feel quite as durable as the core manuals but certainly durable and pleasant to look at. 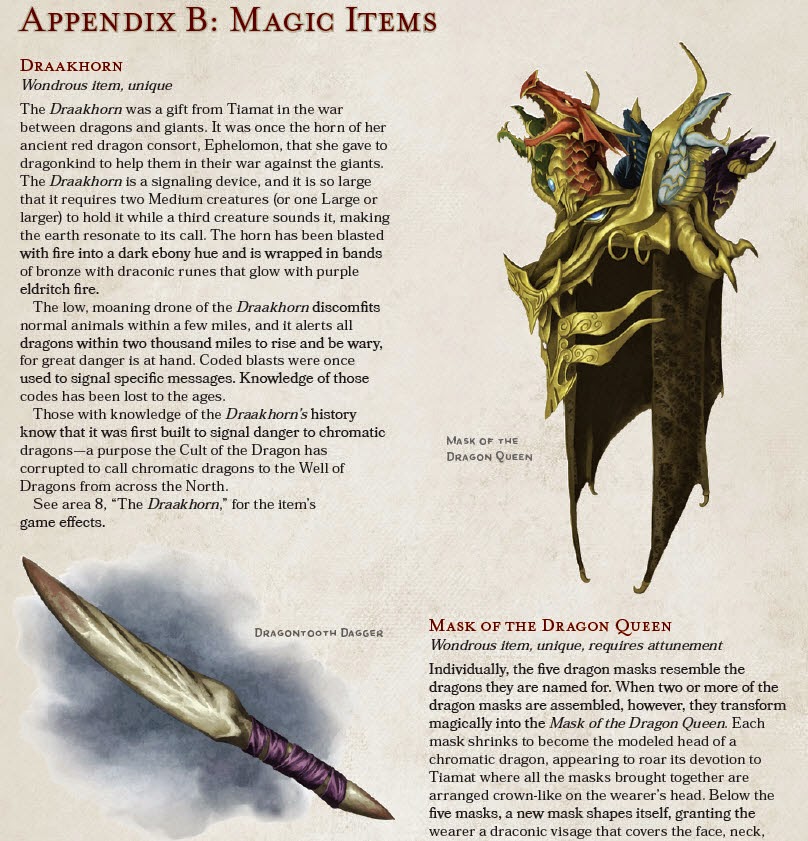 Similar to the Hoard of the Shadow Queen module, there is a downloadable supplement in The Rise of Tiamat, likely used to help keep product costs on the book down. It works well enough, but I would almost rather pay a few extra bucks and just get it all in one book with all of the relevant data in the same place than having to work with two different pieces of source material in parallel with one another. Of course, just a bit of prep time on my part did make the transition a bit easier.

As for the actual content, I still have a soft spot for second edition as that was what I started on. The books were of incredible quality (I still have several) and the amount of detail in the campaigns was also impressive and well-organized. Fast forward to the last edition, and things were not as smooth. Build quality was down, organization was abysmal and even the content itself often felt uninspired by comparison. This newest edition has remedied a good deal of that. This is the most fun I have had with modules or campaigns since second edition. 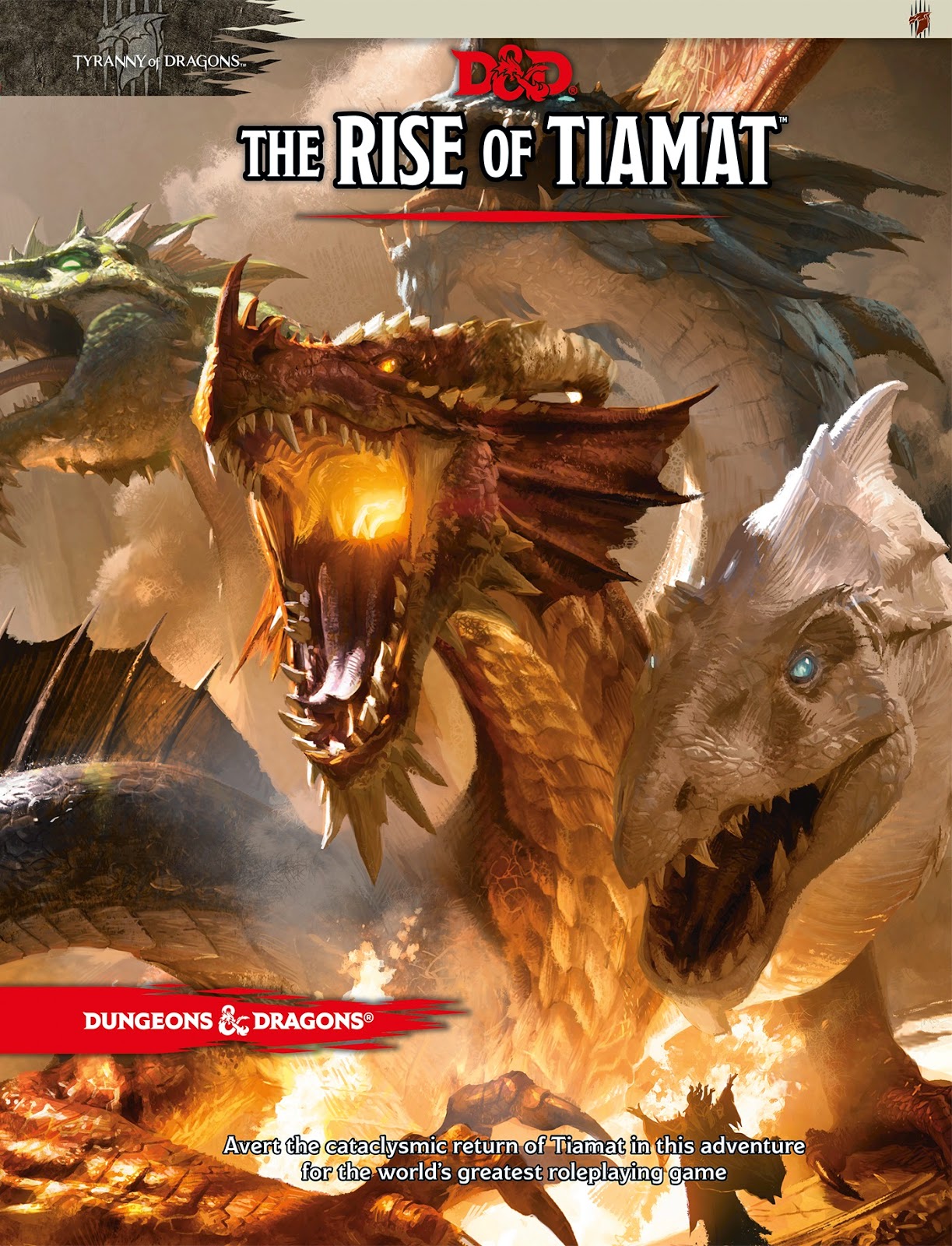 Small details like the supplemental online materials (which require you print off a lot of stuff or keep an electronic reader of some sort handy) makes it a bit less convenient, but the amount of information provided for DMs is truly impressive. This level of detail however, is not always consistent. Some portions of backstory and some dungeons are far more fleshed out than others. Those less thoroughly explained portions are not deal-killers, but it does occasionally make for an uneven tone – which is more pronounced in longer play sessions.

Maps for the various dungeons and structures look great and are appreciated, though they feel somewhat less concise than those I have seen in prior campaigns. There were only a handful of instances where lack of detail or information caused for some fumbling about in these areas, but tie in some of the slightly less robust dungeon maps with some of the instances mentioned above where written detail was lacking, and it makes these encounters or areas feel more like an afterthought. It is a shame since the really important moments in the game absolutely shine and makes these ‘afterthought dungeons’ somewhat forgettable by comparison.


As for the campaign itself? I will not go into any spoiler territory but suffice to say I enjoyed the tale more than most – including Hoard of the Shadow Queen. Speaking of soft spots, having Tiamat as the primary focus is just brilliant. This is a villain that resonates with a lot of gamers from over the years, helping to create a sense of familiarity while still offering up a fresh campaign. It is also worth noting that there is a good deal of potential replay value to be had here. I mentioned earlier the opportunities for deviation and those can provide for very different experience with different players – or even just players who want to give the campaign another go with new characters. Something like the starter set certainly had a handful of opportunities for the story to play out two or three different but similar ways, but there is a good deal more flexibility to be found here with The Rise of Tiamat.

The Rise of Tiamat is a great conclusion to the first campaign for this new era of Dungeons & Dragons. The content is engaging, the quality of the book is very good and it sets us up wonderfully for the upcoming Dungeon Master’s Guide.