I have played most of the Final Fantasy games over the years, dating back to the first on the NES (I traded my copy of Metroid to a friend who did not care for Final Fantasy at all. Considering by that time I had beaten Metroid at least a dozen times, I feel like I came out ahead on that deal). The series has always engrossed me, even when some of the installments might have fallen short of my expectations – but that is due in large part to my enormous expectations from the franchise. Enter Final Fantasy X, which is my favorite title in the series. This game was the reason I wanted a PlayStation 2 so badly years ago (and thanks to some family members pooling together for Christmas, I got it). Square Enix released a remastered edition of the game earlier this year, and now that this year’s Christmas is nearly at hand, I thought it was time to share my thoughts on the title. 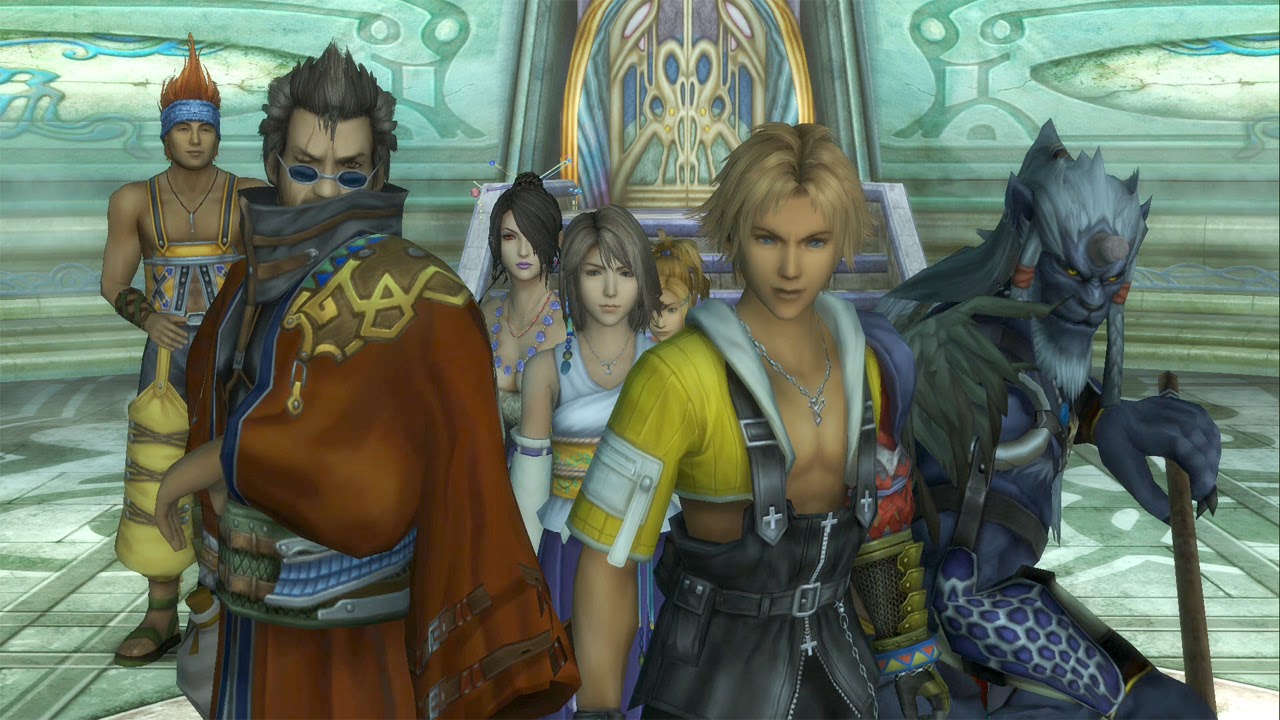 To begin with, this is a remastered version of the game. That means that trophies and updated visuals have been added, but the gameplay is basically unchanged from the original games. Hate the chocobo race and lightning dodge mini-games? Me too! They are still here, just as frustrating now as they were years ago. There are moments of stilted conversation, arcane mechanics and Tidus’ much derided laugh. This is still very much the same pair of games Square Enix released on the PlayStation 2.

Certainly when going back to a game from the past, you run the risk of revealing that it was perhaps worse than you remembered. I recalled the story very fondly, but did not specifically recall how the combat system worked. A few minutes in, everything rushed back to me. The need to shuffle characters in and out of the lineup can feel a bit tedious by today’s standards as battles can take longer to conclude that we have gotten used to. The reliance on checkpoints for saving the game also feels like an older mechanic compared to something like Dragon Age: Inquisition, which lets you save anywhere at just about any time. The inability to skip a cut scene in Final Fantasy X makes having to repeat some sections a borderline chore, despite how good the graphics look. 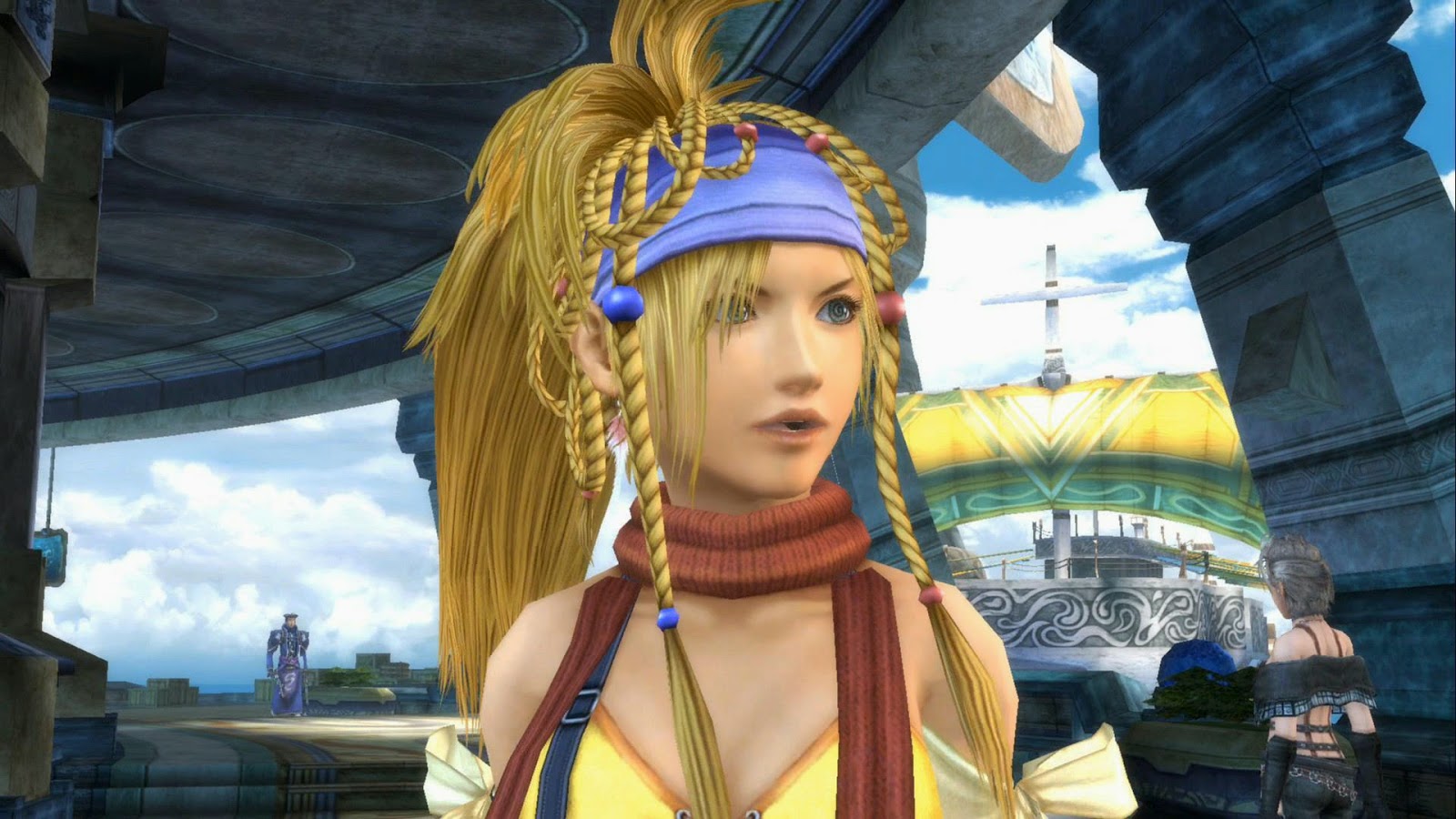 All of these things are true. Yet at the end of the day I still enjoyed my adventure immensely.

The music in this game is probably my favorite of all time. The title scene with Return to Zanarkand playing is still as emotionally touching now as it was years ago. While the updated visuals are certainly appreciated, the sound design in this game is as good as ever. Some of the characters show considerable growth throughout their journey and others unfortunately do not, but I still enjoyed my time with them.

This being the international version of the game, there were a few new twists that I did not experience the first time around. There is an option to use one of two different sphere grids for character development. Different spheres are also available. Perhaps most notably are the dark aeons, whom I had read about years ago and always wanted to roll against. After all, I had most of the ultimate weapons unlocked and was able to take down the final boss in two turns back on the PlayStation 2. I figured these dark aeons would be a piece of cake. Wow was I wrong. They are among the most beastly bosses you will ever encounter in an RPG and getting the chance to encounter (and get wiped out by them) was both a treat and a frustrating experience that made me want to improve my characters even further.

All in all, Final Fantasy X aged decently. It took some chances (the introduction is a great example of this) and most of them paid off in spades.

Then comes Final Fantasy X-2, which has a bit of a story to it for me. I was dead broke when this game came out, and absolutely could not afford to purchase it back then. I  had a buddy who was borrowing it from a brother. He had beaten it and then loaned it to me with the understanding that I could have it for about a week. Back then, all of your data was stored on memory cards. There were no login profiles or any other means of separating one user’s data from another. This part is important later.

I sunk a great deal of time into the game the first two days I had it, but then unexpectedly got called out of town for work reasons for a couple of days. I was a bit agitated over this, but figured my handful of days would be enough time to finish up when I got back. In the meantime, my son had started to play the game (he was young, but actually learned how to read and do basic math by playing RPGs and the like) when he was roughly five or six years old. He had become infatuated with the game while I was gone (that’s my boy). I then came home and wanted to finish the game since I was on a time limit. I kicked him off that night when he was playing it, and I think both of us realized there was not time enough for both of us to beat it before I had to return it to my friend. 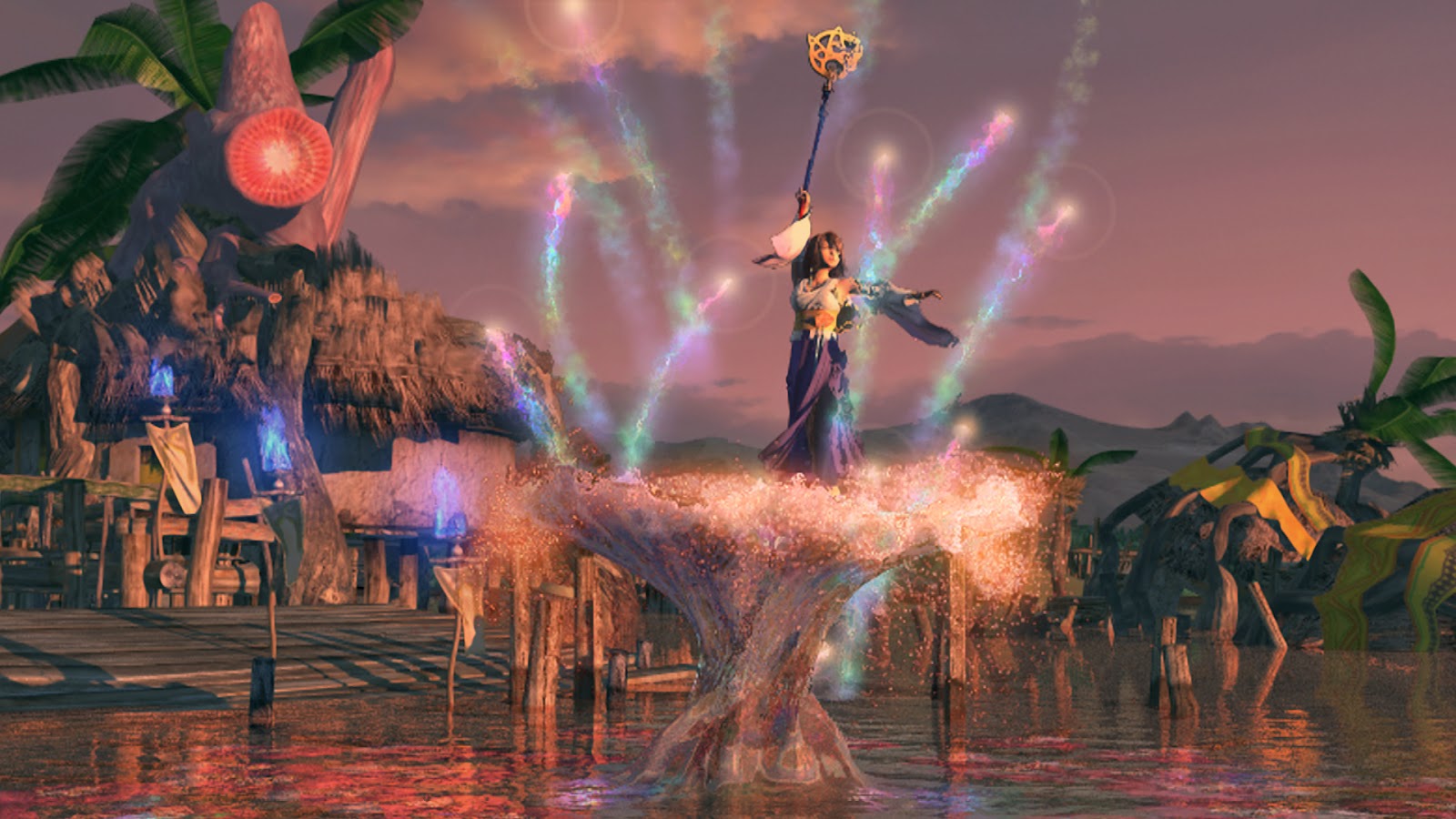 So the next morning I woke up and my son was already up and playing. I kicked him off because – well, I wanted to wrap up my game. Funny thing happened. ‘Somehow’ my save game data from the night before had become deleted. He later admitted that he figured it was the only chance he would have to finish the game (and… that’s where I almost disowned him). So, neither of us got to finish the game, I just gave it back to my buddy that afternoon and called it good.

Fast forward to earlier this year, and we both got through X fairly quickly, though X-2 took us both longer. Neither of us really seemed to connect with it the way we both remembered. I do recall liking X far better (one of my friends back then used to refer to X-2 as Final Fantasy Barbie because of the team of  girls and their penchant for repeatedly clothing changes). There were fewer annoying mini-games but the story never really tracked with me the way Final Fantasy X’s did. In fact I felt like the majority of the fourth chapter was too passive, with a focus on peering about using comm spheres and watching events instead of participating in them. 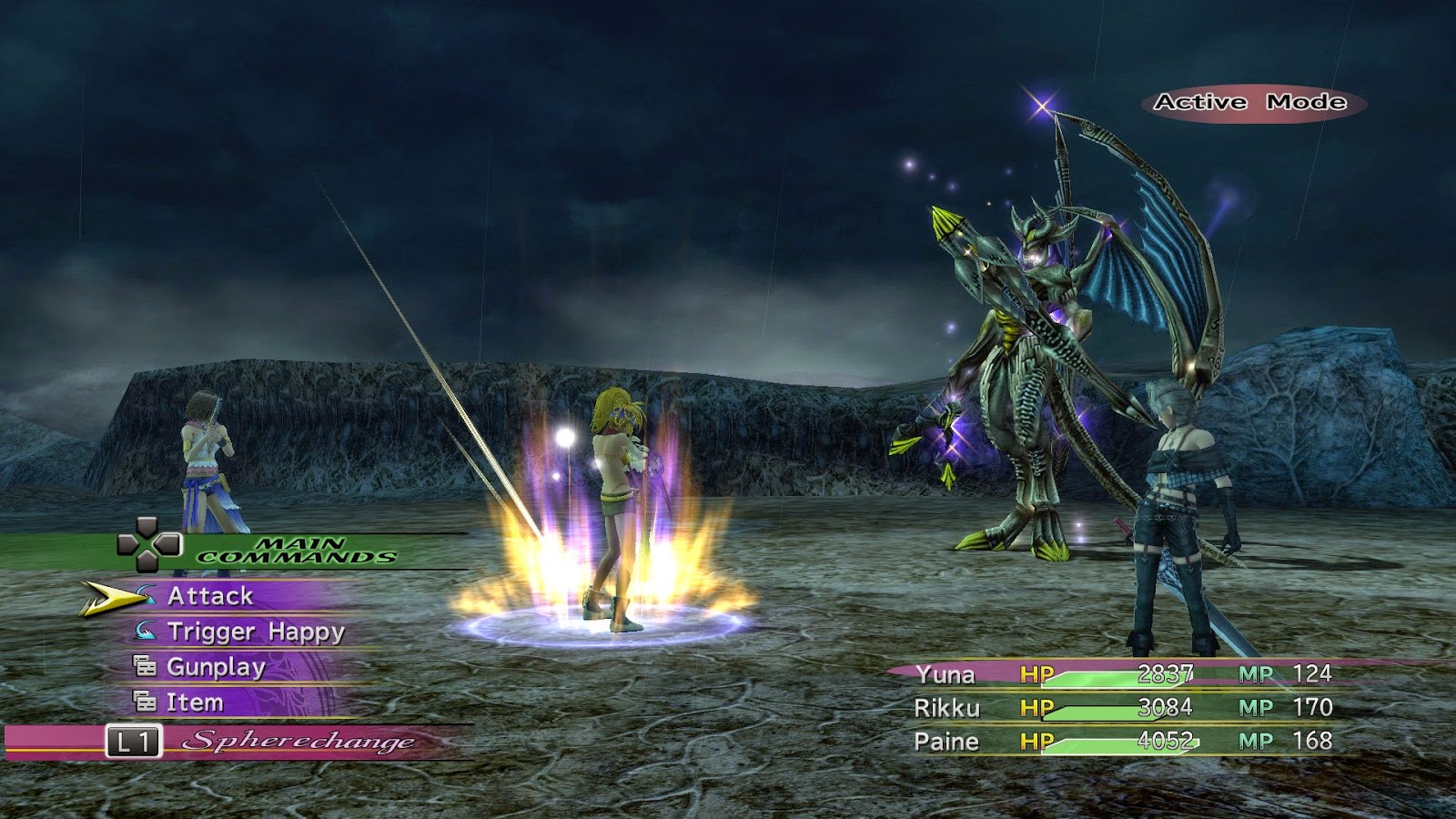 After beating the two games, there are still a couple of pieces of additional content worth taking note of. There is a fairly cool series of cut scenes that help to fill in the gaps between the two games. There is also a very pretty credits sequence with a short story told in voice over. This fell a bit flat to me, though it feels like it leaves the door open for a Final Fantasy X-3, which I would be in complete support of. There is also a mode call ‘Last Mission’ that is set a short time after the events concluding Final Fantasy X-2 that gives the girls a reason to come back together for one last adventure while catching up with one another.

This mode is interesting because it is such a complete departure from both Final Fantasy X and X-2. This is more of a top-down strategy game with turn-based movement as you take one of the girls and try to guide her through the floors of a tower. It is an interesting idea but for whatever reason, much like X-2, it never really ‘clicked’ for me the way Final Fantasy X did.


For me, this game was a must-play just because of Final Fantasy X. It was great to bring closure to X-2 as well, and all of the content certainly made this a great package of JRPG content and leaves me hopeful that maybe Spira will get revisited one more time in the future. The package has plenty of content on its one disc, though some of the parts are more enjoyable than others. Fans of Final Fantasy X or X-2 will likely find plenty to like here, though if you disliked those titles before, there is probably very little reason to give them another go now. Some of the mechanics have not aged particularly well and the gameplay itself is untouched as the visuals were the focus of the facelift.