You would be hard-pressed to find a gamer that is not at least familiar with the Halo franchise. A juggernaut in console FPS gaming, the Halo franchise started back in November of 2001 and changed the genre forever. Folks will argue that Goldeneye, for the Nintendo 64, was what really pioneered the genre on the home console and I would agree. But I would argue that while Goldeneye’s multiplayer component was excellent, its single-player campaign felt lacking, empty even. When Bungie released Halo: Combat Evolved for the original Xbox in 2001 there was a massive shift in console gaming. Bungie effectively proved that console FPS games could be beautiful, engaging, and carry a story. 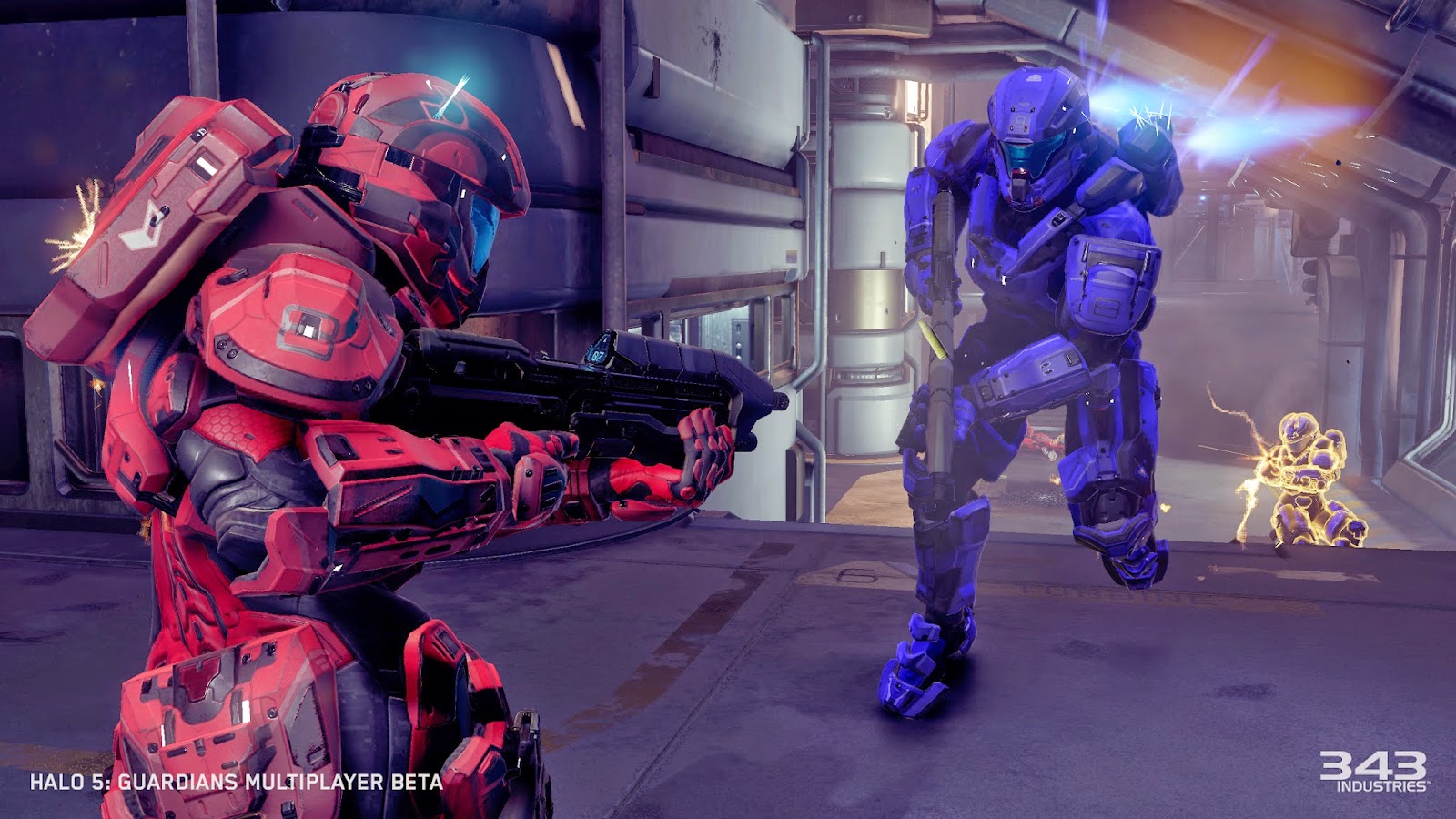 I have been playing first person shooters since the days of Wolfenstein, Duke Nukem 3D, Doom and Quake and have managed to get my hands on a majority of the major (and not so major) titles in the last 20+ years and out of all of those different titles I cannot think of a single one that grabbed me and held on to me the way that the original Halo did. With the incredible story and massive world that was the original Halo ring, Bungie continued to build upon its strengths in subsequent releases while still leading the pack when it comes to FPS gaming on a console. When Halo 2 was released and it supported true multiplayer gaming (i.e. not local co-op/multiplayer), the FPS console genre took another turn and competitive FPS gaming, which had been around on the PC for years by that point, took its first steps into the living room. Since then, the Halo universe has been one of the most popular competitive multiplayer games along with FPS-genre kings like Call of Duty and Battlefield and each release since Halo: Combat Evolve’s has continued to perfect the online components to the games.

Enter November 2010 and the release of Halo: Reach which was Bungie’s final Halo title before moving on to other (though, not better) things like the wildly popular, yet fairly substandard Destiny. The single-player campaign was a love-story to the fans of the genre that had been around for nearly ten years. With Bungie’s final goodbye, Microsoft Studios established a new company, 343 Industries, that would take over the Halo franchise. Given Bungie’s success with the Halo games for the last 10 years, there was a ton of pressure on 343 Industries to live up to the name. With the release of the miniseries, Forward Unto Dawn, which lead into 343’s first entry into the franchise, Halo 4, 343 Industries built upon, in some good ways and bad ways, the Halo franchise but more importantly they made it their own. The story was a continuation of the events of Halo 3 but where Halo 4 really shined was in its multiplayer. In previous years the Halo physics felt a bit ‘floaty’ and less grounded when compared to Halo’s competitors, but addicting and unique gameplay modes, a tradition that has been around since Halo 2, were in full effect and the Halo 4 multiplayer continued to provide fans with the same level of excellence that Halo 4’s predecessors had given us. 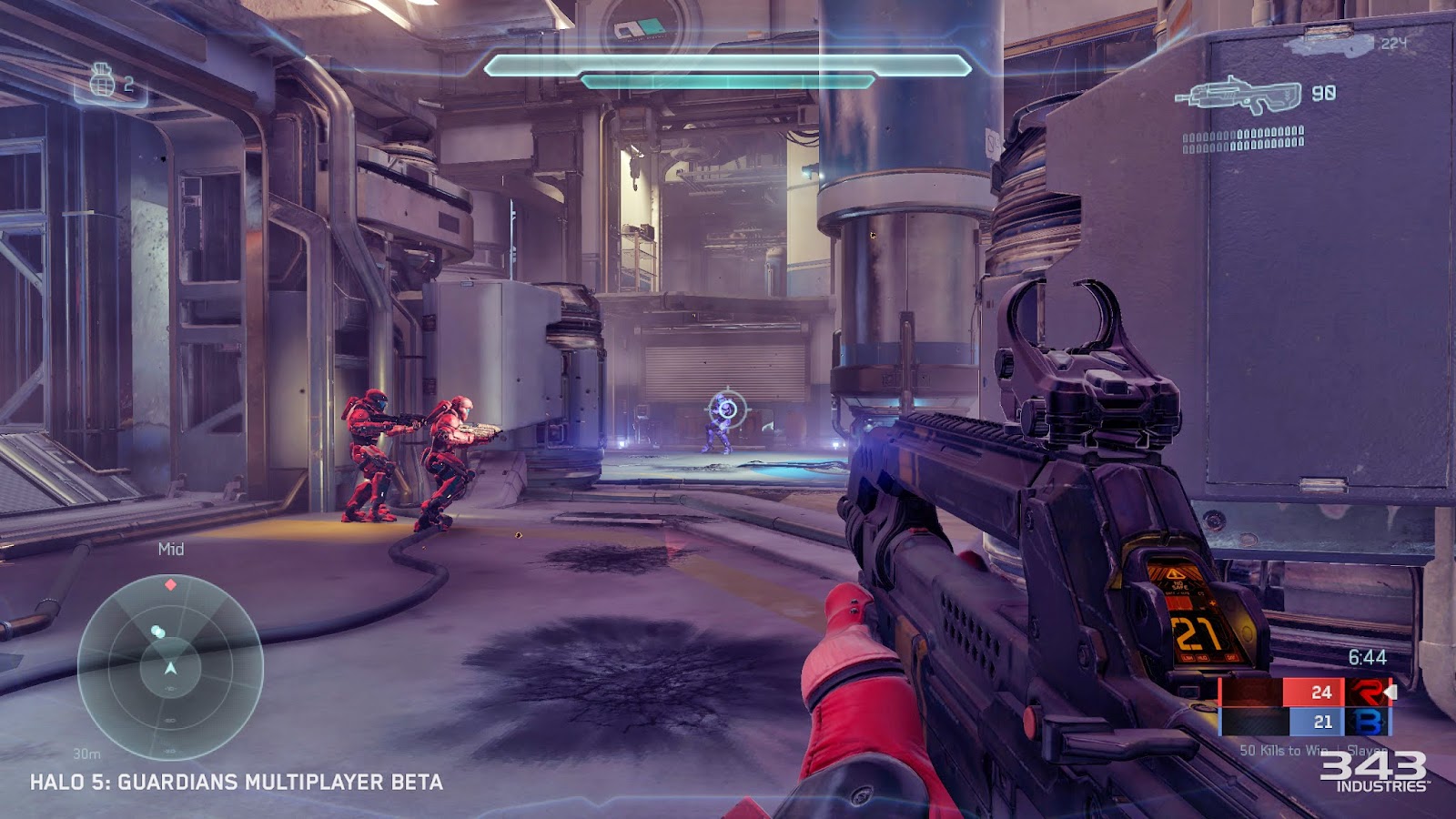 Nearly two years after the release of Halo 4, 343 Industries has released an early access / preview build the Halo 5: Guardians Multiplayer Beta and for the week prior to Christmas of 2014 I was able to get in and play around on a few of the maps that we will see in Halo 5: Guardians. To give a little more back story, I personally found the floaty physics of the Halo franchise a bit silly and a break from the original source material (Halo: Fall of Reach by Eric Nylund), after all, Master Chief is running around in a suit of armor that weighs as much as a sub-compact sedan; under no circumstance would he “float” as he leapt around smiting The Covenant.

My own personal tastes had me playing titles like Call of Duty, Counterstrike, or Battlefield which gave me a little more realism when it came to the physics; I am not saying that Halo’s gameplay is bad, not at all, I am simply stating that were it not for a wonderful story and one of the best sci-fi universes that we have seen since Orson Scott Card’s Ender series books. I just did not like the controls and the way that the multiplayer combat felt. Over time it has improved and I can say that Halo 5: Guardians has me excited. Very, very, very excited for the franchise again. Fast and snappy movement along with improved physics goes a long way and 343 Industries has made such a massive improvements to the game engine that I am well and truly eager to see what else they will bring us. Whipping through one of the two levels, Strike and Empire, is fast, responsive, and can only described as “arcade-y” and I love it. While I may suck at the game compared to others in the press world (I believe my best game was something like 7 kills, 11 deaths), for the first time in years, I truly want to play more of Halo’s non co-op multiplayer.

The graphics on the Xbox One are stunning and feel both unique to Halo 5 as well as though they would fit in with any of the previous Halo titles (minus ODST, which is a sorely underrated game). The one thing, though, that I really do not like is what 343 Industries has done to the Mjolnir powered assault armor (aka SPARTAN armor). What has historically been very bulky, almost tank-like has been shed away to resemble fancy ODST armor (while I really like the ODST armor, Chief and the other SPARTANs were always more unique, more imposing) with some unique capabilities. What I think is that with Halo 4, 343 wanted to make the SPARTANs their own and in doing so took away a lot of what was neat about the Chief’s armor and in Halo 5 it seems slimmed down even more. 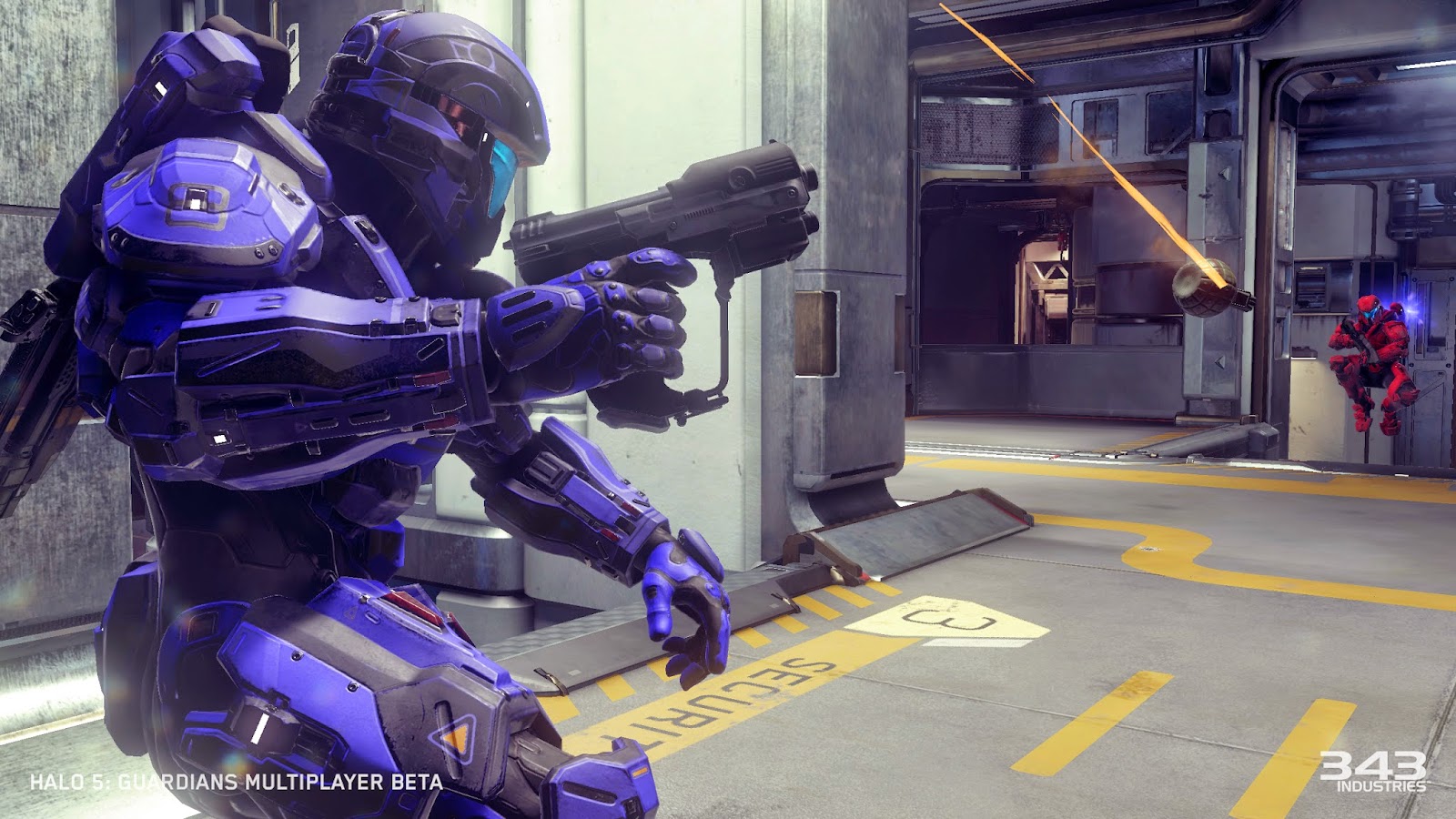 While the gameplay has become very snappy and fast, the models seem like they been stripped down a little more to allow the more agile gameplay. Where my argument lies is that within the Halo universe, Chief and the other SPARTANs have always been nimble, athletic, and extremely fast, after all, the SPARTAN-IIs without the Mjolnir armor can run up to 55 km/H (or about 34 miles per hour) and in the Mjolnir armor the SPARTAN-IIs could reach peaks of 105 km/H (or about 65 miles per hour). *For more information on SPARTAN speed, check out http://halo.wikia.com/wiki/SPARTAN-II_augmentation_procedures. What has me excited is that the SPARTANs in the Halo 5: Guardians multiplayer preview actually feel like they could be running that fast, but doing so after stripping away so much of their armor is just heartbreaking. One of the things that I truly loved about Chief and his SPARTANs was the overall size of these heroes. They were larger than life. Now they just look like Marines in fancy armor. It is quite disappointing really.

While I do not find this an issue, Halo diehards have brought up a non-issue when it comes to the new aim-down-sights feature of Halo 5: Guardians and I would like to take a moment to comment on what is happening here. While I played a number of matches, most of my deaths came from the ridiculously overpowered hammerfist skill (where your SPARTAN essentially ground-pounds you into dust for an insta-kill) or from someone aiming down the sights of the pistol. Note that the pistol, since Halo: Combat Evolved, has always had a zoom option and it still does, so not much has changed on that front. I think that I was killed two, maybe three times with the SMG as it was aimed down sights, which itself is a bit too powerful and will hopefully be nerfed a little (a few pulls of the trigger or a concentrated burst to the chest of a SPARTAN will kill them every single time). 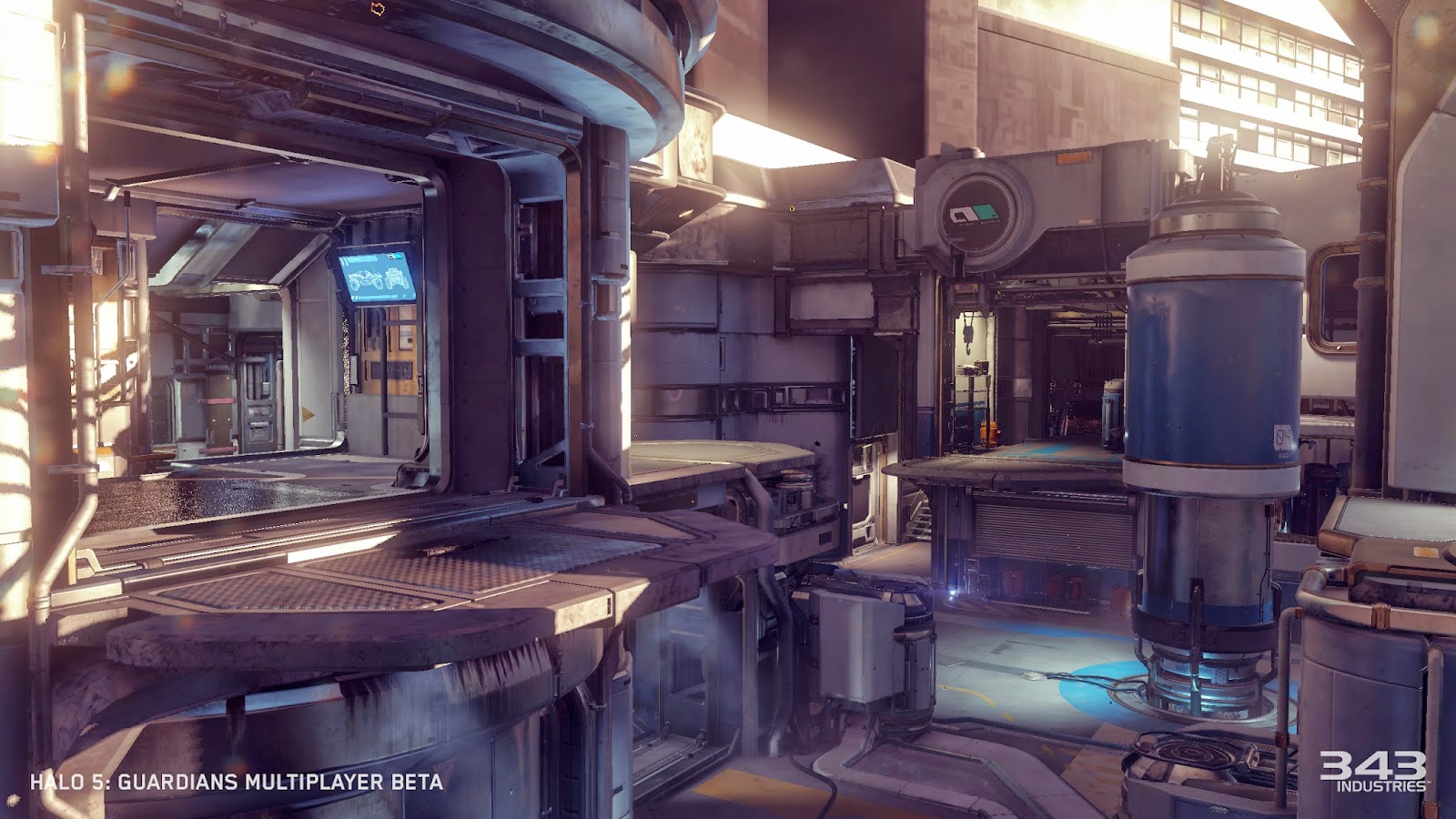 Sure, there is a bit of an increase in accuracy, but it comes with a price; once you are hit you are no longer scoped. What gets me is that these Halo fanboys all seem to think that it breaks the game or, in many cases, they claim that it goes against the Halo universe and how the SPARTANs have always fired their weapons. If I recall correctly, in John-117’s first real test in the Mjolnir armor, there is a bit of dialog between him, Cortanna, and Dr. Halsey about how weapons are sited, zoomed, and compensated for by Cortanna (or her backup processes while she is absent from the suit). There are numerous references throughout the books about John shouldering his weapon to fire down range. My honest opinion is “finally, they’ve added more to the SPARTANs to help align them with the established lore.” Any time a game can come closer to its original source of lore I count that as a win. And Halo 5: Guardians is shaping up to be a massive win.

This may be selfish, but outside of the horridly stripped down Mjolnir armor, the worst aspect of the Halo 5: Guardians multiplayer preview was that I was only able to play for a few short days. The fact that I am eagerly awaiting the 29th of December, when the Beta / Early Access returns for a few weeks, certainly confirms something that I never thought possible. I am well and truly excited for the next Halo. While I am apprehensive about the insta-kill hammerfist skill, the overly powerful SMG, and the absolutely atrocious SPARTAN models, the improved speed and gameplay of Halo 5: Guardians is worth it. I felt powerful, fast, and more like how I envisioned the UNSC’s super-soldiers are after reading the books and playing the games for the last decade plus. The last time I was this excited for a Halo title was Halo: Reach, and even then, I feel that the improvements are setting Halo 5: Guardians to be the best feeling game in the series. 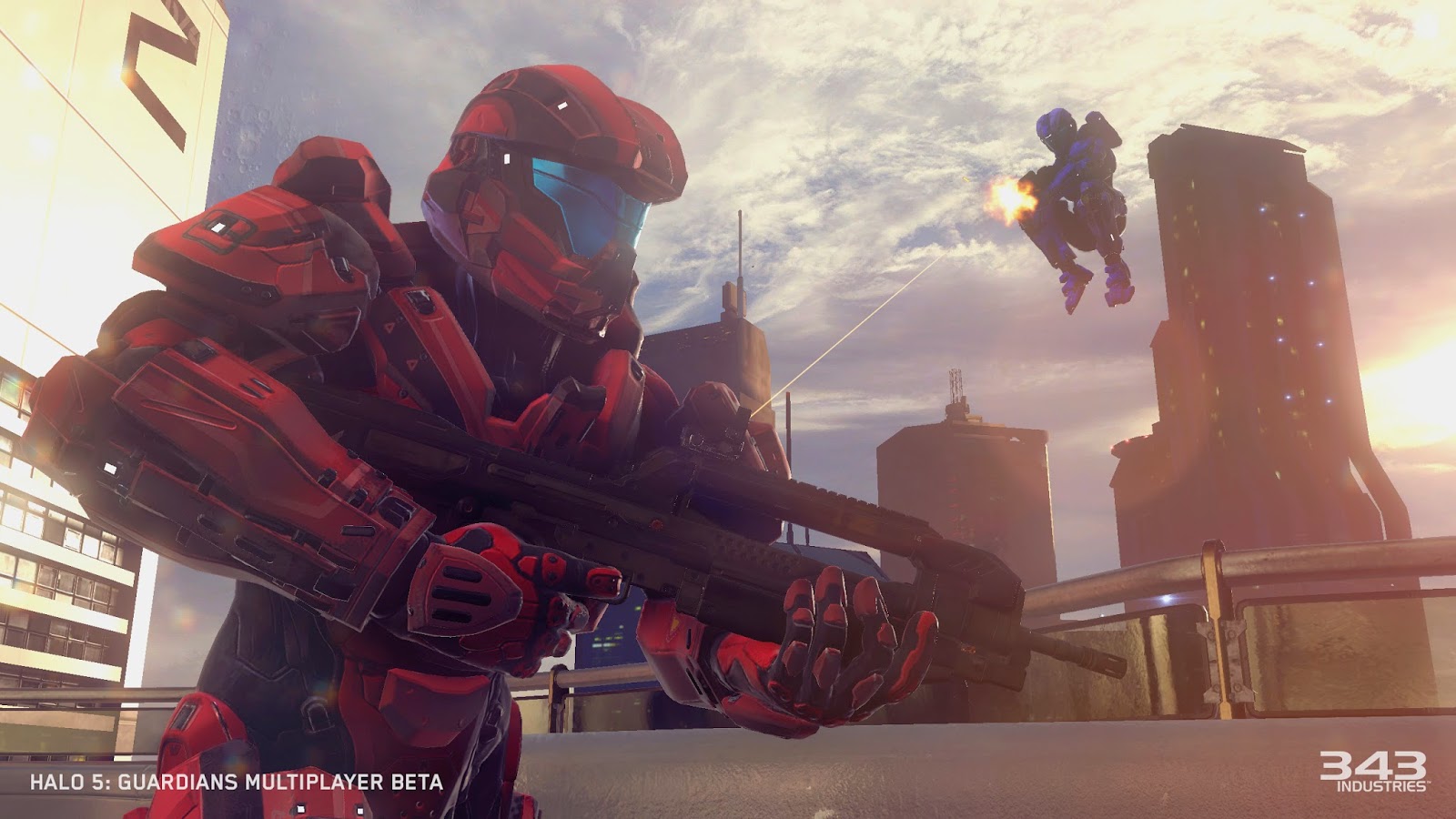