Most of the time when multiple game genres are mixed into a melding pot or alchemic cauldron to synthesize something new I’m rather wary. When Atlus announced that it would be performing a fusion of the cast of Personas 3 and 4 into an Etrian Odyssey dungeon crawling game style I was curious to say the least. My biggest worry was that I was afraid that the stellar casts would be lost to the more mechanics based game type. Having yet to play Millennium Girl (as it continues to stare me down from across the room on the shelf dedicated to my DS library) I wasn’t quite sure what to expect when adding a Persona like story to the Dungeon Crawl. Knowing Atlus I should have known better, as there was nothing to worry about. 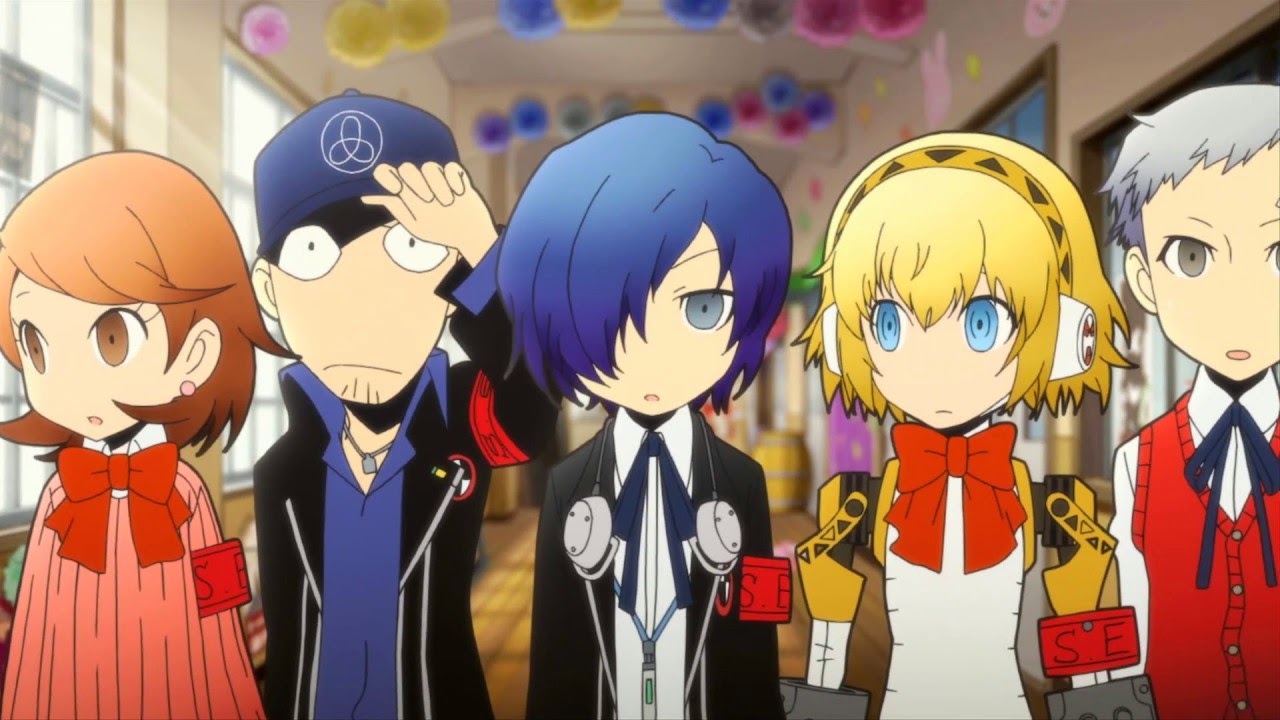 From the start players will have a choice to make in regards to which main Persona character and cast they wish to take the center stage. Wanting to know how different that it would be, I started off both stories naming the two protagonists the same name across the files and have been more than entertained with completely different stories and experiences. Persona Q tells two stories that keep close to the styles of both Persona 3 and 4 while being in a new setting that is shared between the two.

The only issue that I have if that I personally preferred the original voice actress for Chrie back on the PS2. She had fit the character so well. While I do like the actress for Lady Black Heart of Game Industry, I never felt that she was appropriate for Chie. I think it is because I find her a tad too whiny for a character with that level of self strength. That out of the way, like Bravely Default, Persona Q hosts a good level of voice acting on the 3DS which is still surprising to see coming out of this little system. Just about all of the original voice actors from Persona 3 and 4 make a return in a more chibi-esque styled adventure as they go dungeon crawling in this new adventure. Having most of the major events voiced was perfect for allowing the auto-scroll as one can sit back and enjoy the banter whether it be coming from Kanji or Junpei.

“Fate leads the willing, and drags along the reluctant.”
–  Lucius Annaeus Seneca, used during the opening scene of Persona Q 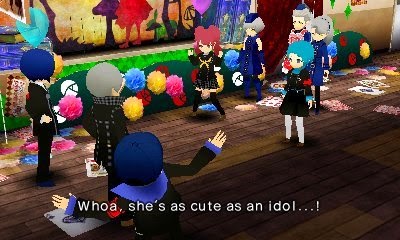 Before heading down to go dungeon crawling, players must set up their party in which members consists of either the P3 or P4 casts with two new additions that follow the chosen group. These two new characters are quite interesting. While one makes me think of the Heavy Knight in the Disgaea Series, the other just makes me hungry as she is constantly eating corn dogs, takayaki, donuts, etc. regardless of the situation. In regards to combat and character statistics, they work as one as they are always together. From their new addition creating new experiences, the rest of the casts return with their banters, friendships, and rivalries. While Persona Q seems to happen at a set point over the course of their original adventures, in a way it feels more like a sequel, and a sequel done right. Rarely can an entire cast of characters be put into a new setting and storyline and come out more than alright. Available at many points are dialog choices that can either make a seen that much funnier or be used to act like the more mature of the group. I rarely voted to use the second of those options. Where would be the fun?

While players may be used to the main character being of the Fool Arcana making them a wild card, this new region sticks them to their opening Personas like the rest of the party. This does not come without a bonus for everyone else however. Now instead of persona switching just for the main character, the velvet room introduces to the entire party the ability to have Sub-Personas to supplement their main ones. For the first time, the rest of the party plays on level with the protagonist which was a quite welcome change as they were not the be all end all as they could sometimes be depending upon the situation.

Following on the heels of Sub-Personas are fusions that also make their standard return. Mixing and matching Personas to make new ones, bring in new abilities during fusion, and use the compendium to save and / or re-acquire Personas at a later time if needed is all there. Using these to supplement the characters main one was quite a change and a welcome one at that. It is always nice to see new features in a long running series with various spin-offs. 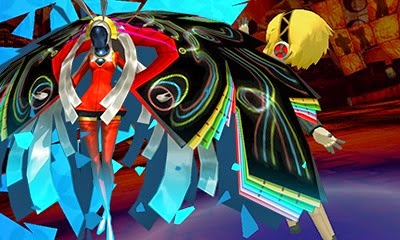 Dungeon exploration is where Persona Q takes the tried and tested system from the Etrian Odyssey series and puts it to use with several enhancements. Exploration is done in a first person format where players are going to have to pay attention to their surroundings if they do not wish to miss anything. What could make finding walls slightly easier than what I have been used to is that party members will call out if there is something funky with a particular wall. The biggest enhancement to exploring is the auto moving system is now a traceable line instead of having to put down arrows for every grid square. This line can be simply drawn or erased where needed instead of having to worry about removing it piece by piece.

Mapping has always been half the fun of exploring. Now? Now there’s an actual reason to go through an entire floor to mark it out to 100% other than to find shortcuts. On each floor lies a chest that remains locked until the entire floor has been mapped out. Before thinking oh I can just draw it! Each available square minus those for other chests require been walked on if there are to count. For the second time that I have personally seen, the first being Shin Megami Tensei 4, Play Coins can be used in game to unlock these chests if exploration is not your thing allowing the contents to be yours for an ever decreasing costs vs how much of the map has been explored. The only catch with using play coins however is if your battery dies or if the party wipes and it’s game over, then those coins are not refunded.

To make mapping easier, the system has had an overhaul (keep in mind I have no played Millenium Girl yet… I really should… it’s next I swear). While the auto mapping has always been around, now walls lines are added making it much easier to figure out where one is going and where one has been. Along side the auto mapping system is a much more organized system of icon sorting for marking directions of passageways, doors, stairs. The introduction of these icon submenus makes it that much easier to pick and choose which one is needed at that particular point in time.

Battle is generally the centerpiece of most RPGs regardless of the sub-genre. Persona follows its own battle system relying heavily on a weakness and strength formula, while the Etrian Odyssey follows the older Wizardry school way of things. What happens when they are put into the melding pot? Mixing these two systems yielded something quite interesting that can take a few battles to get used to.

Utilizing the Etrian styled interface and combat base, character icons are at the bottom of the screen while the enemies are the 3D rendered version that we are used to seeing. Players set up all the actions that they wish to perform for the turn in which from this point the persona style of combat comes into play. Players choose to either use the standard hit, defend, and items options to the more persona specific SP or HP attacks. Targeting an enemy’s weakness will either stun or drop them to the ground as per the normal Persona rules of combat. As the core of the interface follows the Etrian style however, when a weakness is exposed a character does not receive an extra turn but instead enters a boost mode. This boost mode allows that character to use any SP or HP moves for free. This can be extremely convenient when wanting to use a large resource skill.

Sub-Personas other than supplementing characters with even more skills and element defenses also have one more feature that applies to combat only. Each Sub-Persona adds an extra amount of HP and SP to the character that they are being attached to. While others have implemented various versions of this in the past and the supplements themselves are nothing new, it’s how the supplementing works that makes it quite the feature. Every characters additional HP and SP applies for only for the time in battle. This means that once a battle is complete these amounts automatically refill themselves giving a bit of an edge which can sometimes be very welcome depending on the floor level vs current equipment strength. Strategically I found myself putting Sub-Personas with high HP on either the front-line or on lower HP members just so that if they did get hit with a weakness it wouldn’t be a one-hit KO.

“A table should act like a table, dammit.”
-Shinji, Persona Q 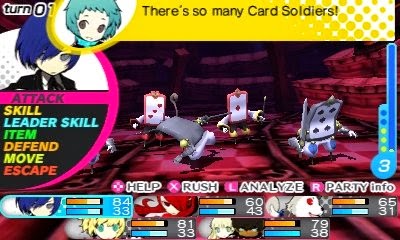 Atlus have always done a great job with music in their games from opening themes, to exploration, background, and battle themes. Persona Q is no exception. The funky hip-hop that we’ve been enjoying from Persona 3 to now is back I found myself bouncing / head bobbing around in my seat to the beat more than once… one the bus… yay for portable devices! I must have looked weird once or twice but that’s honestly beside the point. Battle music surprised me the most as the theme for the P3 and P4 casts are different from one another. Same vocalists but styles that were appropriate for the games that they came from as P3 had a much darker theme than P4 which is mildly funny considering P4 is a murder mystery.

If you’ve actually made it this far instead of running out and getting a hold of Persona Q, while I do thank you and appreciate it, what are you waiting for!?!