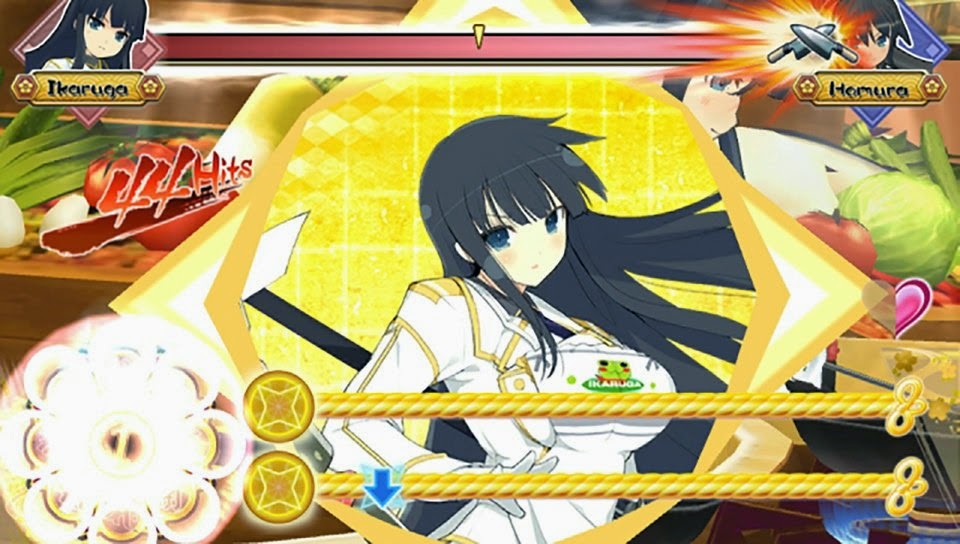 Senran Kagura: Bon Appetit! is a spin-off from the primary source materials, using characters and humorous mocking of its own style of game, is a sort of rhythm-based cooking game where you time your button presses to build the perfect dish as you work to compete in a cooking tournament where the grand prize is a ninja scroll of immense power. Before I dig into the review though, I do want to make a public service announcement: This game is full of fan-service. Clothes will come off (no nudity) and a number of adult-themed sayings, opinions, and graphics will be seen in the game. This is NOT the game to pick up for anyone under the age of 18 so keep that in mind as the holidays are right around the corner.

I will fully and wholeheartedly admit that there are a number of things I am either just terrible at or utterly detest and two of those things are rhythm games (Guitar Hero, Rock Band, etc.) and Quick Time Events (QTE’s), though those to things often go hand-in hand. There are a few exceptions though, as years and years ago I could slam around in DDR (Dance Dance Revolution) with the best of them at the local arcade, and Ryse: Son of Rome (recently reviewed by me at: https://chalgyr.com/2014/11/ryse-son-of-rome-pc-review.html), a game that is almost all QTE’s, was a surprisingly enjoyable and fulfilling experience. Others, like the Resident Evil games or Tomb Raider, I just could not get into.

With Senran Kagura: Bon Apetit! though, the fact that everything is done in good humor, often making fun of itself and other tropes in the industry, is an enjoyable experience. Looking back I see now that it is because the game does not take itself seriously and works hard (even succeeds) at making you laugh with its light-hearted antics. As with all rhythm-based games, music is key and the music in Bon Appetit! is excellent, upbeat, and simply fun to listen to. Atypical to a lot of games that come out of the East without getting an English dub, the Japanese seiyu are top-notch and I cannot begin to explain how professional and wonderful the voice-over is. They certainly know their business and make most Western games look like child’s play when comparing the quality of the actors. 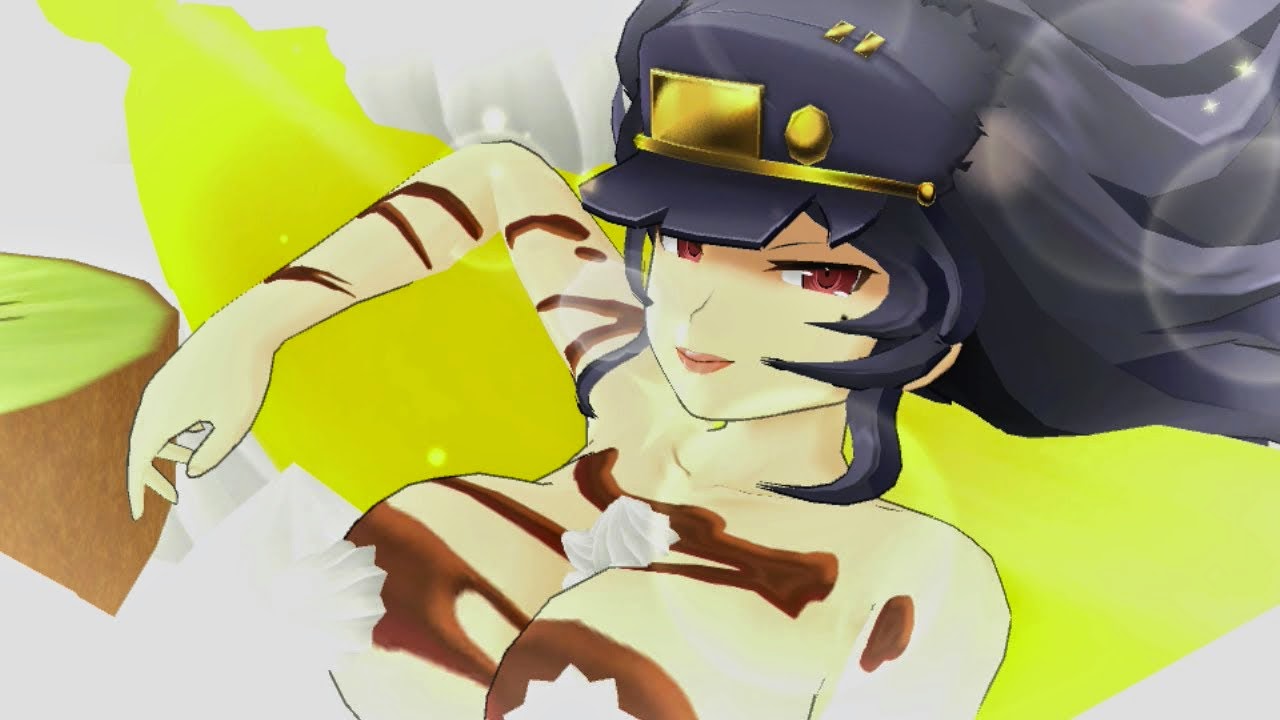 Like so much that comes out of Japan, graphics and audio are both over-the-top and generally hilarious, assuming you understand their humor and have a healthy appreciation of their gaming/anime/manga/GunPla culture. The characters are incredibly well drawn with no anti-aliasing (jagged edges) and gorgeously colored, everything in game is bright, colorful, and just screams “happy!” I personally understand the whole “fan-service” concept, given that I am a massive anime fan, and while it is all over the place in Bon Appetit! I never felt offended by what I saw. Others that are more sensitive to the concept of fan-service may have issue with it, but it is either understated (some of the characters will have only flashes of undergarments) or on a level that is so incredibly over-the-top that you cannot help but laugh (some of the … assets that the women have are hilariously disproportionate).

One thing that got to me, though, was the comic-book style exclamations that would pop up the song/board would ramp up in intensity; think of the old Adam West Batman show where you would have exclamations of “POW!” or “BOOM!” or “Good grammar is essential, Robin.” While they are fitting and work well in the game I found some of the exclamations of “Perfect!” or some animation effect that is happening in the background (such as your character, who is a ninja, mixing up batter with a whisk) could get distracting at times. Outside of that, though, the background animations are not only excellent, but oft-times quite funny. The concept of a female ninja, a symbol of both femininity, drive, and power, covered in glops of food and kitchen utensils is actually quite funny and in the bright colors and loud animations, often times would cause me to look away from the screen of the Vita while laughing and thus scoring poorly. 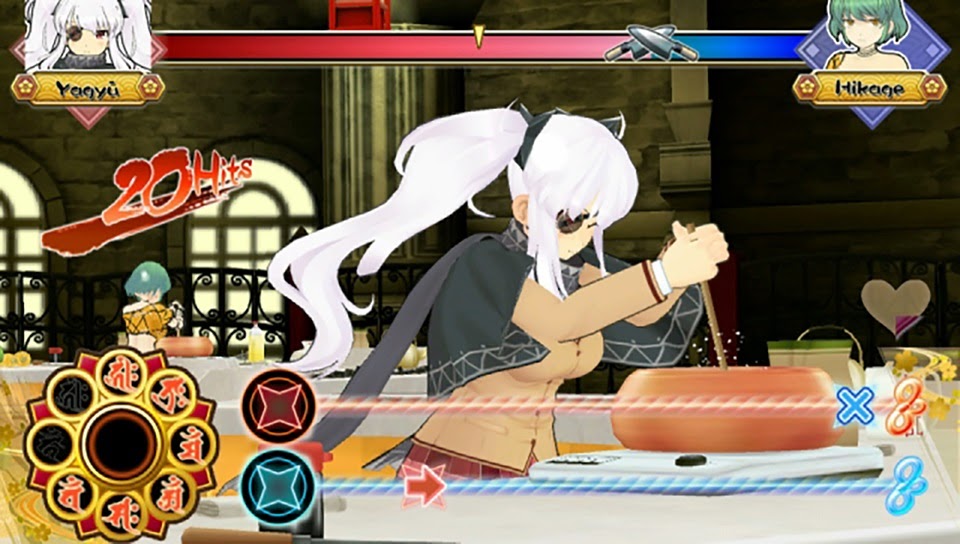 Gameplay itself is fairly run-of-the-mill as there is not much you can do with rhythm-style games, though the big win for Senran Kagura: Bon Appetit is the comedy involved. As I mentioned previously, this game does not take itself seriously and that pays off. I normally stay away from rhythm games as I just do not enjoy them; Bon Appetit! is a different story. Its light-hearted and comedic nature, ample assets, and engaging gameplay keep drawing me back into it as a simple time-waster. “Fights” are quick, taking only a few minutes at a time, and can at times, be brutally hard, but never so hard that you throw the Vita in frustration, though I do admit that I laughed a time or two hard enough that the Vita almost took a dive on my hardwood floors.