comments Share
You are reading
Abyss – Tabletop and Board Games Review

Abyss is a card game that is built around the concept of gathering points (called influence) that can be tabulated in the end. However, the multiple ways it does so makes Abyss feel different than similarly themed card games such as Dominion. The build quality and art here is excellent and the game itself really feels more immersive than similarly styled board games, allowing it to stand apart from the pack. 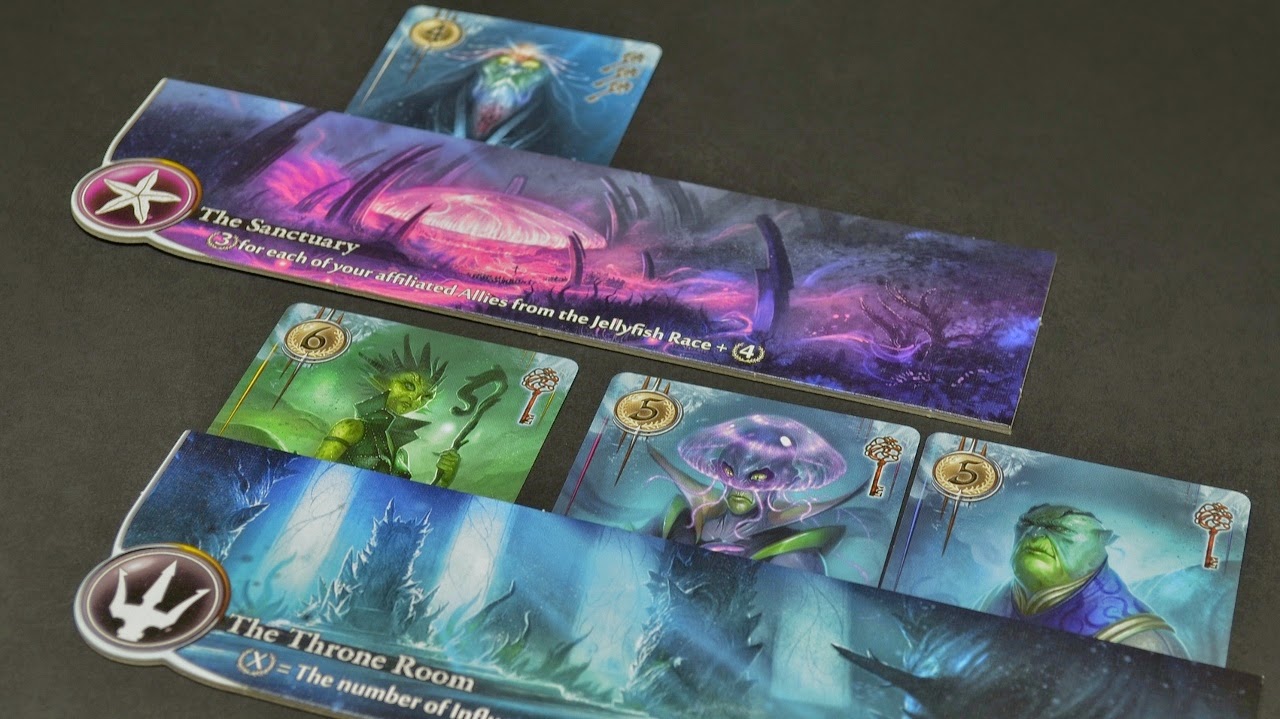 There are a lot of pieces to Abyss and it would be very easy to let it confuse you if not for reading through the directions. These are thankfully quite thorough, only leaving us to wonder about a couple of questions here and there on our way to learning the game. However, those matters are easily cleared up and while the first game played was of course longer than the estimated time of forty-five minutes, the second game actually concluded in forty.

Despite its many pieces, Abyss is surprisingly straightforward as turns come in three stages. The board itself (which is thick and sturdy but also beautifully illustrated) is comprised of three primary sections. Along the top is a row used for exploration, though the middle is a row of discard piles and the bottom is reserved for the lords. These are interacted with on your turn as you can spend your round buying a lord out of the bottom row, picking up a discarded stack from the middle row or using the top row to ‘explore’. The endgame revolves around the accumulated value of your lords, your lands, a handful of ‘smaller’ types of cards used as in-game currency and some tokens. What is probably most interesting about Abyss is the way it handles instant gratification versus your endgame. While exploring you sometimes have the choice of picking up a pearl or grabbing a token. The pearls do nothing for you at the end of your game when you add up your score, but they can be used to purchase things during the actual game itself. The tokens do nothing for you during the game, but they do help to boost your final tally.

Even the lords handle in similar fashion. Many of the lords have special powers. Some of the powers work as a one-shot that triggers right when you buy them. Others have perpetual abilities that can be triggered once every turn. Other lords can count as ‘keys’. Keys can be acquired by a lord who represents one or through the exploration phase. Three keys unlocks a land, and lands hep you with your final score (more on those in a minute). Some lords do absolutely nothing – but they carry high values for your endgame tally. 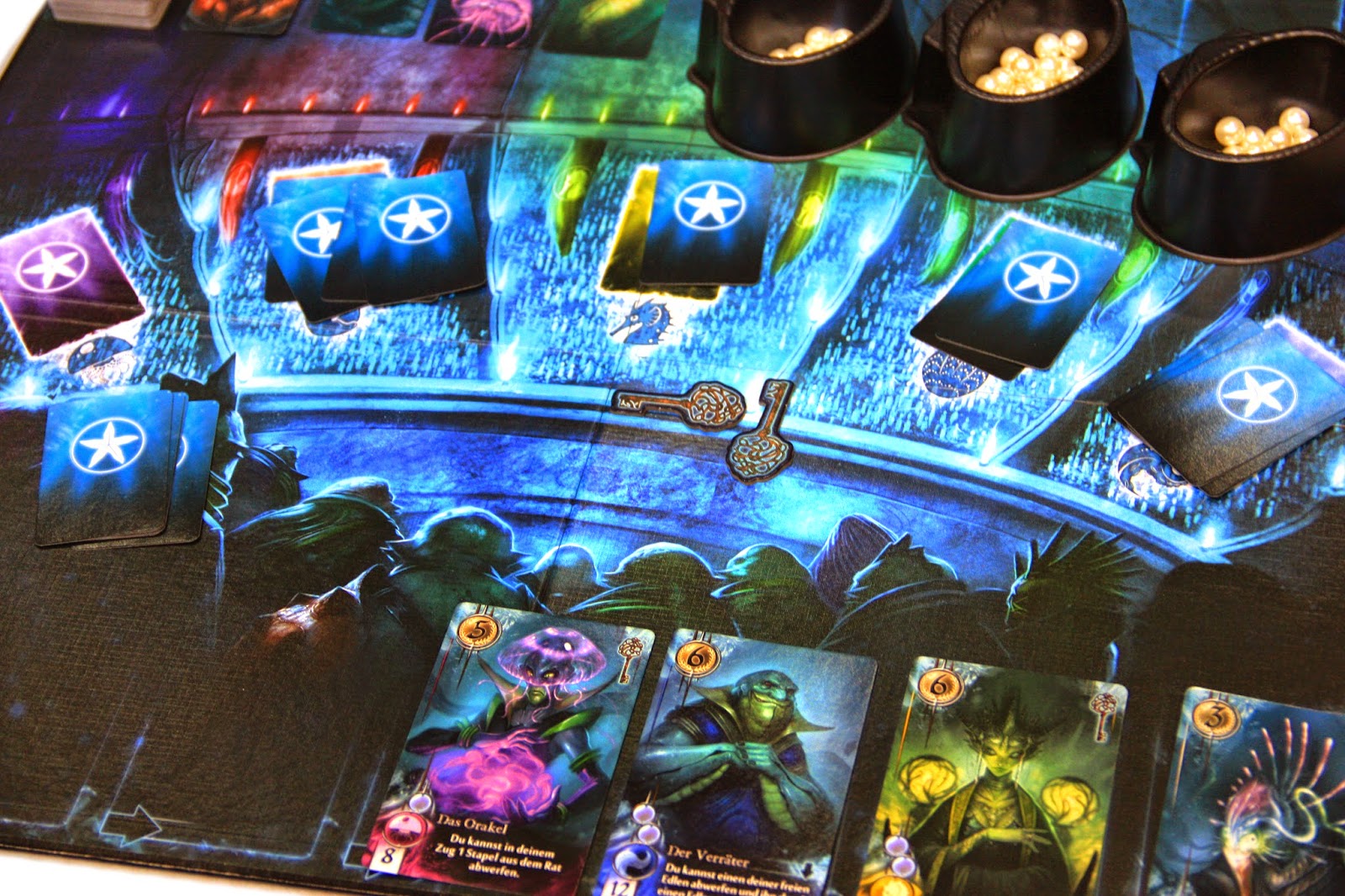 The lands themselves are longer game pieces that like the boards and the lord cards look very appealing. Each has its own score or abilities. One piece lets you swap it out for any other land piece still in the deck. Others give you a bonus on your endgame tally for each jellyfish guild piece you have. Another land might give you double the points for your lowest scoring lord. These pieces of land are generally the largest denominations for endgame points, while lords tend to provide the most bang for the buck.

Now a quick note about the quality of the game – it is quite simply excellent. I touched on the board earlier, but the same qualities can be said of all of the game pieces really. The land tiles and the bonus point circles from exploration are all thick cardboard. The cards are sturdy enough – not thick cardboard but even after multiple games the edges haven’t frayed and the slightly rounded corners means that they hold up to frequent shuffling better than pointed ones would. The pearls are a nice touch. They are simple little white plastic balls that are kept in plastic cups that are also provided, but they offer a nice tactile change from all of the cards. Still, even lesser pieces like the keys are again thick cardboard that do not wrinkle or fold up. 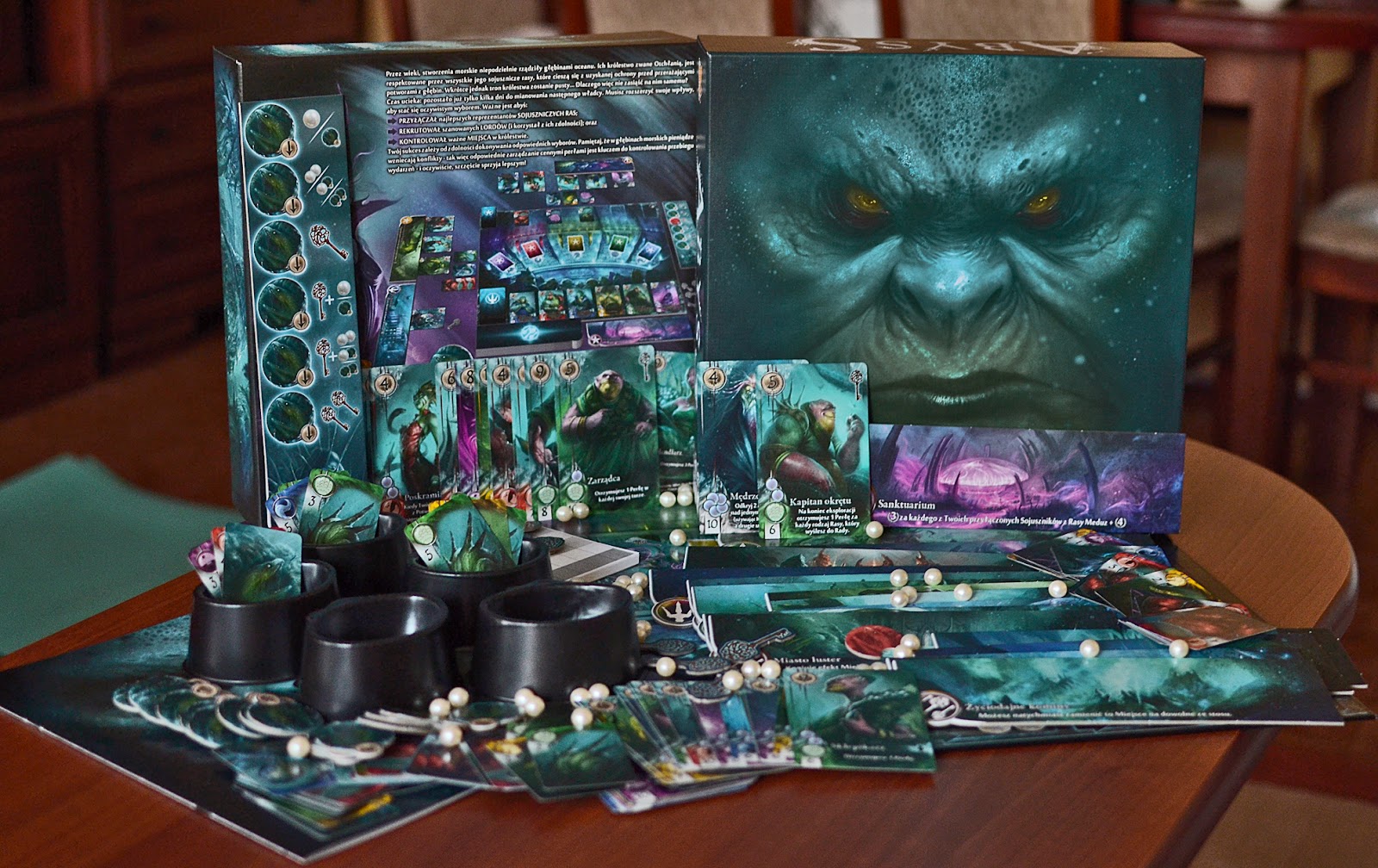 This may be one of the prettiest board games I have ever seen. The illustrations on the board, lords and land are incredibly detailed. They would look right at home in a comic or an illustrated fantasy game. There is an overwhelming use of blues and greens, which help to accentuate the underwater theme, but the purples of the jellyfish clan or reds of the crab clans give each guild its own distinctive hint of color as well. They are all rooted in that similar underwater aesthetic while still feeling distinctive from one another.

Abyss really surprised me – but in a good way. It looked interesting right out of the box, but there were enough pieces and enough empty ‘spaces’ on the board that at first glance it looked like it might be a confusing game. Quite the opposite, Abyss turned out to be quite intuitive and easy to pick up while still providing enough depth that games tend to turn out quite differently from one another while there is plenty of strategy to consider when one weighs the importance of building for points at the end of the game or having resources to play earlier as well.