Dominion is a card game that is heavily focused on strategy – but no small amount of luck either. There is no board at play here (or dice for that matter). In fact, in terms of what the game physically has to offer, there is not much outside of the box, the different stacks of cards and the internal shell which can be used as a card sorting mechanism if you use the cardboard strip down the middle to help identify card types. That is yet. It seems simple enough, and it is once you get the hang of the game, but Dominion itself is anything but simple and incredibly addicting. 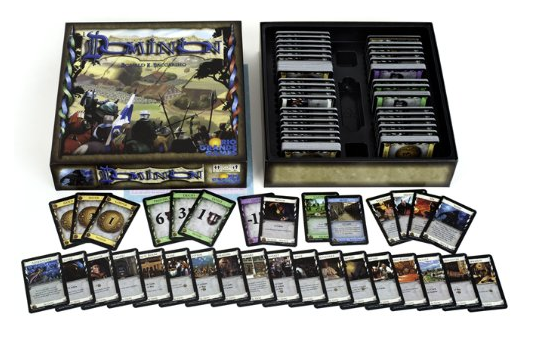 There is a bit of a story behind dominion, where two to four players assume the roles of monarchs who wish to expand their small, beautiful kingdoms. Doing so means acquiring land – which is the game’s primary objective. These cards came in three basic flavors – Estate, Duchy and Province. Respectively these cards are worth 1, 3 and 6 points each. When the game draws to an end, each player counts up these points and the one with the highest score wins.

Coins are the currency of choice. These come in three varieties as well with copper being worth one, silver having a value of two and gold worth three coins each. Every player stars with the same same hand – seven copper coins and three estates. Each player’s hand begins with five cards. On your turn, you can play an action card (these are cards that denote a specific action, such as discarding a moat to draw two more cards or playing a village to draw one more card and play up to two more action cards from your hand. So while your hand may start at five, the right kinds of action cards can lead to long strings where you actually come into possession of many more cards. 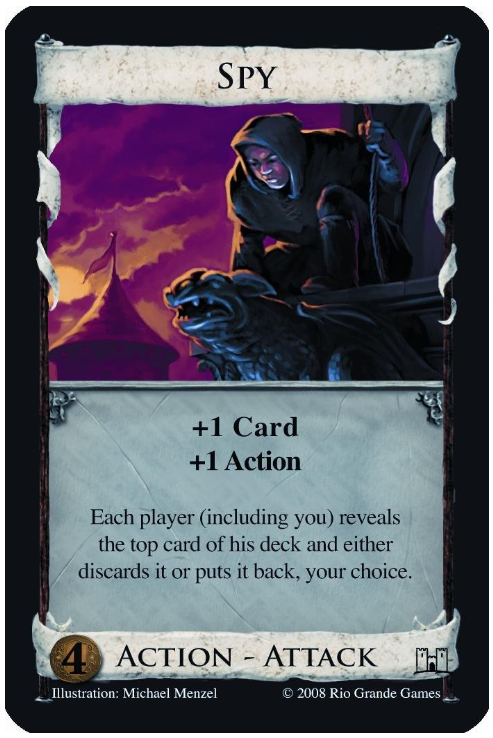 Once the actions are played out, you can then go ahead and count up the coins in your hand. This allows you to make purchases. This is probably the most important gameplay mechanic. The action cards are the most entertaining. Here you can play a Spy card and gain a card, gain and action and take a look at the top card of everyone’s deck and choose whether they discard it or not. Or perhaps you play a woodcutter and gain two bonus coins and an extra buy. These are the most interesting parts of the game to resolve out, but Dominion’s real power is in purchasing with coins.

Unless you play something like the woodcutter that provides an extra ‘buy’ – you can tally your coins and make a single purchase. Additional buys allow you to split your coin and make multiple purchases. How will you spend your coin? This is where Dominion is at its devilish best. Those property cards are often expensive – costing two, five or eight coins to purchase. They also do nothing for you during the course of the game. Load up on them too early, and you risk having hands littered with property cards that prevent you from having any actions or purchasing power. Go too heavy on buying coin cards and you might not have enough actions to play that would give you a leg up on the competition. Grabbing too many actions can mean you wind up with too little of the above two when it comes.

Dominion is a balancing act that works in cycles. You start with that ten card deck, but at the end of each hand, your cards are placed in your personal discard pile. When your deck is played out, you shuffle your discard pile and it becomes your deck. All of your acquisitions become part of a cycle as your deck continues to plump up round by round. At the end of the game, those coins and (most of) those action cards do not help your score at all – but they are the means to an end in collecting property cards. All of these cards come in limited supplies, so if you wait too long to purchase provinces, they could be gone before you get a chance to buy enough. However, focus on them too heavily instead of duchy cards, and you could lose that way too. Here is a site that talks all about dominion strategy and the importance of duchy versus province. 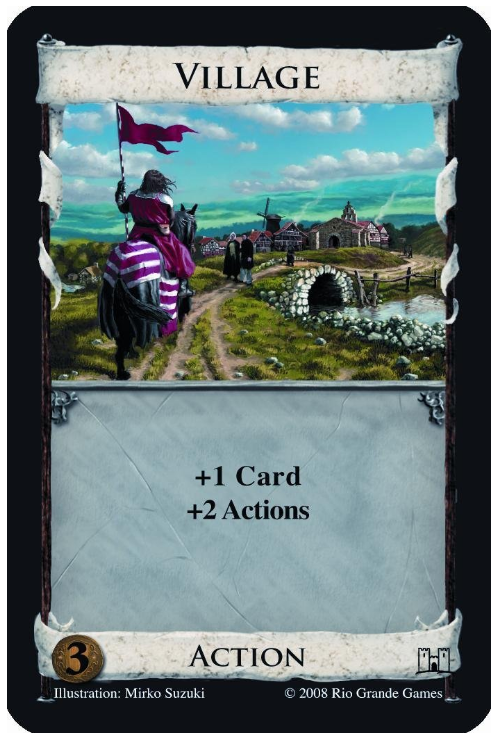 I noted above that the action cards are really where the fun is at, and Dominion helps to keep things interesting by providing more types of action cards than you will use in a single game. This can create a variety of interesting combinations and pairings. Thankfully Dominion’s instructions offers a handful of useful ‘common’ setups players might want to try. The chapel card that lets you trash (that means instead of the cards going to your discard pile to be shuffled back into your deck later, trashed cards are removed from the game permanently) four cards from your hand. That might not seem very useful since you likely spent coins trying to acquire the cards you are holding. However, some cards like the witch can make you pick up a curse card, which is a negative one. So at the end of the game when you are adding up your estates, duchies and provinces – you also have to then subtract a point for each curse card. That chapel might not normally be useful in a game without a witch, but you can bet it is a popular one when players have found themselves on the receiving end of repeated witch attacks.

Those are the basic mechanics, and they can seem a bit complicated at first. Picking up a new game always requires an investment of time. Our first game was with three players and it probably took us about an hour and ten minutes to complete it. We were constantly referencing what we could or could not do with our cards and trying to figure out strategies on the go. By the end of the night after we had a few games under our belts, the same three of us were completing games in about twenty to forty minutes. Because all you have are cards, and the box makes storing them simple, it is quick and easy to set up a game and see it through to completion. 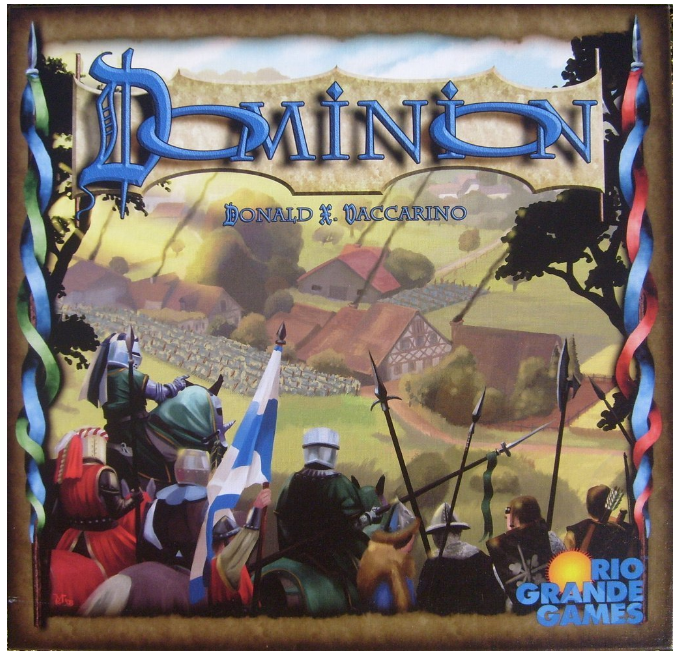 There is a great deal of luck involved. While you decide what cards to purchase and add to your deck, the luck of the draw can decide whether or not you have enough coins to make the purchases you want. There is also minimal interaction with other players. There are attack cards and a defending moat card that can impact each others’ decks and hands, but most of the cards are more passive in that they impact your own actions and coins instead. You are competing, but not as directly as a game like Monopoly where players are regularly bartering or taking money from one another. Also, while the game’s theme is nice enough, in reality there is no practical application for it here. Cards are well made, the artwork on them is pleasant enough, but beyond their naming conventions the story to Dominion is pretty much forgotten by your second game.

Dominion really caught me by surprise. The concepts themselves are not difficult and the game pieces are simply cards, but there is enough creativity in the rules that games can vary wildly from one session to the next. Once you get past the learning curve, Dominion has proven popular with friends my age but also my sixteen and eighteen year old children who want to play it just about nightly now.