comments Share
You are reading
Funk of Titans – Xbox One Review

Funk of Titans is the small development studio A Crowd of Monsters first foray into the console market. Releasing on the Xbox One on January 9, 2015, Funk of Titans puts you in the shoes of the Greek demigod Perseus as he battles his way through 40+ levels to defeat the Titans who are bent on destroying the Gods, Demigods, and the world as a whole. As Perseus you will navigate through funk-filled platforming levels in an attempt to ultimately save the world. Prior to Funk of Titans release, A Crowd of Monsters had released the ambitious mobile title, Sugar Kid, but how does their first attempt at a console game hold up to other well-established studios and their platforming titles? Read on for more information. 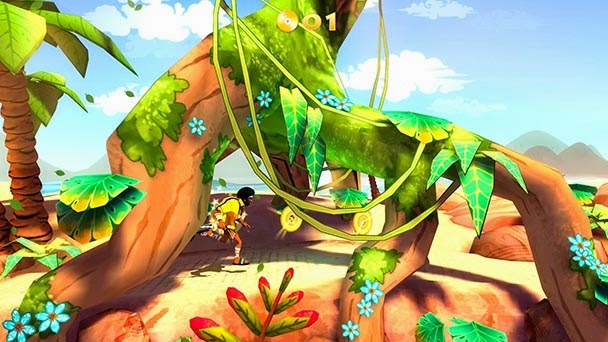 From the minute that Funk of Titans starts up you can feel the mobile roots of A Crowd of Monsters. The graphics, the gameplay, the music, everything about it feels like a mobile game that has been ported to the Xbox One. In some cases porting a title from a mobile device works, but unfortunately that is not the case here. While the graphics are not terrible, there is no imagination beyond the funky 70’s theme and honestly, I would have felt far more at home playing Funk of Titans on my iPad, rather than on my Xbox One. As a side-scrolling platformer there is little depth to each of the levels and while the models and various doodads are three dimensional, the effect is lost and overall it plays like an old 2D platformer. While this can be good, after all, classic platformers are great, with Funk of Titans the graphics work against the game.

Models are lightly animated and all very generic; the game just looks plain. With such a heavy overtone (you know, the end of the world and all), you would think that the atmosphere would be thick with oppressive energies; not so the case here. Instead you have bright and vibrant colors with that awful funky 70’s music playing in the background. It just does not fit well. On top of the mediocre models, so-so environments, and oddly bright color scheme, the graphics are a bit muddy and grainy; another reason that I feel the title would be best suited to the mobile platform. Playing on my 55″ 1080p LED really showed the imperfections in the graphics which could have been eliminated on a small 7″ or 10″ tablet screen, not to mention the overall takes no advantage of the power of the Xbox One, which is a shame, as Funk of Titans could have been an aesthetically pleasing title had A Crowd of Monsters spent a little more time working on a more cohesive appearance. 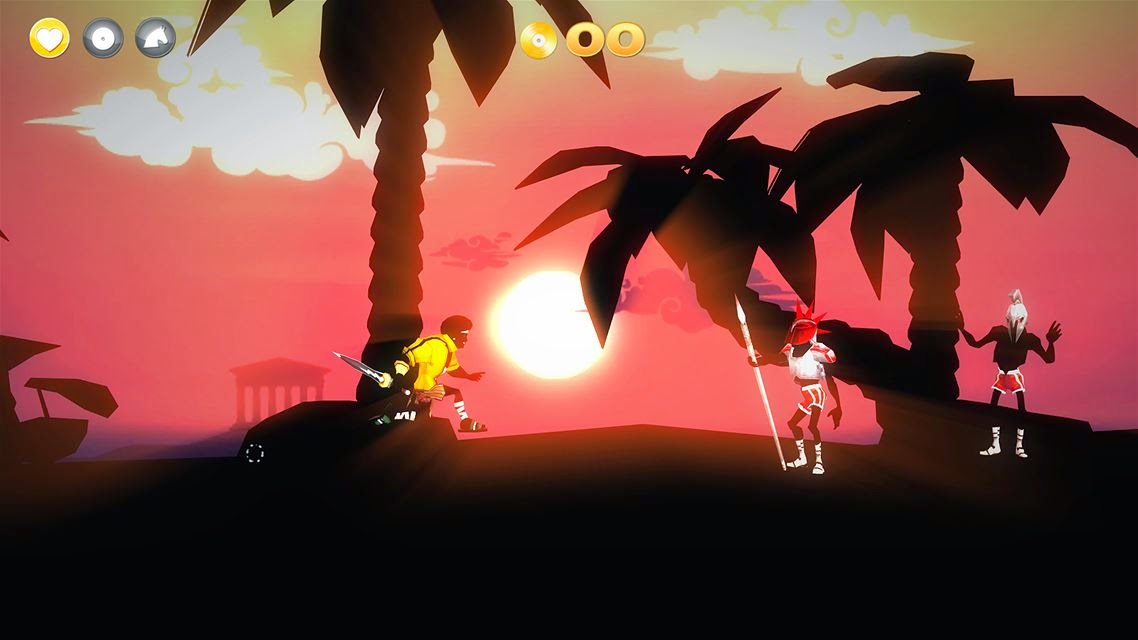 Where the graphics were subpar all around, the audio is split; the music tracks are great (even though I personally detest the music from the 1970’s … just a terrible time in the American music industry) but the voice acting and sound effects are incredibly dull and forgettable. With an excellent playlist, one would hope that the other audio is as high quality but that is not the case. Over-the-top, if flat, voice acting at various parts of the game break any sort of continuity that you may find with the audio. While ‘attacking’ the swings and hits are lifeless and dull, the grunts of Perseus as he leaps around, and the various environmental effects, such as fire pits or the sound of spikes emerging from various traps would all sound far better coming out of the one or two watt speakers on an iPad or Android tablet. As it is, coming out of even the basic TV speakers on my Sony, the sound effects are just poor. While I am not a fan of the music of the 70’s, I was even less of a fan of the language that was used (groovy? ) and 70’s lingo liters Funk of Titans and makes it a game that even I am barely able to swallow.

Funk of Titans is an auto-running platformer with some fairly basic controls; X attacks, A jumps. That is all you need while actually playing the game, though in between levels while you are on the world map you use the Y button to access something of a store where you can change the look of Perseus with some rather bland wardrobe/hair-do changes, or you can purchase new weapons, all of which are fairly pointless. While you are in-level, a simple tap of the X button will make Perseus swing his weapon which will destroy vases and enemies alike with relative ease. This means that, honestly, all you will need to do really is tap the A button at the right time to jump and collect coins, leap over obstacles, or perform a relatively crappy attempt at a wall jump. 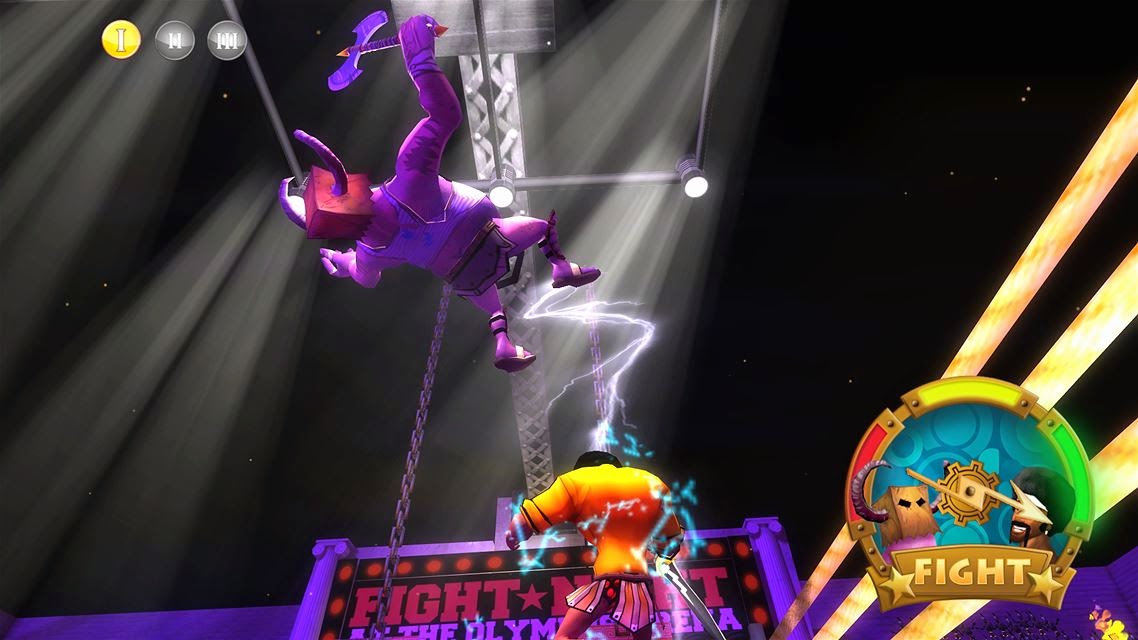 Honestly, Funk of Titans is so easy that my daughter can play it and score 3 stars on every level (level ratings are nearly identical to those found in Angry Birds… again more reason to show that Funk of Titans belongs on a mobile device, not on a home console). Even though my 7 year old daughter can play it perfectly, even she gets tired of it after a few short rounds, which is awfully hard to do. After all, if a 7 year old, who does not play many video games and treats each time she gets to play like the second coming of Christmas, actually gets tired of your game within the first ten or fifteen minutes, you will likely want to reevaluate the title; if a 7 year old is not going to stick with it, chances are no other gamers out there will either.

As a console title, Funk of Titans is just not good. Lackluster gameplay, flat sound effects, poor concept, and a fun value that did not even keep a 7 year old enthralled cannot be saved by a decent soundtrack. In all honesty, porting Funk of Titans to a mobile platform could likely yield a far better experience, as mobile gamers are used to this style of gameplay and may be far more forgiving to the noticeable faults. As a console gamer, I could not recommend this title to anyone except maybe, to some Xbox One-owning grandparents that simply want an inexpensive title that would be safe for kids of all ages, and even then I would strongly recommend otherwise, as Funk of Titans is, without a doubt, not a fun game.