I finished the Hulk some years ago and decided to play it again to write this review. The story is about nuclear scientist Bruce Banner trying to find a cure for his condition, that is, transforming into a green giant who demolishes everything whenever he is stressed. Unfortunately, instead of getting rid of the Hulk, Banner helps a devious colleague of his to steal his power for his own nefarious plans.

The story doesn’t make much sense, e.g. while you pursue Ravage, the evil scientist, you run through vast underground tunnels, are ambushed by an energy vampire and end up in Alcatraz.

The gameplay involves fighting the army as the Hulk and avoiding guards as Banner. When you are the Hulk you hit enemies with a variety of combos, lift big objects and use them as weapons or unleash your trademark sonic clap. Fallen soldiers leave orbs of health or rage energy. When enraged you become stronger for a limited period of time and can perform devastating special moves. Smashing puny humans with a car or kicking them away is satisfying and makes you feel strong. Unfortunately this feeling is reduced by the fact that enemies keep respawning, so you often have to turn your back to them and run to the nearest exit. The boss fights are another special aspect of the game since some tactics are required to emerge victorious. 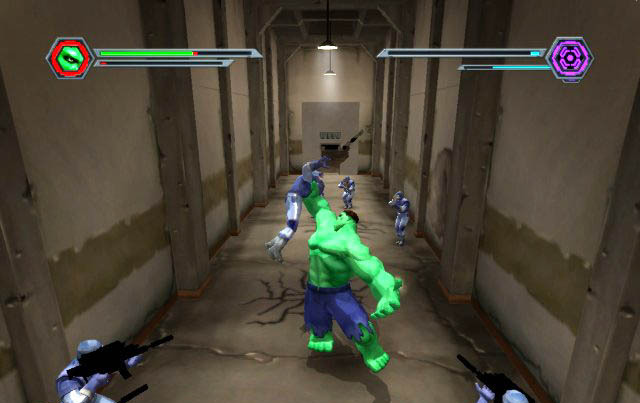 As Banner you infiltrate labs, prisons and other guarded areas, solve simple puzzles and avoid confrontation. If you are spotted you are as good as dead and have to replay the stage from the start. Yes, it’s one of those games. Thankfully, you play mainly as Hulk, who is much harder to be defeated.

The graphics are colorful and convey the atmosphere of a comic. The same goes for the cut-scenes, which have an attractive drawing style. Locations include rooftops, sewers and train stations, among others. When you fight parts of the scenery are destroyed and the explosions add to the chaos. The hero is designed perfectly and his animation is impressive.

Hulk’s growls and the sound effects when he punches humans or breaks stuff are suitable to his ferocious strength. Soldiers say things like ‘you can’t defeat all of us’ or ‘you are crushing me’, making the experience amusing.

Hulk is not memorable but as a fan of beat ’em up games I liked it. It has pleasant graphics and fast, noisy action. I don’t know if it’s better than the movie but it certainly is closer to the comic. 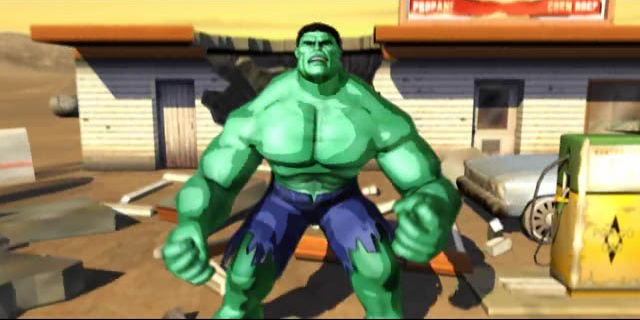