The newest version of Magix Music Maker is certainly a powerful tool, but is it worth the money to purchase an upgrade? That is the question owners of the prior version of the software are no doubt asking themselves. Those who have never used the software and have an interest in creating music should not even hesitate to give MAGIX Music Maker 2015 a try. 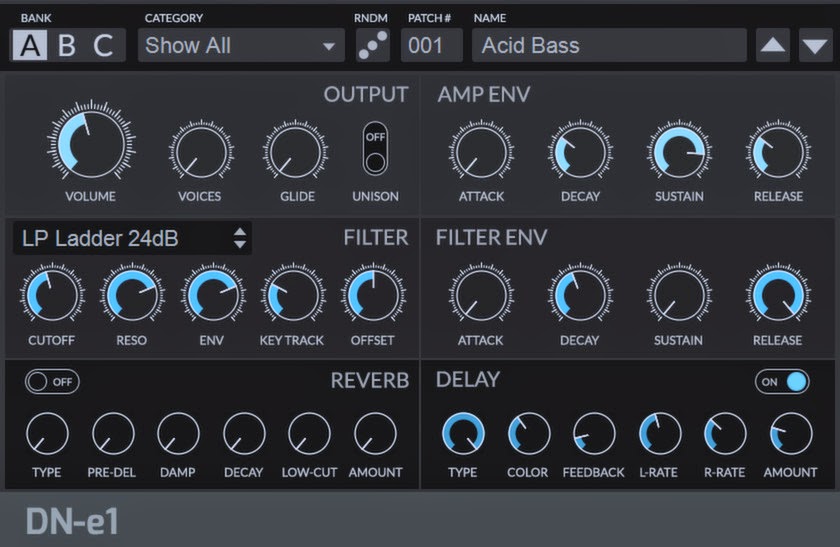 The newest edition is very similar to last year’s iteration, which is a good thing in that the basic system was solid and I was quite fond of the 2014 edition. Before we delve into the differences that set this version apart from its predecessor, let’s outline what distinguishes the premium and basic versions of this program from one another. The classic version includes more than 3000 sound loops contained in 6 different sound pools, while the premium version contains over 6000 loops, in 10 different sound pools. A good thing to note, if you owned a prior version of Music Maker and choose to upgrade your version when downloading, then your previous sound loops will be added to the new ones, giving you a hefty number of loops to work with.

The program contains a multitude of virtual instruments such as Urban Drums, Analog Synths and the Vita Sampler. These are included in both versions and they are all very high quality. The Urban Drums are a good drum set if you’re trying to create hip-hop or dubstep styled beats for your song, with varying presets for different sounds. The Analog Synths are very powerful, with a clean, crisp sound useful for creating a very specific noise conveniently. While both versions have the instruments, they are not handled equally. The premium version boasts a strong number of additional instruments to make use of beyond these. This includes the Celtic Harps, World Flutes, Jazz Drums, Revolta 2 Synth, and DN-e1 Synthesizer. 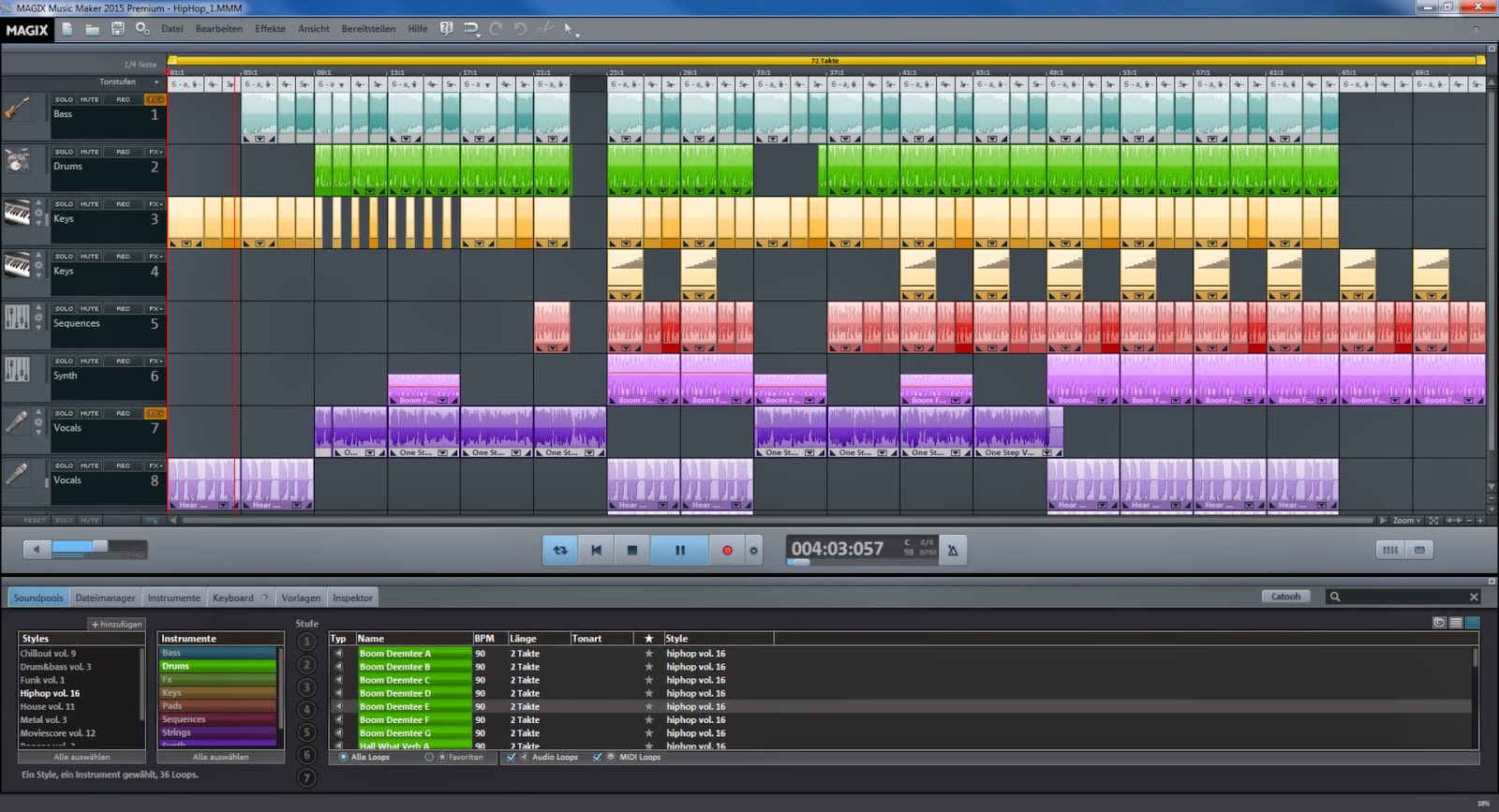 The best instrument is definitely the Analog Synth. I would honestly buy the
Analog Synth on its own just because of the diversity provided here. The
Urban Drums are also really good, but they might have limited
application. While they do not work for something like a rock song, they
are great for pretty much anything electronic, from Electronica to EDM,
you can use the included dubstep/hip-hop drum sets to make a good beat
track that should satisfy most of your needs.

The premium version of MAGIX Music Maker 2015 also inclused a suite with Auto Mastering and an Analog Compressor. The mastering suite is useful if you don’t know quite how to master something, because you can play with the auto mastering and then learn your way around adjusting the specifics. This does a solid job if you just want to use an auto mastering preset, because it picks and chooses the best way to master through your song. Whether you want to boost or diminish the highs, master it for volume control, or just give everything an equal level of volume and tone – these automated options can add a significant amount of polish.

Now for the actual program, there are a lot of good aspects to it, but there are notable negatives worth discussing as well. Starting with the positive, you can have a multitude of tracks, so never fear that you will be restricted when attempting to those vocals or synths. The included instruments are very easy to set up, you just need to enter the instrument panel and double-click the instrument of choice to activate it. Then you’ll get the screen where you can use an on-screen keyboard to hear the ways you adjust sounds, which vary from instrument to instrument, but usually have most of the common modifiers in place on a synth. These menus are quite intuitive and keep you editing instead of bumbling about looking for the proper option. 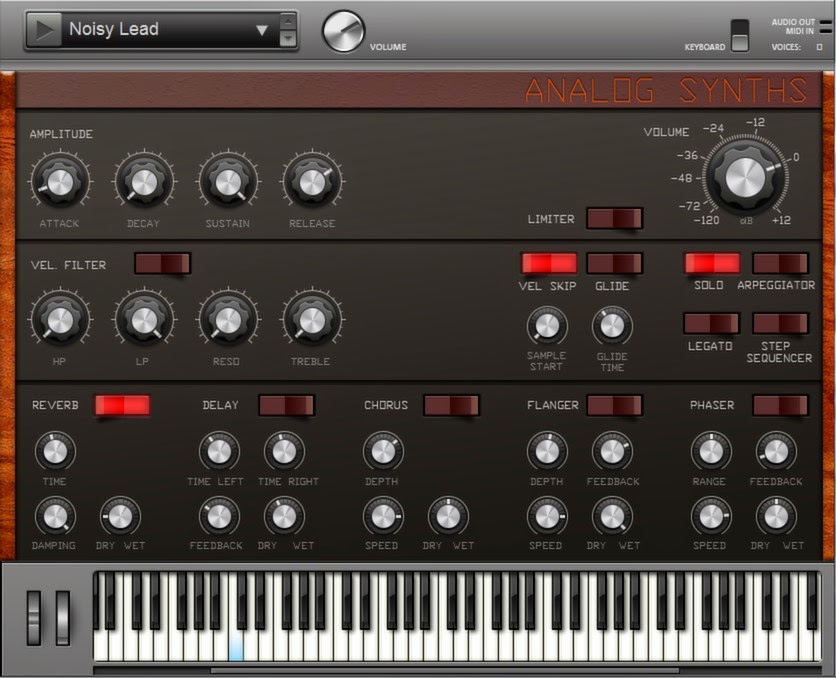 Now I want to discuss the samples. I did mention that if you have owned prior versions of MAGIX Music Maker, then you can upgrade your version and keep all the prior samples. Because I owned 2014, upgrading to this version doubled my samples. As of now I own over 12,000 sound samples, with over 6,000 coming from this version of Music Maker. As with the previous version, all the included samples are of high fidelity and can be used in a wide range of ways. The song included below is made entirely of samples from the new version and nothing more. With this much variety at your fingertips, the types of songs that can be created are really only limited by your imagination. With sample packs ranging from dubstep to chillout and just about everything in between, I spent hours just sampling these sounds and trying to wrap my head around the different ways I could blend them together into something unique.

Unfortunately the software does have a couple of warts, and while they are few and far between, they can sting when they occur. The first and most prominent concern is the software’s stability. I have a high grade PC capable of more than easily any game at maximum settings without crashing or slowdown of any kind, yet more frequently than I can justify MAGIX Music Maker 2015 Premium will hang up and crash. Another stability example is when my MIDI controller will seemingly out of nowhere disconnect, and cease to work. To get things going again, I have to tweak and reboot the software itself. It is not the controller as during these issues other programs will interact with it just fine.

The second concern is related perhaps, but compatibility is sometimes an issue. There was a lot of difficulty involved in trying to get a VST or other plugins installed. In the end I was able to get them all to function, but it required some odd workarounds to get to that point. There is a tutorial for it online provided by MAGIX. While those steps may work for others, I had to do some additional research and found in several forums that I was not the only person who ran into these issues.

Those two issues are real and worth pointing out, but the second one is an upfront investment of time that functions fine afterwards, while the former is a momentum killer that did not occur very often. Those issues fully acknowledged, MAGIX Music Maker 2015 Premium is a spectacular tool for making quality compositions. It is not the most advanced tool on the market, but for those looking for an introductory software application in this area, MAGIX Music Maker has proven to be an intuitive series with a plethora of options that provide you with a large number of creative opportunities.