VoiceAttack was something that came up in my search for simplifying commands for Elite: Dangerous (a truly marvelous game, check out my review at: https://chalgyr.com/2014/12/elite-dangerous-pc-review.html) as there is a massive number of key bindings that can become troublesome in the heat of battle. Once I downloaded the 21-day free trial, plugged in my HyperX Cloud headset and spent a little time training my computer and creating my different profiles, I was “on my way to the races” and this is what I found.

VoiceAttack, more so than any other application on my computer, has simplified my life. That is a tough thing to achieve. Using Microsoft’s Speech Recognition Engine (which takes about 30 minutes or so to set up and train), VoiceAttack recognizes the commands that you give it and applies them to the macro that you set up. Naturally this means that setup can be very intricate and time-consuming but it is absolutely worth it. All-in-all, including training of the Engine, I was able to set up a profile for Elite: Dangerous and create macros for nearly every single binding that I use, in about 1.5 hours. Now, for those out there that do not mind ponying up a little cash, you can buy pre-created, user-made profiles for a few dollars (up to about $15 USD) which could cut a lot of that time down.

But because I am cheap, I took the time to set things up to my own standards and it was well worth it. To make things extremely simple, there are a few different ways to create a command, though I personally used the Recorder function the most. This will essentially record your inputs (and how long things like buttons are pressed) where you can then choose to set the variable to “fire” the macro one of three ways; you can set it to “When I say…” then enter in a voice-activated term. You can also set it up to “fire” on a key press or, lastly, on the press of a button (i.e. via a gamepad). The use of profiles allows gamers to create specific sets of macros specific to different games or application that you can then load when you start up that game. This keeps life simple and organized and that is a good thing.

Once you get your profiles set up (I have profiles for all three Mass Effect titles as well as Elite: Dangerous) loading is a cinch, simply open VoiceAttack, click on the dropdown menu and select your profile, in my case Elite: Dangerous. From there simply play as normal but rather than doing tedious things such as pressing a key on the keyboard to deploy the landing gears, I simply state “Deploy Landing Gears” and boom, they deploy. More intricate tasks in Elite, like targeting sub-systems or requesting docking have also been recorded so if I wanted to target the Frame Shift Drive of a bounty that I am hunting, I simply say “Lock On Frame Shift Drive” and my weapons immediately target the drive, thus crippling my foe. While I use VoiceAttack more for Elite: Dangerous it certainly comes in handy when playing the Mass Effect titles. For instance, in Mass Effect 3 I have macros set up to apply First Aid, Active Camo, Switch Weapons, Firing an Incendiary shot, and other simple commands. 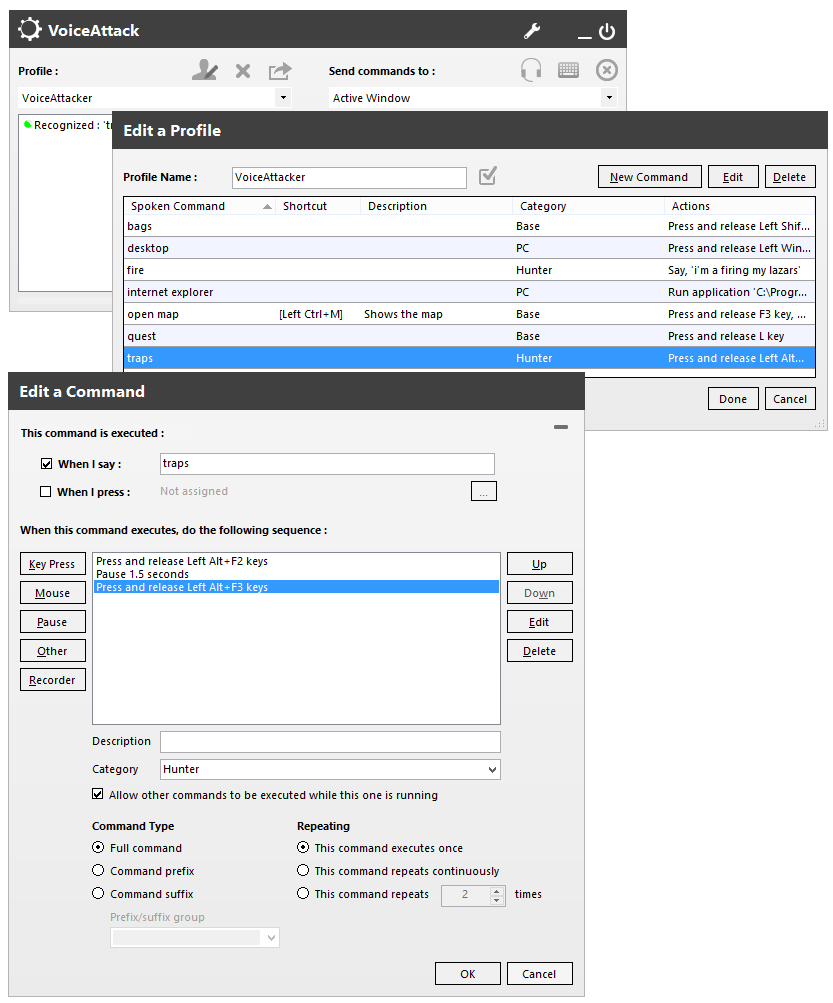 I do have a few more intricate ones set up, such as “Garrus, attack this target” which will have Garrus go through and focus on my target. Now, the downside to it is that VoiceAttack does not know who “Garrus” is so setting the macro up to press the correct buttons then go to the “side” of the UI wheel where you would generally find Garrus (for me, he is generally on the left of the UI, so the macro is set to press the UI button, push to the left, scroll down a few spots, then activate the attack-here UI option). It can be tricky especially if you have Garrus on the right side of the UI wheel, but your macro is on the left side of the UI wheel, whomever is on the left will do what you just told them to. This is not a fault of VoiceAttack though, as it is working as reliably as it can with the macros you provide, so I see no reason to dock VoiceAttack for it.

As I mentioned previously, VoiceAttack simplified my life significantly and this is a difficult task to do. Setting up is easy, if time consuming (pending your game), and best of all, the 21-day free trial lets you get out and try the software before spending the incredibly inexpensive $8 USD for the application. Here is a tip, just buy it, you will not be disappointed. In all honesty, I do not know if I could go back and play some of these titles without VoiceAttack, so much have I come to rely on the software. As the development continues, I am very excited to see what else comes up in VoiceAttack, as it is a lightweight piece of software that I can no longer live without.