Age of War comes in a pretty inconspicuous package. Leveraged against games with really pretty artwork like Abyss or lots of pieces like Risk: Mass Effect, Age of War is much more modest in its first impression. Big things can indeed come in small packages however, and Age of War both promises and delivers a surprisingly deep strategy experience. 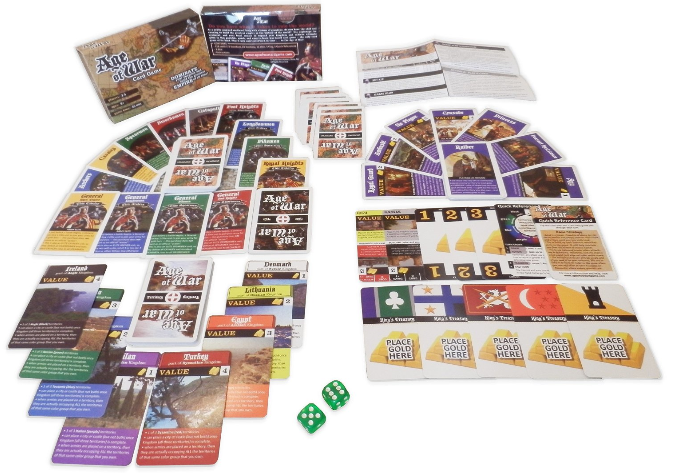 I am not kidding about that box. It holds roughly two decks of cards (118 of them) and a pair of dice. That makes it incredibly easy to take with you, though you do need a good deal more space when playing the game. The three of us occupied about two-thirds of the coffee table while we were playing.This is a game for two to five players.

Decks come in three flavors: standard, elite and territory. Each turn you draw one standard and one territory card (when territory cards run dry, you draw two standard cards instead at the beginning of each turn). You then get to take up to three actions. The player may launch an attack, upgrade a building or play a card onto the table. Each of these things is an action and you do not have to do one of each. For example you can play two cards and pass, or you can upgrade two buildings and attack. Afterwards you can choose to move one army unit. 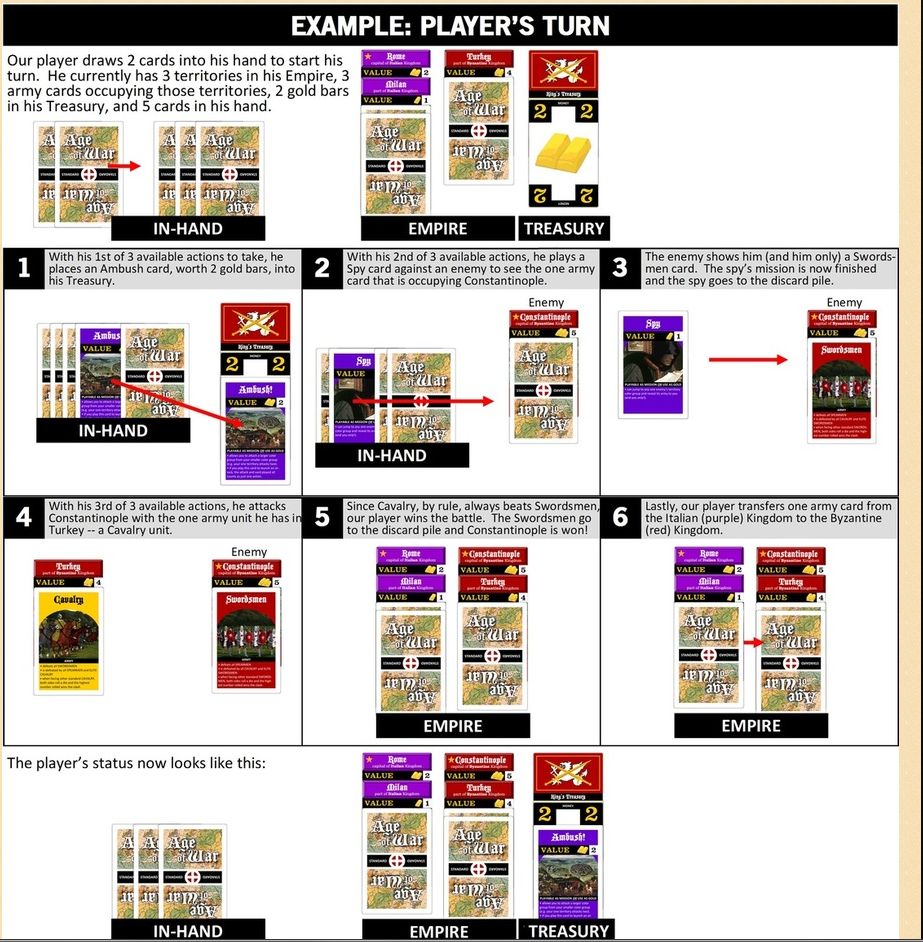 Army units are placed on a territory face down. These can be used for attacking or defending, but the idea is that you do not know what your opponent has there. It could be a useful general or perhaps a useless catapult.

Territory cards and their use will quickly remind you of monopoly. Each kingdom is made up of three colored territory cards. These are drawn every round, so if you are incredibly lucky you might get all three over time, but most likely your opponents will draw at least one of them. If you manage to get all three, you can then put a building card onto it. These building cards offer special perks such as extra actions, extra drawn cards at the beginning of battle or the ability to be free of attacks unless your opponent is using a catapult army card.

Territories are very important for three reasons. One, they can be used as currency of a sort. Two, the buildings set up on a completed kingdom are a significant advantage. Lastly, they are your end objective. For example, when playing with three people, the first one to assemble five kingdoms wins the game.

There are a handful of cards that can be used during your action phase called missions. These missions often impact an opponent’s army or allows you to collect gold from an opponent. You can also use these mission cards by placing them into your treasury instead of activating their power. The treasury allows you to pay off your opponent when they seek to collect your gold via a mission card – just like when you land on someone’s property in monopoly. If you lack the money, you need to sell your territories to them. That is one of the two ways for a player to collect opposing territories.

The other is through combat. There is a handy color wheel (this is on the reference card) that restricts which colored lands can go after which. For example, if you have soldiers on your purple properties, you can attack either purple, or the two flanking colors on the reference card (blue and red for example). Your units cannot however, cross over to a completely different color such as white. 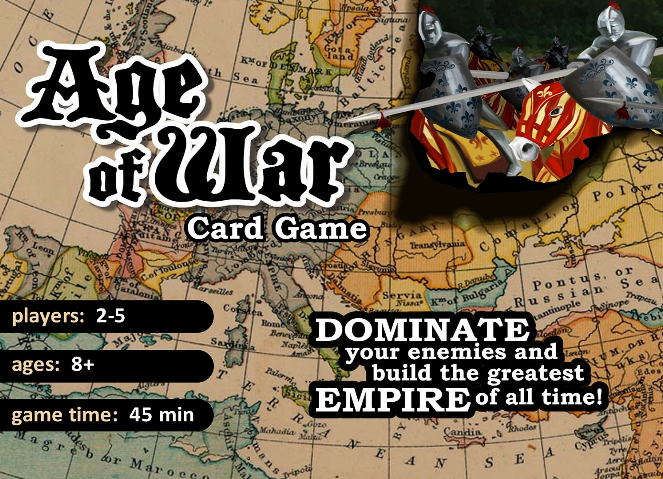 Combat plays out in a somewhat rock-paper-scissors format. There are three base cards, each weak to one type and dominant over the other. The attacker and defender set their stacks aside and turn them over one at a time, allowing each fight to resolve. There are some wildcards in there, such as archers (or if you both are using swordsman for example) that require a roll of the dice to break the would-be tie, as well as elite soldiers that have some other advantages, but combat plays out very quickly as a result of the predefined rules.

The first game took us about an hour to figure out, but the next two completed in about thirty minutes. The box says to expect games to last about forty-five minutes, but it seems to go slower with four or five players than it does with just two or three. The core mechanics of Age of War are very sound and it is fun to play, but it does feel like there is some room for expansion. By the end of the first game we had literally seen every card there was to see.

The combat element is certainly interesting for those looking for a bit more interaction between the players than a game like Dominion has to offer, but there are no extra cards or flavors.This could be a tall task since the armies are built around this rock-paper-scissors dynamic, but more mission cards and more buildings would be a reasonable option for future expansions.The cards that are here look nice with plenty of well-drawn portraits. There is not much else to them however, and they are not perhaps as eye-catching as some games such as Abyss, but rules and illustrations are clear and easy to look at.

There is a surprisingly deep game in this little box of cards. it is actually surprisingly quick to learn, though there are a few nuances to remember until you have a couple of rounds under your belt and you are familiar with the ebb and flow of the game. Age of War successfully straddles the line between approachable accessibility and deeper strategy – not an easy balancing act. As a result Age of War should have broad appeal to a wide range of gamers.