Artificium is a card game built around developing resources and using them to advance your token across the leaderboard towards victory. The premise is surprisingly simple and the game is geared for two to six players as they try to turn wheat and wood into resources such as beer and food. These in turn can lead to even more expensive resources as you do your best to grow your own resources while hindering the growth of your opponents. 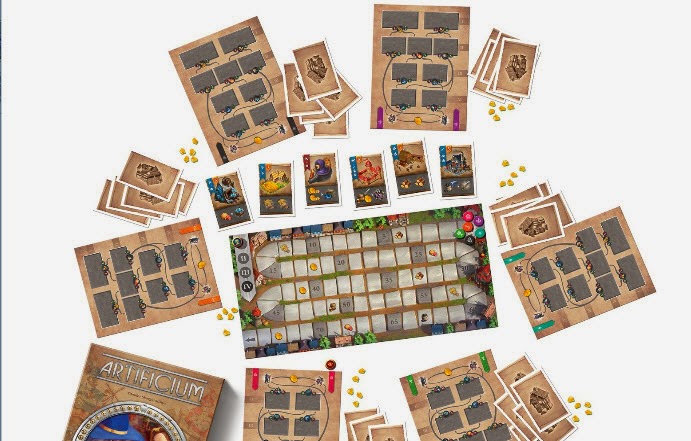 The medieval theme revolves around knights, castles and wizards with appropriately solid quality materials. The board has a similar thickness and finish as Asmodee’s other recently reviewed game, Abyss. The board is not quite as broad however, and the cards are of plastic composition that keeps the edges from fraying or the surfaces from wrinkling. Also like Abyss, there are crystals (similar to the pearls used as currency in the underwater themed game) that are used as markers and currency in Artificium as well.

That is where the similarities between the two games ends, however. While the artwork on Artificium is pleasant enough, it lacks the impressive detail and fantasy colors found in Abyss. The gameplay itself is also not quite as varied as many other card games either.

The premise here is a fairly simple one. Players draw cards and then cards are also placed on the table next to the board. Cards all serve basic functions. The most basic of those are cards that provide wheat or wood. Other cards serve as conversions that can turn wood into food or coal while wheat can create food or beer. These options are all illustrated on the individual boards each player receives at the start of the game, which looks like a flowchart once you understand the basics of resource improvement. 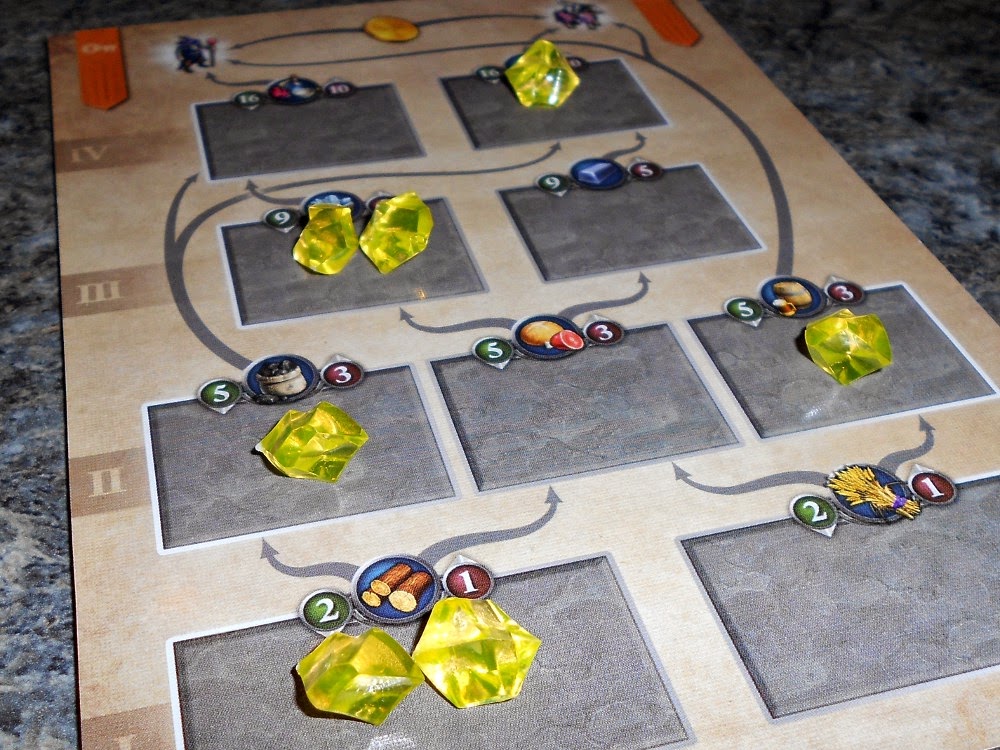 Other cards occupy the deck as well. Some of the most notable are thief cards (which allow you to pay to steal level one or two resources from an opponent), cards which give you coins for every move you have played on the turn and cards that let you take a card from your opponent’s hand – to name a few. While there are some cards that lead to player versus player interactions, much of Artificium’s gameplay boils down to luck and managing one’s own resources effectively.

Once your turn concludes, do you sit on the more powerful cards you lack resources for currently, or keep it in your hand in case you get the one or two you need to complete it? As one’s resources work their way up the flowchart board, they gain more victory points as well. The higher up the board, the most points that resource is worth. This allows the players to move their pieces along the board. The two most powerful resources come with additional ability as well: one allows you to move an opponent back four spaces while the other lets you draw five additional cards.

Resources can also be purchased or sold for coins – but it is in triggering them using the cards that a player is most likely to win the game. Artificium is a relatively quick game, even with four or five players. With three, it is over in about twenty minutes. This is because a game of Artificium is restricted to four rounds. Each player gets a turn every round, but after that the players cash out their remaining resources and add up their gold (dividing it by four) to make one last push onto the board. Whomever is the furthest along, wins. 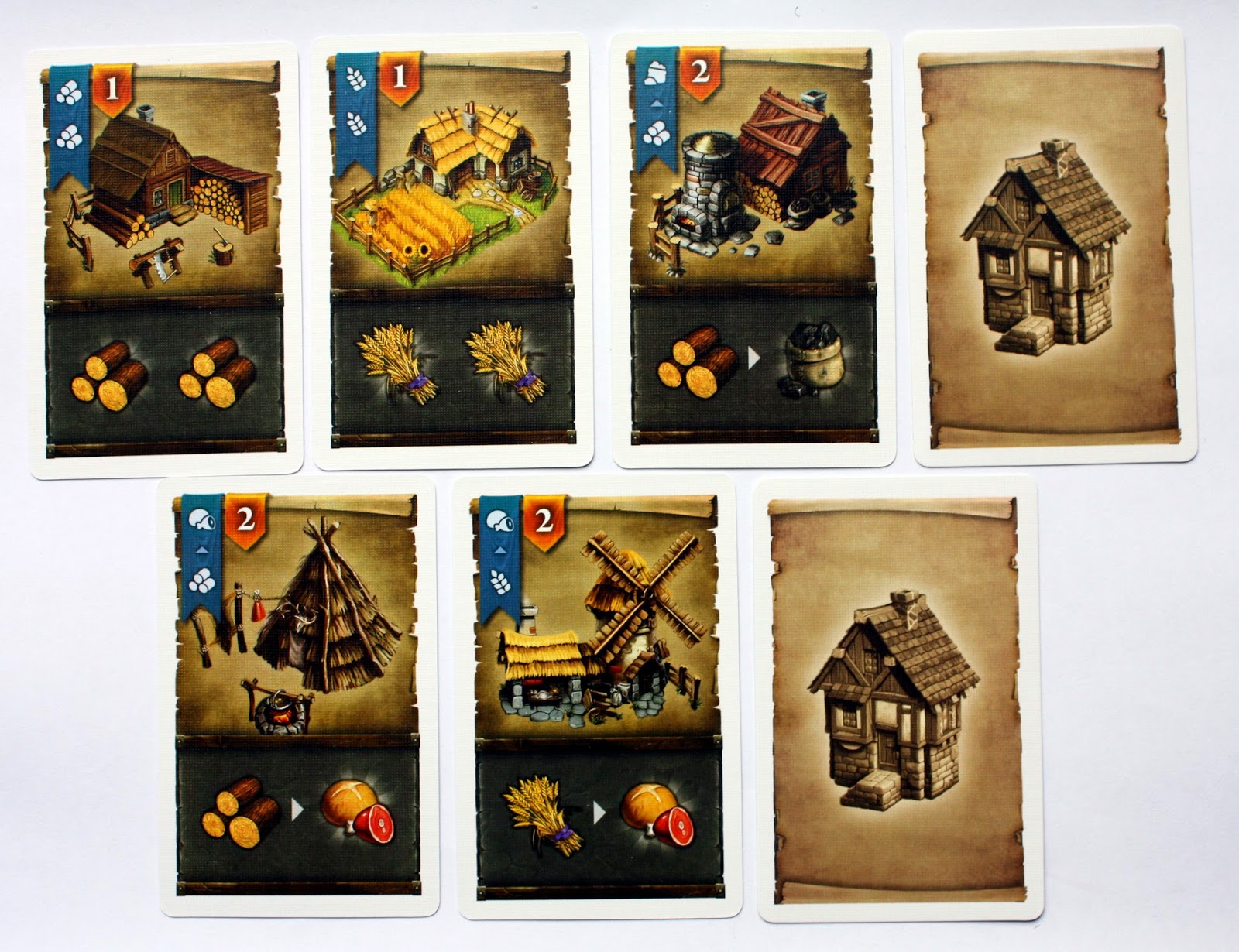 As I mentioned above, there is a lot of luck to be had here. It feels a bit less like strategy and a bit more like good (or bad) fortune than anything. With only four turns, you really have to make each turn count. Generally the person putting together the most wizards winds up winning (they allow you to draw extra cards, chaining together extra turns in your round). The cards themselves are in many ways indicative of how Artificium plays. There are no words – just some images and values. Each of the cards is described in some detail in the instruction sheet, but this is a game that flows quite quickly once you understand the conversion mechanic.

Artificium falls into that category of a well-constructed game that is easy to learn and quick to play. Artificium is an excellent filler game. Our first round while learning it took about forty minutes or so, but the next three games (with three players) averaged about twenty to twenty-five minutes to complete. The strategy elements are not as deep as some other games, but this lends Artificium its brisk pacing that makes for fast and fun game sessions.