“What did Robert get me into?” were the first words out of my mouth as the various screens of dialog went by. Not having played something this heavy in instructions in a long while I read through all of the menus and instructions until the fateful press of “Fight” after setting up my first fleet through the tutorial. Once that fleet launched there were only a few appropriate words left: “This is so sweet”. 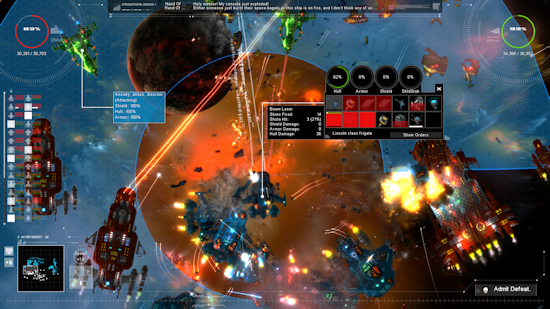 Gratuitous Space Battles 2 puts players into the tactical planner’s seat as they set up entire fleets from the star fighter squadrons up to the cruisers and dreadnaughts before they launch into battle against fearsome enemies.

What I found quite different from lot of other experiences that I’ve had, especially in the realm of Real Time Strategies, was that once your fleet launches, that’s it. Sit back and watch as they dominate or are decimated by the enemy forces. This was perhaps the most exhilarating part of it all, your choices in regards to formations, escorts, and what style of ships that you send in truly matter. The theater of war can be different sizes allowing for smaller or much larger fleets to face off against one another, sometimes with an asteroid belt down the middle because why not?

Visually GSB2 is very flashy with gorgeous ship designs. Starting off with sample designs, players are then able to take existing ship models or unlock newer designs and parts to modify or create ships of their own. This ship design quickly become the focus of the game as players experiment with hundred of different fighter combinations. Each custom ship design can be saved and named as you see fit to keep an easy track of what design does what. Once the ships have been configured (armor, shields, weapons, power, and, depending on the size of the vessel the appropriate number of crew members) players can set out to start decorating with various colors and design elements to make their ships unique. While I didn’t spend that much time making my ships look awesome, I did spend a bit of time changing up the colors so that I could easily spot the various layers of my fleet as they did battle. As awesome as blue looks… not in space if you want to see. 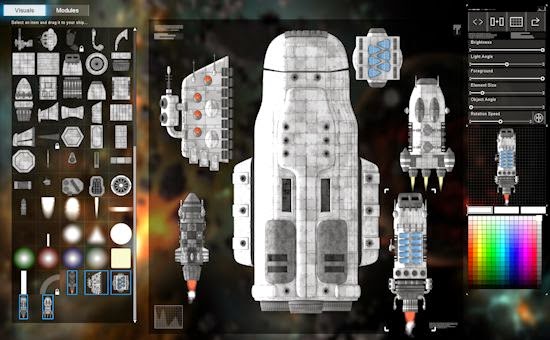 What impressed me the most with the ship editor options were the various sliders to show players even before launching into battle what a ship will look like depending upon where the light sources are coming from. The level of detail available was quite impressive.

Being still within its Beta stages there have been quite a few crashes but nothing that was really game breaking. Loading up and going through the menus once you get a hang of everything is rather smooth, especially when everything from ship designs to fleet layouts can be saved.

This was awesome and I’ve spent quite a few nights putting in multiple battle strategies and ship designs to see if I could come out on top. There is still a fleet that haunts even my waking moments but I swear that the theater of war will be littered with their broken hull plates and not mine… eventually .