Do you remember that time you were playing Dungeons & Dragons and you worked your way deep into the cavern in search of loot, fame and fortune? Do you recall that same adventure where you kicked open the door to a new level only to be… confronted by an undead pony who was quickly assisted by an evil lawyer? I bet you handled the situation by donning your your Boots of Butt-Kicking or the Mace of Sharpness, right? If the answer is ‘yes’, you are probably thinking of Munchkin Deluxe and not Dungeons & Dragons, which is just fine because Munchkin pokes plenty of fun at fantasy standards while injecting its sense of humor into a surprisingly deep board game. 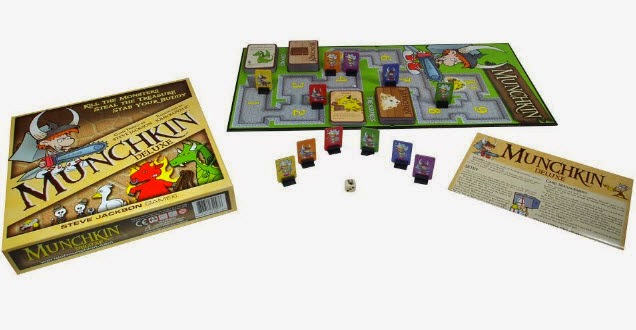 For those who played the original Munchkin, I believe the primary difference between that game and the Deluxe version is that this one comes with a board. All of the players start at the bottom of the board, working their way up one level at a time. Turns are simple in and of themselves – but it is what happens outside of a player’s turn that keeps Munchkin incredibly lively.

There are two decks of cards – doors and treasure. When it is your turn, you draw a door card and flip it over. Whatever you see is immediately applied. If the card is a curse, you might have to ditch a piece of gear, lose a level or take a combat penalty into your next fight. If you turn over a monster, it is time to fight. Combat is quite simple – at first. The monster has a level, and that level is its power. Players have a level, and that is their power. Players can also equip weapons and armor they find from treasure cards during their journey. If you happen to have a weapon and a helm that add two points each, and you are level three, your character is therefore wielding seven points of power. Level six creatures and lower would therefore be beaten. 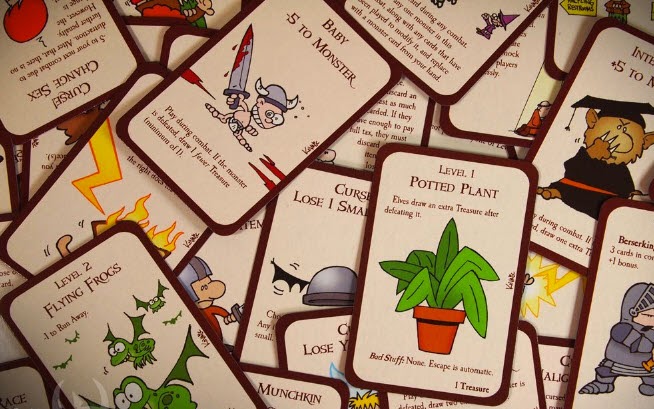 Combat is the thrust of the action here, because it is the primary means of advancement (or stagnation). If we use the above example and win the fight, the character now gains a level. This serves two purposes – it makes the character one point stronger in combat and they are closer to the end of the game since the first player to reach level 10 wins. Some incredibly powerful monsters can even grant two levels of promotion. Another benefit to beating a monster is that you gain treasure cards. The easier the enemy, the fewer the treasures. The higher level the monster is, the better your haul.

While the basics of combat are simple, things can get convoluted in a hurry. Some monsters get bonuses against certain races or classes. Opposing players can – if they have the right cards at their disposal – beef up either the player or the enemy monster (or even send in reinforcements for the monster). In this sense, Munchkin is one of the most active board games I have ever played. Since much of what you can do happens on other players’ turns, there is very little sitting around waiting eight minutes for your turn to come around again. It also presents a good number of quandaries and strategic options. I will explain one near the end of this review. 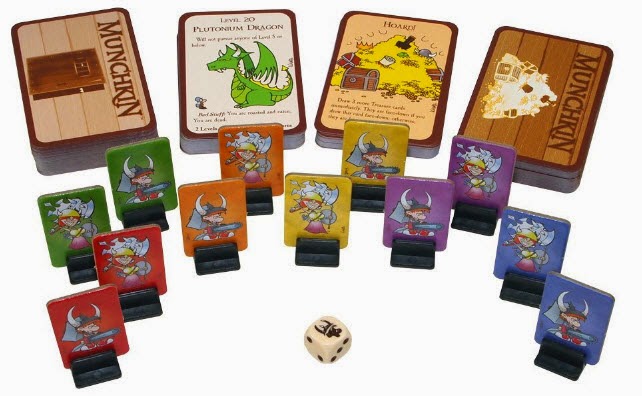 For now, I wanted to talk about a few more of the game’s mechanics. Among the cards you can draw are races and classes, which give your character a distinctive feel. Some weapons can only be used (or are in fact restricted from use) by specific races and classes. The Staff of Napalm is strictly wizard fare while some heavy armor might only be usable by non-wizard classes. Just because you cannot use a treasure now however, does not mean it might not prove useful later. Your class and race are capable of being changed, plus selling enough items can give you enough ‘gold’ to raise you one more level. Additionally Munchkin encourages conversation and trading between players. The key to winning is helping yourself without helping the other player too much. I am not above powering up an opponent’s monster and then offering to help them – if they give me all three of the treasures they would win from combat.

What happens if you do not draw a monster while kicking down the door? Then you have one of two options. You can choose to further explore,letting you draw another door card – but this time putting it in your hand instead of playing it on the table. This can give you curses to play on others later, or monsters to use for yourself or against others. If you choose not to explore further and take a door card into your hand, you can play out a monster from your hand and fight it then and there. Make sure it is a lower enough level creature that you can beat it – and just hope none of your opponents power it up. What if you have a high level creature in your hand? With the right cards, you can unleash that more powerful creature on an enemy when he is battling his own monster – making his prospects for victory that much more challenging. 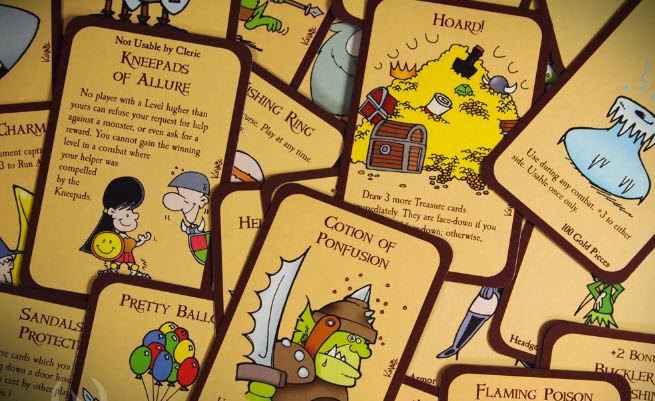 The humor in Munchkin is immediately evident, from the names of cards to how the instructions are explained. The writer was not afraid of pun, poking fun at people for being Classless (in theory he means not having a warrior, priest, rogue or wizard class card – but if you want to take that personally? I don’t think he cares). There are several places where loud debate is encouraged.

While Muchkin Deluxe is is a game that generally keeps things moving forward, there are plenty of things that can cause a player’s progress to stagnate as well. I will now describe that one round of combat I alluded to above. Three of us were playing the game and Chris was well ahead of Rae and myself. Rae and I had to keep throwing cards at Chris’ monsters, because he was on level eight – and then made his way to level nine due to a card he pulled that gave him an instant level up. Through our combined efforts, we were able to keep Chris out of that tenth level until the two of us joined him in level 9. Now all three of us were one move away from victory.

Since almost the very beginning I was holding three cards that gave me two very interesting options. The focal point was an illusion card – which allowed me to swap any active monster being fought with another in my hand. I had a level two and a level eighteen creature in my hand. All game long I had been wresting with the decision to level myself up by swapping out a tough battle with the level two card or by swapping out on of Chris’ battles with the level eighteen in hopes that the creature would stop him. 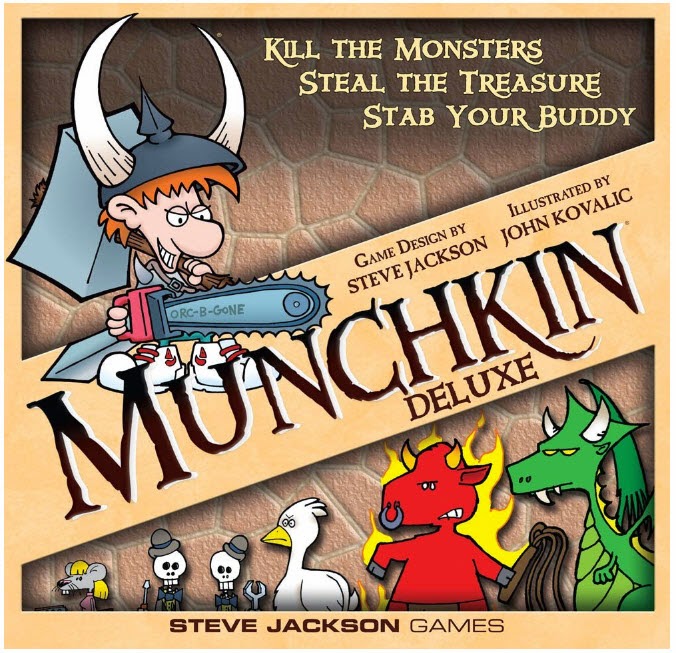 Now that we were on level nine together, I wound up with a tough opponent in front of me that Rae and Chris were both powering up. One of them even cast a card that duplicated the bugger. I turned one into an almost harmless level two skeleton when it was said and done, and I managed  to sneak into level ten for a hard fought victory.

It was a great win that had all three of us talking for about five minutes. It took us about that long to shuffle up the two decks of cards and then kick off our fourth straight game. While I keep my bragging rights from that last victory, it only took one more game for Rae to fashion her own victory using an elvish rogue that obliterated me on her way to victory the next time.

Munchkin Deluxe is silly, irreverent and an incredibly entertaining. Many of the board games I have been playing lately have some light elements of player versus player, like Dominion – but Munchkin ratchets things up several notches from there. I remember several times Rae was telling Chris that, “It isn’t personal.”. To which he replied, “You just beefed that Plutonium Dragon I was fighting up by fifteen points. It’s definitely personal.”

Bring on the next game!