Munchkin Deluxe caught me completely by surprise when we played and reviewed it recently. I knew nothing about the game, but our group found it immediately addicting with its unique brand of humor and the mechanics that have players interacting with (messing with is probably more appropriate) than most other board games. 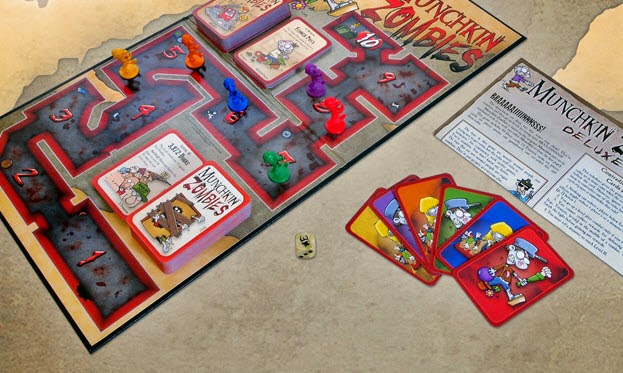 At its core, Munchkin Zombie Deluxe is very similar to its fantasy counterpart. That is probably a good thing given how popular the title was among those of us who played the card game. Essentially each player is in a race to reach the tenth and final level. Progress comes in the form of kicking open the door to next level (do not actually kick your doors at home, unless you enjoy home repair. If so, stop by my place and help me fix a bunch of things) and turning over a card from that deck. You might get something useful or dangerous that either applies to you immediately or gets tucked away for future use. Most of the time, you turn over a monster.

Except here, you are the monster really. What you are turning over can be a scientist, a little kid or a police man for example. The math is simple – you take what level you are on, add and take away the various modifiers on your character and then compare it to what level the enemy is (and any of its potential modifiers). If it wins ‘bad things’ happen to you – ranging from lower level creatures just making you lose a level or discard, to the higher level ones killing you (killing you more? Making you deader-er?). 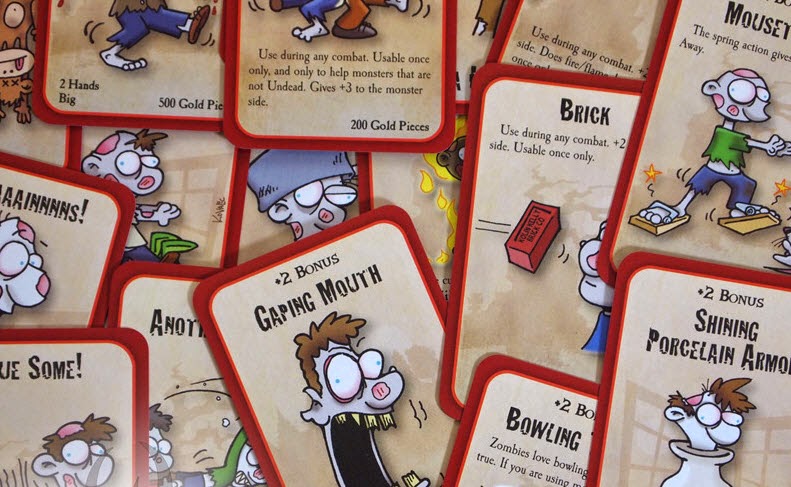 The early levels give you an opportunity to acquire treasures and useful cards. Most of these are fairly easy to traverse and leveling happens quickly in the beginning. Later however, players need to start working against one another. After all, there can only be one winner, right? Suddenly players are making deals with one another, playing curses on each other, or boosting the monster the player ahead of them is currently fighting. One of my favorite aspects to the original Munchkin game was the way it prompted players to interact with one another (don’t worry, it’s definitely personal). Zombies retains that same feeling, but trades in its fantasy trappings for a more B-movie horror theme.

There are a handful of changes that come with this new edition. For one, there are new powers that zombies can acquire. Gone are the races and classes of Munchkin Deluxe, but here you can have mojo and powers that give you additional. The trick with the powers is that they have ranks on them. That stealth card sure looks handy (it actually allowed Chris to survive and win a match because I could not send a monster after him to help assist the one he was fighting), but it cannot be used until your character is level four. 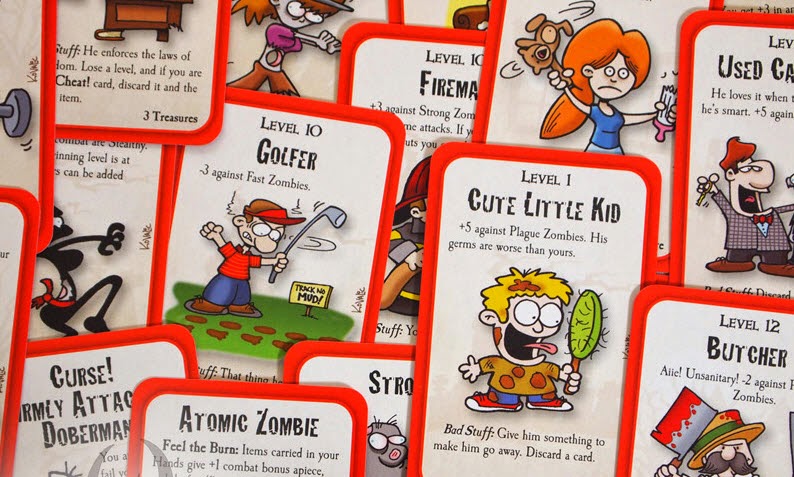 Balance seemed a bit more precarious in this edition than it was in the standard fantasy game. Maybe it was just incredibly good luck, but Chris had a ton of gear on at one point that prompted me to lean over and question how he could be wearing it all. It feels like the equipment is a bit less restrictive in this game however, because he was in fact wearing it all because it did not have designated spots or classes to be met to be worn.

The set itself is another well-made one. You have a board to help visualize the character advancements, complete with little plastic zombie figures of varying colors. There is a single six sided die for when one must flee their opponents (this is where being a fast zombie like from 28 Days would be ideal). There are also two decks of cards that help represent the items and the encounters. It is also worth noting that the instructions are still quite clear, and better yet just as charming as ever. 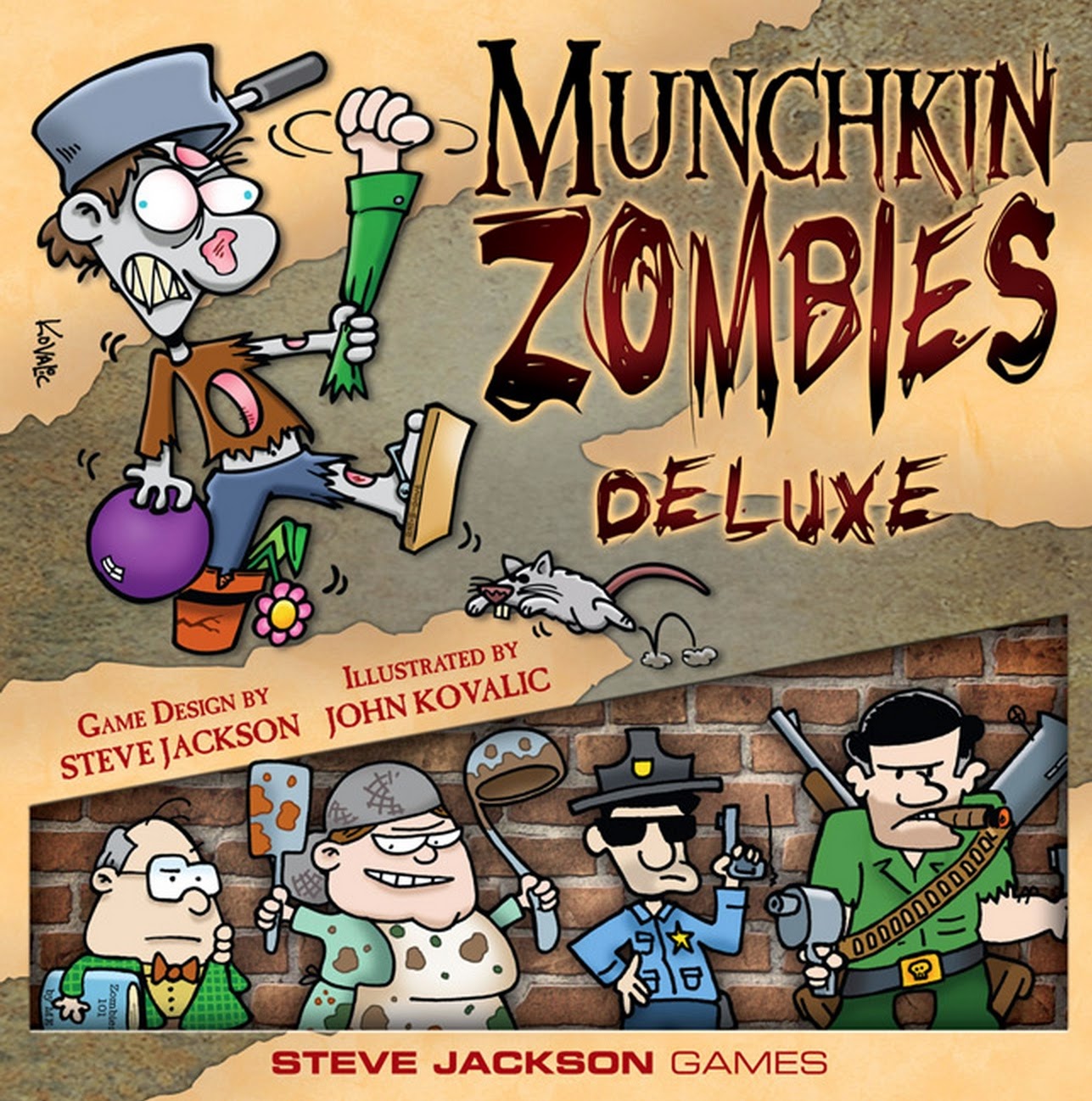 For those who play primarily for the humor? Rest assured that a lack of brains in no way inhibits the laughs here. In fact, the variants on the word ‘braaaaiiiiinns’ on some of the cards is pretty amazing and made for some of our table’s biggest laughs. Chris in particular brought some gusto to it a few times. That is really at the heart (or the brains?) of this title, in my opinion.

Munchkin Zombies Deluxe encourages lots of conversation, plenty of zany humor all structured around a randomized card game where luck and strategy are key in nearly equal measures. It does not take a lot of chances with the source materials, but flipping the script and making the players zombies was a stroke of brilliance that pays off nicely in roughly half an hour bursts.