Relic Knights was a Kickstarter project that absolutely demolished its goal; posted by CoolMiniorNot with an initial goal of $20,000, Relic Knights landed just over $900,000 in pledges and was successfully funded launched in 2012 and since then has developed quite the cult following. Relic Knights is a sci-fi strategy game eschewing either the standard “wargaming” concept like Robotech RPG Tactics or Warhammer 40,000 as well as the standard “board game” concepts like you will find in traditional tabletop games. Using unpainted and unassembled miniatures that range from roughly 30mm to 60mm, you can choose one of six factions to wage war against two or more of your friends.

You have the Shattered Sword Paladins, a force of devout warriors defending the Alliance from chaos. Additionally you have the Cerci Speed Circuit, a band of daredevils and risk-takers, there is also the Black Diamond mercenary force, the Noh Empire which is a force or terror and might. You can also choose from the Star Nebula Corsairs, a group of rowdy pirates, a group of dedicated scholars, Doctrine and finally, you have the Prismatics, a force that is somewhat chaotic in nature but strict to their own moral codes, though their beliefs allow them to align with the forces of good or the forces of chaos. We were lucky enough to be sent a few starter forces for the Black Diamond mercenary group and the Shattered Sword Paladins and here is how it plays out.

As with most miniature games some assembly is required. While I thoroughly enjoy building miniatures, those that came in the Shattered Sword Battle Box gave me no end of frustration. Though I am well experienced in the building, customization, and painting of miniatures, the Shattered Sword mini’s are relatively complicated without any sort of guide or instructions. To save space, the Battle Boxes are relatively small which means the units have all be removed from their sprue’s which leaves plenty of jutting edges and awkward pieces throughout the various pieces. Simply cleaning up the models themselves was a time-intensive effort and the larger part of me wishes they would have shipped the units still attached to the frames. Once you open the larger bag that contains the various pieces you may be somewhat overwhelmed by the sheer number of appendages, weapons, and small effects that sit in a haphazard pile in front of you as I was, and I am a veteran wargamer …

There are a few of the miniatures that I have put together that I am more than positive have been assembled incorrectly even though there are very slight guideposts that should help determine what part goes where; unfortunately though, due to the fact that the individual pieces were not attached to the sprue the small posts for each appendage was relatively indistinguishable. I would strongly recommend that moving forward a basic instruction guide for how each mini should go together should be added to the battle boxes. The Black Diamond Battle Box was far easier to put together though, as the variations in the units were limited and each piece simply fit together. 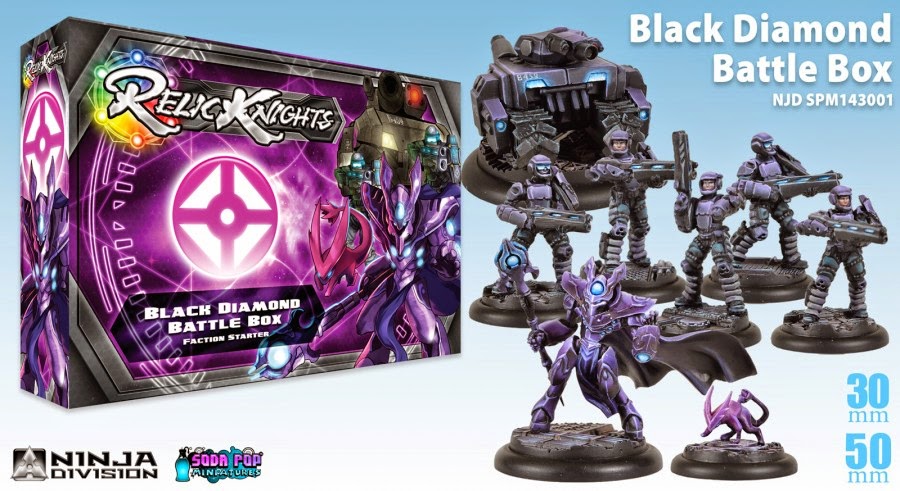 Painting either the Black Diamond or Shattered Sword units is definitely not for the faint of heart though, as the minute details that are all over the models can deter some beginners or newcomers from being overly creative with their colorings. With the Black Diamonds, the basic units (The Black Diamond Minion Squads; essentially simple riflemen) there are grooves all over their armor and while each unit is wearing a helmet, a part of their face is exposed which can lead to some very bland features if a gamer is inexperienced with the Dip Method of painting. The Shattered Sword units were no different, as their heads were smaller and the armor that they wear is far more intricate. However, if you can manage to get a good solid coat of paint on them and pay attention to the details, you can have some absolutely stunning miniatures.

Setting up a game of Relic Knights is fairly simple; prior to the game all players decide on a point value for the army and then you decide your particular miniatures based on that point value. For those that have been a part of the wargaming scene for any given amount of time will recognize this particular rule, as it is standard in those juggernaut titles like Warhammer/Warhammer 40K and Robotech RPG Tactics. Once all parties decide on a point value (ranging from an Encounter which is 35 points to a Battle which is 100 points) you select your units then layout your dashboard, which acts as a mat where you store your unit cards, Espers, Tokens and other necessary information. Once your point values and armies have been selected and your Leader chosen it is now time to set up the battlefield. Now you can go through and simply play out with a flat, basic battlefield, however having terrain and/or other objects on the battlefield will significantly improve the quality of the game, as it ads variation and excitement; for beginners using simple household objects like soda bottles, Legos, boxes, and other household objects will work just fine (though you can find decently priced premade terrain at sites like http://www.jrmini.com/shop/jrmini.php), but experienced wargamers may have terrain prebuilt or purchased that will work just fine. Once you have your terrain set up and are ready to go, it is off to the field for your first game of Relic Knights.

While the instructions that come included with the starter sets are straightforward, I did find myself heading to the internet to get some clearer instruction, though it was not as often as I did on my first few playthroughs of other board games. Included in the battle box is a 30+ page mini book that explains the game, from the basic setup and overall gist of the game to more intricate features like Esper Affinity. Esper is essentially the energy that is the core makeup of everything in the universe and it has certain types of attributes that each of the various forces will have an affinity for. As an example, the Shattered Sword Paladin’s have an affinity towards Law or the Star Nebula Corsairs towards Chaos. 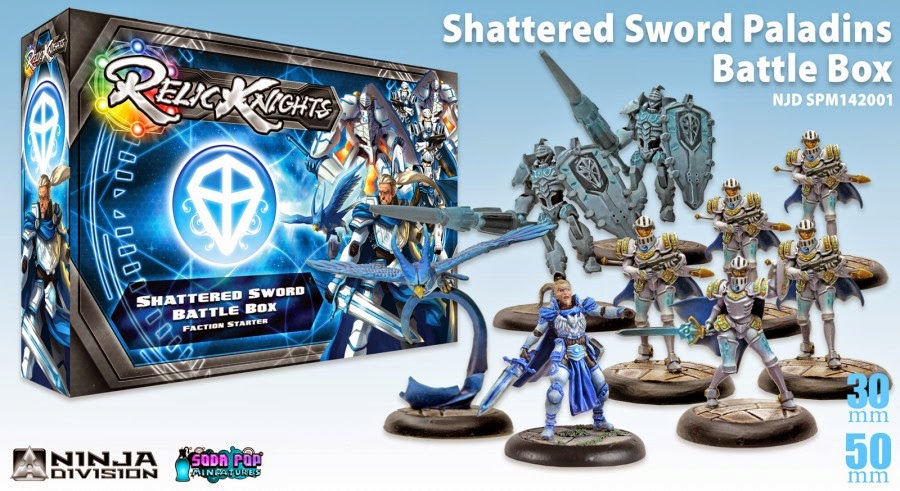 Each particular unit can store up their Esper to unleash at any given time which can be devastating to an opposing force; properly using and releasing the held Espers can mean the difference between victory and defeat. The primary key that I found was to whittle away at the opposing force using general actions and store up the Espers as often as I could to then unleash in a tirade of destruction; while it caused some of the games to last longer than the general 1 hour long game, it also led to some spectacular last-man-standing style of combat. A nice bit that I found with Relic Knights is the ability to mitigate damage by setting units or models into a guard mode, which mitigates the damage, or a redirect mode which will redirect the damage to another unit or model; this can be especially helpful when some of your key units are being hammered on the battlefield, and it oft-times could lead to a healthy victory.

Relic Knights is by no means a beginner’s strategy game as the varying stages of the game can become a bit overwhelming or drawn out (my first game lasted just shy of two hours). The time investment to get it up and running is fairly hefty as well. Painting aside (as it will always be a hefty time investment to paint miniatures), it took nearly three hours to assembly the 14 units that were included in the two battle boxes;. The only other miniature-based game that has taken me longer to build a group of units is Robotech RPG Tactics which not only had instructions, but also 45mm units with upwards of 40 pieces per unit (it took 4.5 hours to build 8 units in Robotech). Once you get past the initial hurdles though, setting up the game and sliding into it is relatively easy, especially if you keep the rulebook and your computer handy.

Once we were able to get a feel for the game, subsequent matches moved along much faster, in one cast ending after about 40 minutes (though, I admit, there was some luck in there). Even with the struggles of assembling the units, Relic Knights is a fantastically fun and challenging strategy game that changes dramatically depending on how you set up your battlefield and choose your units. The replay factor is one of the best that I have seen in a board game / miniature wargame as I was rarely ever deflated or irritated with the game, even after a longer-than-normal play through. While it is not something that can be set up and played quickly, like your traditional game of Pictionary, it is an excellent addition to any miniature wargamers collection.