I had originally thought that with the reboot of the Tomb Raider series it would have been the end of the older version of Lara Croft. This was a character that had been with gamers throughout various console generations and is still very recognizable. I still have not played the Tomb Raider reboot (I do plan on it soon) but It seems like the older Croft is not ready to lay down her pistols as the top down Action Puzzler Lara Croft and the Guardian of Light recently received a new adventure with the follow up title Lara Croft and the Temple of Osiris. 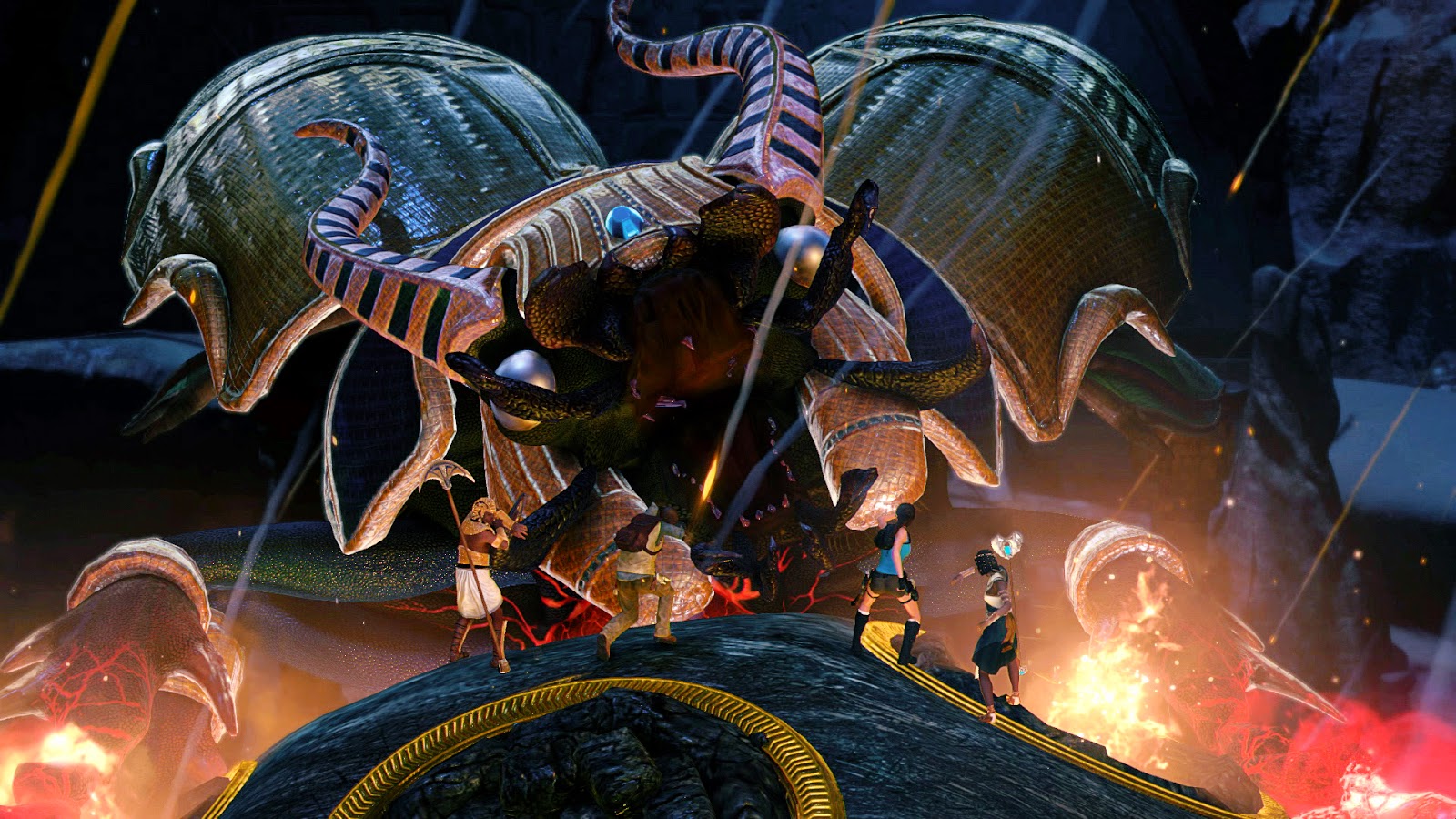 Temple of Osiris was a bit weird to play but that wasn’t because of the game and more because of who was playing. Throw four people with different gaming skills and temperaments into a coop game that requires precision timing and teamwork and sparks can definitely fly. So myself, Breanna (My Player 2 who is now contributing), Richard (My Let’s Play Partner), and Breanna’s best friend set out to conquer the game! Let’s just say that sparks flew and insults were hurled.

Using a third-person isometric view, all four players share the screen without any split screening or divisions as we’ve seen in Lego. While some may have found this to be the most frustrating elements as in the end it was like a Dungeons & Dragons game were the Dungeon Master is essentially herding kittens to get even a moment’s attention, I found myself loving the fact that all four players were utilizing the same screen space. The reason for this is that it promotes teamwork and communication. All four players have to be paying attention to the surroundings as well as their character’s ability set. A simple puzzle actually took us the better part of half an hour until we finally started discussing strategy and HOW we were going to approach the problem instead of all trying it our own ways. 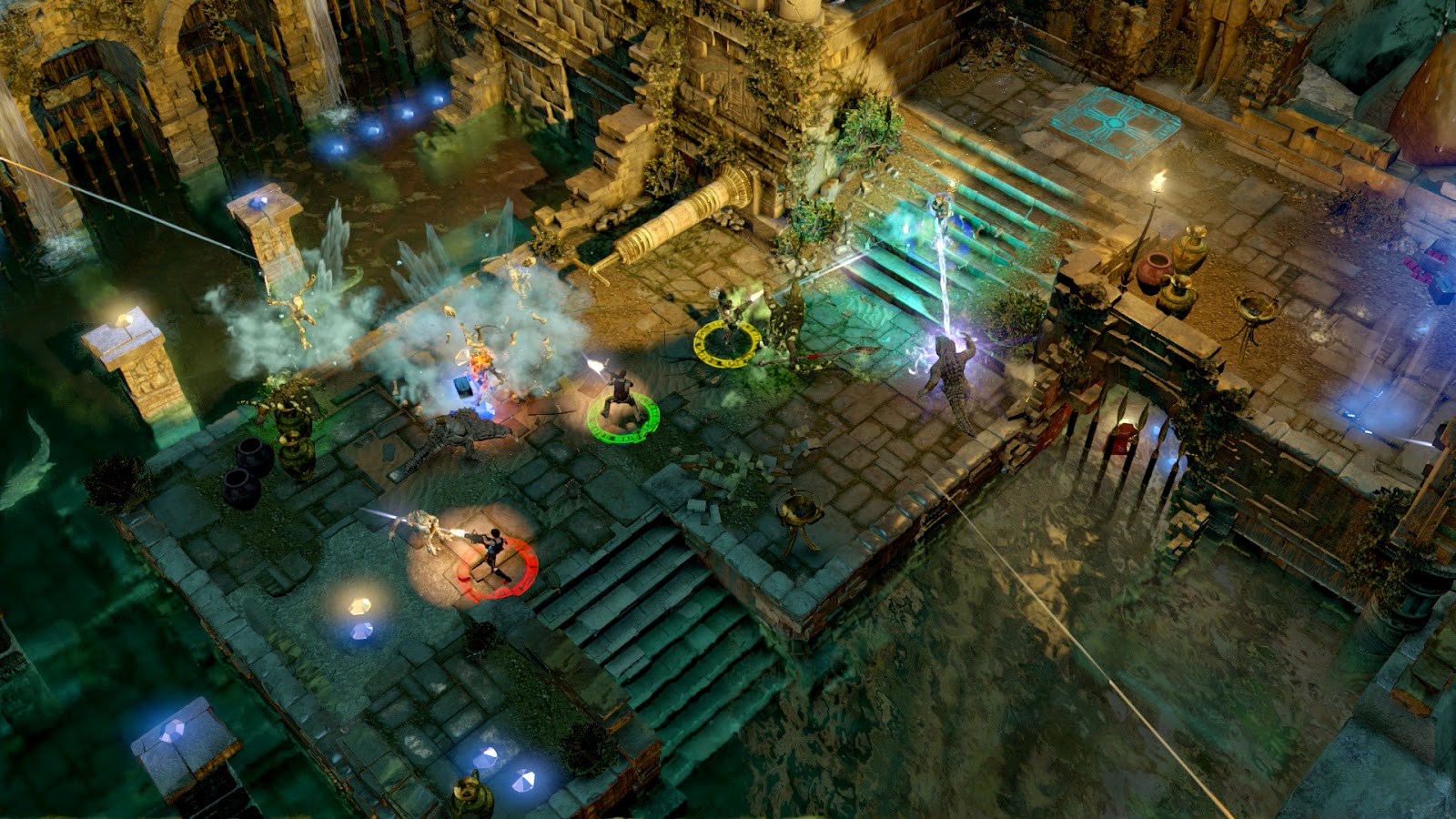 Where the isometric view could become a problem was when the level of zoom in a stage would pull away to show more of the level. While this wouldn’t be a bad thing, there were several instances where we could lose track of ourselves as our characters felt small especially during a particular chase scene. Now I’m saying this after using a 103” screen so I can just imagine a smaller one. While characters do have colored circles around their character, when the floors start to fall out from underneath you as you attempt to dodge traps either by going above or underneath them thankfully your portrait will let you know that it’s time to respawn after you’ve lost yourself in the chaos. The upside is that resurrecting costs players nothing as they can continue on.

Controls are fairly smooth and well designed for a twin stick style when it comes to combat. Where players may find that they have issues is actually not with the controls themselves, but again with the people that they play with and perhaps the character they control. The Temple of Osiris has two different character types. The modern day humans Lara Croft and her rival Carter Bell, and the ancient gods Horus and Isis. The modern day humans have access to modern day tech such as grappling hooks and guns while the ancient gods use magical staves that can create barriers and redirect energies. 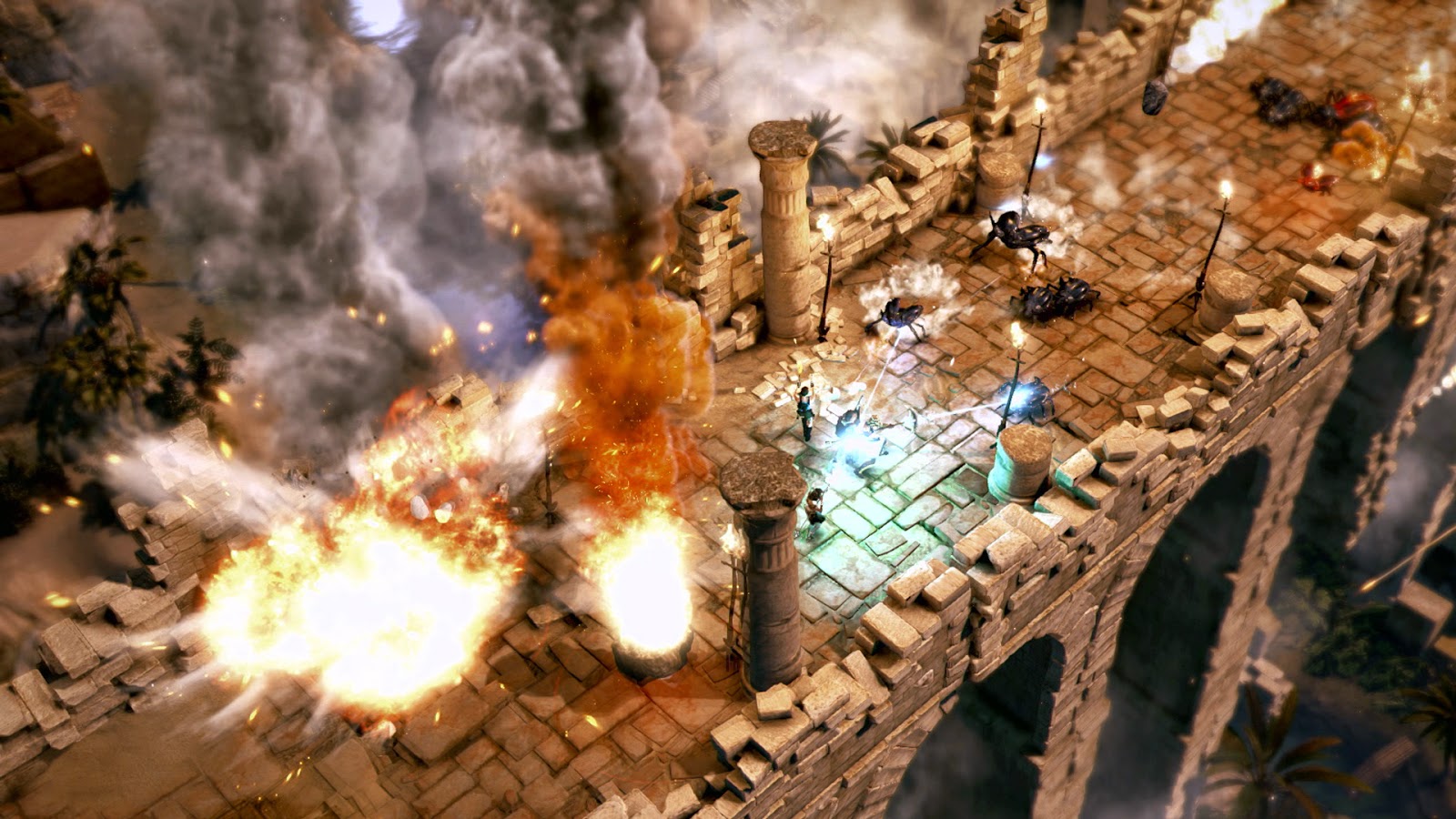 Where the split in the abilities really starts to show is that they are all needed for different forms of cooperation. Grappling hooks can be used to allow other teammates cross over a spike trap while the magical staves can create bubbles for the rest to jump on top of to make the next ledge. Each of these does require timing especially during something like the previously mentioned chase scene. It was nice to see that some puzzles really did require the split abilities as in a few cased it took more than two to tango.

Now while the humans and the gods have different sets of skills and equipment, they do all have one thing in common. Every character has access to more powerful weapons such as shotguns, assault rifles, and more. These weapons all use varying amounts of special ammo which can be replenished with pickups. If a player does run out however then it’s back to the basic weapons until another opportunity presents itself making the use of these a judgment call of the player and those playing with them.

Regardless of the, to my point of view, amusing player interactions Lara Croft and the Temple of Osiris was rather enjoyable as not only a puzzler but also as a twin stick action game. I hope to see more of these in the future as it is games like these that truly put the emphasis on cooperation between players as they aren’t just along for the ride to make things easier.