Pathfinder is not a new property, and the roleplaying game is often compared to older versions of Dungeons & Dragons because of its themes and dice rolling heavy mechanics. That being said, there is plenty of life in this tabletop game and it does enough things distinctively enough to merit time spent with friends trying to overcome the challenges presented. 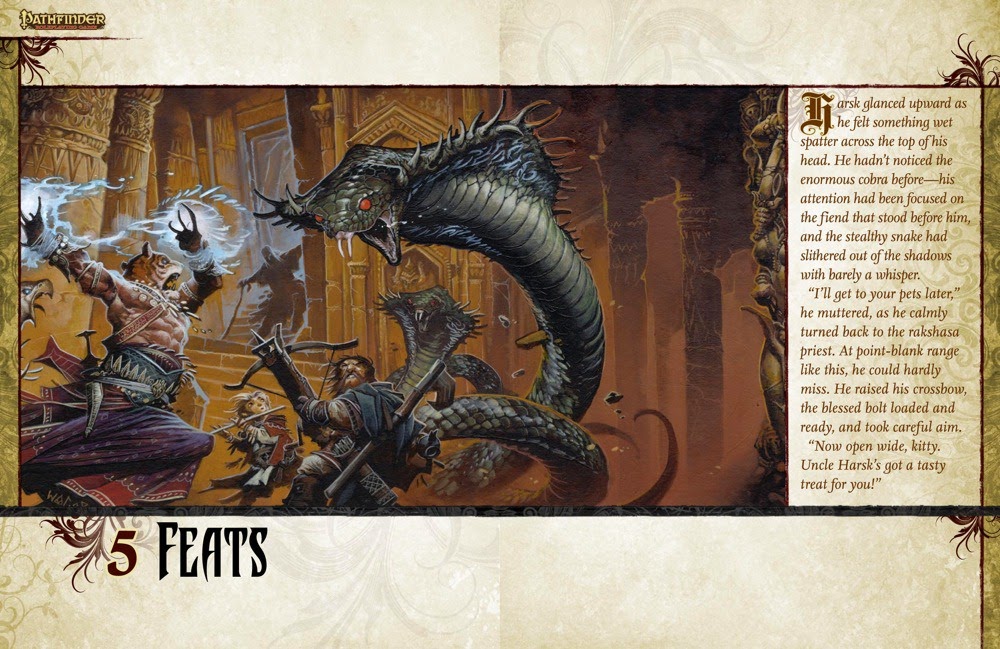 Pathfinder Roleplaying Game Core Rulebook is a massive tome that covers an incredibly amount of territory. It feels a bit like the lovechild of a Dungeons & Dragon’s Master and Player’s guide all in one. The rules feel complete and do not leave you feeling like you are ‘missing’ part of the big picture.

As I noted in my review of the Beginner Box, Pathfinder proves to be a surprisingly quick study. Perhaps I am just really used to tabletop roleplaying games, but I found Pathfinder to be incredibly accessible. I understood that the beginner materials were simplified a bit so that newcomers could access the content more readily, but I did not find the core rules found in this book to be difficult to grasp. Certainly there were plenty of complicated mechanics, but they all played out intuitively and made it quite easy for my group to gather around and play the game, and nearly as easy for me to run it.


While there are not a ton of classes, the ones that are presented here are quite distinctive to one another. Myself and one other player did somewhat question class balance a bit, but in typical RPG fashion a well-rounded group is usually the best served on any adventure. In the class and system development, the easy comparison is to the Dungeons & Dragons 3.5 rule set. I had heavily played editions 2, 3 and now five (completely missing fourth edition along the way). That feeling of familiarity was a mixed bag for me. It was comfortable and made it very easy for me to spin up a session or four, but I was still hoping for a few more surprises along the way. Seeing as the series is a bit older now, it is probably in prime position for an update at some point in the near future, but I was still able to appreciate the current Pathfinder system for what it is – fun, accessible and flexible.

The contents of the book are likely aided by what is excellent writing and flow of content. It is easy to find what you need when using the book as a reference material, but there is a logical order to how information is presented. The end result is key concepts are explored gently early on, but then further elaborated on the further through the book one reads. This sort of foundational building of knowledge helps bring the entire experience together, from character creation to managing feats and skills to using spells or finding treasures. The build quality of the book itself is also something to marvel at. This is a large book. At 576 pages, this hardcover tome has some heft to it. Thankfully the page quality is excellent and it appears to be a very durable book. The art is fun to look at and generally well-done. It is not the best I have seen, and some of it feels like pretty generic fantasy fare, but in other places it looks quite good.

There is a lot to take in when working with a book that is nearly six hundred pages long. Filled with art, tables and paragraphs of text the Pathfinder Roleplaying Game Core Handbook helps explain the rules from both the player and the leader standpoint. The system would actually work well with other D20 style roleplaying games as well, adding to its versatility.