TagsGreater Than Games, Sentinels of the Multiverse, Tabletop and Board Games Review

Recently I had a chance to play the Sentinels of the Multiverse video game on Steam, and if you happened to see my review, you would know that I was a huge fan of the game and its mechanics. Well, that game certainly served a purpose, because it made me absolutely fascinated with what the card game must be like. Having finally had a chance to get my hands on it, I can unequivocally say that while the video game is good, the card game is even better. 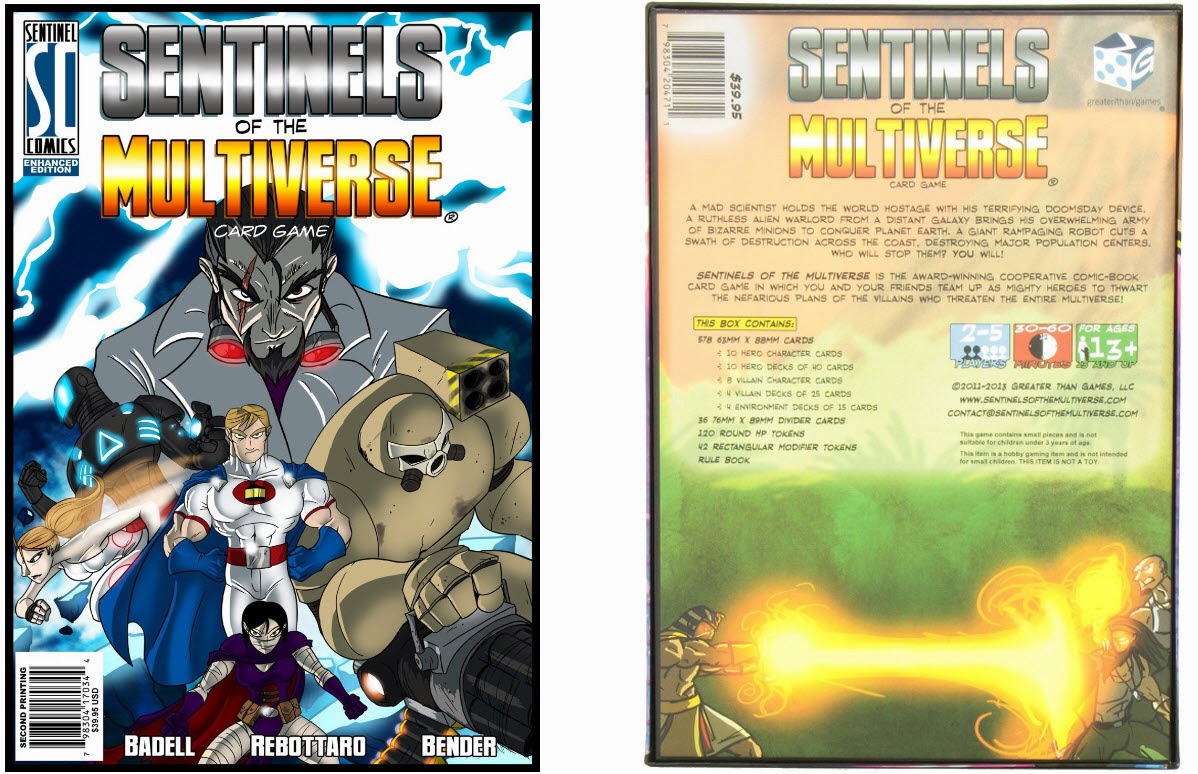 At its core, there is really little to no difference between the two mediums. This is a fixed-deck game (meaning that each villain, environment and hero has a set deck of cards they use, unlike a collectible card game like Magic: The Gathering) where two to five players operate cooperatively against a single villain. Each player selects from a variety of heroes and then one of the different enemies and environments is rolled out.

Each player takes a turn, rolling out pieces of equipment, using super powers and playing their cards as they see fit. The villains are more powerful, with more life and stronger cards with objectives that can end a game. If the match carries on too long and too many of your opponent’s cards winds up in their discard pile, the game might end because the maniacal scheme of slamming the moon into the earth then succeeds. Add to it the environmental deck, which might add bonuses to damage done or introduce monsters into the fray that attack different people (heroes and villains alike) and the potential for variety here is incredible. At the same time, the potential for expansion is equally obvious due to clever design.

The asymmetrical gameplay is perfect, because the villain and the environment simply play themselves. Their powerful decks do greater blasts of damage, damage to multiple heroes and more. The design is also intelligent because it takes things like the number of heroes playing into consideration. Some of the cards play out dealing damage based on the number of participants. Without this sort of variable flexibility, a five person party would feel incredibly overpowered, but in fact they can be just as likely to succeed or fail as a two superhero team. 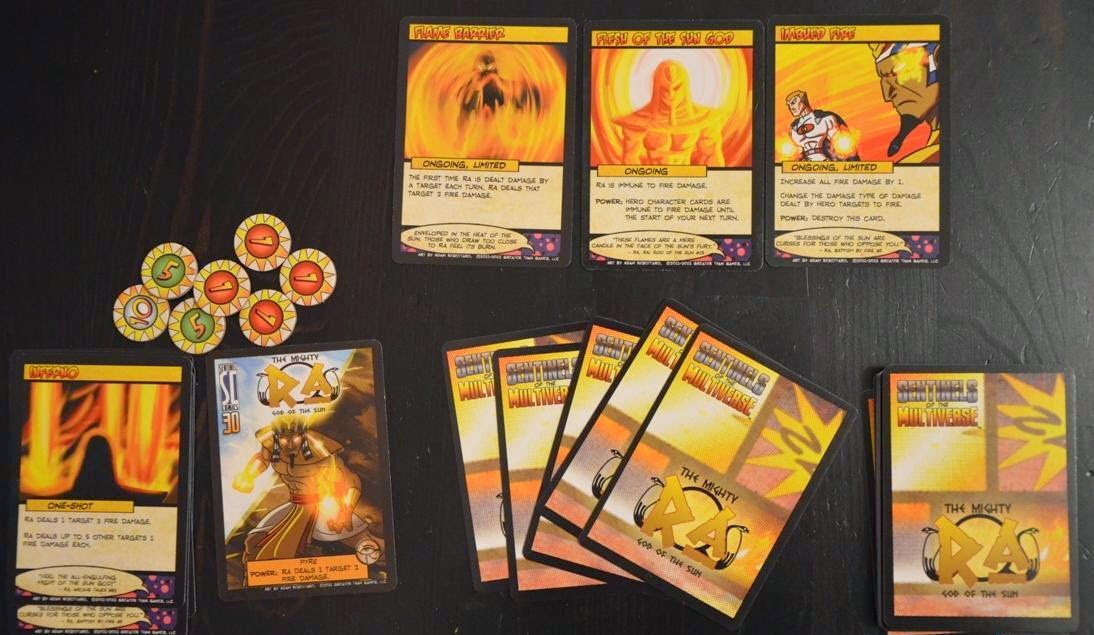 The edition also comes with a variety of handy markers. Some are more useful than others. While they come in increments such as 1, 5, 10, 25 for maximum flexibility, some of the villains are just easier to manage using percentage dice like you might in a game of Dungeons & Dragons – especially when one of the villains starts with 100 hit points. That being said, what is provided is completely flexible and just a matter of preference. There are some handy rectangular cardboard icons as well for things like tracking immunity, or damage absorbing abilities.

There are advantages to the video game version of Sentinels of the Multiverse. For one, you can play it by yourself, so you do not need to have friends together. The other is that the math is handled automatically. While the gameplay of the board game is relatively snappy, there is definitely some math involved during some of the more complicated attack cards and redirect abilities. As someone who played the game on the PC first, I had a bit of a leg up on those playing the board game with me. Because the rules and mechanics are all the same, I felt right at home, but the others who played all picked it up quite easily.

The system is logical, so that is certainly helpful. However the colorful directions are clear and full of examples that make the learning curve a bit gentler. I also appreciated the section that showed how complex a hero or villain can be to play. One of our table opted for a very complicated character right off of the bat, and she did struggle to pick up on things a bit more during the game’s earlier rounds. However, by the time we were finished, she was our primary source of damage dealing and she was having a blast with the character. 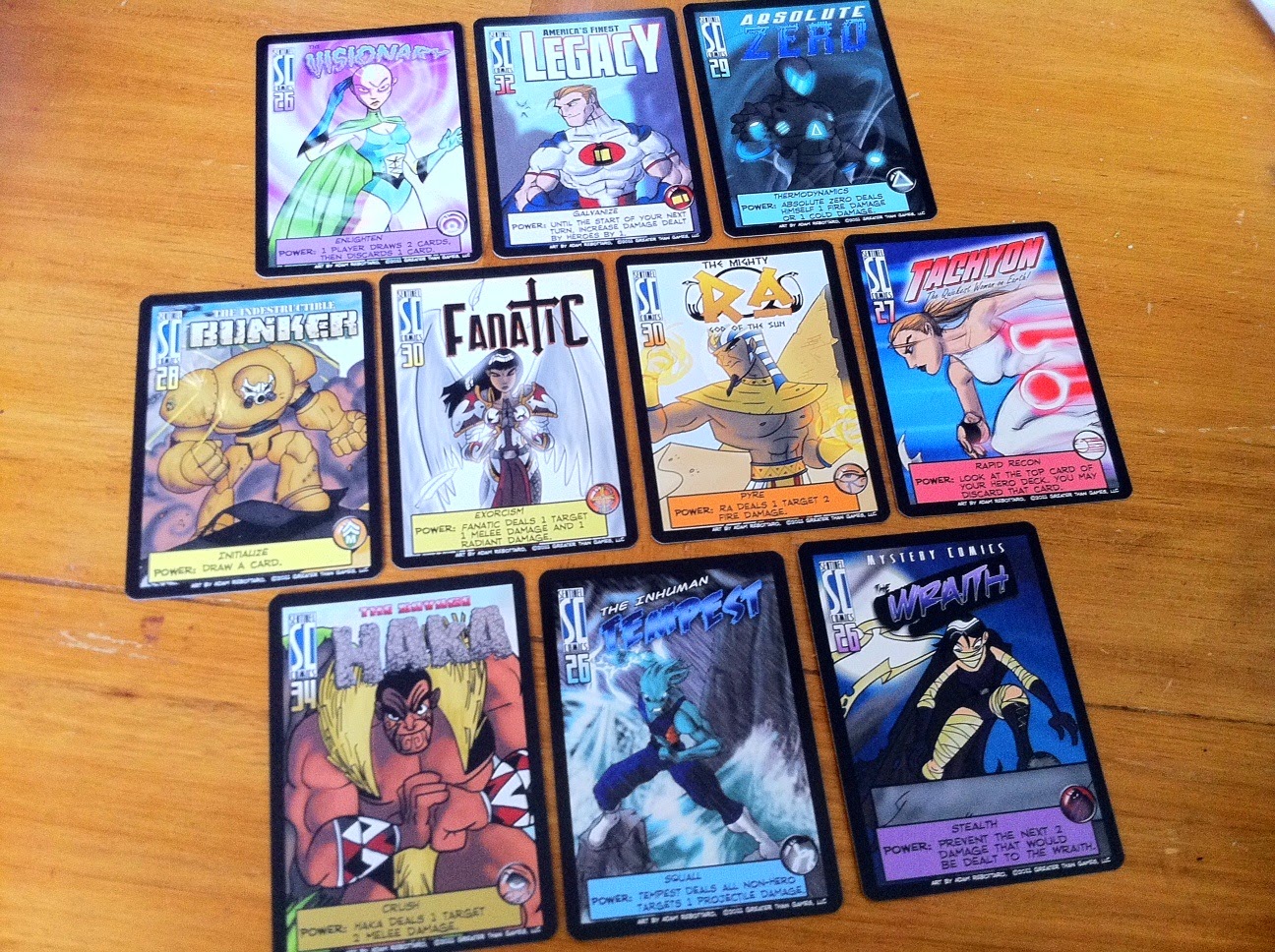 That is not to say that the game is easy by any means. Winning feels difficult, which makes victory all the sweeter when it does occur. It was great that our first game came down to the wire. One of our party was beaten, two of us were on the ropes and one was left with solid health but no cards left in his hands. One more turn, and we probably would have lost the game – two or three tops because one player is generally not going to prove a match for the villains. That being said, on the last player’s turn in that round, we managed to do just enough damage to secure victory and win the game. It was a victory by the narrowest of margins and we immediately set up and played another match – which we eventually lost.

The comic book theme for Sentinels of the Multiverse is spot-on as well. Sure, the characters have parallels to popular figures from other comics we all grew up with, from a girl with lots of Batman-like gadgets to a character who deals ice damage and a physically powerful superhero who falls into a leadership role with ease. That makes them comfortable, familiar and easy to relate to – but there is enough flavor text on the cards themselves, great artwork and entertaining combinations to try out that the heroes found in Sentinels of the Multiverse come to stand on their own feet easily enough.

This is where the board game comes out ahead of the PC one for me. The gameplay with friends makes the victories and defeats far more memorable than the standalone experience does. We were living out and creating our own stories, and they felt right at home with the comic themes found within. The quality of the parts, the well-written directions and intelligent game design mean that expansions make sense and we cannot wait to try them out ourselves and expand on what has easily become one of our favorite board games to date.