Now things start to get very interesting. On Friday I talked a bit about Book 0: Prologue from the Shadows of Esteren series. Think of that book as your starter box in Dungeons & Dragons, Pathfinder or any number of other tabletop RPGs. With a low-fantasy setting, Shadows of Esteren is more effective than most fantasy tabletop games because most of it is very much grounded in a place that feels more real – which makes the supernatural occurrences all the more daunting. Shadows of Esteren Book 1: Universe takes the foundation presented by Prologue and starts to answer more questions – while posing even more challenges along the way. 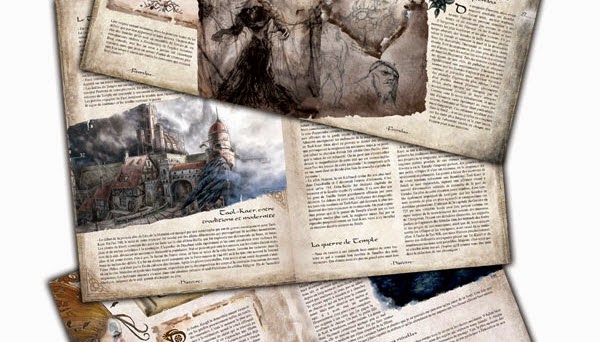 Probably the most interesting aspect to this Universe is how it so eloquently sets everything up. I complimented the original book for being well-written, and Universe does an even better job than its predecessor in immersing the player into this world. Letters, lots of flavor texts and more help to set the stage. The easy comparison is to the old Dungeons & Dragons Ravenloft campaigns, but Shadows of Esteren is far more subtle and reserved.

There are things that go bump in the night (known as Feondas). The key is getting the player characters invested in this world, and then getting them to investigate it as well. The truth is often daunting and difficult to ascertain, but the horror themes found within are absolutely worth the time invested into it. The sanity mechanic is something I have seen in a handful of video games (one of my all-time favorite GameCube games was Eternal Darkness), but not implemented very well in tabletop settings – until now.

Seriously, the amount of thought that went into this is very impressive. The official blog is quite insightful, with a wide range of topics. It is clear that a lot of effort goes into these, and the results certainly show. I already commented on the excellent writing, but the artwork is arguably the best I have ever seen in a tabletop book. Book 1: Universe is a well-made book by any measure, but it outdoes itself with its art.

So what about the game itself? The rules take something of a backseat to the story, which is my personal preference. Character creation is deep and entertaining, and the framework is certainly needed to make sure that the plot progresses while playing, but I never felt like I was restricted by the rules. They were guidelines that helped to ensure things progressed smoothly and made sure everyone had fun. Here the ideas are built around working together to come to a conclusion that makes sense and is hopefully satisfying for everyone involved. This is not a random numbers-driven dice game (in fact the rules generally lean away from those concepts unless absolutely necessary, making the few moments I broke out the dice all that much more impactful).

The characters are what drive the story. This is why I mentioned earlier that the bits of flavor early on are what help to establish this world. They also lend themselves to Shadows of Esteren’s approach to narration – or the unreliable narrator. A good insanity system requires that there be doubt placed in what is real or not, and that a person has to question if what another is telling them happens to be accurate. These different perspectives help to create a world where trust is not a given and sets a stage where most people do not mean harm – but letting one’s guard down at the wrong time might open up the door to those threats that do exist. 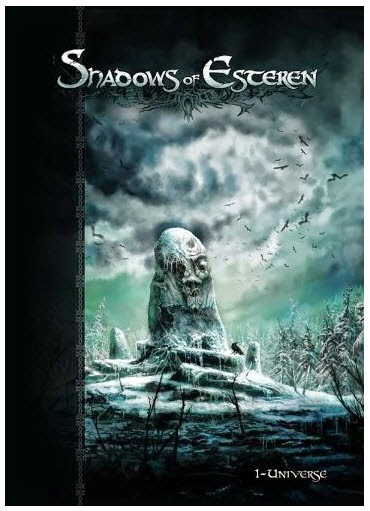 I touched on the character creation system, which is staggeringly deep. This is more about experiences than class restrictions. That being said, the open ended magic system available to the players really provides a level of flexibility not found in a lot of other games. I will admit that as the one running the games, it kept me on my toes somewhat frequently, but it was a lot of fun. However, given the different feel of Shadows of Esteren, there is a bit of a learning curve for those players who have cut their teeth on some of the better known tabletop games like Dungeons & Dragons.

Probably the biggest shortcoming of Book 1: Universe is that it clearly is meant to be part of a collective. Like many other tabletop RPG systems, there are different books that fill different roles and it can be near impossible to run a proper campaign without all of the requisite tomes of knowledge. A slightly smaller concern is that in a world with such limited variety (again, no dragons or elves), the setting can feel just a bit mundane at times. The less fantastical nature means that as the one running the campaign, I had to find other types of details to interject in order to keep players properly hooked now and then.

The overall quality of Shadows of Esteren Book 1: Universe is undeniable. It is beautiful, well-constructed and tries to approach tabletop gaming by doing something new and different. Some of the concepts will be easier to adopt than others, but it is certainly worth investigating for fans of horror and role-playing.