Bloodborne is the gory love child between From Software’ Demon’s & Dark Souls ventures and Sony’s game division. Players find themselves in a world that is falling apart (instead of has, for those familiar with the Souls series) on the eve of the “hunt” and must find a way to survive this nightmare by any means necessary. Not quite understanding what is going on is just par for the course as that is the name of the game. Why are you here? What is going on? Venture forth from the clinic in which you awaken and find out the answers. If you can. 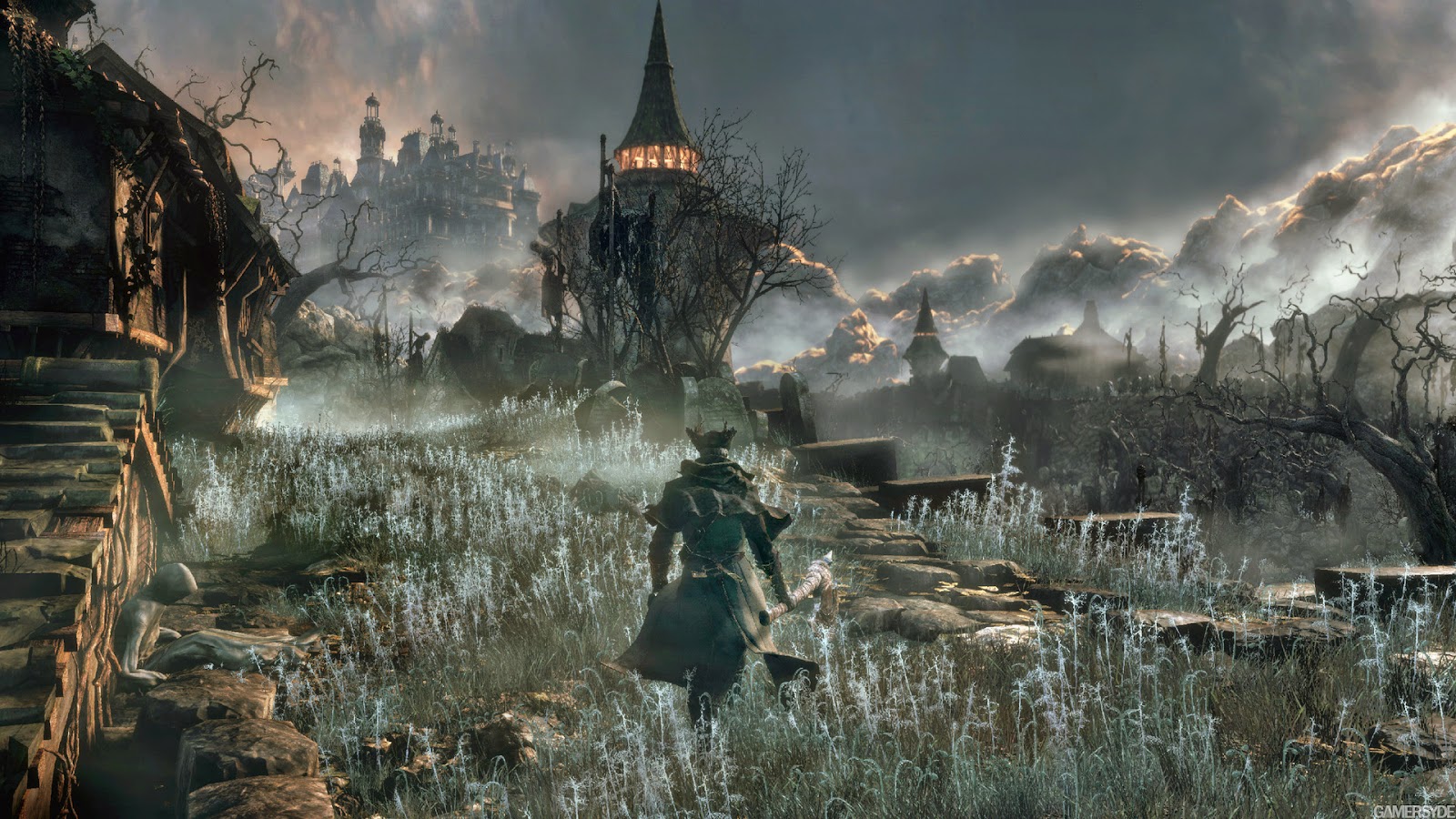 Bloodborne, while looking similar enough to the Souls series is fairly different even from the very beginning. Being developed instead as a much faster paced game, players (like me in particular) are going to have to change up their ways in order to survive which means no longer hiding behind a shield ala Dark Souls II. Instead, players are forced to behave much more fluidly by dodging or timing their shots in order to stun an enemy to buy the time in order to land their own hits.

This combat system alone shows off how much effort was put in as it honestly feels like it changes everything. In a Steampunk/gothic-like setting, players have access to dual mode morphing weapons and guns at their disposal to dispatch incoming foes and monsters. Pistols, blunderbusses, shotguns, and flamethrowers are all available as sidearms in order to stave off attacks if you are quick enough or simply don’t want to dodge out of the way, replacing the shield from previous From Software titles. 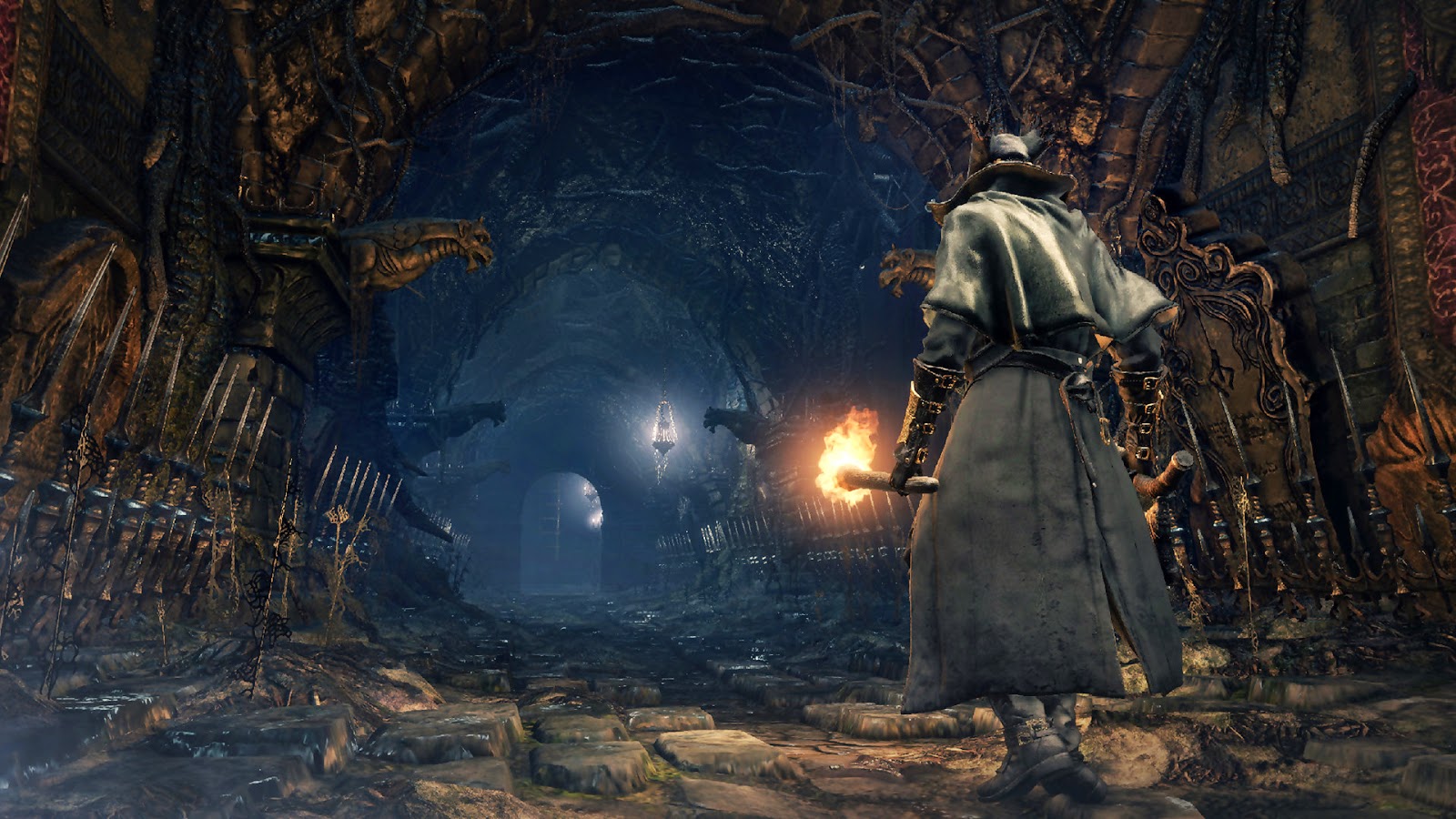 The dual weapon system was honestly in one word: awesome. Having access to both a quick or light option as well as a much heavier alternative at the same moment was sheer brilliance. The switch between the two was smooth going either way and could even be used in a combo form if the right moments presented themselves. Moving from the lighter option to the heavier one for a hopefully well timed strike came with one thing to truly keep in mind. Adding to your weapon or elongating it meant putting away your firearm making it all that much more important to time your dodge as there might not be enough time to morph back take an interrupting shot.

Following on the path of change comes another neat feature; players now have a dedicated button to use healing items instead of having to worry if one was equipped. I will be the first to admit that I have thrown a bomb at an enemy when my intention was to use a healing item. Now players are able to heal as well as throw bombs at the enemy with relative ease. It is the little features like this as much as the larger features such as the weapon systems that show off how much effort went into creating something new from within an already crested style. 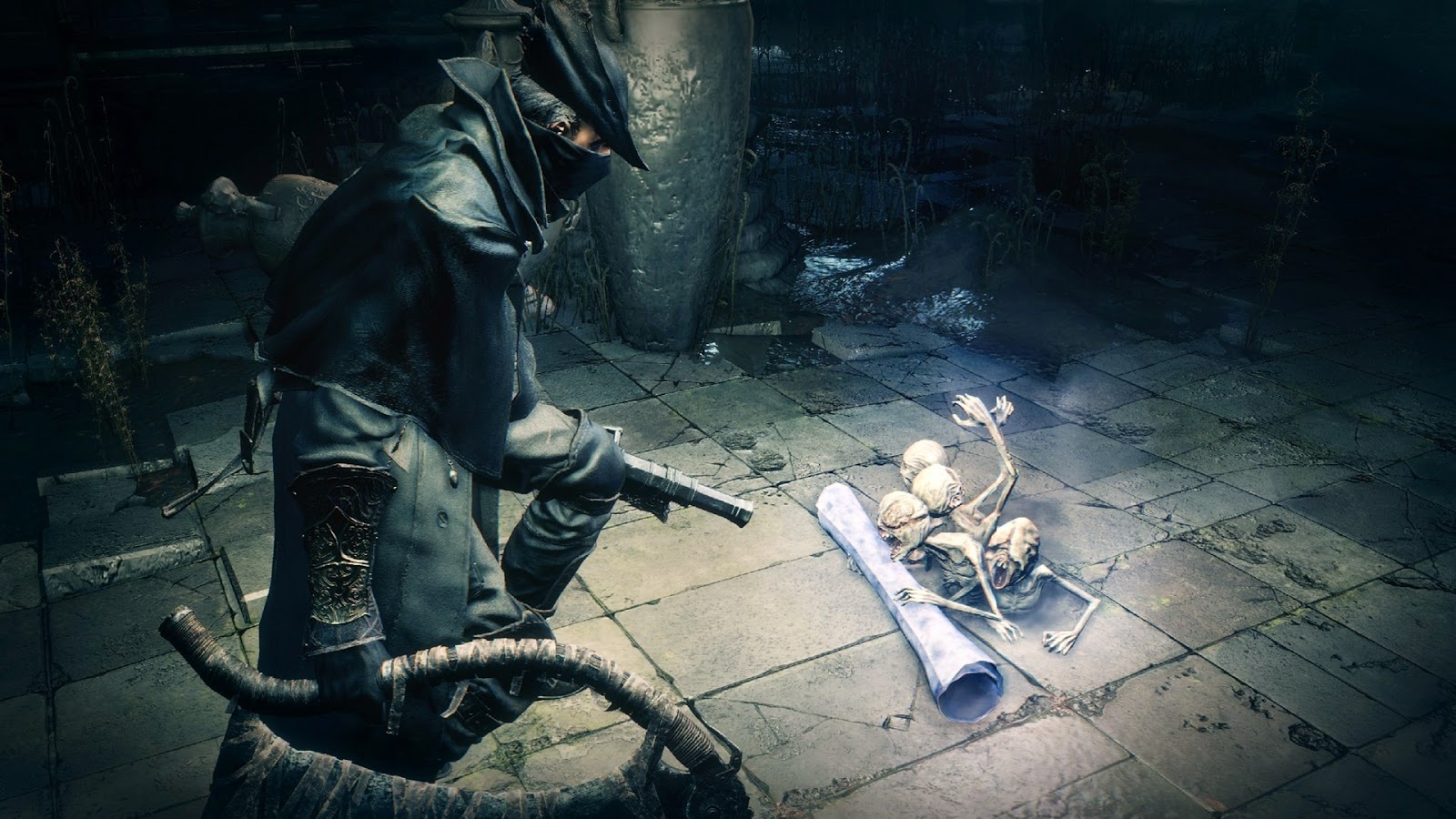 While these new features make for a different experience, they alone are not what make Bloodborne what it is. Demon’s Souls and Dark Souls both found players in worlds that have moved on and were near the actual end of days. Most people were undead at best and listing what remained of not only their sanity but their sense of being before turning into husks. There was an acceptance of this. Broken down or dilapidated buildings just were and the world was fine with it as that is what it was. In Bloodborne something went really wrong and players find themselves right in the middle of “gore hitting the fan.”

Players will find no sense of calm or peace on what is essentially one terrifying night. Regardless of where you walk there is this living sense of malice that only wants to chew you up and split you out, but also wants to throw you off the cliff for good measure with a bolder to follow you down for its own amusement. Bloodborne is a much more violent affair with the pools of splashing blood making me think of some of the most brutal anime that I’ve seen. Players will find themselves caked in it as they explore the streets of Yharnam, searching for the real reason they find themselves to be here on the night of the “hunt.” As the night progresses players will find more and more that things are getting worse, with the folks of the area becoming more and more deformed and bestial as they try to take you out from existence. There is no solace to be found knocking on doors as they will laugh at the idea to open the doors on this night. You should have known better than to be outside. 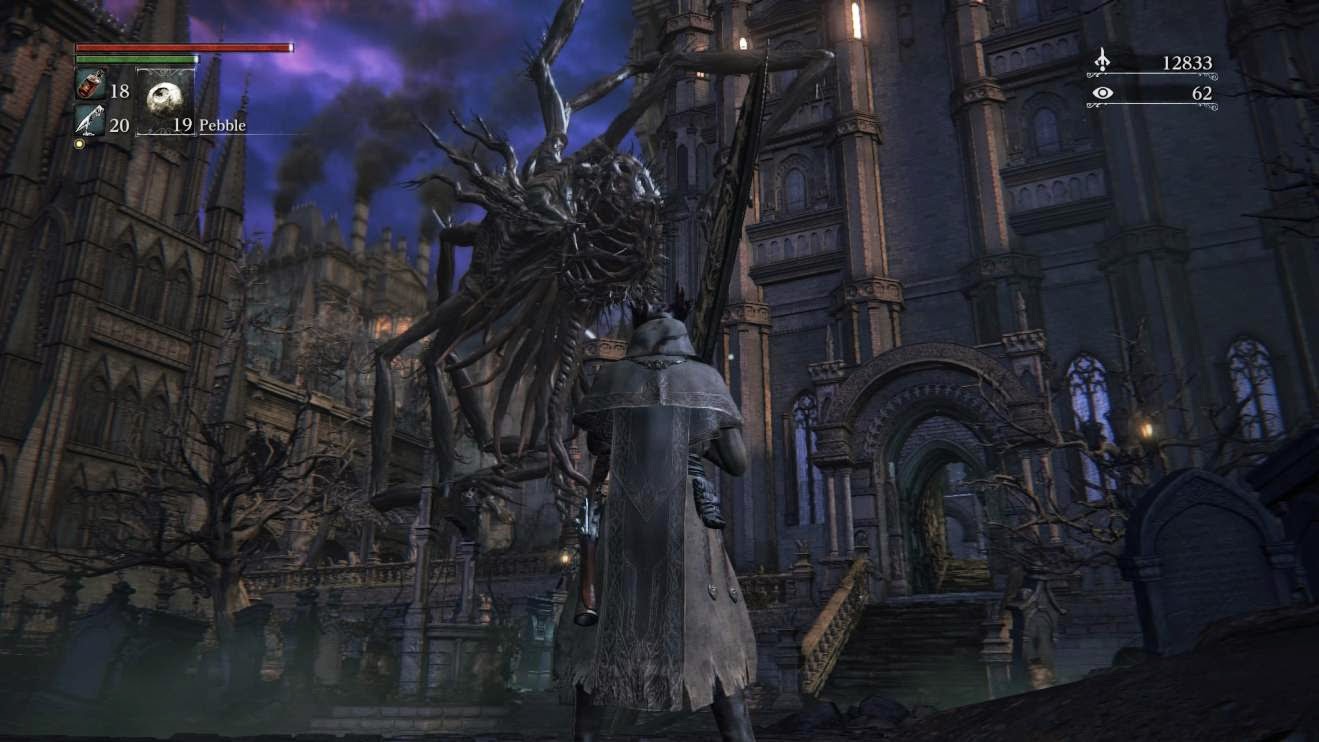 Exploration of the environments is absolutely key to not only your survival, but for more of your own personal sanity to not have to re-traverse those long distances every time you die (which will happen often). Shortcuts are everywhere if you are willing to look for them in a lever here, a switch there, or by just simply pushing on the door from the other side. Each of these will help players move around the city that much easier in order to find the lamps that will lead you back to the Hunter’s Dream where you can prepare yourself for the oncoming challenges.

The Hunter’s Dream works a lot like the Nexus from of Demon’s Souls (or Majula from Dark Souls II), offering players a safe-haven in order to take care of what they need to. Here players are going to be able to use the acquired blood (instead of souls) in order to level up themselves up in a way that best fits their play style. Being used for much more than just leveling, players can purchase items as well as repair and modify any equipment that’s been picked up for use. Using standard smithing requirements players are going to need to pick up various materials as well as blood in order to upgrade their weapons to become more powerful and efficient as the night moves on.

Bloodborne not only shows how far From Software has actually come since the early days of Armored Core and their original venture into this style with Demon’s Souls, but also shows how much further they can actually continue to with other crazy ideas in both story and gameplay mechanics. Overall it has been an incredible (and psychotic) adventure in which heading back to a Souls game is going to be rather hard with a new tweaks the players can get used to.

By Pierre-Yves
Follow:
Manager and Senior Site Administrator—Currently a reviewer for Chalgyr's Game Room covering all platforms
Previous Article Bandai Namco announces some new titles, offers assets to others too
Next Article Son of Nor – PC Review