Bloodsports.TV caught me off guard. I had gone in armed with three others seasoned players expecting to personally be demolished by another team. This is honestly my general sentiment based solely on how good (or bad) “I” am at MOBAs (Multiplayer Online Battle Arena). Checking out the classes and the characters and discussing who would be taking care of which role, the four of us checked into the game only to find out there was no other team. Confused? Slightly. Relieved? That too. 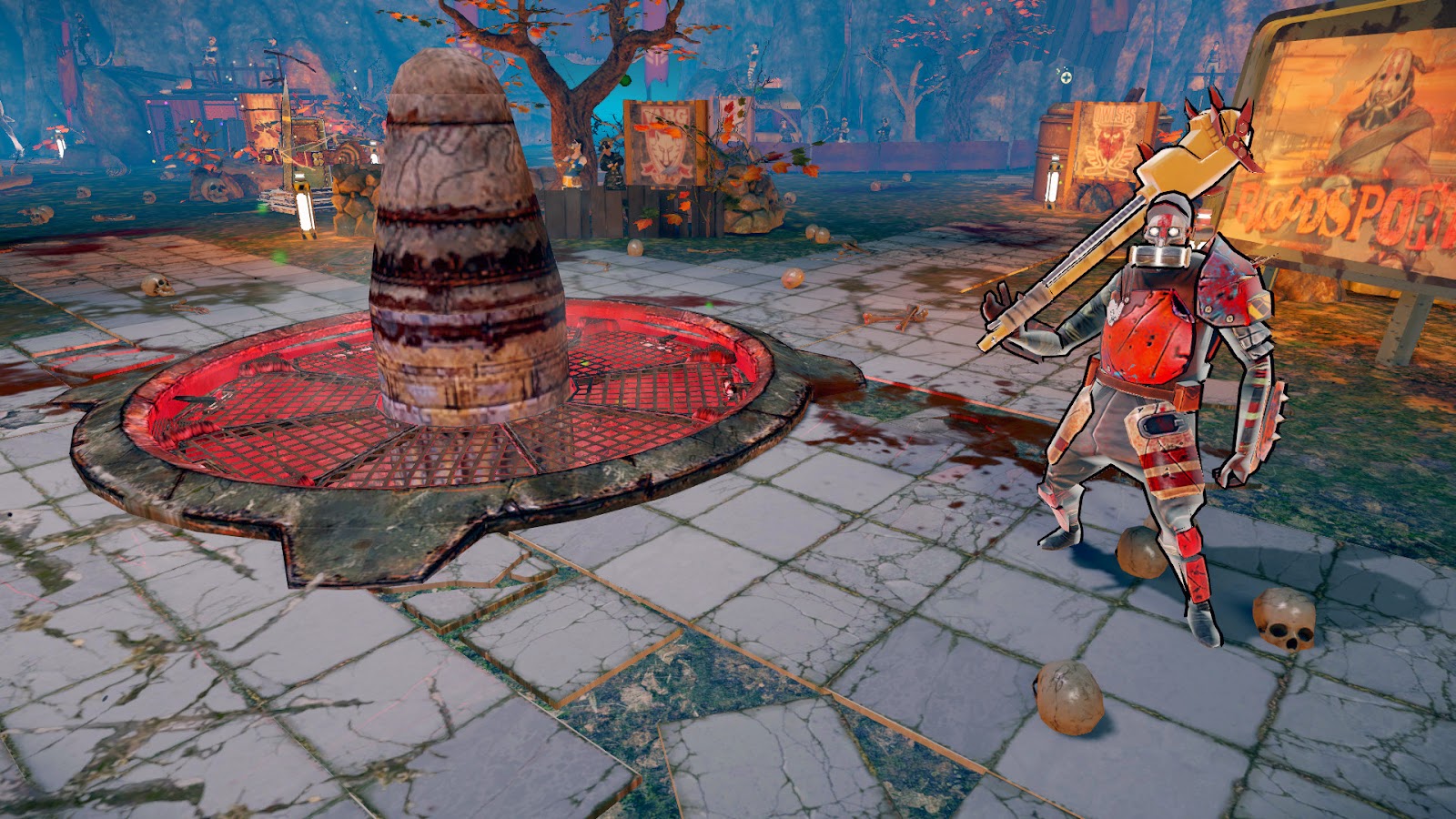 Bloodsports.TV is a Tower Defense with an RPG MMO like progression system utilizing the MOBA format of gameplay. That’s a handful to say but while it sounds interesting on paper, it was even better in practice.

Starting off players, will find themselves as gladiators at the bottom of the ranks with only a few choices available to them. Divided into the four categories, players have the option to pick up a damage dealing bruiser, a tank like meat shield, a ranged support, or a healer to beat back the waves of outlaws who are attempting to destroy the nuke aimed at their homes. Yes. You read that right. You are not the good guy. Not even close. How do you sleep at night?

Each class comes with two skins by default with two more that can be unlocked as you make progression through respective challenge trees. While this may not seem like much, each skin does more than just change the appearance. Acting as wholly different characters with different skills, this approach allowed for similar-looking characters with different modes of play. It was interesting to see how one character could play so differently than another within a respective class, as they are designed to do the same “job”. A good example of this is that one of the tanks (damage sponge) was designed to sit there and laugh in the face of the enemies that he taunted, while another version would instead taunt as he ran by. This would then force the enemies to give chase, essentially turning into a distraction instead of a meat shield. 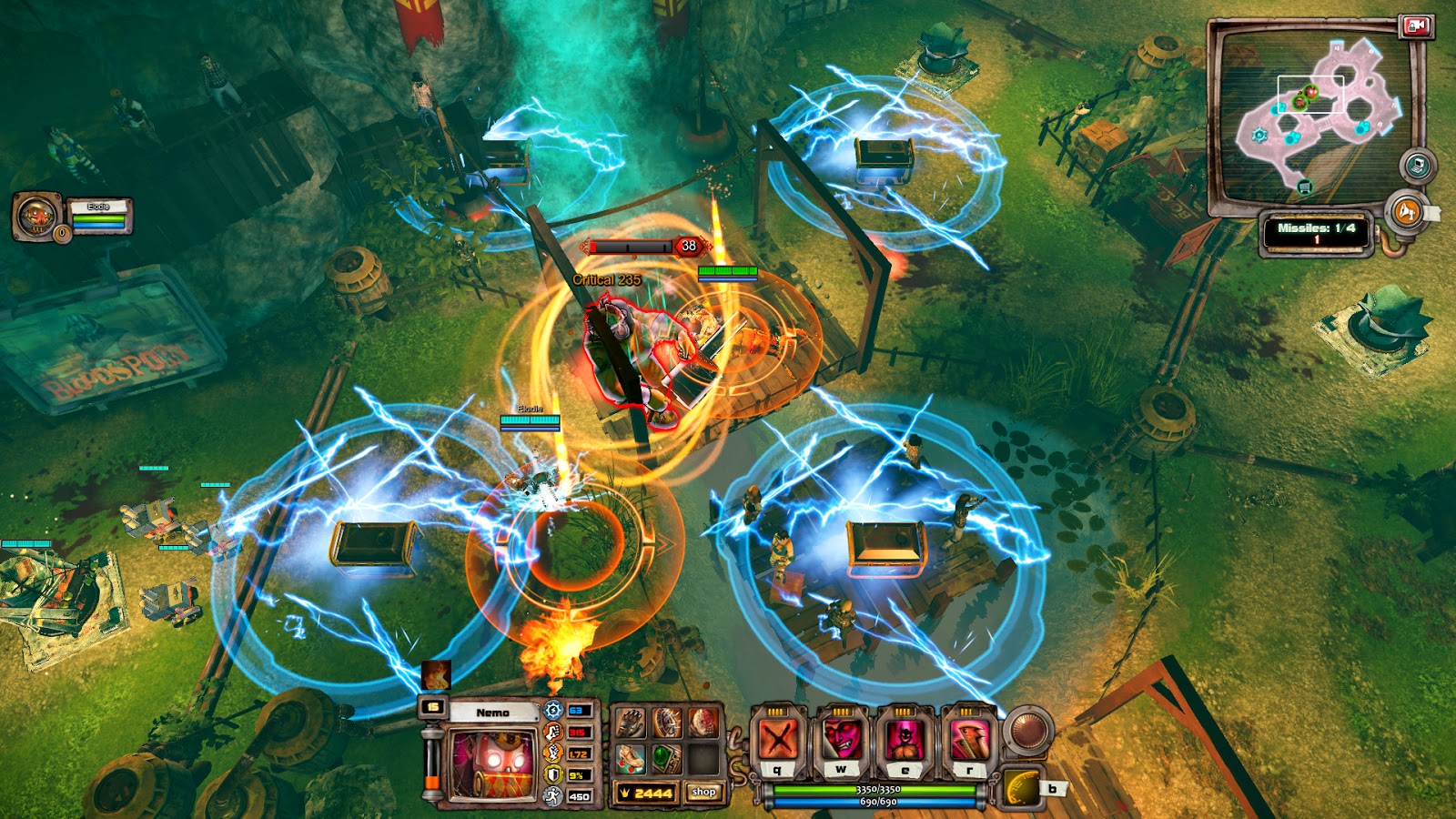 For something “a little” different comes the above mentioned challenge tree. Each class type has a set of objectives that must be met in order to move further up and unlock passive abilities as well as different skins once you reach a high enough tier. These challenges range from receiving a certain amount of damage to reviving other characters a specific number of times. As these challenges are completed, the classes that are unlocking their own portions of the tree receive a passive boost making which in turn also makes them that much more effective from that point forward. Aiming to make players utilize all the classes is the Grandmaster challenge that requires all class trees to be completed. Let’s just say that this grants one hell of a bonus forevermore to each and every class.

Games play out like a perfect marriage between a Tower Defense (which I absolutely love to play) with waves of enemies and the MOBA top down gameplay with equipment purchasing and skill upgrades upon leveling up. While the core of Bloodsports.TV remains the same throughout: protect the nuke so that it can launch – our gladiators have several different maps and difficulty ladders available to them. Each map plays out differently to the point that it changes the required tactics to be successful.

There were a few times in which we had to split up to cover all of our bases to not lose our towers.. In others we had to rely solely on the invading outlaws for income as there were no extra respawning enemies after a wave was complete, limiting our cash influx. That was hard as we all found we were an item or so short of what we generally aim for and forcing improvements to come later than usual and making some of the later challenges even more difficult. 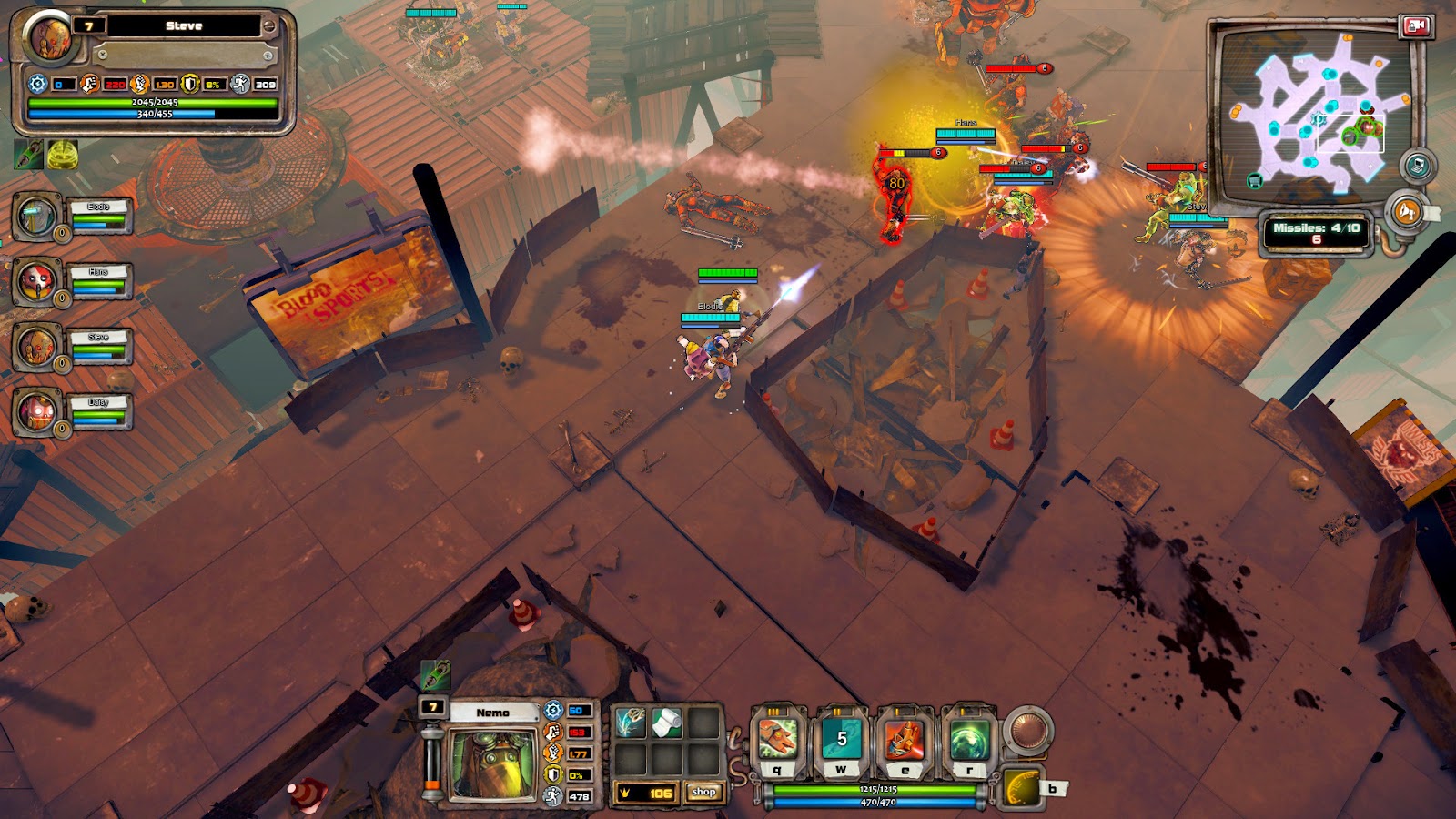 One thing to note is that Bloodsports.TV does not use dedicated servers. It instead uses one of the players as the host, which is generally not a bad thing. However, once a modem decides that it’s done for the evening, we had a game literally come crashing to a halt. After rebooting his modem and router he came back, but there was no chance to reconnect to the game to finish it and obtain progress for what we had done. Needless to say, make sure that the host has a solid connection!

I went into Bloodsports.TV expecting to have a hard time attempting to get a grasp of everything since MOBAs are really not my thing. This is why I recruited three much more seasoned players to help me out! Instead, I found a very accessible game that is indeed MOBA-like, but with a Tower Defense system that had us playing for several hours nonstop.

On the whole Bloodsports.TV was an awesome game. Not only did I appreciate the tutorials that allowed me a grasp at the game’s core mechanics, but the system itself ran smooth and was easy to use. Players can either jump into a random game or rope in a few friends to join them. It really does not matter which route you go, because regardless you’ll be in for a good time.