Tentacle Bento (in case the name did not give it away) is not really meant for kids, but it does take the basics of a well-known card game and adds some variation to the mix to create a lightweight game that can prove to be a good deal of fun.

The well-known game that Tentacle Bento reminds me of? Rummy. Tentacle Bento gets credit for being quite easy to pick up and play, though it loses some marks for moments that are perhaps not as clear as I would have liked. The gameplay mechanics are simple enough, with each player being dealt a hand and then turning a card over from the deck in the middle of the table.

Each turn starts with drawing cards. You can draw the top card of the discard pile, the top unseen card from the face down deck, or you can draw any number of cards from the discard pile – taking everything above the card you ideally wanted (that card must be used in a ‘noble capture’ however – more on that below). Any of these three draw types allows you to still try to play your cards and make captures. The fourth draw option lets you take a few off of the top of the face down deck, but then your turn is immediately over. 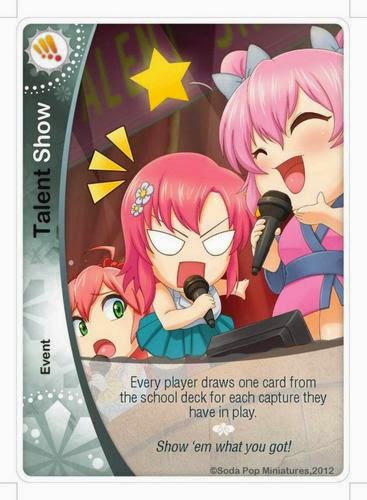 There are two basic categories for cards. The first is the suit. You have intelligent, sporty, sexy and cute girls making up the four suits. On top of that, we have environment cards, girl cards and trap cards (not of the Yu-Gi-Oh! variety). The object of the game is to capture girls. Girls are worth points at the end of the contest. There are a couple of ways to go about capturing these young girls.

The first is what the directions refer to as a sloppy capture. Suit is not a factor, you simply need one girl, capture and environment card. You then put them down in front of yourself and you have one point from that set at the end of the game. However, it is a far better strategy to hold out and try to get a noble capture. This means all of the involved cards are of the same suit. This has several added benefits as well.

A noble capture lets you detain up to three girls, instead of just one. That means the stack is worth three points at the end of the game. It is also the only way to capture star girls. These girls have additional effects to them, and while you can only capture one star girl with a noble capture, she is worth five points instead of one. Additionally, each time a noble capture is triggered, it has an effect on the game such as changing the direction that turns go in or having players swap cards from their hands.

There are some additional special cards that break these established rules. Some of these cards can be a bit maddening, because they go back into the deck, so you might see them over and over again. Chris used one on me several times that kept removing my established sets from play. There are also four major event cards. Each event does something dramatic to the gameplay (such as discarding your entire hand and drawing a new one). Once the fourth event card is drawn, the game is over and you tally up the captured girls. You also take a penalty for any remaining girl cards in your hand – much like the endgame scoring in Rummy works. 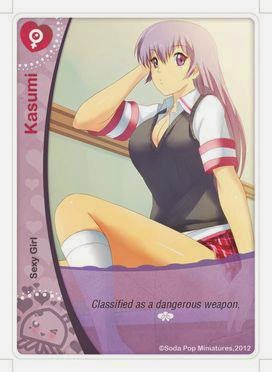 The cards themselves are made up of nice enough stock, though the simple box could have been handled better. You basically just cram in the cards from one side into two stacks. It might have worked better if the box was built with a divider within and encouraged you to enter the cards then from each side to split them up. Artwork is quite good, though it could have used more variety. It might have been nice to see multiple cards of the same girl sporting different art, instead of recycling the same image each time. As for the artwork, it is suggestive but never completely over-the-top. There are a few cards that have a girl groping a girl, but most if it is made up of large eyes, long legs and short skirts.

Very easy to learn, it can still take about half an hour to an hour to get through a match. There are some slight balance issues as well. Like Rummy, the scoring itself is relatively balanced, but the additional cards can make for some pretty lopsided victories. Our first three games, the winner usually had two to three times the score of the other two players. For example, pulling off the smart girl noble capture means that the order of play is reversed. Chris and I did this several times, leaving our third player just watching for five straight turns, unable to get her own turn in. 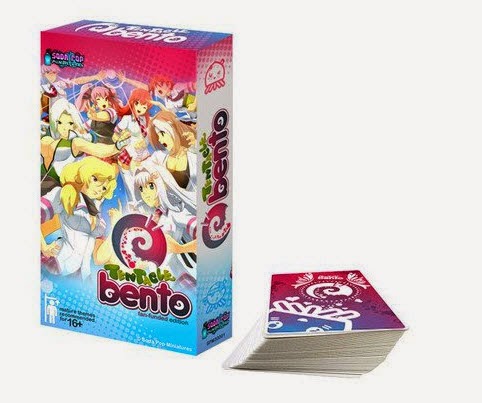 Tentacle Bento relies heavily on its theme as a selling point, and while that my dissuade some people from playing it, the game will undoubtedly have its own niche following as well. The rules are immediately familiar since they are so similar to Rummy, though there are some variations in there that do help to make Tentacle Bento its own game. That game is brisk and fun to play, even if there are some balance issues that can arise.