A few years back a large amount of gamers never would have thought that “retro” gaming was “cool”. Actually this topic comes up often enough between just Breanna alone whenever I pick one up even for just my own amusement. Part of it comes from the lack of having grown up with that generation of gaming and not having the nostalgia factor, while another part comes from those who need the level of graphics that the AAA titles provide. 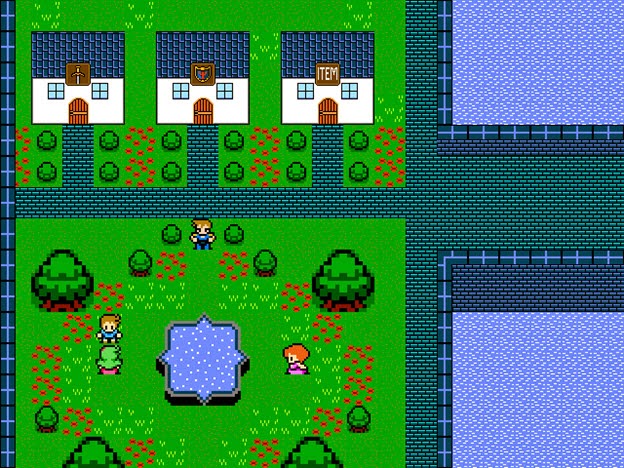 Retro titles today are generally 8 to 16-bit “ish” as they have much smoother graphics than what we actually had, forgive me for dating myself, back in the day. Enter 8-Bit Adventures which is the closest to an actual 8-bit retro that I have seen in a long time which truly brought me back to the days of the original Nintendo Entertainment System.

8-Bit Adventures honestly has to be one the most interesting forms of old school RPGs that I’ve seen in a long time. Waking up late one morning “Blue”, a warrior and town guard captain, wakes up late and heads from the Inn to meet up with an old friend in the city’s streets. Something is about to happen and it doesn’t look good with a huge portion of the army awaiting for something. Meeting up with “Green”, a thief who is rather good at what she does, they two move through the side streets to talk to “Red”, a renowned Wizard preparing to cast a spell to essentially eliminate some great evil about to rain down on this location. Blue, Green, and Red, are all able to be named as players see fit, but for the sake of making a later feature easy, RGB it is. Having the spell not work out as intended and disaster strike, Blue wakes up from a bad dream and the story starts off for real.

Once our three characters meet up for the first time, the true clinch of the system clicks into place. Using the Rock / Paper / Scissors method, every enemy will be strong, weak, and generally neutral against the other colors. Thankfully our three heroes have all the bases covered. Seeing as we have a warrior, a thief, and a wizard, every character also receives color coded skills for their opposing colors in order to be more effective. It can take a few battles to really get the hang of remembering which colors trumps which as prior to the meet up, each character faces off against their own colors. 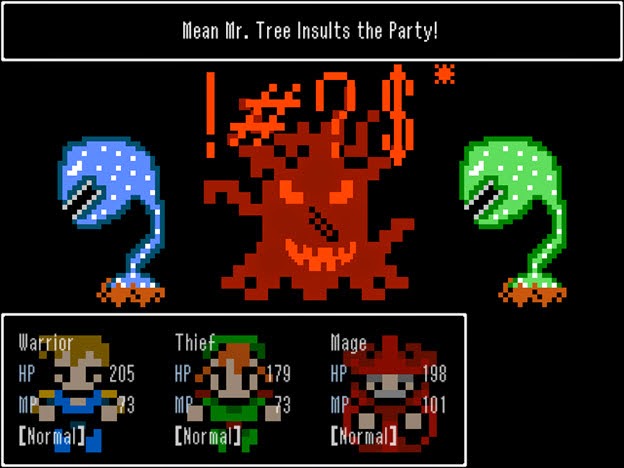 Using a black background, this is the second time in the very short while in which I’ve seen negative space being used to design various elements of a game. Using full and varied colored designs for the overworld, the battle screen uses a black old school screen with a few white outlines for your characters and the battle dialog. There are a lot of different enemy models that use color where it is needed and has the background fill in the blanks. Not only are the design choices well done, but the naming of a good chunk of them had be either chuckling or laughing outright.

I was more than pleasantly surprised at the amount of dialog that could be found. Typically retro games make everything quick and to the point as was the style considering that cartridges were quite limited space wise. 8-Bit Adventures follows more along the later generations of RPGs in regards to its story telling as they are not afraid to have meaningful conversations between the main characters or even some of the townspeople.

This is what really struck me. The dialog whether from the main characters or just a random NPC sounded unique. An issue that a lot of games from the Indie all the way up to the AAA can have is that NPCs are generally just cookie cutter text and intonations are not really used. This is a bit of a generalization, but it does happen in a lot of cases which is sad as it can make an otherwise great experience fall flat. It was clear that a lot of work was done and in a lot of cases I found myself searching out the NPCs just to see what they would say and in a lot of cases I was not disappointed.

A very interesting design choice was the manner in which exploration is handled. Instead of walking through the towns and trying out every single door in order to see which ones actually open, our group of adventures simply need to look at the door to be told if they can enter or not. A square door prevents entry while an arched door is open and allows for players to walk right on in. This can speed things up for all the loot completionists that search every nook and cranny. Better yet though, any bed with unmade sheets is one that our party can sleep in no questions asked… now that I think about it though…. unmade sheets? Either way HP and MP is made full again so there’s nothing wrong with that!

Finally there is saving. Players can do so wherever they please and have multiple save files to do it in. This is extremely convenient as it allows for the game to be picked up and put down quickly if the need arises. While this is nothing new, the reason that it is important is that actual save points do exist. These save points act like those in the later RPG days in which when one of these appeared, you knew the boss was right through that next door. Using this concept, our Mr Save Point reminds players to save before they potentially get wiped out by the boss.

Between the interesting design choices for enemies in combat and the well written dialog for more than just the main cast, 8-Bit Adventures hits it out of the park not only for being retro and 8-bit, but also for being a damned good RPG.