Whenever you have a video game based on some other property, you have to wonder how it will hold up. Is it a quick cash-in on a familiar name or face? The number of crummy super hero games out there is too much to count. Thankfully Angry Video Game Nerd Adventures would manage to be a an enjoyable action platforming title that calls back to the 8-bit days even without the familiar AVGN references – but the game is all the better for having them if you are a fan of the Nerd. 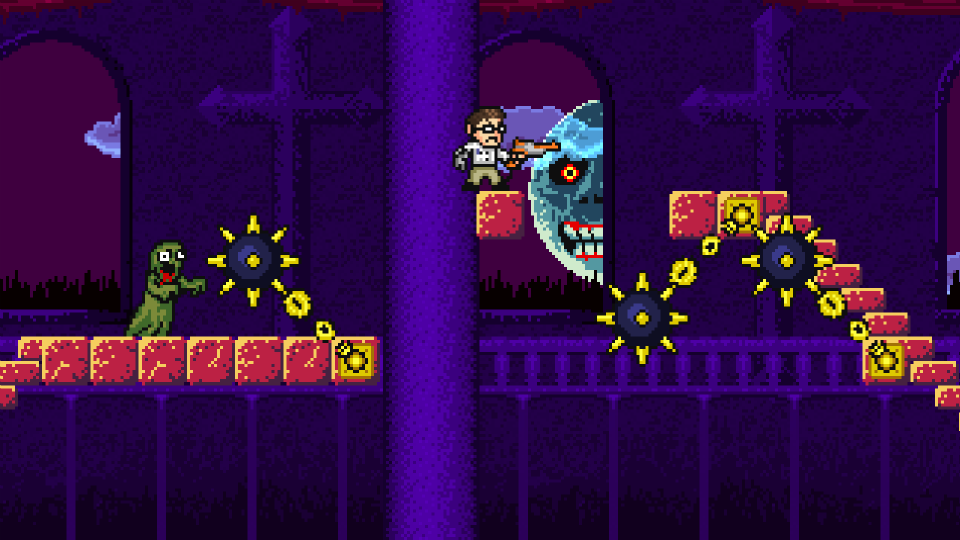 I have been watching the Angry Video Game Nerd since just about the beginning, finding myself amused at James Rolfe’s scripted and usually agitated antics on YouTube over the years. I still visit his site at Cinemassacre quite frequently in fact.
Sometimes I am checking out James & Mike Mondays, other times I am
watching Board James and sure – some of the more random videos like Top
15 Awesome Transformers Moments. All of that being said, I go back for the roughly once a month AVGN videos because they simply make me laugh. 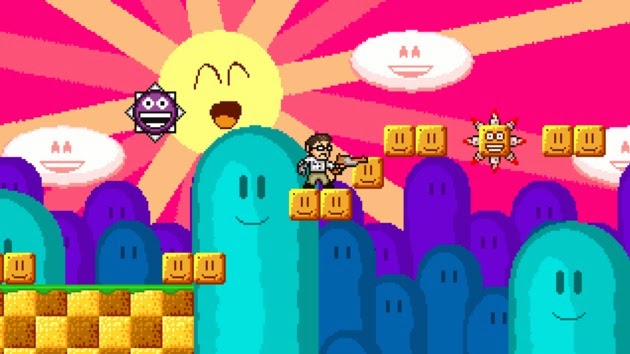 The game itself plays like a classic NES title, with tight controls wrapped around a jumping and shooting mechanic that reminds me of Mega Man. I do find it amusing that this is my third title in recent weeks that is a throwback to classic NES games (Shovel Knight and Axiom Verge being the other two), yet I am absolutely eating these games up. They are just as hard as I remember, and I am not someone who thrives on overly difficult games as a rule anymore (insert jokes about me getting old – my kids certainly do). All the same, if you have the patience for timing-critical jumps, challenging pattern-oriented bosses and plenty of instant death traps – you will likely find a good deal to like here.

It helps however, that despite the references to the AVGN (and they are plentiful from tropes, review references, friends of the Nerd and even Super Mecha Death Christ), Angry Video Game Nerd Adventures would hold up on its own merits. There are moments of frustrating to be certain and just like those classic games, most of the time death feels deserved but there are some pretty cheap and frustrating deaths sprinkled in as well. The switches in particular tried my patience. Even then however, the frequent checkpoints and three levels of difficulty do a good job of allowing gamers of different skill to play and advance. It is challenging gameplay, but rewarding when you do beat a level and eventually, the game. 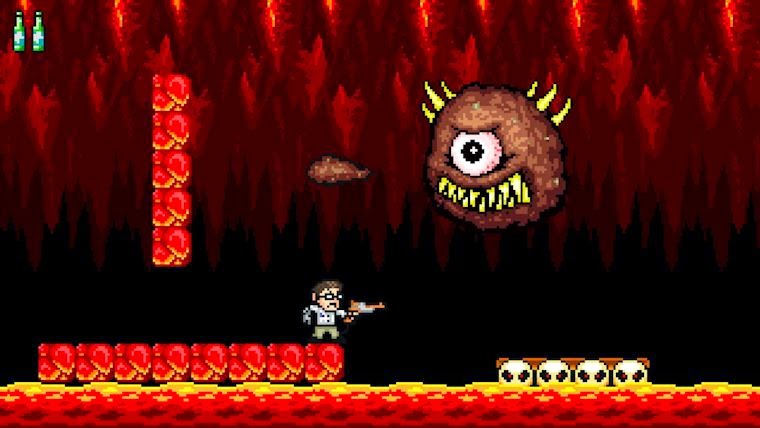 Angry Video Game Nerd Adventures is apologetically challenging, but that makes sense since many of the tougher games of the NES past such as Silver Surfer are frequent targets of the Nerd. It was amusing for me to play through the levels and hear his quips, most of which find the mark (though a few do fall flat here and there). Given the raunchy nature of the language used, I would say that despite the colorful graphics, this is not one for little kids to be playing. Just keep that in mind.

Is Angry Video Game Nerd Adventures platforming perfected? No, but it is a solid experience with reasonable difficulty spikes, clever level design and some cool unlockables. However, I feel it is safe to say that those who will get the most mileage out of Angry Video Game Nerd Adventures are those of us who are fans of the Nerd himself. The mechanics never quite hit the perfect stride of other retro games I have played recently like Shovel Knight, but for me personally? The presentation helps to make it an enjoyable (albeit sometimes frustrating) experience all the same.