comments Share
You are reading
Ar nosurge Plus: Ode to an Unborn Star coming soon

We were fans of Ar nosurge when it first released on the PS3, so the news that an updated version will be making its way to the Vita in the near future is welcome indeed. 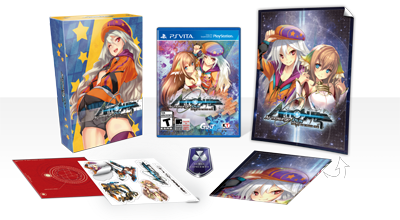 
NIS America is excited to announce that we will be bringing a limited edition of Ar nosurge™ Plus: Ode to an Unborn Star to North America on July 2, 2015 for the PlayStation® Vita! This turn-based ‘7 Dimension’ RPG is a remake of Ar nosurge™: Ode to an Unborn Star, updated with with new costumes, new “purification” partners, and some DLC available in the previous version pre-loaded on this game!

About the game:
Ar nosurge™ is a fantasy, sci-fi, ‘7 Dimension’ RPG that takes place in a world where music and song can create magic. It tells the compelling story of a civilization that lost their planet and has been roaming the edge of space for 2000 years in search of a new home.

The player follows two sets of characters: Delta and Casty, whose goal is to protect humanity and save the world, and Ion and Earthes, who are trying to find Ion a way home to Earth. The player can change between both pairs and discover a way to combine their storylines and strengths to eventually solve the mystery that shrouds their ongoing struggles.