Atlus has been a roll of late when it comes to experimenting outside of “what usually works”. Persona Q was a perfect example of how a serious Dungeon Crawler like Etrian Odyssey could be when merged with the much more story designed machinations of the Shin Megami Tensei Persona sub-series. Cracking at the edges once again with an almost make it or break it mentality, Etrian Mystery Dungeon makes it by challenging you in the fashion that Roguelikes are so good at. 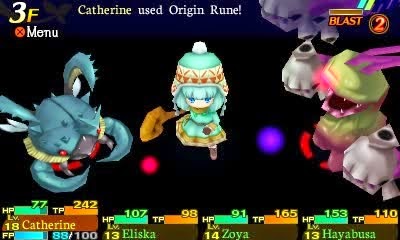 Etrian Mystery Dungeon takes everything that anyone knows of the Etrian Odyssey series and switches it from a First Person Dungeon Crawler to a Top-Down Roguelike. Players familiar with the series will find a lot of familiarity in the character classes as they are identical to their main series counterparts. Stats, skills, equipment restrictions, everything in that regard is exactly the same allowing fans and longtime players to find a quicker footing. What changes however is the full 3D of the environments into the top town Roguelike system of the Mystery series in which characters move between large rooms and narrow corridors making their way down to the lowest floors in search of loot and glory.

Starting players off with a Landsknecht (the series staple for the basic but never obsolete fighter class and very missed in EO3), an in-depth tutorial teaches players how to handle the basics of the system. Everything from movement to attacking and using items is covered. A great feature that I was more than glad to have was the ability to hold down the left shoulder and have movement locked to the diagonal directions. Being able to not worry about miss-stepping in that manner and getting hit as you walked by was a very nice touch.

Dungeon floor layouts in Roguelikes are generally random. What isn’t though is the overall layout as players can either go up or they can go down between floors before entering another random layout. Once again changing how things are done, floor and dungeon layouts are random every time you go into a dungeon making for some interesting dungeon crawls. Instead of just being able to go up or down, the party can both go up and down diagonally. Keeping track of which room essentially that you are in is easy enough with the bottom screen which can be toggled between the current map layout and that of the overall dungeon to plan out your next move. It is a lot to take in at first since there are multiple stairs available and in some cases three sets going down and others going back up to different rooms. 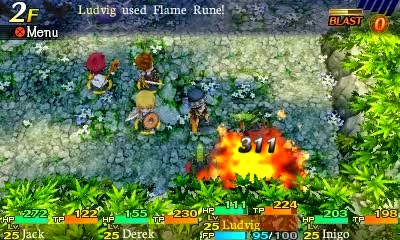 Having played many Roguelikes over the years there is one thing that more or less came about in the Souls games and I am more than glad to see an implementation of it here. If your party falls in battle, not all hope is lost. Unlike the Souls games where you run back to pick up your body and regain anything that may have been lost, Etrian Mystery Dungeon allows for a second party to be sent on a rescue mission. This second party can prevent the loss of of items and money if they can make it to their fallen comrades. Pretty much means that if you’re not quite willing to take the chance, then more than one party should be constructed in order to be able to pull off a successful rescue. Once rescued, the party is brought to the Inn in order to store any valuables or money before stating that the rescue quest is complete. Forgetting to do so will make the point of the quest moot other than having saved the equipped weapons.

Between random layouts and rescue parties, there are options open to our adventures to ease their explorations and rescues into the dungeons. By loading up the Map interface, the party is able to place a Fort which puts the dungeon on lockdown not unlike in Rogue Legacy. These Forts are special buildings that cost a decent amount of cash for even just the default model as they do more than just put the dungeon on lockdown. This function was perfect for players like me who carefully pick four characters and stick with them as it allows placing up to four adventures not currently in your main party to level up while your party itself is out on a dungeon crawl.

While a lot of time will be spent down in the various dungeons defeating monsters and acquiring massive amounts of loot, you will need to go back to town at some point to sell it. The town system not unlike the main Etrian series hosts several different establishment types for all of your adventuring needs. For a bit of a change, players no need to worry about sleeping at the Inn as once the party heads back to town they are already healed as is a staple of Roguelikes. Instead of replacing the Inn outright, it still allows for players to manually save their game as well as store both equipment and money to make sure that nothing is lost if the party falls in battle. 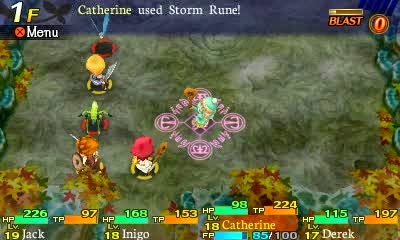 On the train of new features which was quite interesting was the addition of the restaurant. This not only acts as the class hub, but also allows the individual characters in the party to eat food for stat boosts as we’ve seen in Capcom’s Monster Hunter series. The versatility of being able to feed each character a different dish allowed for some rather decent planning decisions in regards to what classes were going down into the dungeon. Then again it should be noted that this is planning. We all know what happens to the best laid out plans. Every now and then though, things do go according to plan and things pan out.

There are a crazy amount of features which are available to the player in order to move up or down the floors on their monster slaying, quest completing, loot acquiring adventures! With everything that is there though, even on the “New” Nintendo 3DS there were a few times in which issues could arise. “Running” through corridors between rooms not unlike the main series could cause the frame rate to crumble as it tried to process too much at the same time. While it’s not a super huge thing, it could happen often enough that to spare the strain on the eyes I would instead just walk normally to make it through instead of trying to shave off that extra time.

Another item that could find itself patched to smooth things over are the menus that can sometimes be a tad frustrating. The design of the menus is great as the main list is quite short opting for more sub menus that can be easily navigated with quick presses of buttons instead of selecting everything manually. What gets in the way however is that once equipment has been selected, the player is thrown back into the gameplay instead of being able to equip another character or even another item on the same character making it quite frustrating when all you want is to stay inside that menu. In this case the efficient design actually works against being efficient. It takes a while to get used to but once you do it’s more of an annoyance than a game breaker. 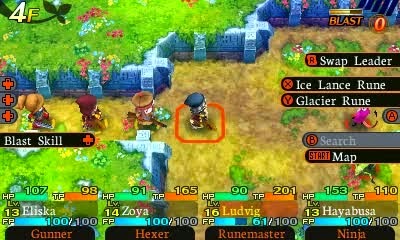 Finally there is the option to acquire DLC. This is one of those acronyms that can spark conversations and arguments before it is even over being said. Powerful three letters. “Day 1” DLC comes with even greater heat. Etrian Mystery Dungeon came with Day 1 DLC which that added various extra quests that could be accepted that yielded some rather decent rewards. That being said however, Atlus approached the situation a lot better than most have by making all five DLC free for an entire month after release as a way to say thank you for picking it up. After the month is up, the price point will be between 1.50-2$ USD each respectively.

While there are some issues, fans of both Roguelikes and the Etrian series will find that Atlus and Spike Chunsoft (the creators of the Mystery Dungeon Series) have really nailed one hell of a rogue-like. With the little time actually spent in the menus, Etrian Mystery Dungeon was more than worth the hours spent roaming through the ever changing walls of each location’s dungeons in a true unforgiving Roguelike fashion.