Shovel Knight is a love letter to classic gaming. Thankfully it manages to be fresh, taking current gaming conventions and playing them out against all kinds of classic NES throwbacks. The end result is a charming, challenging experience that would have been at home on any number of consoles over the years, but still feels perfect on the PlayStation 4 as well. By now, you have likely heard of Shovel Knight. Marc reviewed it for us upon PC release and absolutely adored it. He has a soft spot for these kinds of classic adventure games and why not? They are among the best titles the NES era had to offer, and Shovel Knight manages to call upon a variety of classic titles while still feeling distinctive in its own right. With a pogo attack out of Duck Tales, villages that remind of Zelda II, eight bosses that harken to Mega Man, secondary weapons that made me reminisce of Castlevania (as well as finding chunks of meat in bricks) and an overworld map that would have been right at home in Super Mario Bros. 3, it would be easy to dismiss Shovel Knight as a clone lacking in its own identity.

Shovel Knight certainly tugs at your nostalgic heartstrings, but it carves its own way in satisfying fashion as well. The visuals are classic with an intentional blocky look to them, but at the same time I was able to appreciate that there was no flickering, no slowdown and that there were in fact moments when there was a great deal happening on the screen at once that would never have been possible during the 8-bit days of gaming. 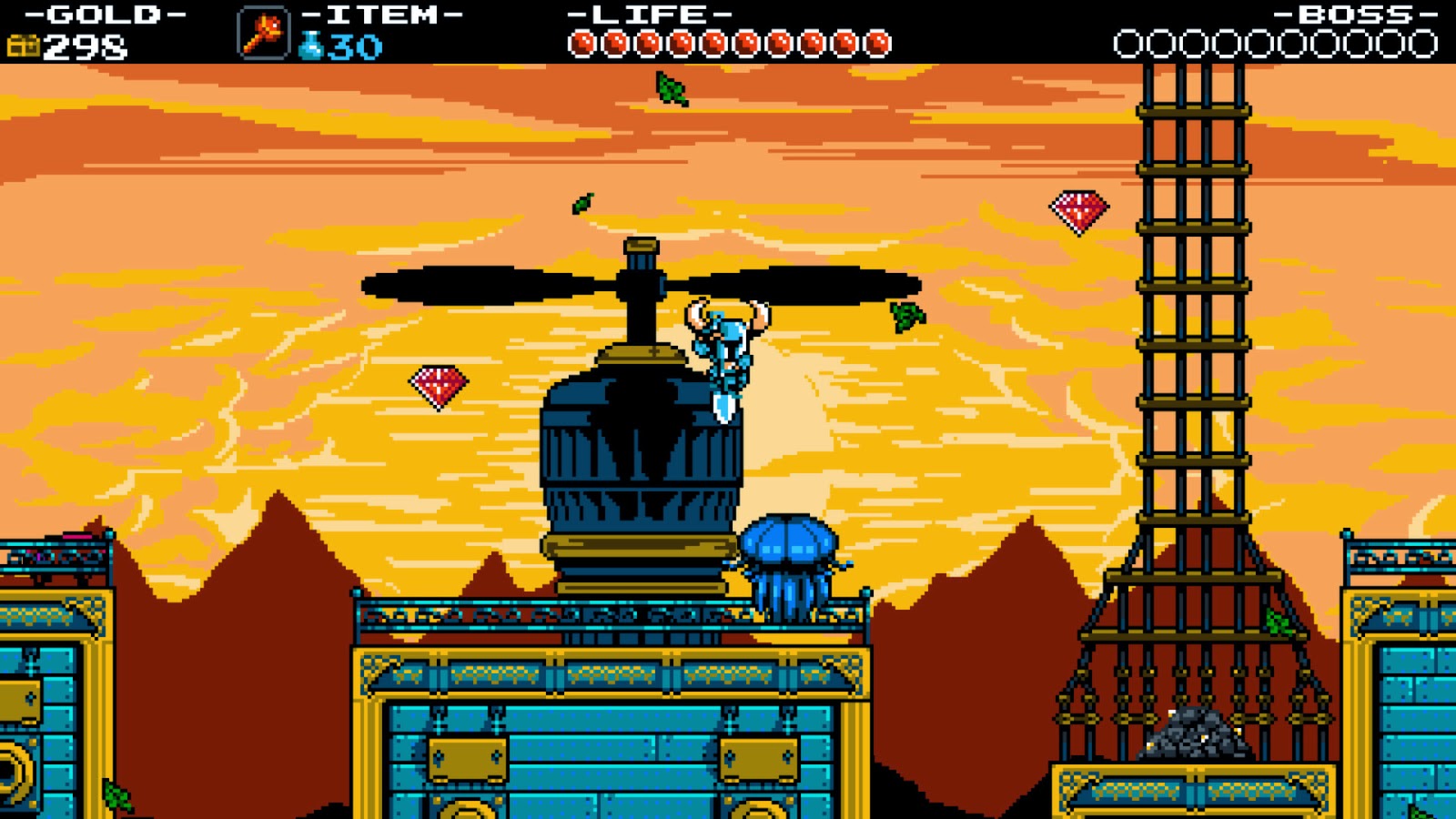 While addressing the presentation values, it would be borderline criminal not to make a mention of the soundtrack here. Shovel Knight revels in its bleeping and blooping sound effects, but the chippy music is as memorable as anything you will recall from the old NES days. It may lack a grand, impressive orchestra of instruments like those found in The Elder Scrolls games, but rest assured a lot of love went into the Shovel Knight music and it pays off.

The controls and core gameplay are comprised of the same demanding hand-eye coordination that classic NES titles challenged us with all of the time. There’s a jump button. There’s an attack button. There is a menu and there are special attacks. It all feels very simple, yet the challenge is in clever level design, difficult but fair gameplay and a sense of wonder as you explore the map and take on either the tasks required to complete the proper storyline or even just some side adventures that might allow you to unlock some cool new goodies. 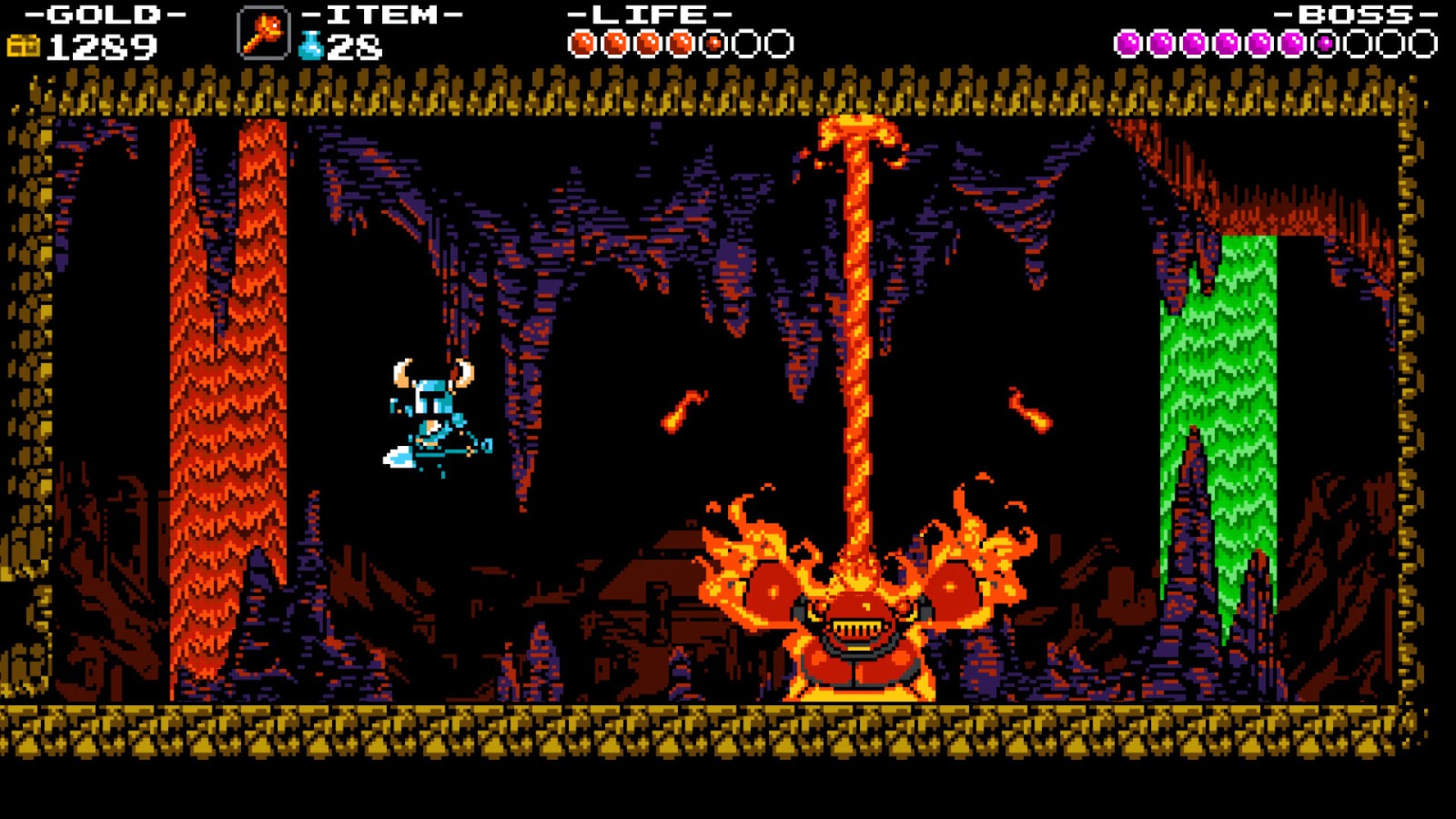 Your character is an amusing little guy, who wields a – you guessed it – shovel. That is even poked fun at in the first village when you approach and talk to the guard standing there. He informs you that anyone is welcome, but that they do not allow weapons in the village. He then realizes that you don’t carry a weapon, just a regular old shovel. After a bit of a chuckle at your expense, the guard says nothing and lets you through. That shovel however, is your key to victory. Pogo attacks onto enemy heads or parts of the environment serve as damaging strikes or a means to further explore your environment. Swiping the shovel can obliterate your enemies or just dig up piles of dirt for extra currency.

Currency is key, because you will need to purchase things like additional maximum health and magic, new magic items and more as you try to upgrade Shovel Knight for his quest. You are certainly allowed (and really, encouraged) to go back to areas you have beaten to help grind some more funds if you get stuck, but all of the hearts in the world will not help you if you do not take the time to memorize boss patterns and hone your reflexes for the often challenging platforming.

Thankfully, Shovel Knight does show that it belongs of the more modern era in gaming in how it allows you to save your game at various checkpoints. Of course, if you do not want said checkpoints, you can feel free to smash them for additional coins, deactivating them – but for those looking for a more forgiving edge to Shovel Knight, these checkpoints do provide just that. Add to it the ability to play cross-platform between the different Sony consoles and a New Game+ option for those who come out victorious, and we have some great modern sensibilities to top off a classic gaming experience.

I recently had a chance to play Axiom Verge for the PlayStation 4, and it – like Shovel Knight – provided an amazing throwback experience to my childhood NES days. Both titles manage to accomplish just about everything that they set out to do, though Axiom Verge really emulated just a single title very well in Metroid. Shovel Knight took the best components of multiple games, stirred them up in a creative pot and put together a beautiful title that recalls the best of NES gaming while standing on modern legs of its own.