Most of us have fond memories of that one game that started us on a path to loving a particular genre of game or recalling a specific gaming console very fondly. For many people I grew up with, Super Mario Bros. came to define both the NES and platforming. Mike Tyson’s Punch Out or Tecmo Bowl represented sports fans very well. I enjoyed all of these and plenty more formative classics at the time from The Legend of Zelda to Dragon Warrior, Metroid and Final Fantasy. However, one of the most telling games from my childhood was a strategy title very few people seemed to know anything about, called Nobunaga’s Ambition. 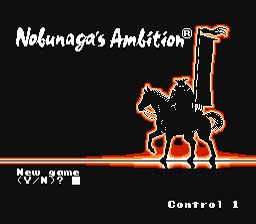 Considering RPG, Strategy and Sports games probably rank as my top three genres in any give order, I often find myself looking back fondly on those games as I recall what hooked me in the first place. A sense of progression, an appreciation for grinding and feeling like I have some tangible control over a storyline are all traits I enjoy today in my games. Now many games have crossed up features enough that the genre lines have become blurred. SRPG for those who like a combination of strategy and roleplaying, and even in modern sports games you have progression and career modes that focus on experience earned and stories.

Nobunaga’s Ambition was the first strategy game I recall playing. Certainly I had played some games with varying levels of strategic elements before (Hunt the Wumpus on my TI99/4a comes to mind), but nothing like Nobunaga’s Ambition. This game was set during the Sengoku period during Japan’s feudal wars. While the game is named after the famous general Oda Nobunaga, there were plentiful leaders that could be chosen. Different ages and starting states for their fiefs certainly created an uneven playing field, though I seldom actually chose Oda Nobunaga myself – there were a few others that I enjoyed quicker starts with based on their geographical location.

There were a quartet of scenarios to choose from when starting your game and you could choose a smaller map with fewer opponents or the giant map that had considerably more territory to conquer. While many strategy titles hang their hats on the combat alone, there was always a great deal more to consider with this title. There was the military side of things of course, but to be truly successful, your daimyo had to balance peasant loyalty against increased production. There is a market where you want to purchase weapons and sell rice when the price is high and purchase when low. There were ample opportunities for natural disasters as well, from sickness, weather and even revolts.

Political juggling certainly gives you an upper hand, but at the end of the day, taking over a fief usually boils down to combat on a myriad of battlefields. Some units performed better than others, landscape and soldier morale was also a factor. In the end, sheer numbers are usually the deciding factor. The combat is turn-based in structure and serves as the most exciting part of the game. 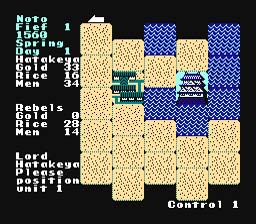 Nobunaga’s Ambition was clearly not for everyone. My dad used to rent me a new game most weekends, and he grabbed this one for me because he knew I had played most of the others available at the time. I had no idea what this was – I certainly would not have gone out of my way to pick it up because I had never heard of the game or Koei for that matter either. However, I was immediately hooked. One of my buddies came over that weekend and wanted to know what I was playing, and he was hooked. You could actually have up to eight people playing it at one time (you just passed the controller around hotseat style).

This certainly had a tendency to make for some long games (it had a save feature, this was no 40 minute Mega Man 2 run), and we never had more than three players attempting to participate at a time. One of them quit on us (you can turn control over to the computer at any time if you want to just speed along and see how things play out) after a few weeks. 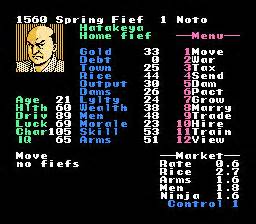 A large number of Nobunaga games (over a dozen) came out in subsequent years, though Koei produced other strategy titles as well. Games like Romance of the Three Kingdoms, Bandit Kings of Ancient China, Genghis Kahn, L’Empereur and the fantasy title Gemfire became regularly played titles by myself and other friends. Nobunaga’s Ambition opened the door to a whole new genre for myself and also several of my friends and it has been one that stuck with us through the years. These games were not flashy. They were menus upon menus that provided gameplay in measured slices. Waiting for the computer’s turn to end was frustrating to be sure – but only because I was so incredibly anxious to make my next set of moves.

Given that there is a new Nobunaga’s Ambition coming to the US for the first time in many years this fall, I felt it was time to go back and revisit this title, which still has a place in my NES collection and a favorable position in my memories as well.