Once upon a time we didn’t need things like “Hard Drives” to be able to play our console games. Slap a Memory Card into a PlayStation 1 or 2, save straight onto the cartridge of a Nintendo N64 or the later Memory cards of a GameCube and you were good to go. Along came Microsoft and they introduced a new way of doing things. Why not do away with tiny memory cards and instead have a Hard Drive with limitless amounts of space instead? As we all know limitless didn’t last.

The PS3 and the Xbox 360 broke into new territory allowing developers to have their games install themselves for quicker loading and better performance. Add in a few patches here and there, some DLC content and all of a sudden there’s no more room. What do you do? Upgrade your storage unit or delete and play the space management game.

Nick recently upgraded his Hard Drive to a 2TB from the stock 500GB. While I had been wanting to also do this for a while as I’ve been playing the space management game as Breanna and I both use it for different games, I instead held off and almost went a different route. 2TB? In the 2.5” department (aka Laptop Hard Drives (HDD for short)) that always seemed a bit more expensive than they otherwise should. Why couldn’t I just slap in a 3.5” for a fraction of the price and almost double the size? There are some workarounds in which I almost attempted in the form of requiring both an external Hard Drive enclosure as well as one hell of a long SATA cable. While it seemed to work for most, the larger the drive the more issues that presented themselves especially at the 6TB point. So what do I do? Nyko came up with a solution not that long ago in which they created an adaptor that allows for 3.5” Hard Drives up to 6TB to be installed and work properly. Armed with a 3TB HDD that I picked up for super cheap on a flash sale at my favorite online computer retailer, I set myself to work.

Let’s honestly say that “work” lasted all of 5 minutes on my part as I made sure that with the multitude of papers that came with the device that nothing was being missed. For a really quick look at how fast it goes here was Nyko presenting it at CES 2015. That video is honestly all that is required. I had thought of trying to explain things but then it just got over complicated and wordy when he takes two minutes to show you. 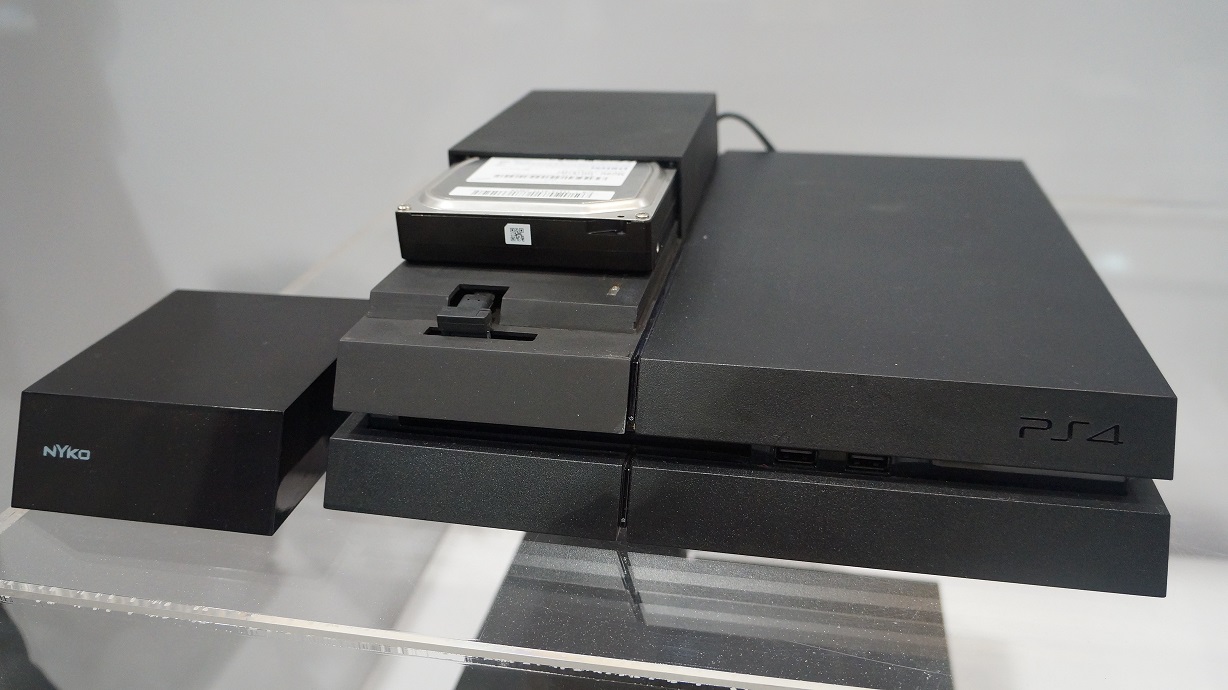 The Data Bank itself however feels rather sturdy. At no time while I was removing pieces from the box and setting myself up did I ever worry about breaking anything. There are technically four pieces in the box. The replacement unit for where the old HDD sits, the Data Bank itself, the new cover that is similar to the original one being removed, and a screwdriver. Here I was all ready with multiple screwdrivers depending on the sizes required and here they provide you with the only one you need. Setting about removing the older HDD and inserting the new one really took no time at all. Everything fit in snugly and just to make sure I moved it around a bit and there wasn’t even a hint of a sound as to anything moving around. Once the adapter was in and ready to go, the standard Sony instructions for formatting the drive and initializing the HDD didn’t actually take that long and I was soon back within the PS4 menus with 3TB minus the Operating System space to play with. By the time that I was done reinstalling all my physical games, downloading the network ones, and having the PS4 decide what needed to be patched, my service provide must not have loved me because then I had a few Steam updates to preform. What’s 360GB of bandwidth in two days anyways?

I mentioned a multitude of papers earlier that came with the Data Bank. These papers cover anything that anyone would need to do to go about installing this. There are three papers that individually go over how to physically install everything, download the required firmware for initializing a new HDD, and how to initialize the new HDD once it recognizes the firmware. Honestly with everything that Nyko provides, they have left no room for any errors which was great for anyone who has never done this before. While it was my first time upgrading my PS4, Sony hasn’t changed much from upgrading a PS3 so I had already felt quite at home during the process.

From a very quick start to a very quick finish, Nyko’s Data Bank works amazingly. I had honestly expected some issues while going about it because nothing is ever that easy, but it really was. So for anyone wanting to go over the 2.5” 2TB limit without the more complicated methods, this could be an option for you.