comments Share
You are reading
Roving Rogue – Wii U Review

Every now and then there’s something that comes along and takes me pleasantly by surprise. After landing on my desk, I figured that I was in for a good time with a solid platformer in Roving Rogue. This was especially so as my Wii U which doesn’t see much action of late other than a Mario Kart or Smash Brothers night here and there. Now I had an idea as to what I could expect going into things, but Instead of simply being a platformer in which our Rogue runs around teleporting across various stages, there is more than enough humor inserted in one of the weirdest ways that I’ve ever seen in a game. 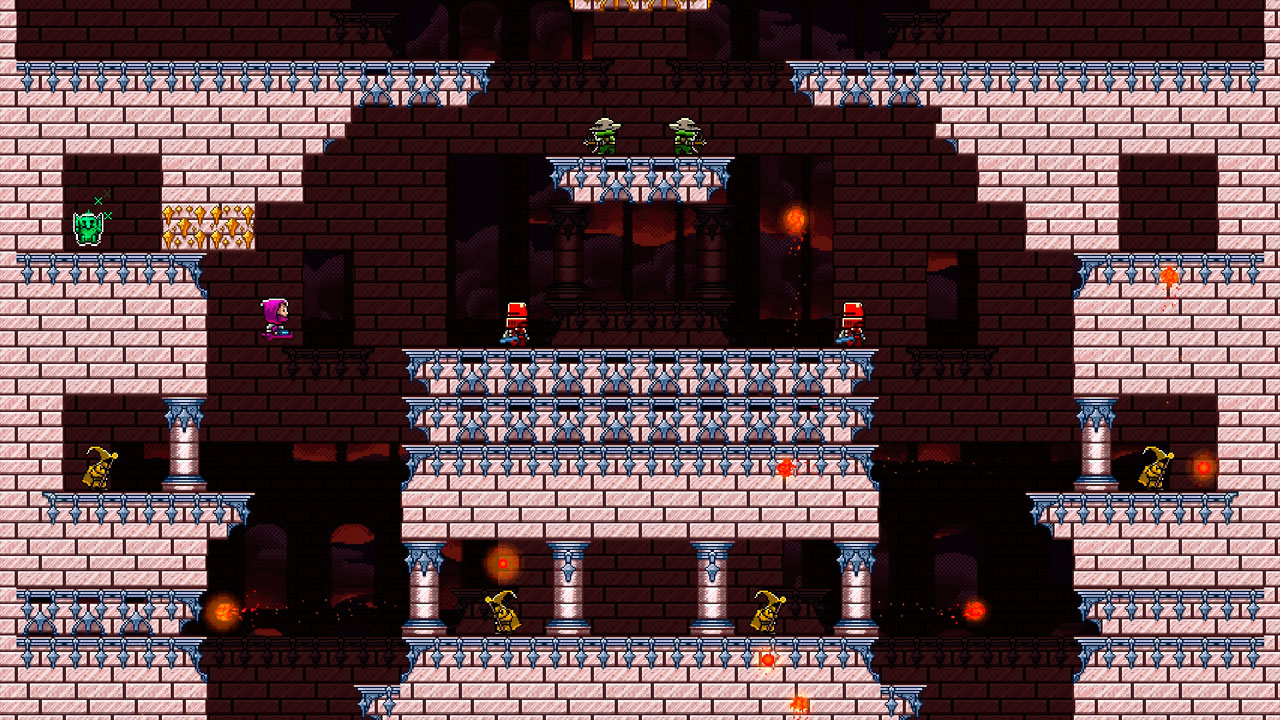 Roving Rogue starts at the end. Quite literally, the end of the game. Having forgotten as to why things turned out the way they have our Rogue goes about retracing his steps through the various chapters and stages to find out why he just stabbed someone in the back. This is where things get good as nothing is given to you.

Starting off on the stage selection screen, there is an option to view the provided journal which is nothing but gibberish entry after gibberish entry making absolutely no sense at all. After a few stages I took a look again to see if more information was available to read but there was only a bit of English here and there within the gibberish. A bit in a paragraph here and a bit in a paragraph there. Looking back at the stage selection it hit me to try something out. 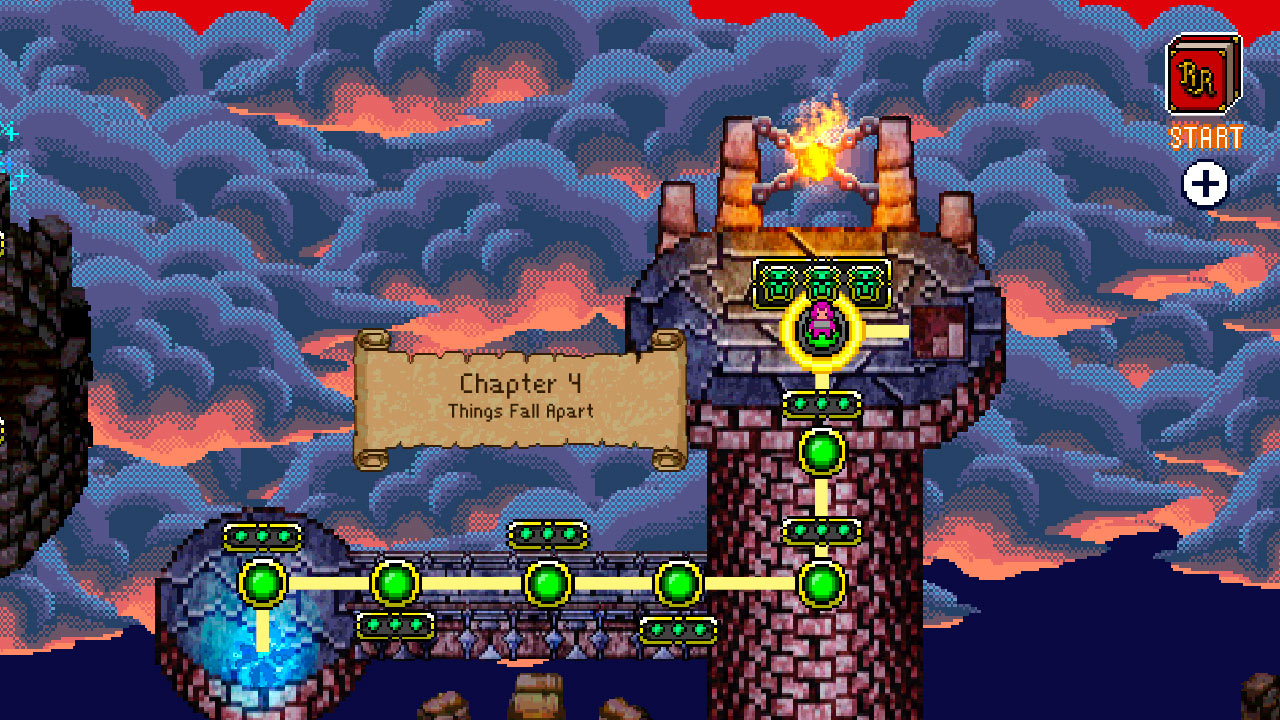 Each stage has a total of three collectables. Each one of these collectibles is something that is out of the way and not always in the easiest to reach place. That’s what makes these a challenge otherwise what would generally be the point of going after these? There’s no prestige in getting all of the K O N G letters, golden items in Wolfenstein, or Al Bhed primers if they were just easily acquired. Each collectible in this case follows that same principal while at the same time making itself fundamental in understanding what has happened. Collecting all three in a single stage will turn the gibberish into actual English providing pieces of the story one paragraph at a time.

Moving past the journal which grants players knowledge of past events, Roving Rogue introduces a hilarious form of in the moment storytelling prior to each stage. Using Twitter posts of all things, the various characters including the main one all post ridiculous one-hundred and forty character messages either taunting one another or simply describing what they are up to. I’ve seen games be embedded into Social Media, but I’ve never seen a game use Social Media as part of its core storytelling. 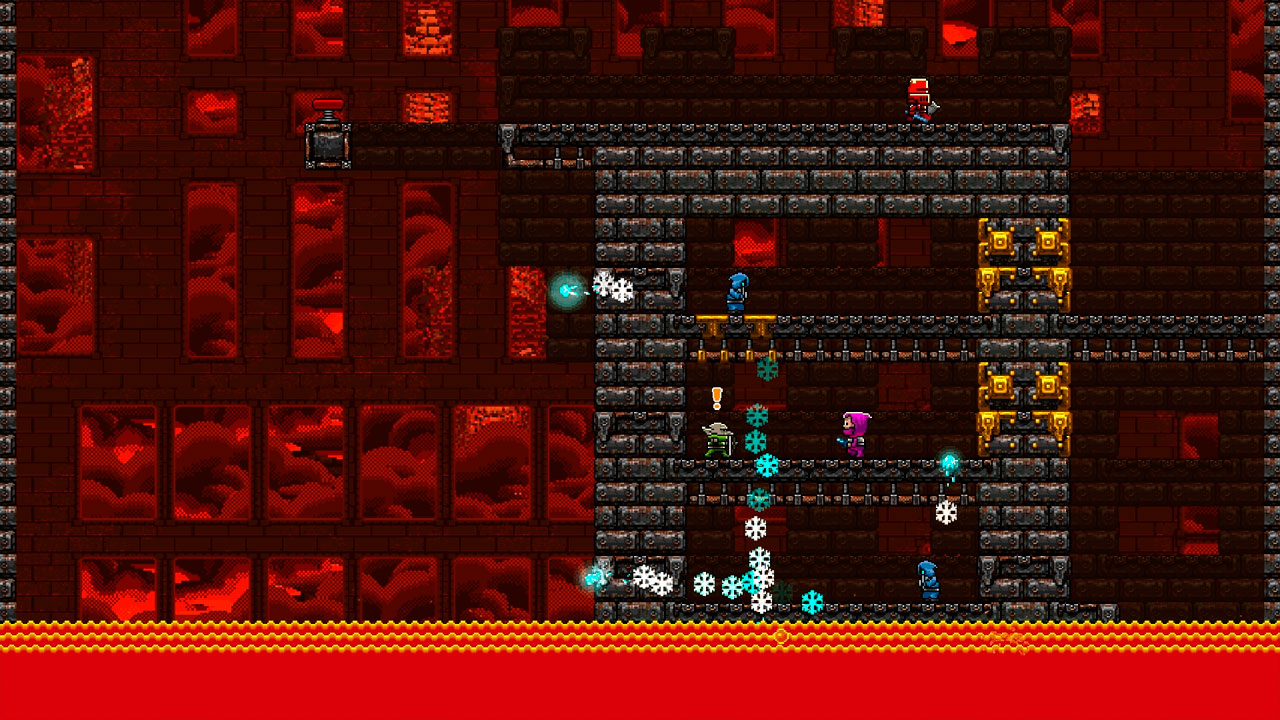 To not be left out, as interesting as the journal is and as hilarious as the Twitter posts are, Roving Rogue has a good platforming base. Going very far back in a gaming sense, players will be using a two button style as that is all that is needed. Moving around with either the D-Pad or the Joystick, our Rogue uses one button to Jump and another to Teleport. While this is theoretically easy, practice is a whole other ball game.

Each stage is a quick paced adventure of its own with either raising lava or falling rocks. Whether Vertical or Horizontal, each stage will have our Rogue frantically trying to make his way to the door at the end of the stage without being caught by the raising lava or crushed by the trailing boulders. While this would be great all on its own, adding the collectibles in sometimes VERY hard to reach places alongside enemies trying to kill you adds up for some rather decent challenges.

Making it through each stage can sometimes feel like a frantic affair with everything trying to kill you as you try to make it out in one piece. Thankfully while enemies come in varying styles, they all have one fatal flaw. They die when you stick a dagger in their back. It’s honestly really that easy. I mean that’s how the game started… uh ended? It gets confusing starting at the end sometimes! Alongside your trusty dagger is the ability to teleport.

Teleporting is limited in two small ways and needs about a good second or two between jumps. The first limitation is the possible teleporting distance making platforming skills still a necessity as our Rogue is only able to jump either one or two incremental distances away along the controller’s axis. The second limitation that our Rogue has is that teleporting cannot be done through normal floors, walls, and ceilings. Instead the only time that displacement is possible is when these surfaces are covered in gold. While these two are limitations upon the teleporting they make for some great platforming mechanics instead of only being able to do something mundane like jumping.

Roving Rogue is a platformer that isn’t afraid to merge old and new ideas without losing itself in the attempt. The combination of these two styles in tandem with the collectibles that unlock the story from end to start made going out of your way more than necessary if you want to know what is going on.