Secrets of Grindea is an Action Adventure RPG that pretty much blew all my expectations out of the water. Currently within Early Access on Steam, it already supports a robust multiplayer, full controller support, numerous skills to choose from, all while being supported by a hilarious dialog and a fun story. 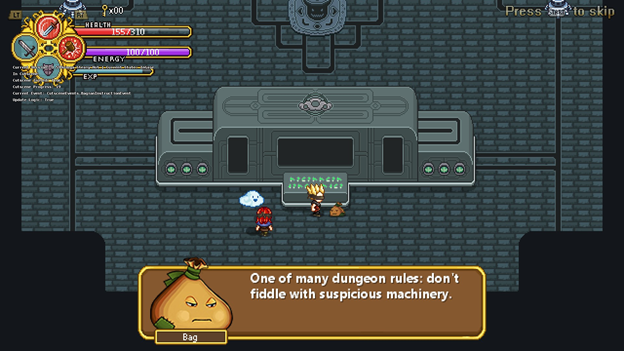 Action Adventures especially in the RPG domain are among one of my favorite gaming types which can sometimes mean that I get picky especially when nostalgia comes into play. Finding good to truly great examples that can stand on their own merits can be few and far between. This could be because they’ve borrowed too heavily from another making it no more than a clone, or it misses the mark due to a variety of reasons such as mediocre gameplay and lack of dialog, story, and quests to drive you forward. Secrets of Grindea even in its early stages hits all the marks and after putting it down for the night since both Breanna and I played together through the multiplayer Story option… I re-loaded it up and started a new character to try out something new without affecting my current character as I wasn’t quite ready to hit the sack not working in the next morning. (insert maniacal laugh here)

I felt the need to mention the above as the reason for starting a new character because there are no set classes for players to choose from. With no classes to choose from, resetting skill points was made readily available from the menu itself and not a specialized shop owner or townsperson allowing experimentation to be done rather efficiently especially while out exploring for long periods of time. This pretty much meant that my character for playing with Brie would be intact and at the same point as hers and not some new mega monster of ultimate power and destruction in comparison.

From the very start of the game as you acquire your sword and shield you are also given access to a two-handed weapon for increased damage if you so choose and the ability to learn magic. Everything is available. Weapon skills, Shield skills, Magic Skills, and Passive Abilities for all the above and more. Nothing is locked. If you want to summon an air elemental while shooting fireballs and swinging a two-handed weapon around while launching enemies like a baseball from a bat? (it is an ability and it rocks!) That’s entirely up to you. The level of freedom that is available was simply stunning. The only thing between you and the abilities you wish to learn are the experience levels needed in order to obtain points to customize yourself upon leveling up. 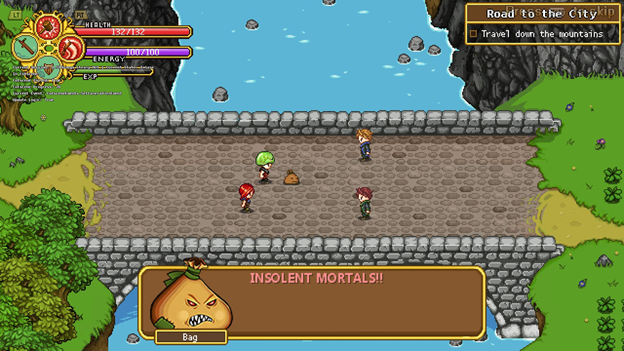 Moving around and fighting in combat are all done rather smoothly. Being honest though, there is perhaps one thing that both of us felt was a bit of a drawback until we got used to it. Players cannot attack on a diagonal which we thought was a bit weird as moving in a diagonal direction is simple enough. Short of this though, quickly swinging a sword, slowly swinging a two-handed weapon, launching magic meteors, or even throwing your two-hander across the map was all performed smoothly… well maybe not the throwing of your large weapon since you had to go pick it up yourself and can’t hit anything until you do. There may have been a few times where I had to get Brie to kill a monster as it wouldn’t move for me to grab my own weapon back. Very smooth on my part… not so much on my combat prowess.

Multiplayer brought in some very interesting elements. The first is that the dialog treated it as such. Never was a singular noun used when we were both being referenced. That alone is something that I’ve only ever really seen once while having access to identical story experiences in both solo and multiplayer. I can’t say where I had seen that anymore as it’s been a very long time so it makes it all the more impressive.

The level of detail outside of nouns was definitely appreciated. When talking to NPCs, if one party member was too far away from a conversation that required everyone to be present, it would not start. Instead of making someone miss out, cutting them off from their action, or moving them straight over disrupting what they were doing, you would be told to “go find your friend and come back”. Following on the heels of that level of respect, slower readers (aka me) or the opposite super fast readers (aka Brie), were each given their own display of dialog instead of having to share a common one. This allowed us to fully read through at our own paces without the worry of missing out on anything because one party member had already moved on. 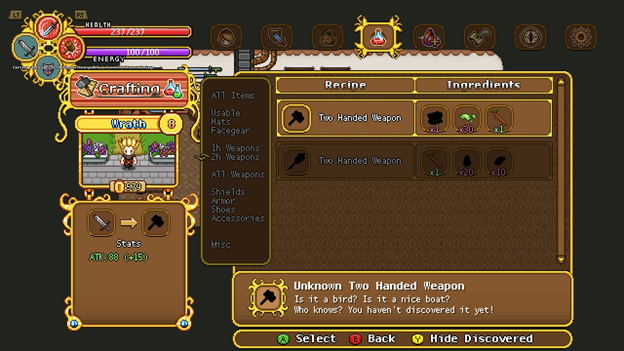 Everybody has their own paces when it comes to playing games. Some people read faster, others just like skipping over any dialog, and then there are those that run off to do their own thing. In certain cases that’s great. In others it can be a royal pain to the rest of the party that want to take their time. Making sure that no one player moves on ahead before everyone is ready, explorable areas and towns are designed in the same concept as the dialog boxes making everyone wait for the party to join up before transitioning out into another area.

Finally we come to falling in battle. Let’s be honest it can happen with a simple misstep during a boss fight or new enemies that you aren’t quite sure what they do other than hit like a freight train. When one player dies they become a ghost that can emote different emoticons while awaiting for their fellow teammate to resurrect them by standing absolutely still beside their spirit. No attacking, defending, casting. Nothing. This can be pretty hard in a boss fight so finding that right moment may not actually arise. If the entire party falls however then it’s a trip to the game over screen in order to restart from the entrance of the area that acts like a checkpoint. At this point nothing is lost. Actually Health is set to full so in some cases there is plenty to gain. 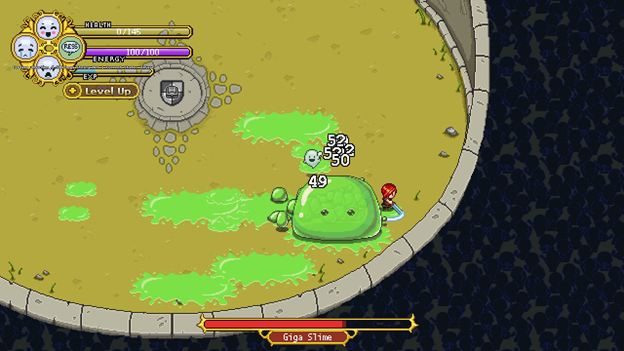 Before finishing, I would love to give a huge thank you to Pixel Ferrets for supplying Breanna and I with copies of Secrets of Grindea. It was a blast to play together and it’s honestly one of the better Action Adventure games that I’ve played in a long time and it isn’t even finished yet!

Secrets of Grindea is more than worth the time spent with it both together with others or simply on your own. There are many more features like Fishing, Crafting, and an entirely separate Arcade Mode to be explored and experimented with which simply add the the incredible repertoire already present.

Keep it up guys! We can’t wait to keep going and exploring the yet to come areas in the story mode!