Reviewing anime is still a relatively young process here at Chalgyr’s Game Room so when the good folks over at NISA  sent along a review copy, on blu ray, of Toradora! we were pumped.  Toradora! Is a romantic comedy that centers around high schoolers Takasu Ryuji, the male lead, and Aisaka Taiga, the female lead, as they learn to love, lose, and live in a very turbulent time frame in their lives. Does the anime adaptation of this rom-com live up to the popular light novel and manga formats? 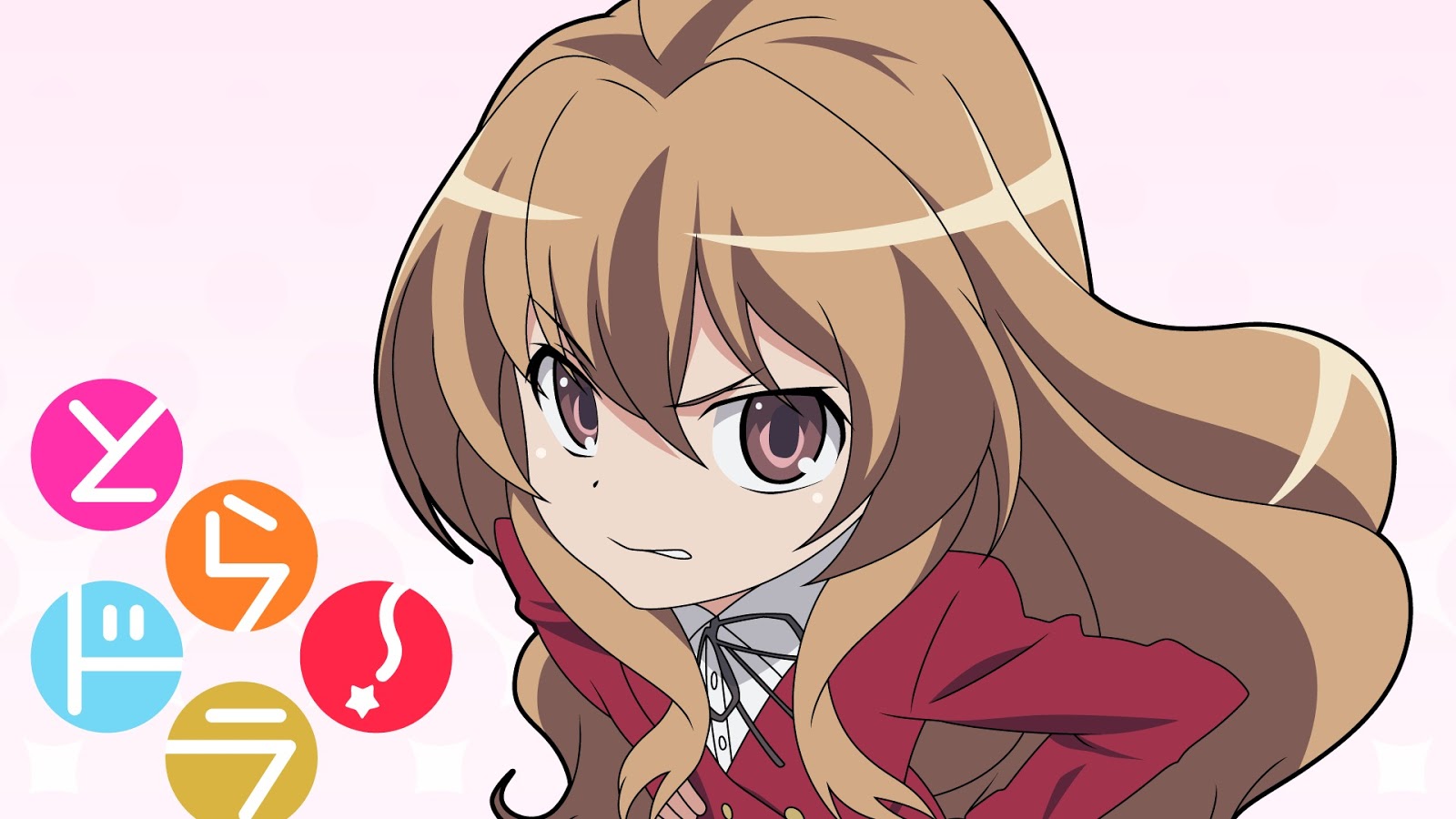 To start I just have to say that Toradora!’s first opening song is one of my favorite openings of all time. The song, called Pre-Parade in English is actually sang by the seiyu for the three lead females in Toradora! (Aisaka Taiga, Kushieda Minori, and Kawashima Ami) and has this perfectly up-beat, bubbly sound and while light-hearted it also has a whimsical, almost romantic undertone. I honestly love it and it perfectly sets the tone for the series. Head on over to YouTube for a quick listen: https://www.youtube.com/watch?v=fVKmASU7Xa0  On that same note, the ending (Vanilla Salt), second opening (Orange), and second ending (Love Jellyfish) songs all leave a bit to be desired and do not quite capture the soul of the series as well as Pre-Parade, though Vanilla Salt does come close.

From the very start of the first episode (titled “Tiger and Dragon”) you will notice that the animation quality and art style are just as high quality as other J.C. Staff works. Character designs are both interesting and believable and in what I find a rare turn of events for anime, the main characters have more than one or two outfits; normally you will see a character in their uniform  maybe a casual set, not here though, there are a number of different outfit changes for each of the characters (though a majority of the time is still spent in their school uniforms). “Tiger and Dragon” opens showing Takasu Ryuji trying to fluff up his hair using hair care products in his bathroom only to have him spot mold and grime, from there he goes into a fever as the narration that sets the story takes place. The big focus for the first half of the first episode is on Ryuji’s looks.

Atypically speaking anime characters with understated hair, small/narrow eyes and non-existent irises are depicted as “bad guys” and our leading male protagonist fits the bill for the bad guy trope, even though he is actually a nice guy. The second half of the episode introduces the female  pipsqueak protagonist (nicknamed “Palm Top Tiger” for her small stature), Aisaka Taiga who is about as tsundere as they come (she is rated right up there next to Neon Genesis Evangelion’s Soryu Asuka Langley in terms of top/most recognized tsunderes). For those that are unaware of the different dere types out there Kotaku put together a fantastic article regarding the different character types; you can find out more at: http://kotaku.com/how-to-identify-popular-japanese-character-types-1169085239 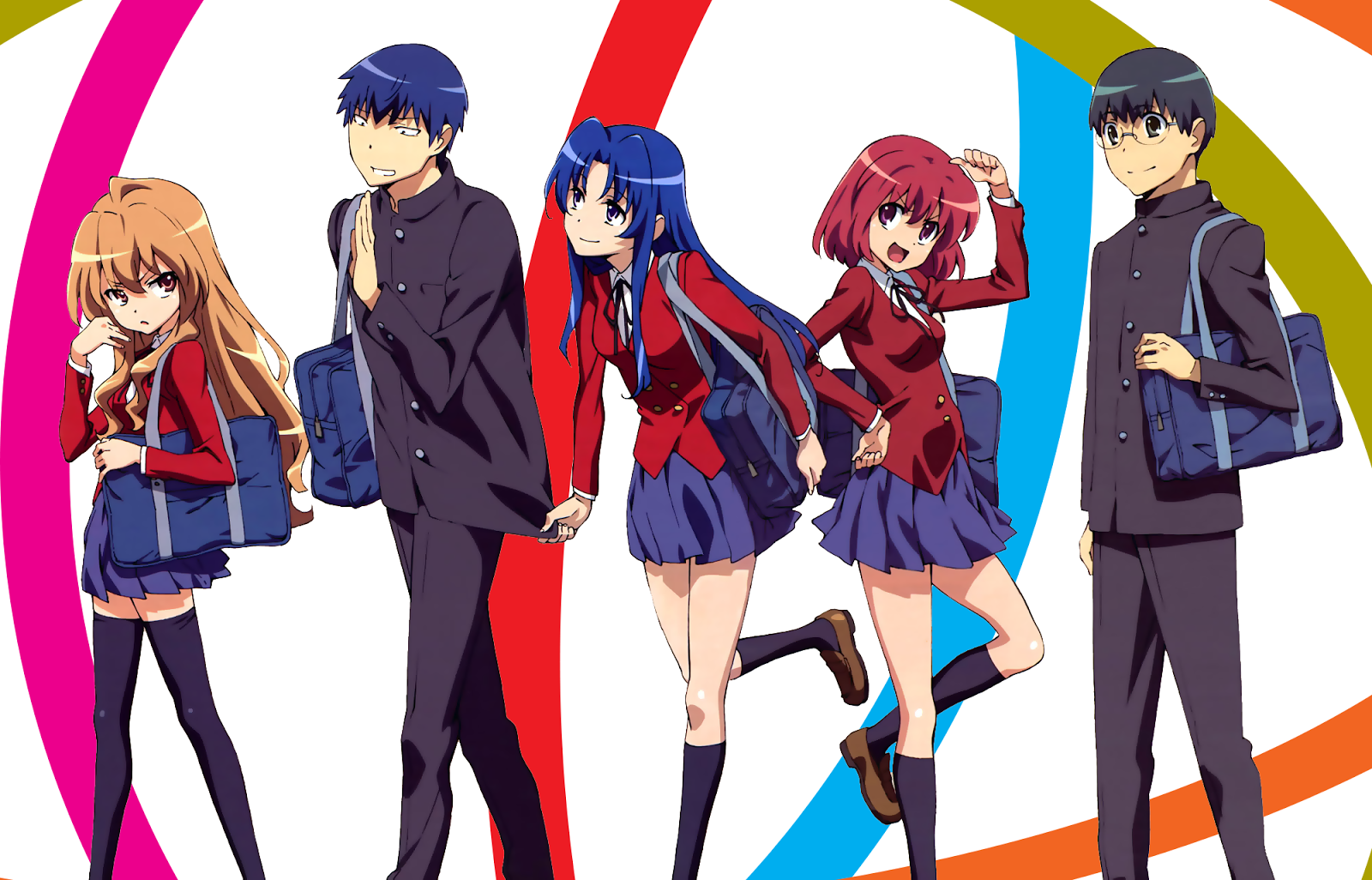 The first episode will also introduce Ryuji’s love interest, the hyper active and relatively adorable Kushieda Minori, who happens to be Taiga’s best friend. You will also meet Taiga’s love interest, Kitamura Yusaku and he just so happens to be Ryuji’s best friend. As with most high school-era anime, the opening episode takes place during the first day of school and as with most anime the two protagonists have a fateful encounter (which ends with the feared Takasu Ryuji flat on his back after receiving a haymaker from “The Palm Top Tiger”). From there we go on a relatively hilarious adventure of love, loss, and sacrifice. As the series wears on you will meet the genuinely confused amateur model and pseudo-famous Kawashima Ami (who, truth be told, is my favorite) who is a unique character in that she is both a protagonist and an antagonist; you can never tell what it is that she is really thinking or what her end goals are and she is very well written.

Throughout the 25 episodes you will follow Ryuji and Taiga’s journey through their second year of high school as they try to “hook up” with the ones they love, only to have their whole world’s turned upside down in this romantic comedy adventure. 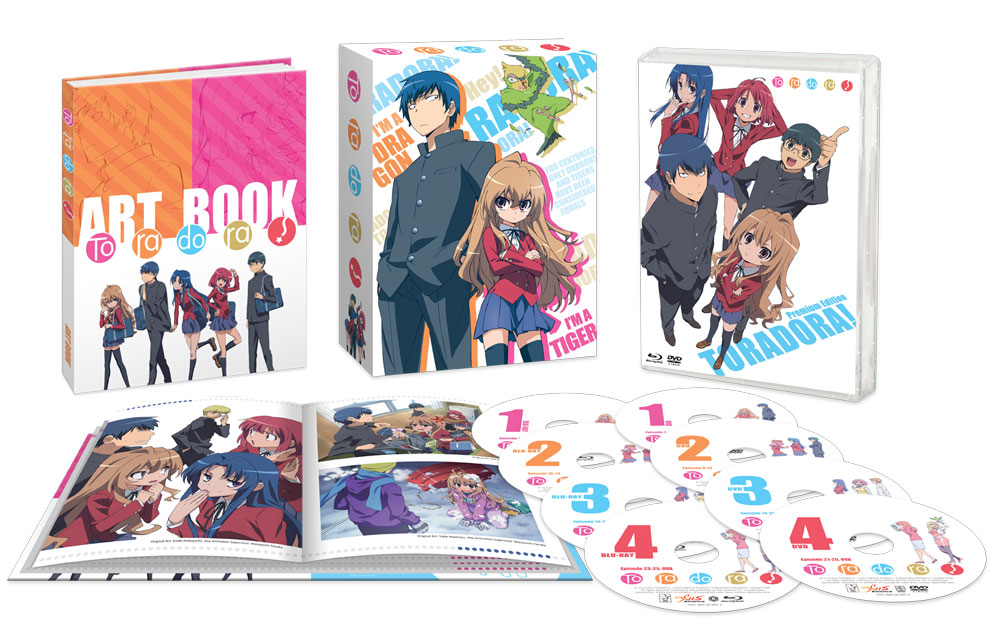 The Complete Blu Ray set that we received features both the original Japanese dub with English subtitles as well as the English dub. The seiyu for the original dub are fantastic,, likely due to their experience. Taiga’s seiyu Kugimiya Rie has upwards of a hundred plus anime that she has stared in and has been dubbed the “Queen of Tsundere,” though she plays more than just the tsundere, as one of her most prominent roles is as Alphonse Elric of the beloved Fullmetal Alchemist series. Other roles include Louise from Zero no Tsukaima, Happy from Fairy Tail, and Kagura from Gintama. She is not the only heavy-hitting seiyu though, as the entire cast of characters in the original dub have equally impressive resumes. The English dub leaves a little to be desired though, but looking into the voice actors you can see why; there are not many that are truly experienced, though  Cassandra Morris, Taiga’s English voice actor, may be recognized by her role in the spectacular Sword Art Online series as Leafa / Kirigaya Suguha. While I do not prefer the English dub it is perfectly serviceable for those of you that find reading subtitles tiresome.

With the music, acting, and animation so excellent the story has a lot to live up to and  for the most part it does. Like most anime though, the first 19 or so episodes are phenomenal then all hell breaks loose and things get weird; Toradora! Is no different. From about episode 20 to 23 things just get weird and off kilter and the last episode feels rushed though it does wrap things up nicely. Following the life of two wildly different people, one caring yet scary looking the other scary acting yet truly vulnerable and their quest for love is touching, funny, and still cause for Toradora! Being one of my favorite anime. It is an easy anime to pick up and watch, laugh, cheer on your favorite characters, and then want more after the end credits roll. I for one am a fan and strongly recommend those of you that are looking for a good laugh and a touching, if trope-heavy series, sit down and watch.