I have played some interesting games up to this point in my life and Way of the Samurai 4 is absolutely one title that can fall into that category. You begin by getting off of a small boat in the tiny port town of Amihama during mid 19th Century Japan. What do you from this point on is entirely and literally up to you. 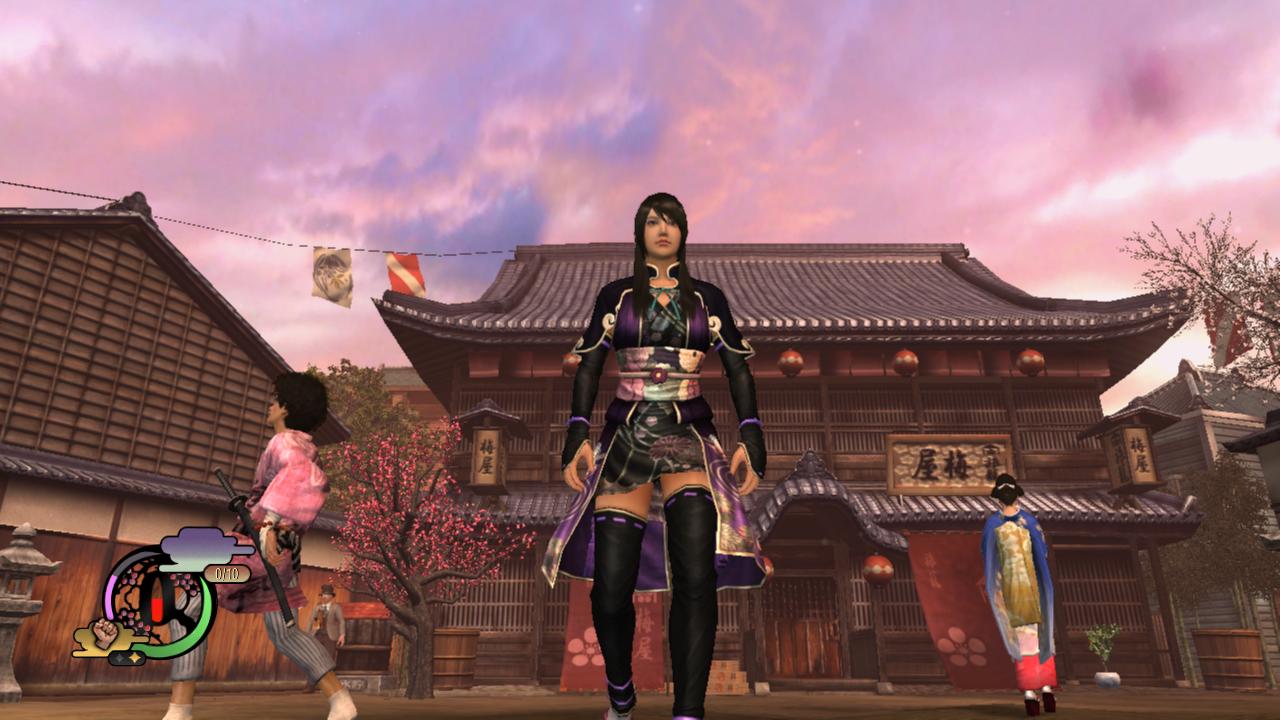 I have to preface this by saying that there is just about nothing serious in the tone of Way of the Samurai 4, other than the time period and the changes that Japan was going through. Never taking itself seriously, there is a lot of fun to be had – especially if you don’t mind the crazy characters and townspeople that you can run into while strolling about the town in nothing more than boxer shorts. Yes you read that right. I forwent the Kimono and traditional Japanese underwear for a pair of blue and white striped modern day boxers. I eventually found a long pipe to go with that as I strode around bare foot, surprisingly never being looked at twice. Guess I wasn’t the weirdest person there with all the British wearing their dresses, three piece suits, and top hats.

Before being left entirely to your own devices, there is a prologue that offers to teach players the basics in the form of being told what to do by a common townswoman. Then again, considering that she teaches you both basic and advanced moves by yelling at you as to how to do them… I seriously wouldn’t want to meet her in a dark alley as she knows what she’s doing. While the basics may be simple with light and heavy attacks, dodging and blocking, putting them into play will be an entirely different story and will take time to get right.

While a lot of the dialog, character personalities, and random townsfolk fall into the weird, fun and quirky categories, combat takes itself very seriously. There is no goofing around for this samurai and his weapons. If you fight and your enemy and lose, you’re Dead. 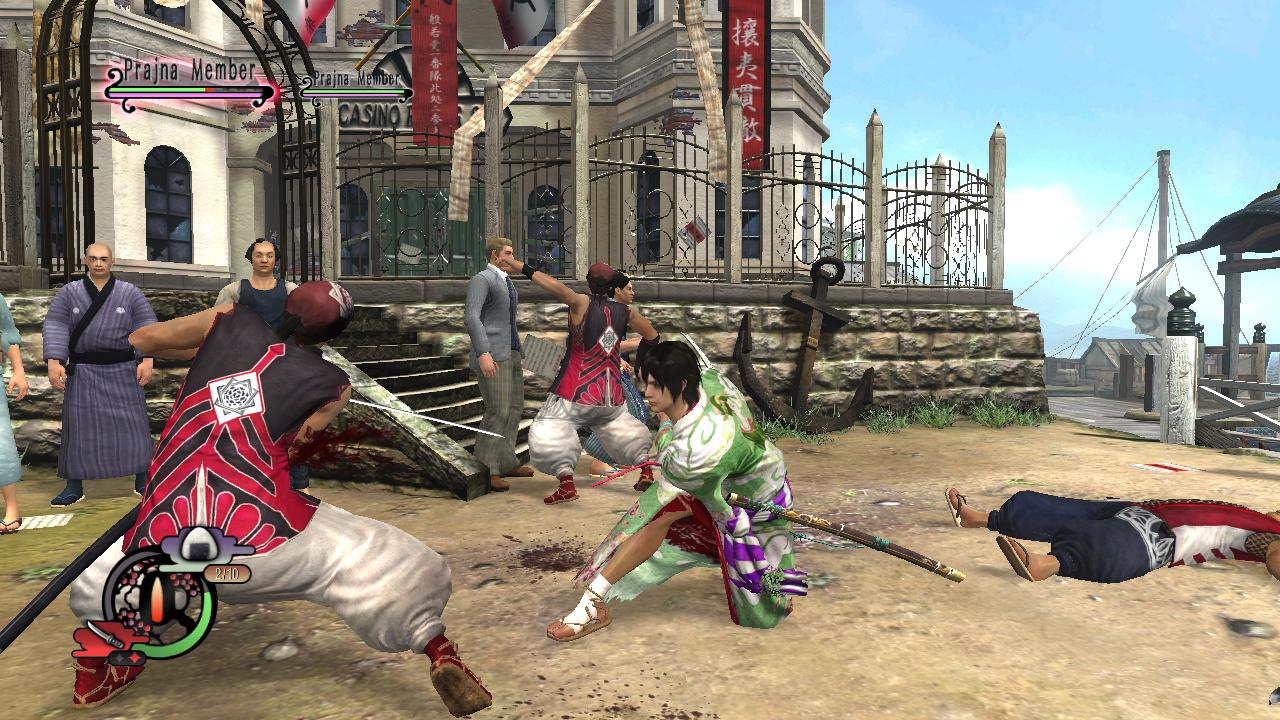 Game Over Man, Game Over.

This took me a bit by surprise the first time that it happened as I had barely gotten my feet wet so to speak. I accidentally chose dialog in the opening fight making myself surrender as I tried to quickly yell a taunt, was then tied up and thrown onto train tracks, saved but lost everything that I carried, and then picked a fight with a side quest mark after having told a woman being stalked that I would up put a stop to it. I faced the stalker while being barehanded and lost. Miserably…

Once faced with the dreaded game over screen I realized one of two things. A) I had to get better and not suck so much the next time and B) Way of the Samurai 4 almost has a Roguelike element to it as any experience in martial art styles and weapon forms are kept and carried forward along with a few other little things on your next attempt at life. Starting right back on that boat leading up to the docks, players can once again decide to follow the same first decisions or go about another route.

Once back and into the tutorial fray I actually decided not to sully my blade but instead use my fists of awesomeness and toss my enemies around like ragdolls until they couldn’t move anymore which is another of the charms that showed itself. Swords aren’t everything and different weapon styles or lack there of are just as fun as one another. 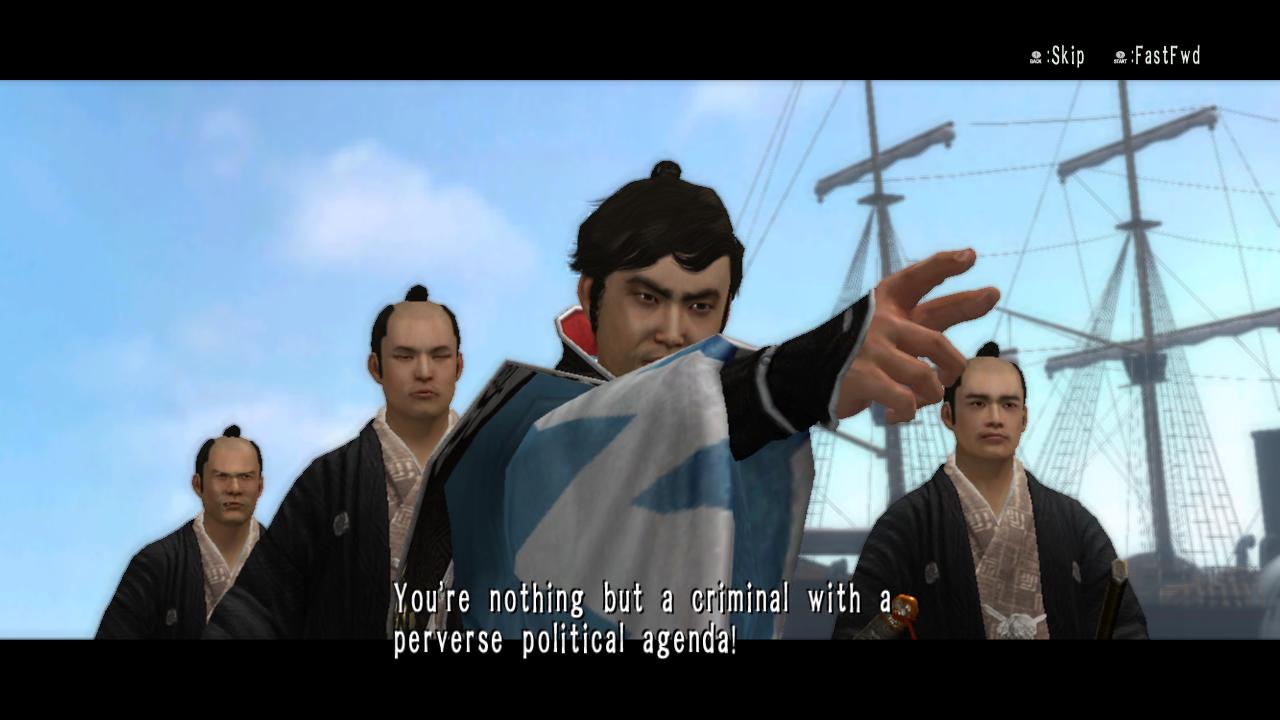 Way of the Samurai 4 in a lot of ways made me think of Akiba’s Trip in the way that you have access to an entire town at all times to do really whatever you want to do. Once you are taught the basics, the town is at your fingertips. At this point I honestly stood there taking everything in and wondering to myself… what do I do now? I’ll be honest that open-ended / open-world games are generally not my thing as I much prefer to play something with an actual direction that provides distractions but also a clear course. So what is one to do? I went after thugs for a good while better my armed and unarmed combat skills while picking up money and other weapons to disassemble or sell.

One thing that didn’t take long to notice was that if I’m really going to last against tougher foes then I was going to need a better weapon. Enter the very well oiled and muscular man that happens to be the Blacksmith. Here is a man that can make modifications to your weapon by upgrading the base strength to making it harder. Like everything that I’ve been through of late there is a catch to performing such a feat and that is that by upgrading the strength of the weapon, you decrease its durability. Honestly, this felt more than a fair trade as I didn’t have to swing or block as much to even kill some certified badasses that what into town after a few events. Being on par with them was more than worth it.

Fighting in the streets was generally not an issue depending upon the part of town that you could currently find yourself in. Fighting in the wrong part of town however, the upper quarters, it didn’t take long to get yourself arrested. This is another part that just felt like it was off the wall and made me wonder where they got their ideas. So getting arrested I figured wasn’t so bad until I found myself tied up, again as it wasn’t the first time, and then suspended upon a spiked wooden horse. 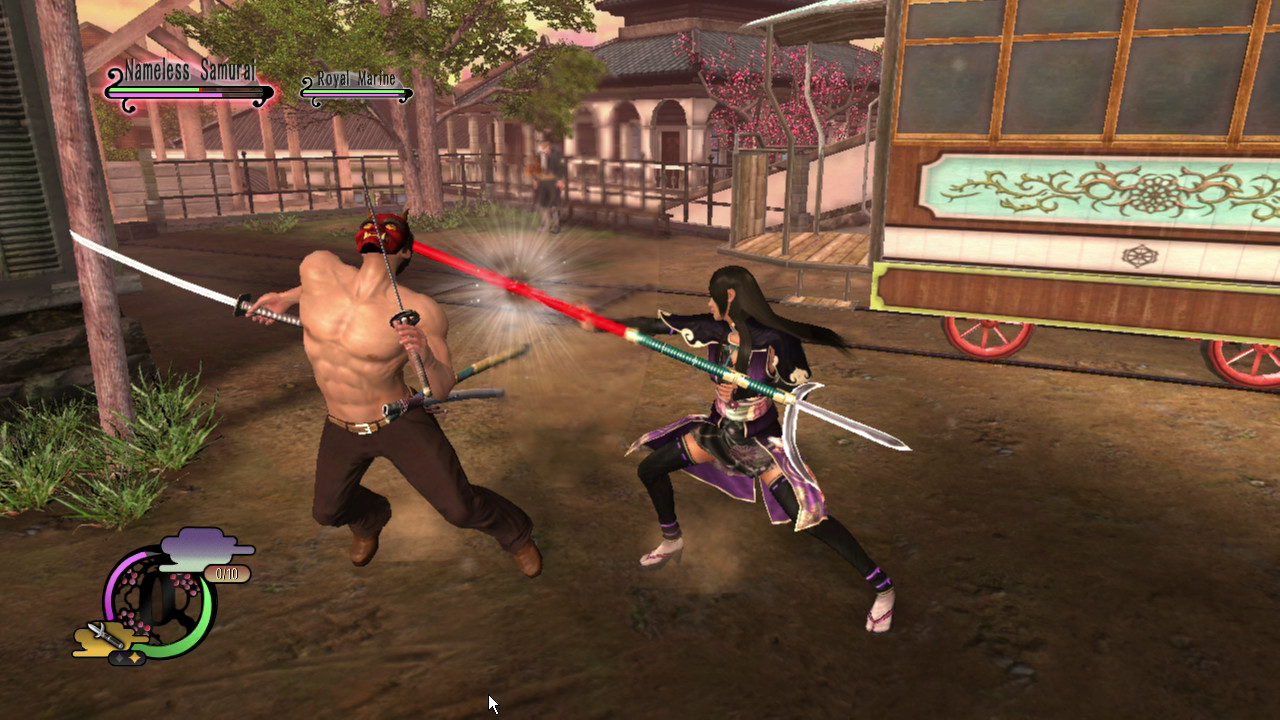 The wooden horse itself is not a very pleasant torture device, being a torture device and all, but adding spikes on it was just cruel. This became a mini-game of sorts as you had to balance yourself under the torturer’s whip but also stay above the horse. Eventually flames were turned on, she would lash out with a kick and then I figured “alright” I’ll pass out when my health drops to zero. Oh no. I died. Again. What is this Dark Souls? Alright, back to the boat! Time to start again…

For all the interesting systems that Way of the Samurai 4 has in place it also has a few smaller issues. One of the ones that actually annoyed me a bit more than I thought it would was that the voices and the movement of the mouths never really seemed to match up. Now if this was a case of an original Japanese game and English voices then that is something that most of us are so used to that we think nothing of it. In this case however we have a Japanese game with Japanese voices and it was honestly rather distracting as that just about never happens.

While exploring the town it could feel at times that things weren’t exactly where they were “meant” to be. Running around I would be hitting into other people and making them mad for “not watching where I was going” even if it looked like there was more than enough space between us. The same would happen when taking just a single step too far when trying to simply talk and they would be bouncing back as if I was a 500 pound sumo wrestler that was on his way to breakfast and they were between me and food. Once or twice was fine, but having to almost use a snail’s pace to talk to someone could get a bit annoying and drop the pace while running around trying to take care of a few things before the time of day moved on possibly making you miss you opportunity to perform a side quest until the next day.

Way of the Samurai 4 is a crazy entry that doesn’t take itself serious based while still keeping itself based on a particular era of Japanese history after the British came to call. If you want to be a the good guy, the bad guy, or the whatever guy, all of that is up to with however you feel at that moment in time. The replay value is huge, with a lot of events that can only be seen if you manage to live long enough to see the results of your decisions. In certain cases… that won’t be long.