Magic: The Gathering and I go back a long ways, so I leap at almost every chance to play a new iteration of the collectable card game whenever I can. Having played every one of the yearly iterations of Duels of the Planeswalkers, I held out hopes that Magic Duels: Origins would get things right this time. Unfortunately it is a case of one step forward and two steps back that makes this a middling release that failed to keep my attention. 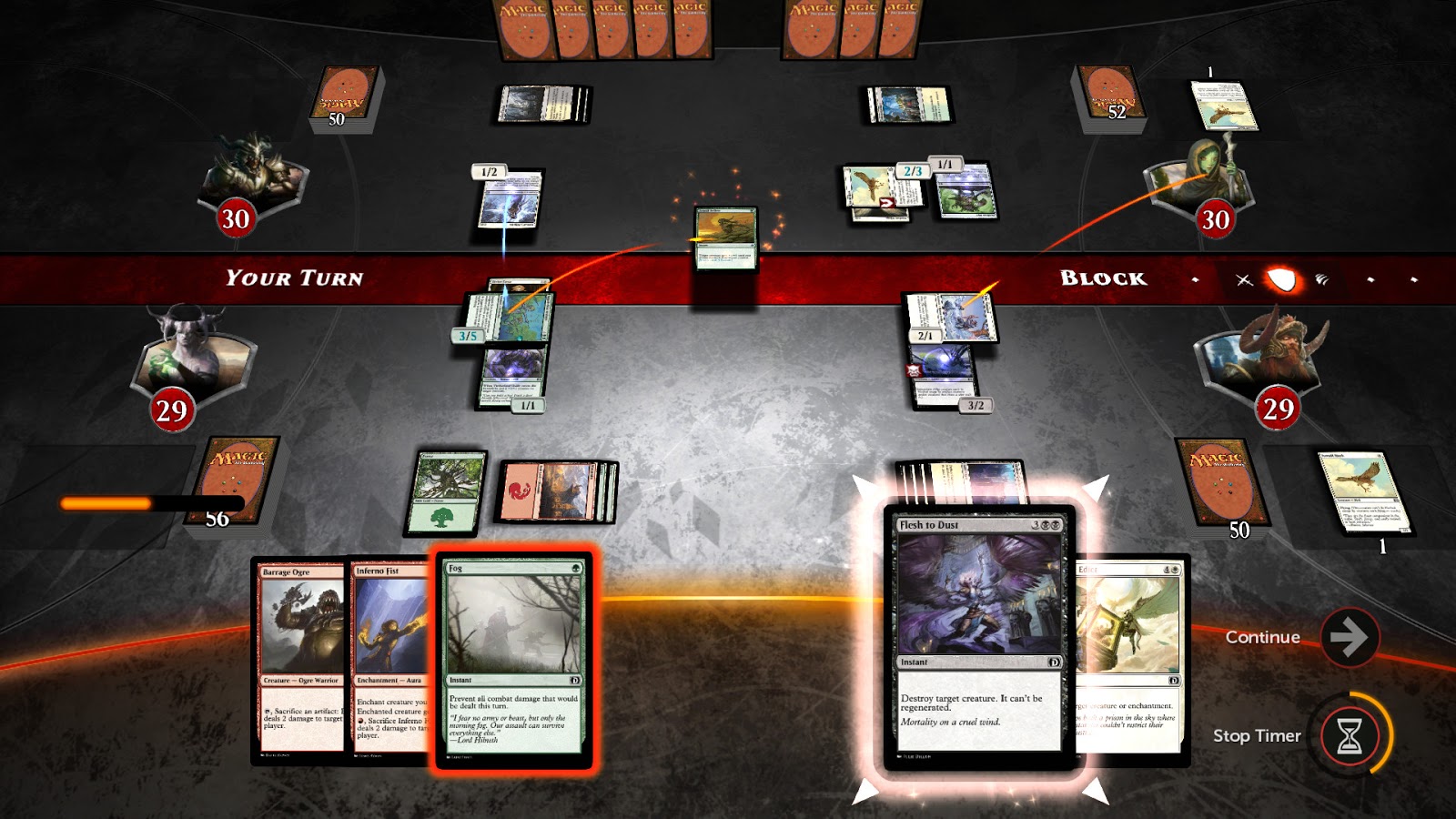 The game gets off to a good start, capturing my interest with its storyline. The tutorials were a bit much as I know my way around these games already, but I wanted to make sure there were no new mechanics I was going to get surprised by. Before long I was delving into the first campaign. Each campaign revolves around a well-known Planeswalker such as Liliana or Jace. Each one steps you through more difficult battles, giving you a pre-configured deck that grows more powerful at each stage.

I have said in the past that these video games are the best way to learn Magic: The Gathering, and that is as true as ever with this release. The tutorials are better than ever, not only telling you about mechanics, but giving you an opportunity to play them out in tutorial quick matches. This is how my son learned how to play, and now my youngest daughter is as well. If nothing else this is an outstanding teaching aid.

The story campaigns are actually fairly interesting, giving us backgrounds for these famous Planeswalkers who up until now were fairly mysterious entities. While none of these will amount to fantastic storytelling, I still enjoyed going back through and seeing it. The animated movies bookending these campaigns has a cartoon quality reminiscent of the cards and while it is fairly simple stuff, it gets the job done. 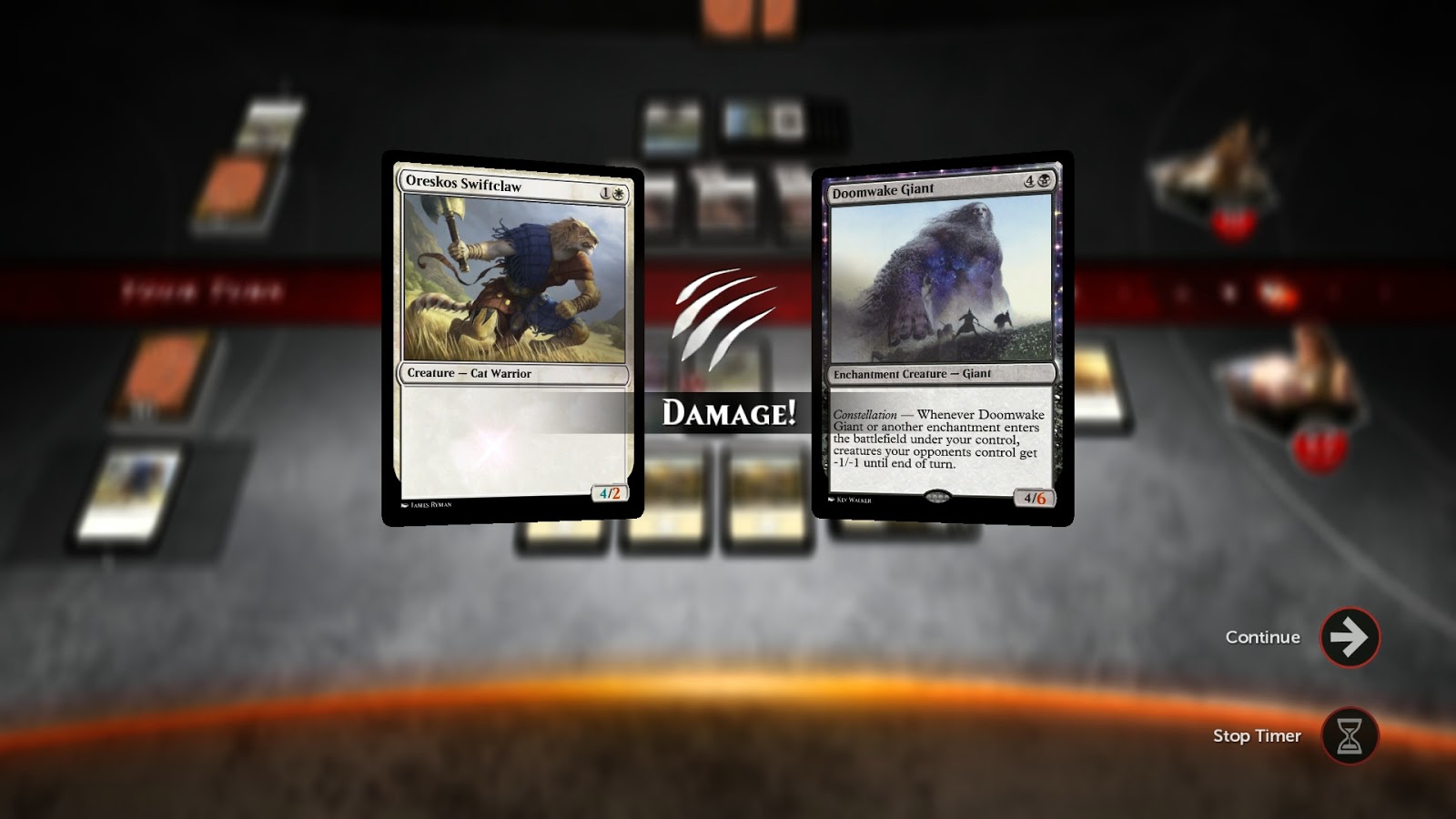 However, upon beating the story modes (something I was able to do in a single night in a single sitting for each of the characters), things start to thin out a bit. Gone are most of the bonus modes or types – you simply have two-headed giant. This is a fun mode, but it does not reward any coins – a dubious design choice that I will delve into later. You can also play matches against AI opponents of three different difficulties. Each difficulty rewards an increasing number of coins. You can also play online ranked matches, which unfortunately are a bit sketchy at the moment. Some matches disconnected for no apparent reason, which was a bummer because I had to finish out my match against an AI opponent to collect my coins.

Of course playing online comes with another issue, but that is that the community is built around Pay to Win. Any collectable card game is honestly built around this reality. If you want to be better at physical Magic: The Gathering – you’re going to have to plunk down cash for more booster packs and boxes. It has always been this way, and it likely will always be this way, just as it is with plenty of other physical card games of this nature. So while some people are up in arms about this in the video game version, it is a free-to-play game that offers you the ability to buy digital packs. Am I recommending that you run out and drop a bunch of hard earned cash on virtual packs? That’s for you to decide, but those players complaining that Magic Duels: Origins is Play to Win are absolutely correct – and I don’t know why they would expect anything different. 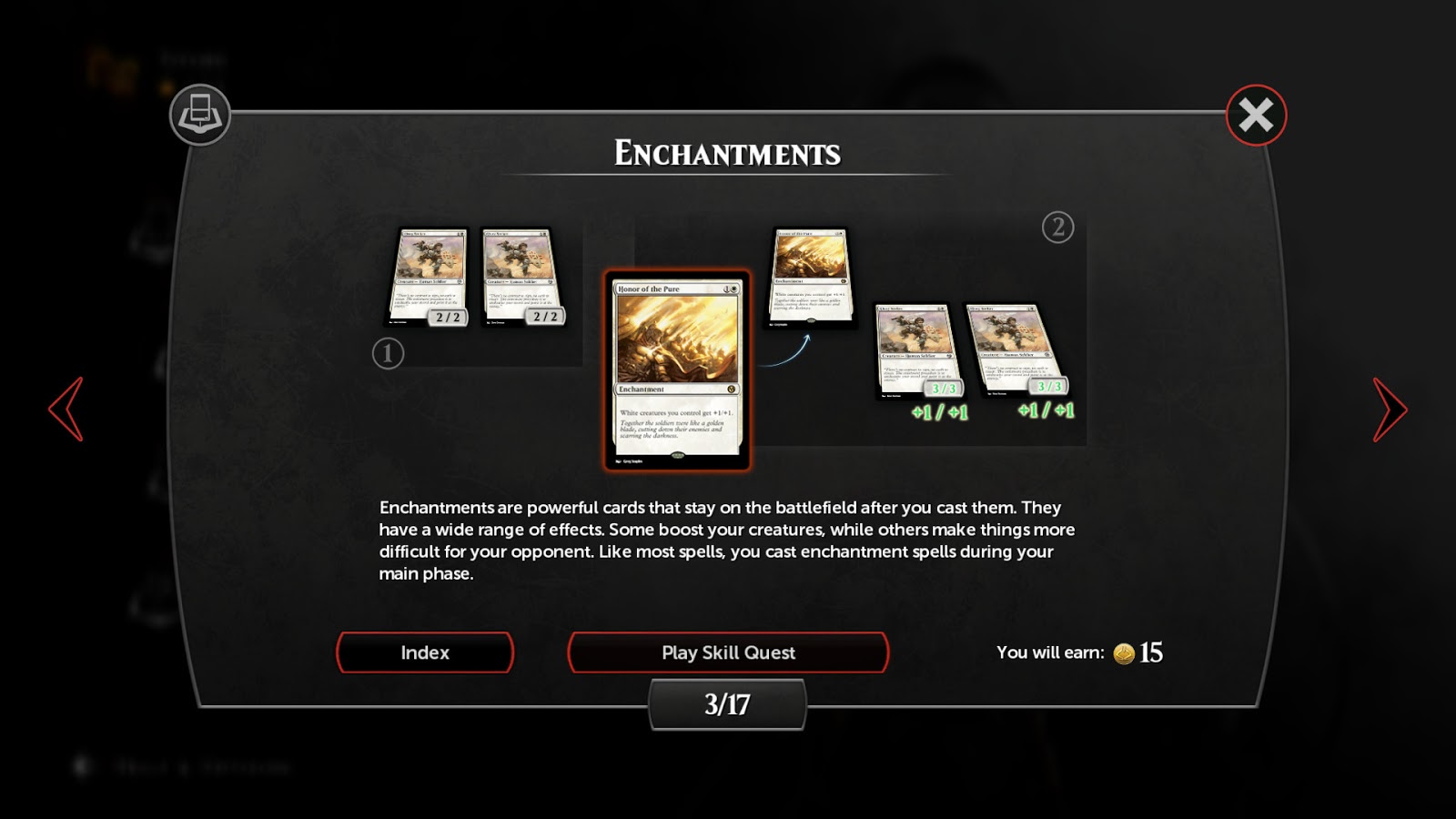 Probably the most fun to be had here is in playing real life friends in the game, right? It is, but then you realize that like Two Headed Giant – you do not get coins for your games. I suppose this is to keep people from… I don’t know, gaming the system to earn more coins or something? To me that feels poorly thought out, since aside from your starter box and a few packs of cards you get from being the first campaign, all of your booster packs are purchased through coins. Each stage of the different campaigns offers an increasing coin value, but upon beating a stage it rewards nothing else. Each day there is a daily quest you can complete for some coins. Other than that, you need to play the AI opponents or hop online in ranked matches and hope the server cooperates. This makes the first few booster packs fairly easy to come by (my first 1,000 total coins came pretty fast – in about a day or so of playing). The rest is a much slower pace (1,000 coins took about a week of heavily playing after that). Considering a pack of boosters is going to run you 300 coins, it can be a slow grind to build up your card inventory.

Of course, this is where Wizards of the Coast is hoping to recoup money that goes into the development costs of the game. This is free-to-play, and with last year’s Planeswalkers 2015, a lot of people groused over having to pay even the nominal $10 for a game that was so heavily slanted towards microtransactions, so this was a natural direction to take the game. I really do not like plunking money down for virtual cards (I’d much rather buy the real thing and make my decks), but at no point does this game make their intentions unknown. In all of the menus there is a quick and handy button to take you right to the store. In there you can spend your coins on packs – or spend real money on more coins for more packs. 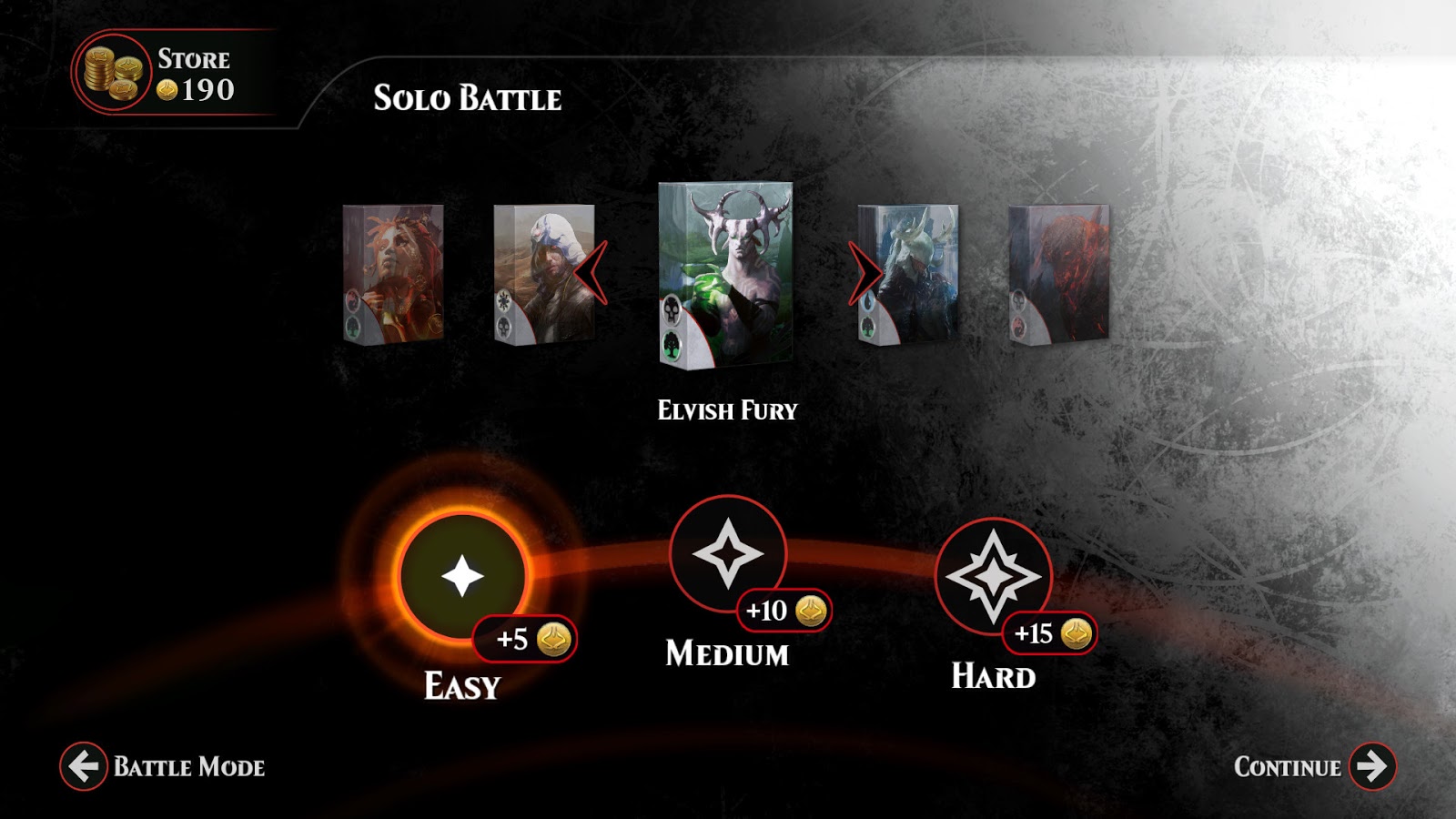 Magic Duels: Origins benefits from the strides made in the engine over the last couple of years, especially in both the user interface and the deck building component. Building a deck is actually quite easy, with a wizard that can walk you through the process or you can choose to completely assemble it manually. The flexibility that can be had here is impressive, but even using the wizard helped me to assemble a solid deck quite quickly.

The downside is that the current card pool really is not all that impressive. It is currently missing some of my favorite mechanics, does not have a lot of the most popular cards and frankly is not that large of a set in terms of sheer volume. This, combined with the relatively sparse options (no other modes other than those described, no way to stage 3 on 3 or 4 on 4 or free-for-all matches, no lobby) make Magic Duels: Origins feel like a solid foundation that is still missing some of the walls and roof that would complete the house.

Magic Duels: Origins gets several things right, but it trips over its own feet at regular intervals as well. For my money Magic: The Gathering is still my favorite CCG out there, but this version of it could be better. There is still plenty of room for the game to grow and server stability could be improved, but I suspect the grinding nature of the game will persist no matter what, and that takes some of the fun out of the experience in the end.