Ah, the memories. Walking through a multi-floor parking lot, being attacked by vicious bikers, air-kicking them onto the floor and bashing their heads with a sledgehammer. Those were the days… 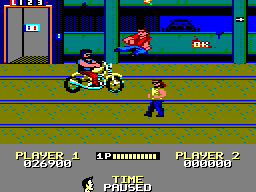 “Target: Renegade” is a pure beat’em up, where you control an one-man army, reminding of Van Damme movies of the eighties. After the first stage you visit a district of ill repute, populated by scantily clad prostitutes who assault you with chains, a park and another bad neighborhood, where even dogs want to kill you. The final confrontation takes place in a club, with well-dressed bouncers carrying pool sticks.
If you defeat them the last obstacle is the big boss himself, who has kidnapped your girlfriend. Yes, all this massacre happens for the eyes of a woman, much like in Double Dragon or… Homer’s Iliad. Haha, I can’t believe I actually wrote that.

I completed “Target: Renegade” more times than any other game on the Amstrad. I cannot describe the simple joy of stunning someone with a backwards kick, grabbing and knee-hitting him in the groin, then punching his face while he is lying helpless on the ground until a small puddle of blood appears under his head. Yes, this game is brutal and I loved it for that. It required a considerable amount of skill as well, since enemies try to surround you and use weapons to knock you down more easily. So, you need to be quick and tactical. 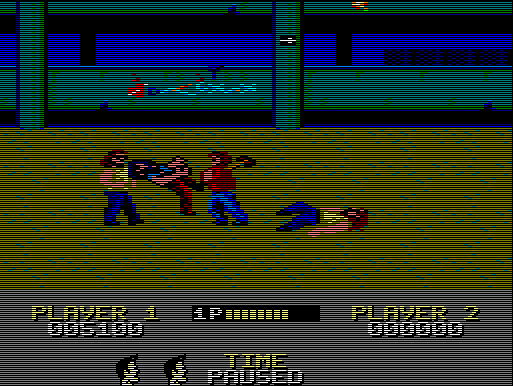 Thankfully, the controls are responsive and intuitive and all moves are useful. For example, the air-kick is good for knocking someone down immediately· to perform it you press up and the joystick button simultaneously. The keyboard can be used too and it works fine. In fact, this is one of the very few Amstrad games with a real two-player mode, so the keyboard is necessary for the second player.

The graphics are not detailed but they are adequate. Like many other games on this system there is no scrolling but this doesn’t cause any unforeseen hits when the screen is “flipped”. The sprites move fluidly and the animation of your character is good, whether he jumps, punches or swings a club.

The sound effects are satisfying (for Amstrad standards) and the unusual tone of the music, which changes in every stage, creates a gloomy mood you don’t expect in a beat’em up. 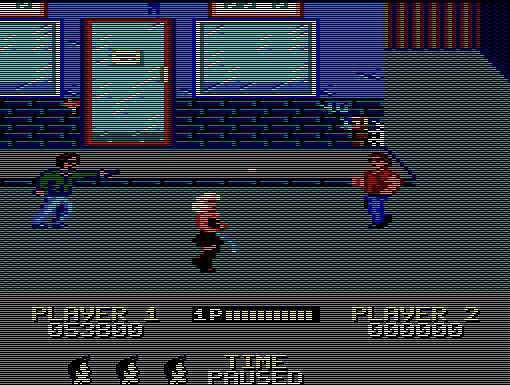 The difficulty is perfectly balanced. The more you play the better you handle your character and adjust to harder conditions. For example, the brick is handled differently than melee weapons and later you face enemies who duck when you jump-kick. There are only two things missing, bosses (except for the final) and an ending. It’s a shame that you don’t get to see anything for your troubles, instead the game starts from the beginning again. A picture of the brave fighter and his girlfriend happily reunited would be most appropriate.

“Target: Renegade” belongs to another era of gaming, with no tutorials, complex scripts or intricate controls. It was just you, your fists and many unlucky dudes waiting to be pulverized. It is my favorite Amstrad game along with “Batman the movie” and I remember it fondly. 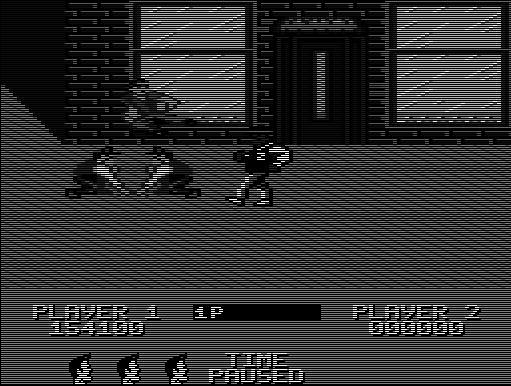