I have been a big fan of the Zen Pinball tables pretty much since they rolled out last console generation. I played the FX variety on Xbox, but have spent most of my time with the series on the PlayStation platforms. I love that they are cross-buy, and I think that the Marvel property has been their best deal to date. While I love some of the other tables such as Street Fighter, Ninja Gaiden and the Star Wars ones, the Marvel tables have allowed the development team the most freedom so far. 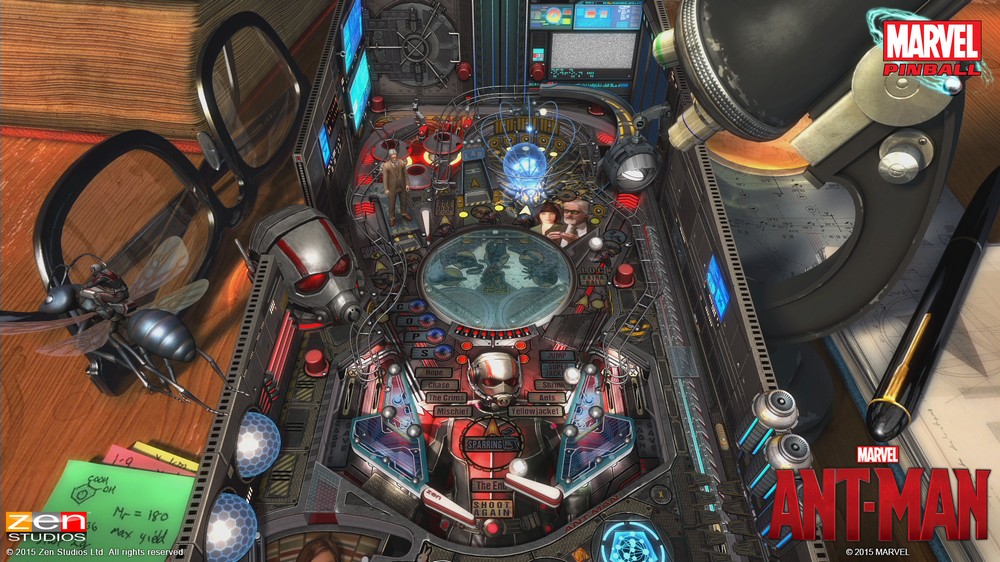 I enjoyed the Ant Man movie. Say what you will about some of the pacing in the stretch run, but it reminded me of the original Iron Man, which is arguably my favorite of the Marvel movies (with the two Captain America titles hanging right there with it). Ant Man does not quite live up to those three in my mind, but with its focus on technology, smaller (pun intended) stakes and so much focus on a suit – it really reminded me of Iron Man for several reasons.

So I was excited to give the pinball table a shot. I was quite happy with the overall result. Less repetitive voice acting than some of the prior tables, pleasant music and visually colorful, entertaining graphics make the presentation around Ant Man a solid one. What is better is the detail that goes into the table itself. Zen Pinball is a wonderful hybrid of physical tables and the video game platform. You simply cannot do everything on some of these tables with a real life pinball table. It fuses graphics with realistic pinball physics to create an addicting experience for pinball fans such as myself. 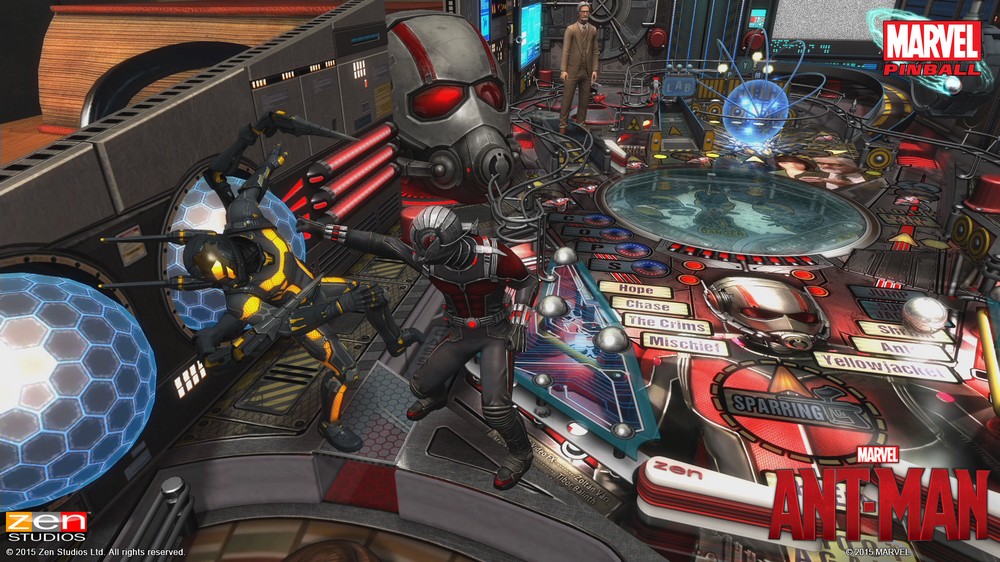 Things start off quickly, almost a little overwhelmingly in truth. The first round or two with a table is all about learning what shots work and which ones will cost you a ball. Once you put a bit of time in, you start to understand where the points come from, and you can plan your shots accordingly. While I enjoy the video game elements in the Zen Pinball tables, they can be jarring at first, and that was the case here as well. In fact my first match ended with a title because I was unsure what was going on when I was firing off some electronic pulses (you will see this in the video at the bottom). I hit several buttons, including jostling the analog stick, and my match came to an end.

However, my second match went far better. One of the most entertaining aspects to these tables is trying to beat the scores of a friend or family member. I remember spending way too many hours about a year and a half ago trying to (and finally succeeding) best my father’s score on the Fantastic Four table. One of my online friends Matt tends to pick up every table, and even plays them before I do. I love that – it gives me something to gun for. In my second match, I was able to best his score (the pinball is in your court now, I suppose, good sir).


Exploring the tables, triggering the events and competing with friend is what the Zen Pinball series is all about, and the Ant Man table does its job admirably. Once you learn your way around the table, there are some fun combinations to pull off. As always, my personal favorite is unlocking some small mini game or episode within the table. Appropriately these are themed in such a way that they emphasize the shrinking ability of our hero.

ZEN Pinball 2: Ant-Man Pinball is yet another great use of the Marvel license that does not chart any new territory, but generally does things quite well – once you get used to the table. I admit that the ball seemed to push to the sides a bit more than I cared for, and the table throws an awful lot at you right out of the gates, but upon settling in, this proved to be one of the better Marvel tables to date.