If you’re anything like us at CGR, then you’ve probably spent hours with your friends, within the unbreachable walls of a pillow fort, formulating a hypothetical battle plan for reclaiming your living room (and eventually the world) in the event of a zombie apocalypse. Maybe your plan, like mine, includes fashioning a bandanna out of sausage links, tearing your shirt off in a slow-motion panic – as though it were armor splashed with acidic alien blood – and employing Johnny Cage-esque low-blows to every zombie that galumphs into your macho posturing. Because you, like me, hypothesized during your childhood that, to the undead, groin-shots are just as lethal as headshots. 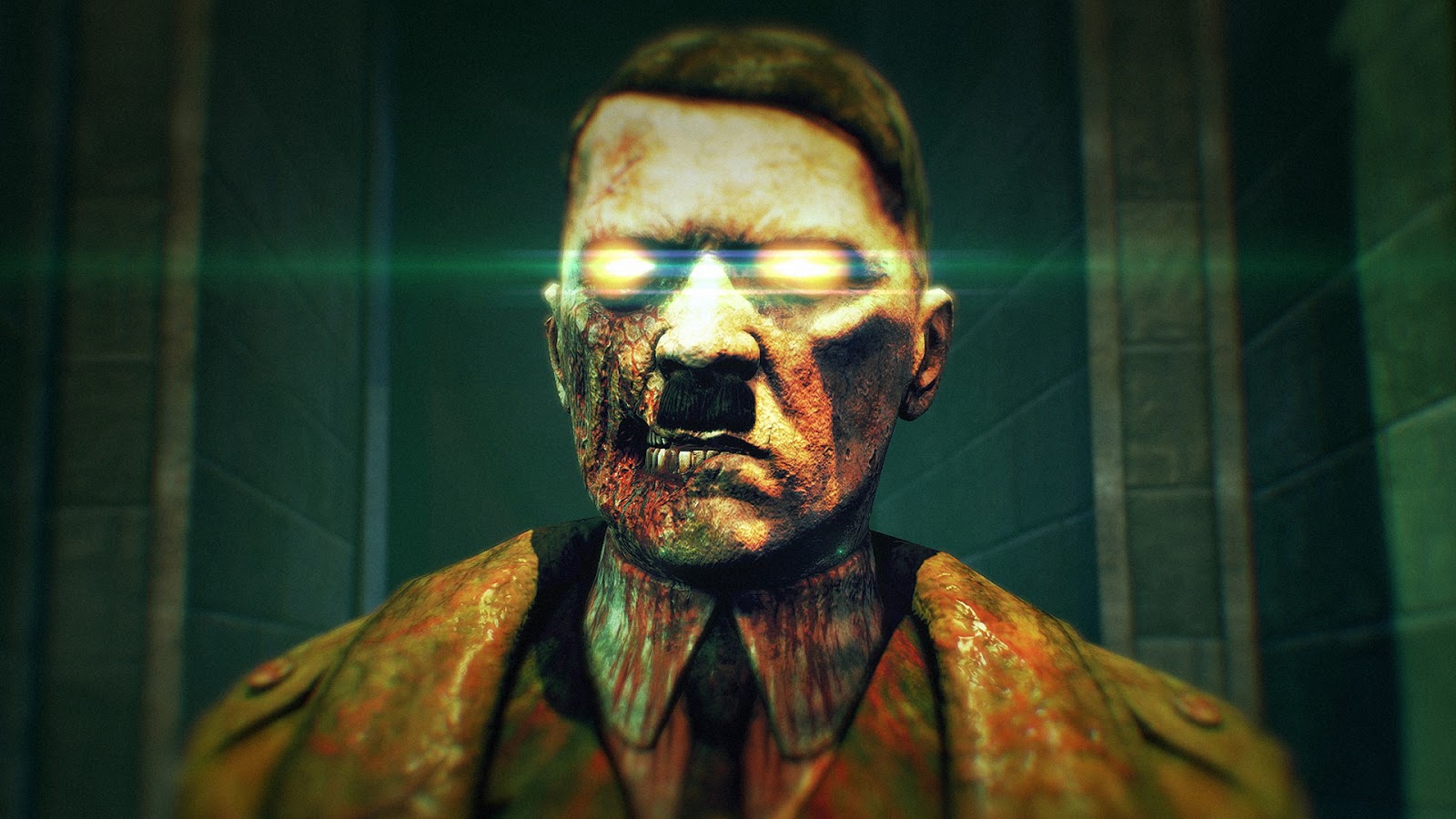 Although I’m confident that this plan would have a 100% success rate, after playing Zombie Army Trilogy, I’ve amended my hypothetical approach to decimating the undead. While a multiplicity of melee attacks to a reanimated groin may be instinctive and good for a giggle, the safest and most efficient way to dispose of waves of ragged brain-munchers is with three friends, all armed to the loins with grenades and sniper rifles, blasting gluttonous heads from a distance. You, too, will enjoy adopting this tactic in Zombie Army Trilogy if zombies, an 80’s WWII exploitation horror vibe, and precision sniper mechanics gifted with four player co-op gets your survival instinct growling for a ballistic fight.

It’s a dark night in Berlin. Buildings lay crumbled, confused as to why they were meticulously created only to be demolished by tank fire. Bodies lay in scattered piles large enough to stifle the concept of decomposition. Hitler, sequestered in his war bunker along with his generals, is on the verge of losing the war. So rather than shaving his iconic mustache and ducking out of Berlin so as to escape death or capture, or consuming a cyanide capsule and taking his own life with a pistol as history demands, he slams his fist on the table and initiates Plan Z, a scheme that, at first, inexplicably raises the fallen Nazi Army and curses them with an addiction to aromatic human flesh. 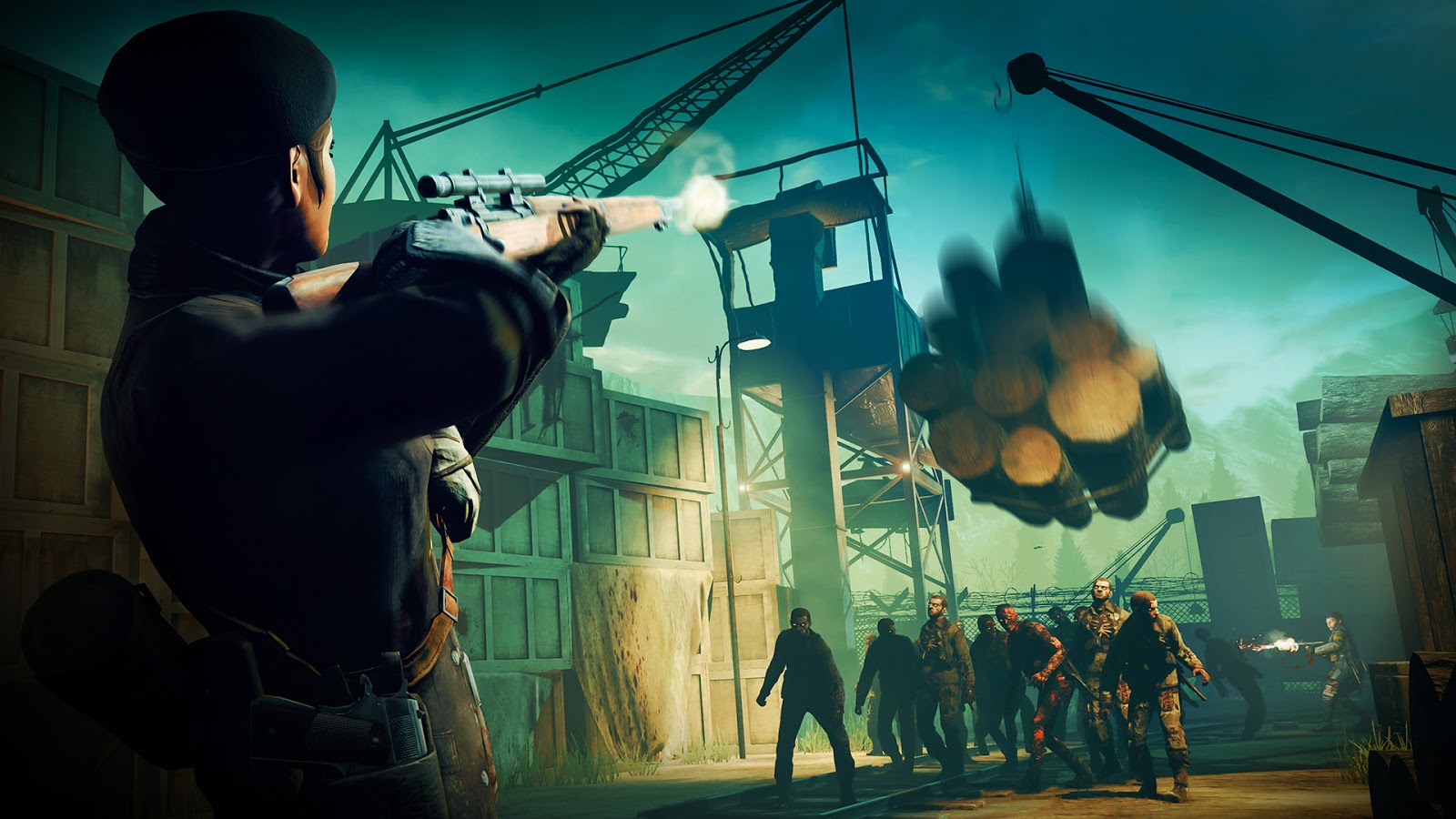 This is where you come in, as one of eight soldiers of male or female persuasion, with the sole suicide mission of destroying the zombie outbreak at its source and knocking the blinkin’ block off every zombie that gets in your way with a collection of sniper rifles, secondary guns (which include a variety of machine guns and shotguns), sidearms, and an assortment of explosives. But, not surprising since the first two episodes in the game were standalone expansions of Sniper Elite V2, proficiency with the sniper rifle is the focus and of utmost importance.

As a third-person arcade shooter, you travel in a linear path from ambush to ambush, dismembering the undead in a thrilled panic before they have the chance to overwhelm your position. And while you can stand your ground with a machinegun, pumping round after round into a collection of foes that continuously creep for a taste of your brain, effectively keeping the horde moaning beyond arm’s reach, said machinegun can be pretty inconsistent when it comes to killing the zombies accurately and maintaining your point multiplier. And so, ZAT recommends that you adapt and alternate strategies: engage from a distance by default; engage up close and personally only when necessary. 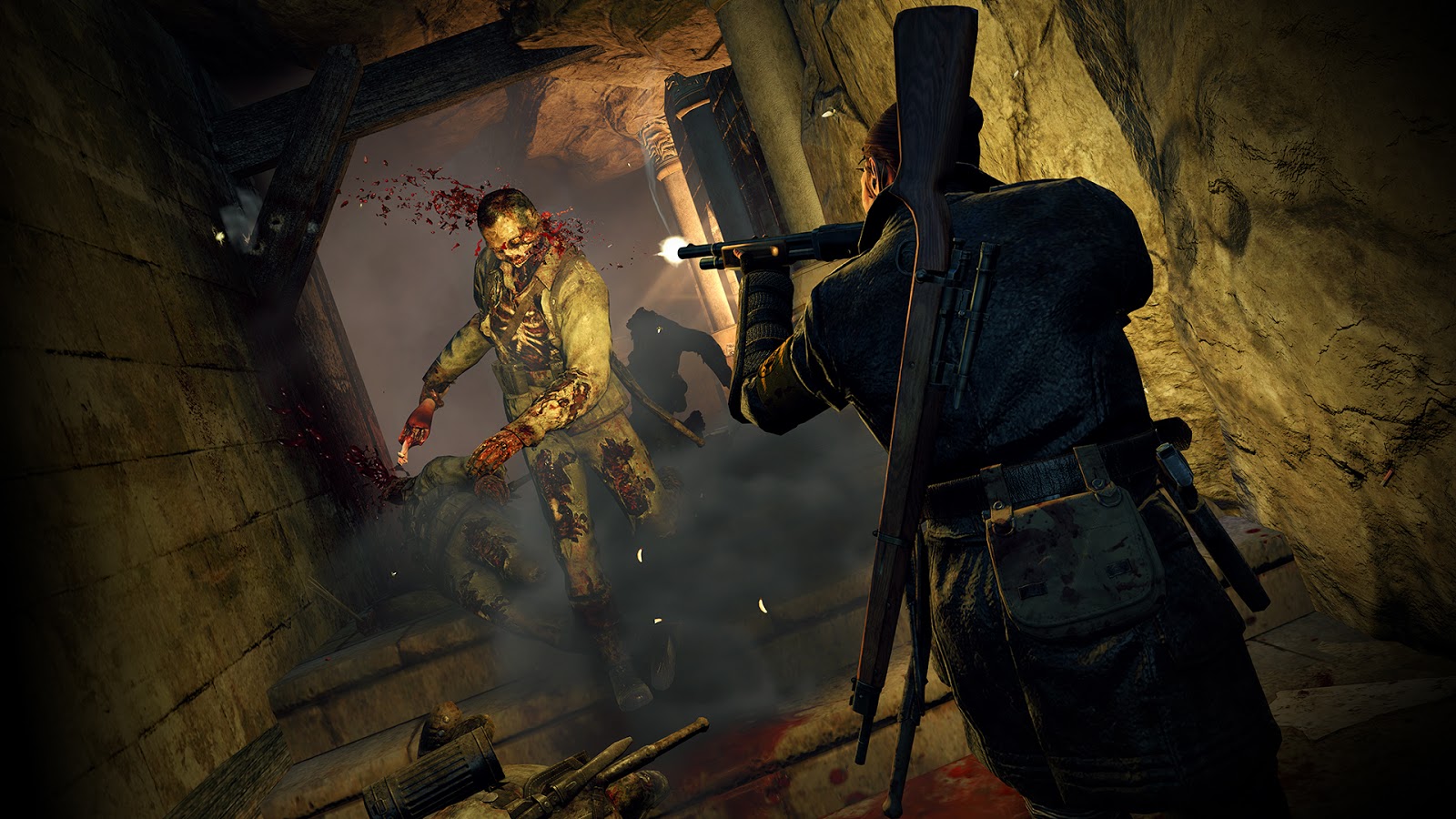 ZAT insists on these recommendations by enforcing the aforementioned point multiplier: Headshots, shotgun blasts, and explosives generate the most points and ensure that your combo will be maintained through accuracy, meaning that it can be best to find a relatively safe position, lay traps – mines, explosive trip wires, and dynamite — between you and the zombie horde, and surgically dispose of the each threat one-by-one by sniper fire. An ability called Focus aids this endeavor by slightly slowing time and materializing a red diamond in the center of the reticule that takes into account variables such as gravity and wind speed, factors that only seem detrimental on the hardest difficulty, with conservative use of Focus Time. Of course, running-and-gunning is just as fun and very often unavoidable, especially when you have three comrades squealing “Zombie Slumber Party!” while lobbing grenades at the boots of every foe in your crosshairs; however, the focus on maintaining and striking from a distance is what makes ZAT feel like a unique experience compared to other zombie shooters of its ilk.

While not the most detailed corpse howling to be put out of its misery, ZAT’s visuals invoke a sense of dread and hilarity that perfectly captures its slightly-above B-grade ambitions. That dread comes mostly from the atmosphere produced by the dark streets, factories, and bunkers of Berlin, as well as the sinister sound design that creates the illusion of zombie omnipresence; also, the music, with its pronounced synth chords, adds urgency and purpose to every fray. I’d be surprised and probably zombie bait if I discovered that John Carpenter’s 70’s and 80’s films’ orchestrations were not influential on the soundtrack. The hilarity, on the other hand, comes mostly from your protagonist’s melee animation, a front kick stiff enough to unhinge a welded submarine hatch. I dare you to perform it without smiling and saying, “I feel damn good about this, man.” 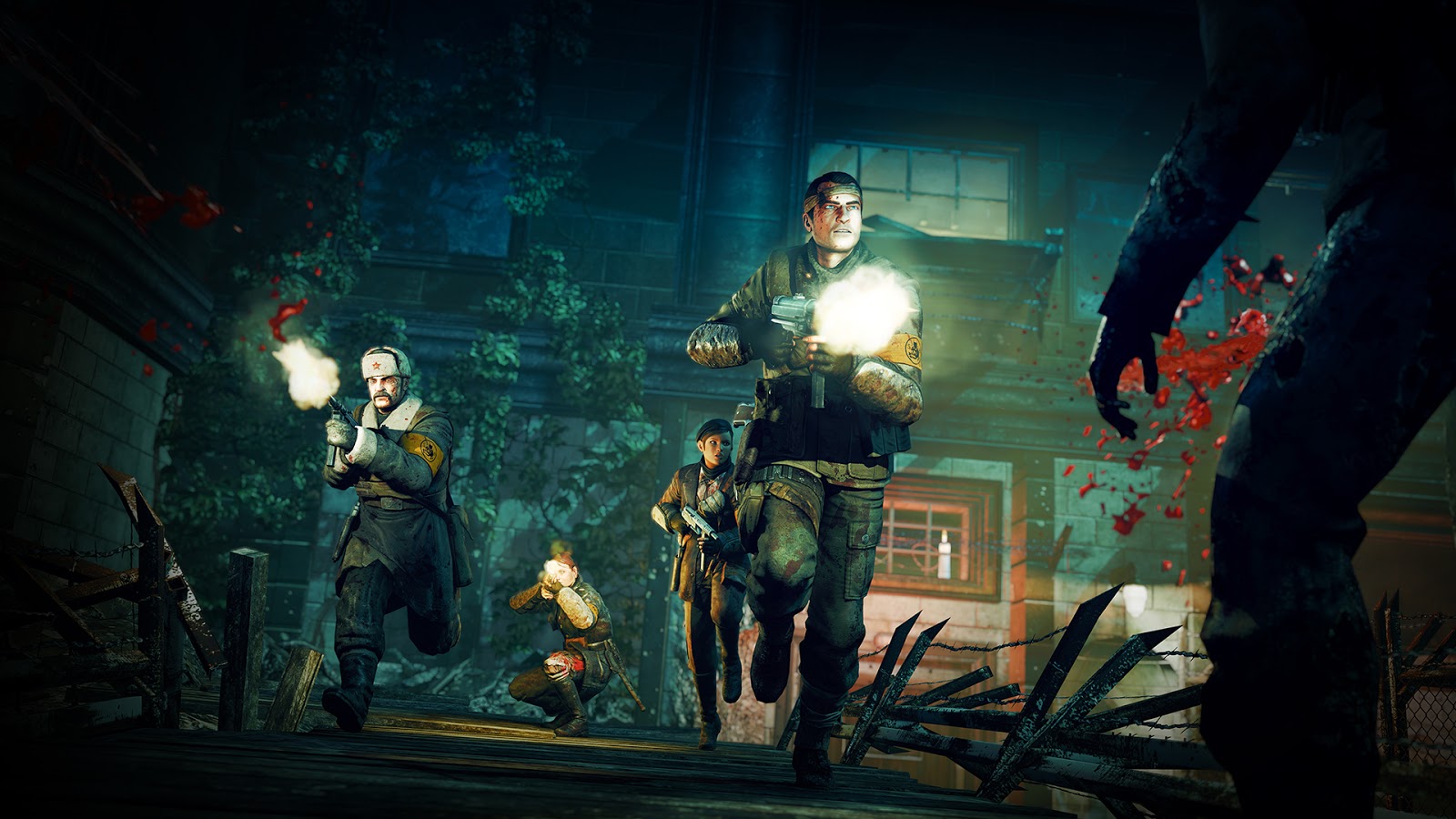 For a shooter of this kind, tedium can potentially become your greatest enemy. There were two moments, one from the first episode and one from the second, where the game launched three waves too many at my painter-turned-freedom-fighter, muddling my enjoyment just a tad. Is this right? Is this a glitch? Did a spank a zombie’s fiancée during its former life? WHY WON’T THEY STOP COMING?! Naturally, once it was over three waves later, I felt accomplished and continued on, wiping the congealed blood from my jacket sleeve. Yet, a few of these encounters could have been toned down in terms of wave number for the sake of pacing.

Another issue, the answer to which could’ve lessened some potential tedium by promoting more incentive for replay, is the lack perks and unlockables. The point system I discussed prior exists only as a competitive marker, to gauge which of the four players is annihilating zombies the most effectively, when it could’ve been utilized as currency to purchase new guns, weapon parts, outfits, skills – et cetera.  I mean, I appreciate the simplicity and purity of ZAT’s gameplay, as a straightforward co-op arcade shooter, but I would’ve loved to have seen what sort of ideas the developer could’ve formulated when it came to modifications and such. As it is, gamers will have to rely on the strength of the gameplay loop and the availability of online camaraderie to ensure that ZAT has longevity beyond the Horde Mode and 18 hour campaign.

You have plenty of zombie slaying games to choose from. There’s no doubt about that. Between Dying Light and Call of Duty, you can slice, kick, and flame-throw anything that grunts with a tinge of menace. ZAT is a bit different. It wants you to distance yourself from the chaos, to exhale slowly and stop your breath for a moment as you squeeze the trigger, unloosing a single round and observing in slow motion as it crashes through your enemy’s cerebellum. For that, I think ZAT is worth it. For fans of zombies and the hysterics of co-op mischief, it’s totally worth it.