comments Share
You are reading
It Follows – Movie Review

I am not a fan of slasher movies and haven’t watched the “Exorcist” either; I am in favor of “light” horror, for example “The Conjuring”. “It follows” doesn’t fall in either of these sub-genres because, though it lacks blood and gore, it emits creepiness until the last shot.

The movie starts with a young woman running away from her home terrified, as if someone, or something, is chasing her. The direction and music create an ominous atmosphere of impending doom and I was eager to see what follows (excuse the pun). The first act is original and exciting, as the main character, Jay, meets an attractive young man, not suspecting that having sex with him will bring her in the same desperate situation as the aforementioned girl.

Someone in imdb wrote that “It follows” is like Babaduk and I agree, to some extent: they both rely on an atmosphere of claustrophobia instead of plot development and solving mysteries (1), they have an undefined evil which targets inexplicably a heroine who gradually loses her mind and their ending is unclear (2).  Thankfully, “It follows” is much more interesting. The idea of an evil that comes closer with every passing minute until it grabs you in its clutches, the realistic performance of Maika Monroe and the unusual music with its occasional crescendos grabbed my attention.

The presentation is the movie’s best aspect, especially the way the camera moves slowly to reveal another portion of the scenery, the use of yellow lights in the night and the absence of sun. It makes you think the demon may be anywhere, behind the fence while Jay is relaxing in her pool or in the hall outside her room. The only thing I didn’t like was some unnecessary nudity intending to provide cheap shock.

The movie has a characteristic that is common in the horror genre, connecting sex with murder, maybe because it is intriguing to connect two opposites or simply because of influences from puritanism. However, it can also be interpreted as an allegory about the agony people feel when they keep changing sexual partners without forming a deep relationship, failing to know who the other person truly is, thus they end up being chased by loneliness for all their lives (3).

“It Follows” will disappoint you if you expect a big mystery, bloody violence or classic horror. It is relatively slow and its villain is weak compared to the supernatural threats of other movies. Nevertheless, it made me be afraid the main character could have a terrible fate until the credits started rolling and that’s what I want from a thriller. 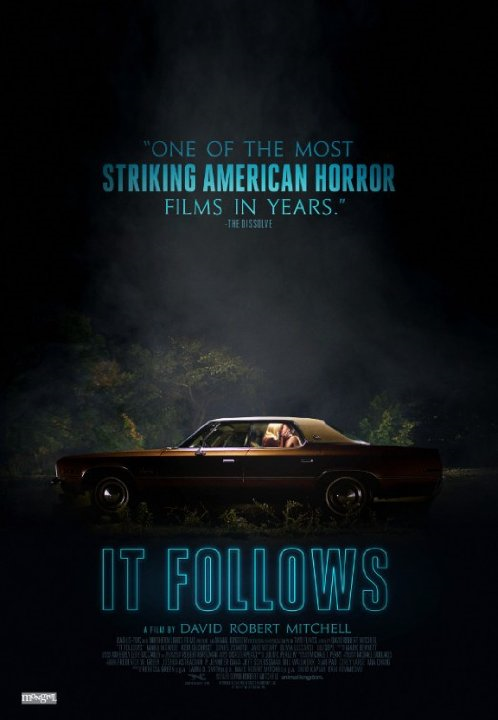 (1) First, the story gets repetitive after some time: Jay sees the demon is near, she runs away scared, stops to get some rest, then the same happens again. Second, all the effort to locate Hugh leads nowhere. Third, it’s illogical that the kids never asked the help of their families, although maybe it’s meant to cause more tension and underline the fact that modern teenagers don’t communicate well with their parents.

(2) Did the demon die in the pool? In the last scene, do Jay and Paul believe they are safe? Is the person who follows them a normal human?

(3) Hugh was chased by the demon after having sex with a woman he met in a bar. Jay had sex with him without knowing him either. Paul, who thought he was in love with Jay, doesn’t come closer to her after they sleep together and his mood doesn’t become better.