comments Share
You are reading
Velocity 2X – Xbox One Review

Velocity 2X takes two distinctive styles of action game and mashes them together into an exciting title that has enough puzzle elements to make you think, enough collectibles to keep you exploring and more than enough action to keep you busy. 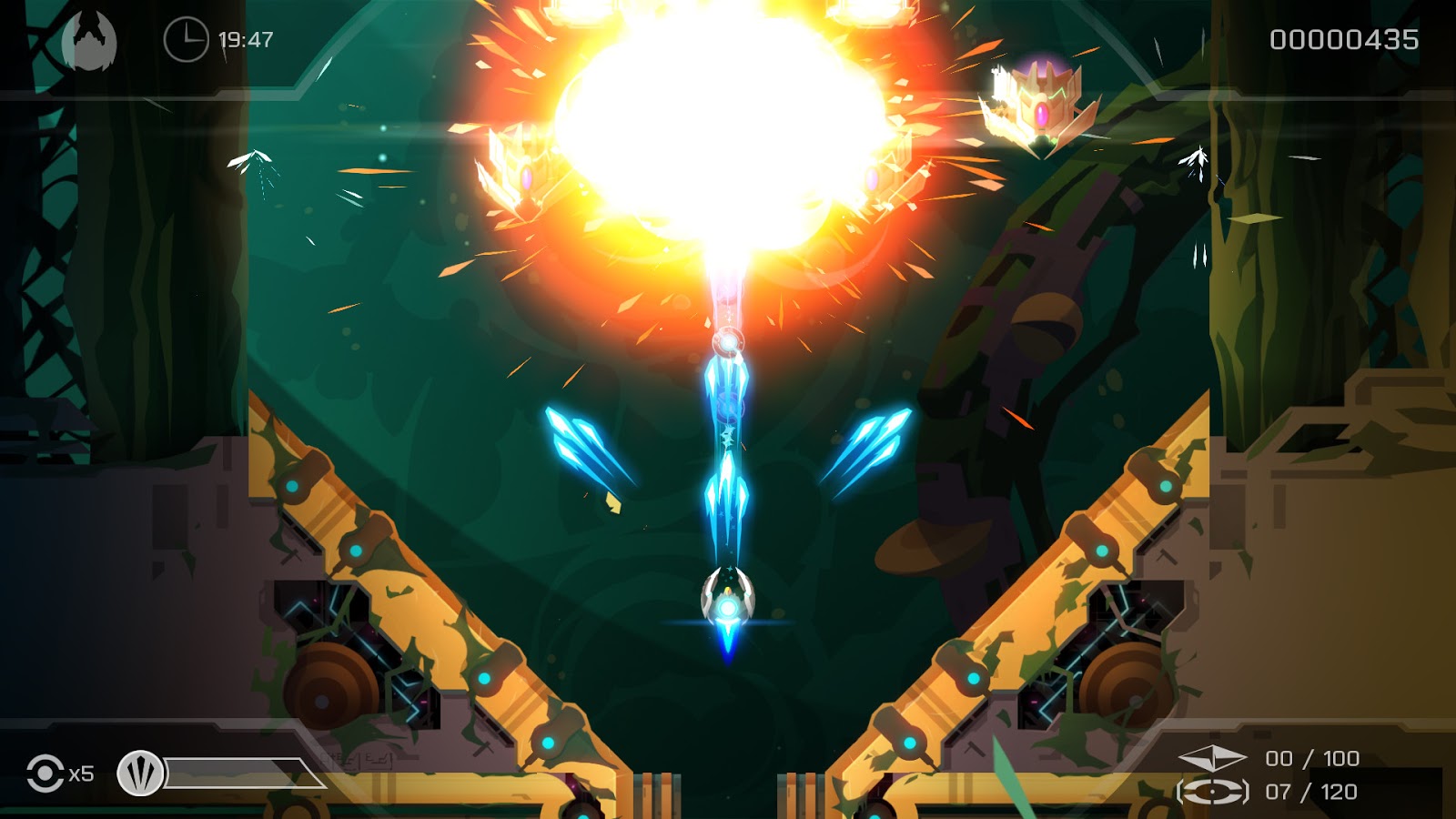 In some ways, Velocity 2X is a tale of two games. Both use similar mechanics where you blink around the screen, adding a layer of problem solving to the otherwise frantic action. You spend about half of your time as a ship, working upward through vertically scrolling environments as you look for opportunities to dock and move into larger structures on foot. There are plenty of things to shoot at in this mode, but easily the most challenging component is the ship’s ability to dart around the environment and teleporting through objects. Speed also becomes not only an asset but an enemy at the same time. There are instances where you must fly with precision through a series of narrow passages, and other times when you will undoubtedly get yourself into trouble if you are too hasty in your actions.

What really helps Velocity 2X to stand out however, is the way these overhead flight scenes are a bridge to the equally engaging action/platforming sequences. You run and shoot through passages, usually with an objective the leads to unlocking a gate that was barring your ship’s continued progress. However, there are plenty of nifty puzzle elements baked into the levels that provide you with collectables to search for as well. 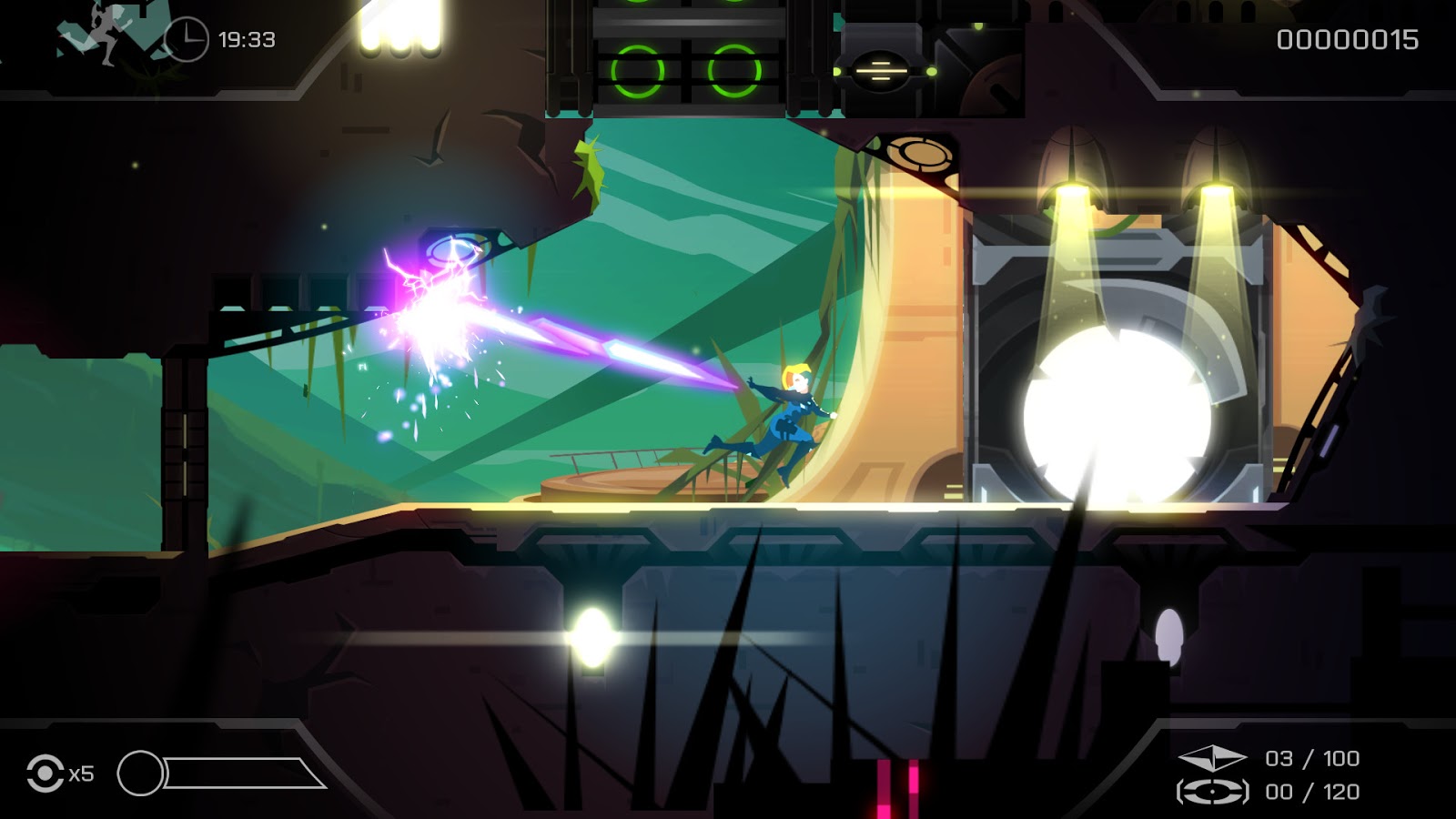 As if the gameplay itself was not interesting enough over its dozens of lovels, perfectionists will no doubt find it entertaining to go back through and try to get a 100% rating in a stage. Early on, these come pretty easily, but as the difficulty ramps up, these scores at the end of the stage are much stingier to acquire. Once you complete your objective in the 2D side scrolling portions, you then hop back out into space and propel your ship further forward.

The story is nothing to write home about, but it never irked me either. Really, I was in it for the action and somewhat light puzzle elements, and on that front Velocity certainly delivered. Skills and powers are part of an excellently paced difficulty curve, introducing new elements to keep the game fresh and a way to access areas that might have been previously unavailable for those who like to unlock everything. Combat is fast but never unfair. Velocity teaches you as you play, so that by the time a boss battle roles around, you have been equipped with the ability to win. It might not happen the first time (in fact, odds are it won’t), but with some patience these fights are manageable and often quite entertaining as they too manage to break up the pace.

In large part, I would say that pacing is the strongest suit to Velocity 2X. All of these different elements could have been fleshed out and made into a properly entertaining game, but with them blended together as expertly as they have been, they combine to create a game that is much greater than the sum of its parts. The action never really gets a chance to go stale, because the mode of play might change, or a new boss comes along, or perhaps you just acquired a new skill.

That being said, the story is not the only thing that holds Velocity 2X back from being a better game. While the pacing and level design are consistently great, there is not a great deal ‘new’ to be discovered here. The team at FuturLab certainly knows how to build a very good all around game, but in truth none of the mechanics are particularly fresh or original. This gets back to how the whole is better than its pieces, because odds are you have seen all of these skills, challenges and bosses in one form or another before. That is not to say that the lack of overall originality brings down the game, Velocity 2X is still a lot of fun, but there is room for improvement as well.

Velocity 2X is kind of like two good games that are blended together to create a great game. There is a lot of love and detail in the game’s design, and it is impressive the way all of these components are woven together to create a full experience. These components on their own could have been a bit more innovative, but on the whole Velocity 2X is good enough that these shortcomings are easy to overlook.