Admittedly, I was someone who felt let down by the original Blood Bowl when it came out. I thought its mix of dark humor, fantasy elements and football would really resonate with me, but for a variety of reasons that game fell flat for me. I have been guardedly optimistic that the team at Cyanide Studios would right the ship and make Blood Bowl 2 a more compelling experience. Thankfully my faith was rewarded. 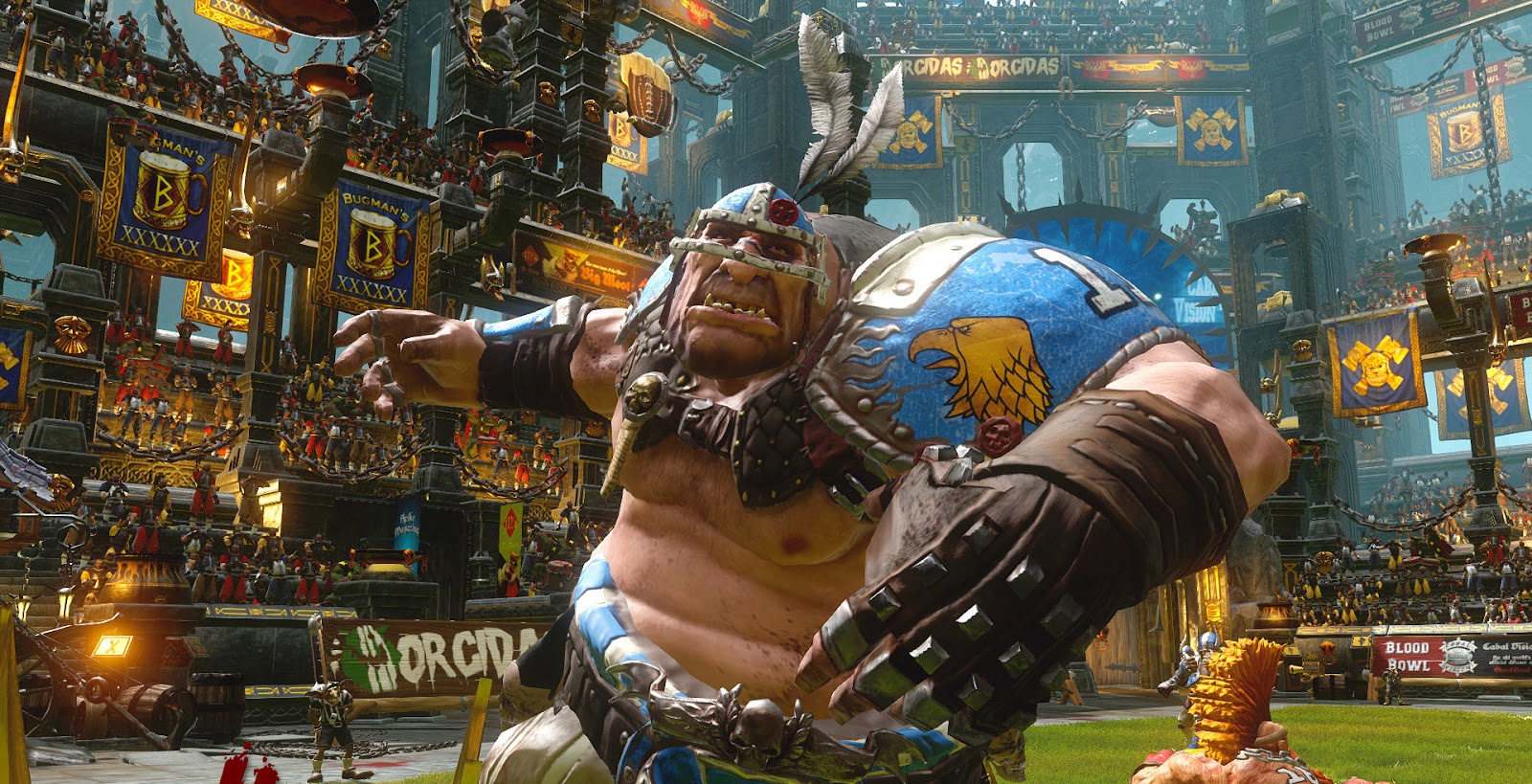 Right off of the bat this newest edition of the game makes a really good impression. The audio commentary is hilariously campy, the visuals are significantly improved over its predecessor and it does a better job than ever in teaching you the ropes.

For those unfamiliar with Blood Bowl, it is a football game set in the world of Warhammer, and this video game is based on the board game of the same name. Those looking for Mutant League Football (I love that old game) will come away severely disappointed. This is not an action game, but a very tactical one. Halves are made up of eight turns and each turn lets one team and then the other act. Some turns go by very quickly, others take a good deal more thought.

At the heart of the game is football. One player has the ball at all times, and teams score a point by getting said ball carried into the opposing end zone. There are fewer rules to contend with than real football, so there is a sort of simplicity to the action. Get the ball moved by whatever means possible. Run with it, throw it – and if the other team has it, get it back! 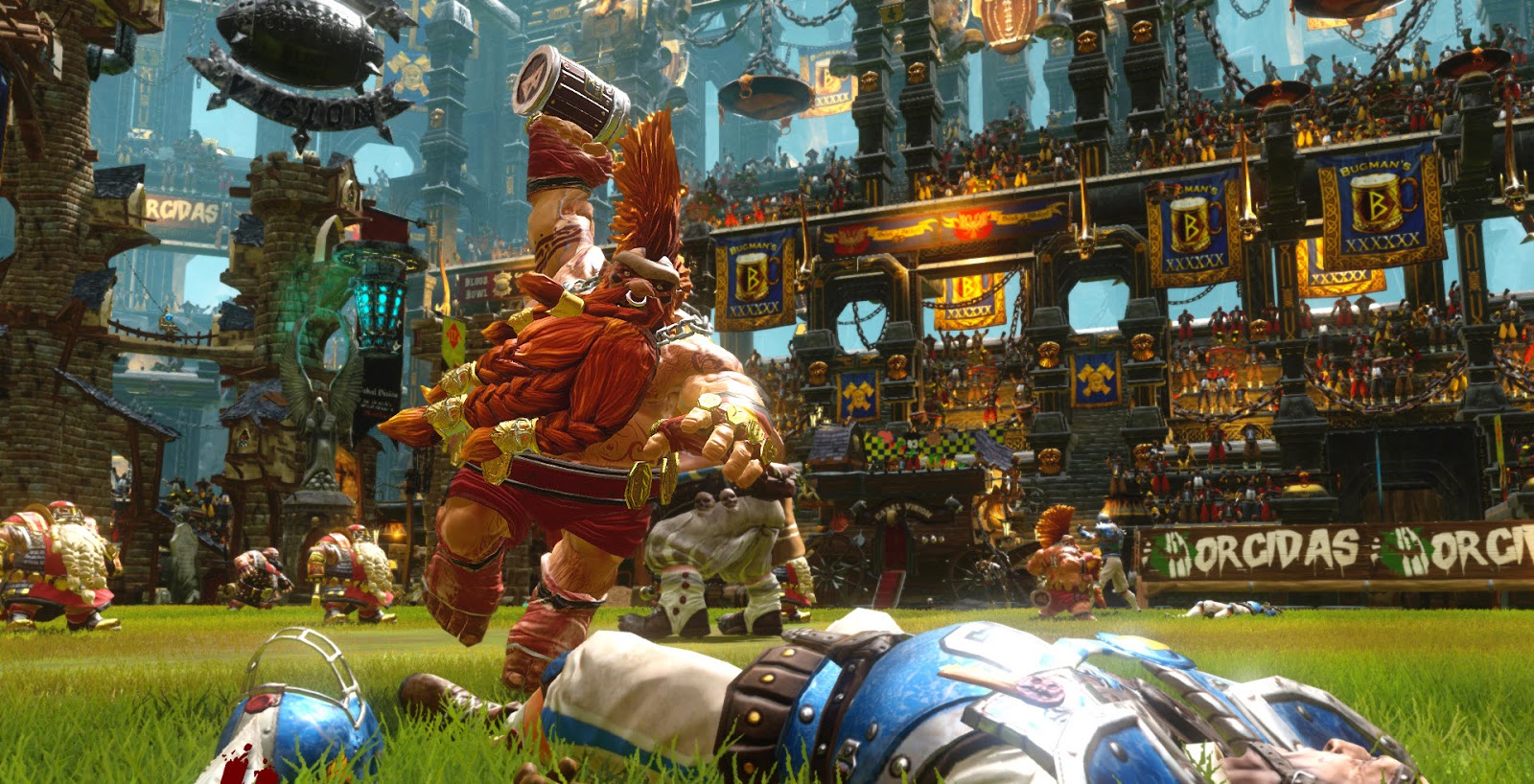 The tactical aspects come into how you manage the players on the field. Depending on their roles, some players are simply better at some aspects of the game than others. When you receive the ball on a kick, a thrower is usually an ideal candidate to pick up the ball. They, like catchers, tend to be quick but fragile. You want linemen and blitzers handling the contact with the other team. Players can generally move over large chunks of land quite easily, but if you push them to their range limits, there is a chance they will fall over. If they move adjacent to a player from the opposing team, there is a chance they will get tripped up. If you throw or catch the ball, there is a chance it will be caught or dropped. When your players engage in melee, there is a chance that someone could get pushed back, knocked down or worse. Notice a trend in that paragraph? The word chance.

That is because most actions in the game are dictated by the roll of some dice. The dice are shown on the screen, helping to sell the board game aesthetic and makes you feel like there is a bit more control over what is really just randomly generated numbers than what you actually have. The campaign mode is a solid single player experience that somewhat plays out like a lengthy tutorial. This is a tremendous help, as I found the original Blood Bowl to be a vague experience. I did not understand what was happening half the time, and it grew to be a frustrating experience. Here I never felt that same twinge of frustration over lack of understanding. It is still a good deal of fun, but the real entertainment is in the league play where you can create customized teams to do battle on the field.

Games earn you money, which can in turn be leveraged into purchasing new players or stadium upgrades and more gives you a solid sense of progression. Additionally, it is less crippling than in the campaign mode where your players get killed or crippled (ever had a blind orc catch a football? Turns out it doesn’t go so well). Races play a big part in not only how your team holds up on the field, but off of it. Play a lightweight race like a Wood Elf and you are more likely to get mauled in combat than if you are using a hardier race. However, they compensate on the field with their nimble ways, creating some breathtaking opportunities in the right situation.

And that is really the key to Blood Bowl 2 – knowing not only your team but the opposition. I found myself playing a far different style with my human team when I was up against lighter races. Against them I was building up powerful lines of blocking and initiating all of the combat I could along the way. Bring in a heavyweight opponent? Time to spread things out a bit. What if both teams are light or heavy? Well, then things get really interesting. The formula works well both on and off of the field.

One area of concern is the user interface. The game plays quite well with a controller, but it can still be a bit taxing to find your way around. Also, I wish the font size could be adjusted. Similar to the problems Chris had with Nobunaga’s Ambition, it feels like Blood Bowl 2’s text was built with PC screens in mind. What’s the difference? Most of us sit about a foot away from our computer monitors, but oftentimes we sit six to twelve feet from a television screen. I found myself able to play the game itself fine from my usual couch perch, but some of the menu screens between games forced me to sit about halfway to the television, occupying a spot on my ottoman. 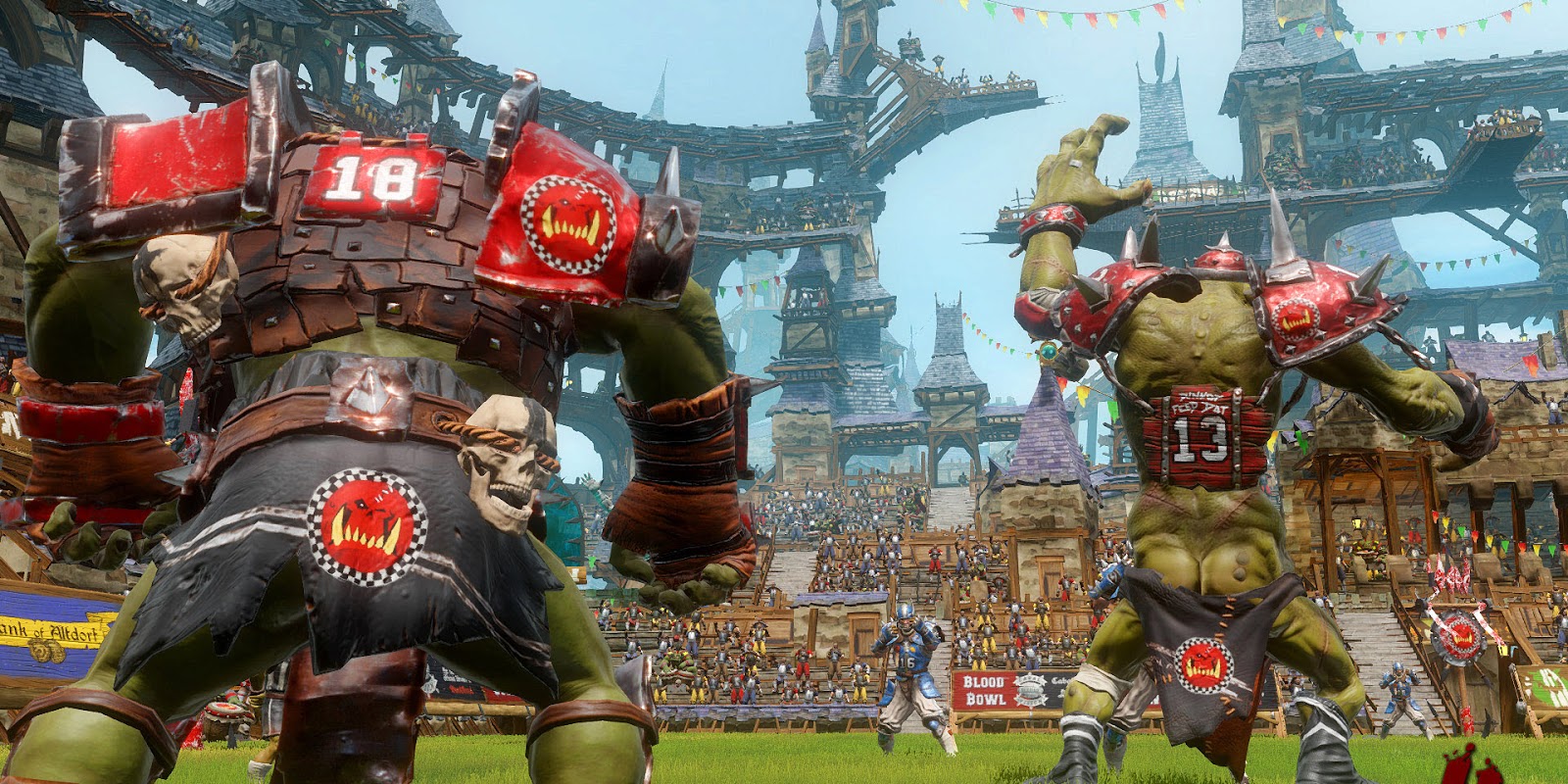 Turns could be a bit snappier as well. I do not know if the issue is animation, computation time or something else – my guess is it is a mix of factors – but turns feel like they drag on a bit longer than they should. For a game that has barely more than a dozen turns in a game, it can take quite a while to get things done. AI teams could certainly wrap things up more quickly, but even my team took a sizable time investment when I was trying to perfectly place each and every character on the screen. I do not know if there is a single answer to this, but it does feel as though Blood Bowl 2 could benefit from a bit of optimization.

While I love all of the different races and how they pan out uniquely on the field, fans of the original game and its expansions might raise an eyebrow at the more limited number of races to choose from. It feels like there is going to be some paid DLC down the road with races like Underworld and Halflings missing from the current version of the game.

At its core, Blood Bowl 2 is a strategy football game. There is an absolute ton of humor in here from the announcers to the ridiculous overall scenario. Watching someone get tanked by a big hit never grows old and the different races provide plenty of options to consider on the field of play. The UI and graphics are leaps and bounds better than the original game, though returning players might find the shortage of races a cause for concern.