If you are here looking for deep narrative and character development, you’ve clicked on the wrong review. Looking for some intense action in a vertical shooter? You have absolutely come to the right place as Eschatos does a great job of bringing something new to the shoot-’em-up genre. 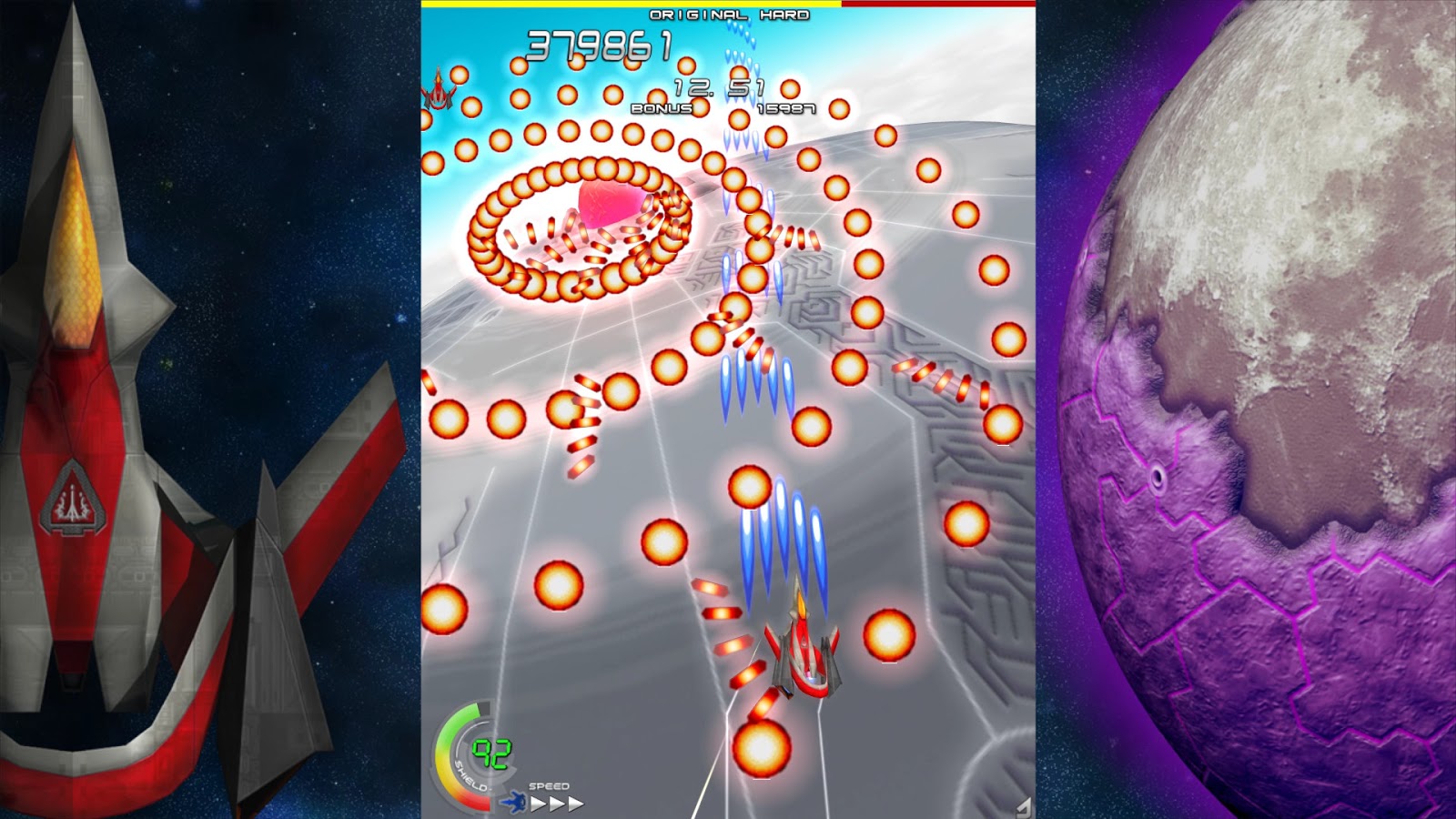 Original, Time Attack and Advanced modes greet you, and while all three play out over the same game and enemy formations, there are different mechanics to each. Original has your ship powered up and instead of collecting power-ups, you fly over the drops and it clears the screen of all enemies. This is a sort of ‘easy’ mode to be honest, because your ship is powered up already. Weaponry basically comes in two flavors – long ranged and wider angled. The former is great for taking enemies head-on, while the latter can help protect your blind spots.

Advanced mode has a more traditional feel to it, as you start off with a basic gun and the power-up drops actually can improve your ship or drop Flashes (the aforementioned screen clearers). Here you have to manage your shield as well. The shield is probably Eschatos’ great innovation. It protects you, as you would expect by the name, but it also has an offensive twist as it can deflect shots. You still will want to dodge more often than not, but the shield really adds a nice layer of strategy to the game’s frantic action. 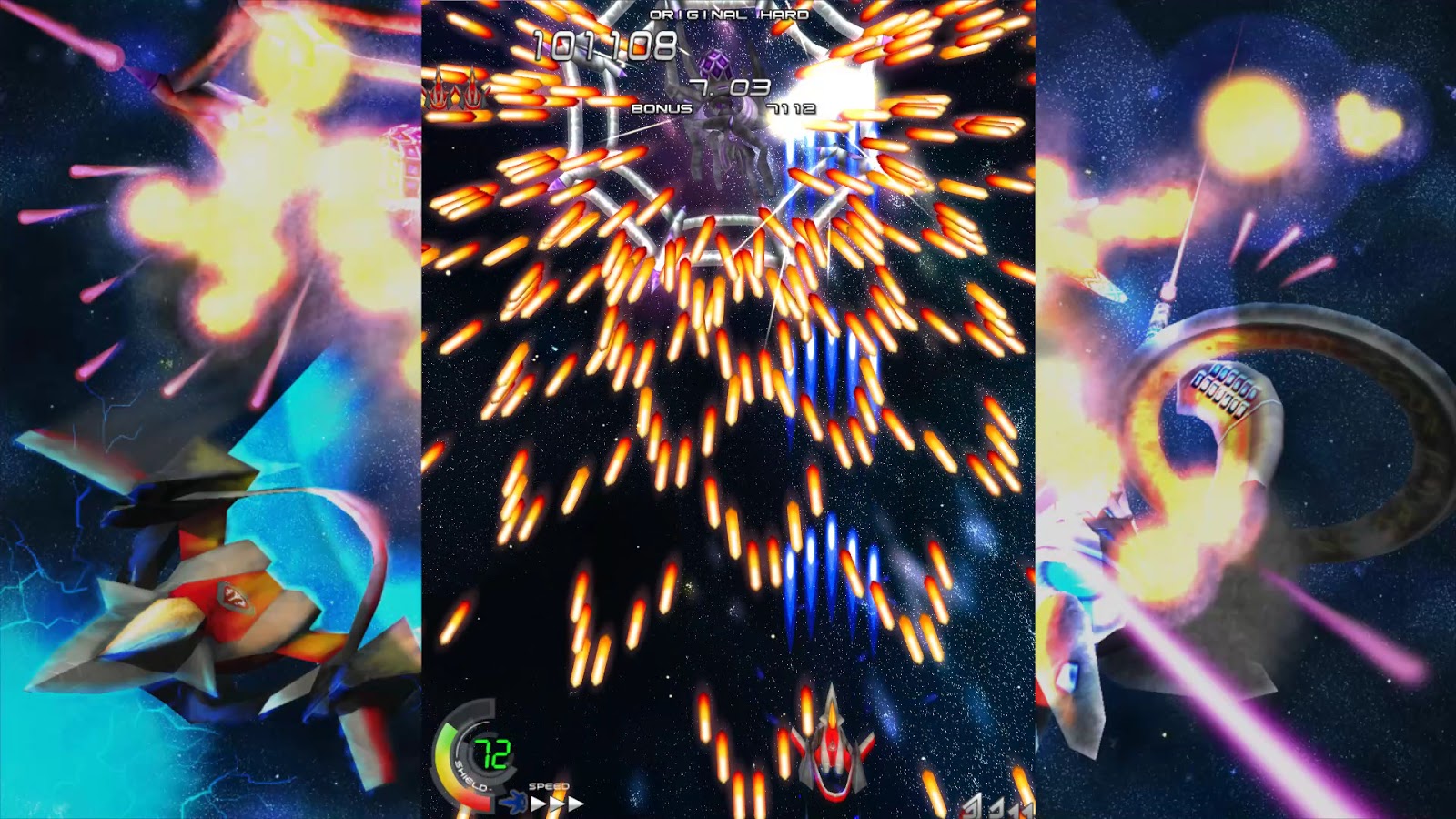 The Time Attack mode is actually a pleasant surprise, because it was different than I had expected. Basically you replay the game, but when you earn extra lives your time score is better, but get hit and you do worse. Here the leaderboards are all about your actual time and not your score. An interesting twist, though Advanced was the one I spent the most time with while Original will likely be your jumping in point.

Scoring is really about chaining together waves of enemies, and should some escape? Your score multiplier drops in a hurry. This is less about predetermined enemy patterns and more about understanding how certain enemies work. They feel reactive to your play style – for example if you load up on one weapon type too often, they will usually countermeasure in some fashion. The enemy movements start off simple enough, but by mid-game there were some kooky patterns that had me second-guessing just where my opponent was moving next. 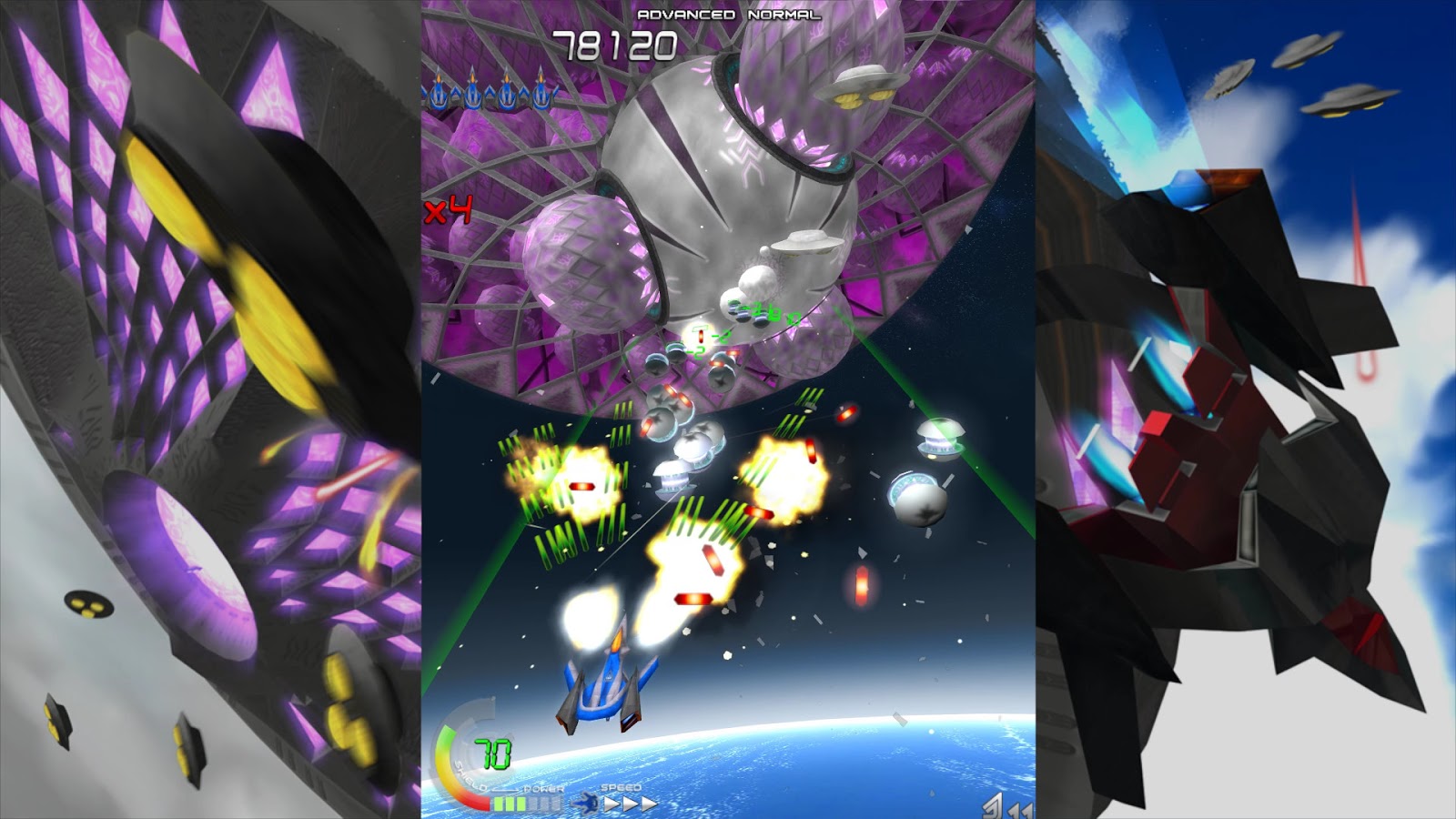 Visually Eschatos is a typical shooter in that it uses bright colors and plenty of things blow up and the bosses look the most interesting out of anything else you will encounter. One interesting effect is the occasional change in in perspective as the camera sweeps in to alter your perspective. This could have been terrible, but in fact the effect was pulled off quite nicely and I never dreaded the change in view. The music is not the most memorable out there, but it fits the tone and the pace of the game well enough.

The alternating shot types and the shield management really help to separate Eschatos from other shooting games, which are usually more about dodging bullets than anything else. It is less ‘bullet hell’ and more ‘old school shooter’ that benefits from being injected with a cool shield mechanic. Fans of the genre will no doubt enjoy what Eschatos has to offer, but it also deserves credit for being a more approachable than most shooters and therefore could serve as an excellent starting point to genre newcomers.