Being a huge fan of tactical board games, Heroes of Normandie appealed to me right off of the bat. The visuals are crisp and clean, the rules are easy to learn and the game itself has a brisk pace to it that belies a good amount of tactical depth. Heroes of Normandie is a solid surprise and a title strategy fans should consider.

One of the first things that stood out to me when I fired Heroes of Normandie up was that there was no shortage of options available to me. Three different campaigns, a Skirmish Mode, multiplayer and more – I was impressed by the different modes and options. That feeling of being impressed continued well into the gameplay. With a large assortment of different units, I thought that this title might have the potential to be confusing, but by and large the learning curve was actually pretty agreeable.

Both the visuals and the easy-to-read menus make Heroes of Normandie feel like a light-hearted affair (which is saying something since we are, in fact, talking about war). There are a trio of tutorial missions that manage to straddle that fine line between being briskly paced and throwing too much at you to digest. I never felt overwhelmed by what they were teaching me, and by the time I was ready to roll without my training wheels, I felt as though I had a good grasp of the basics. That being said, there were more detailed items such as what markers meant or how the Orders work, but I was able to figure it out with a bit of trial and error. I suspect that the target audience here would be those who have played the board game previously, but even though I had not, my confusion was pretty minimal. 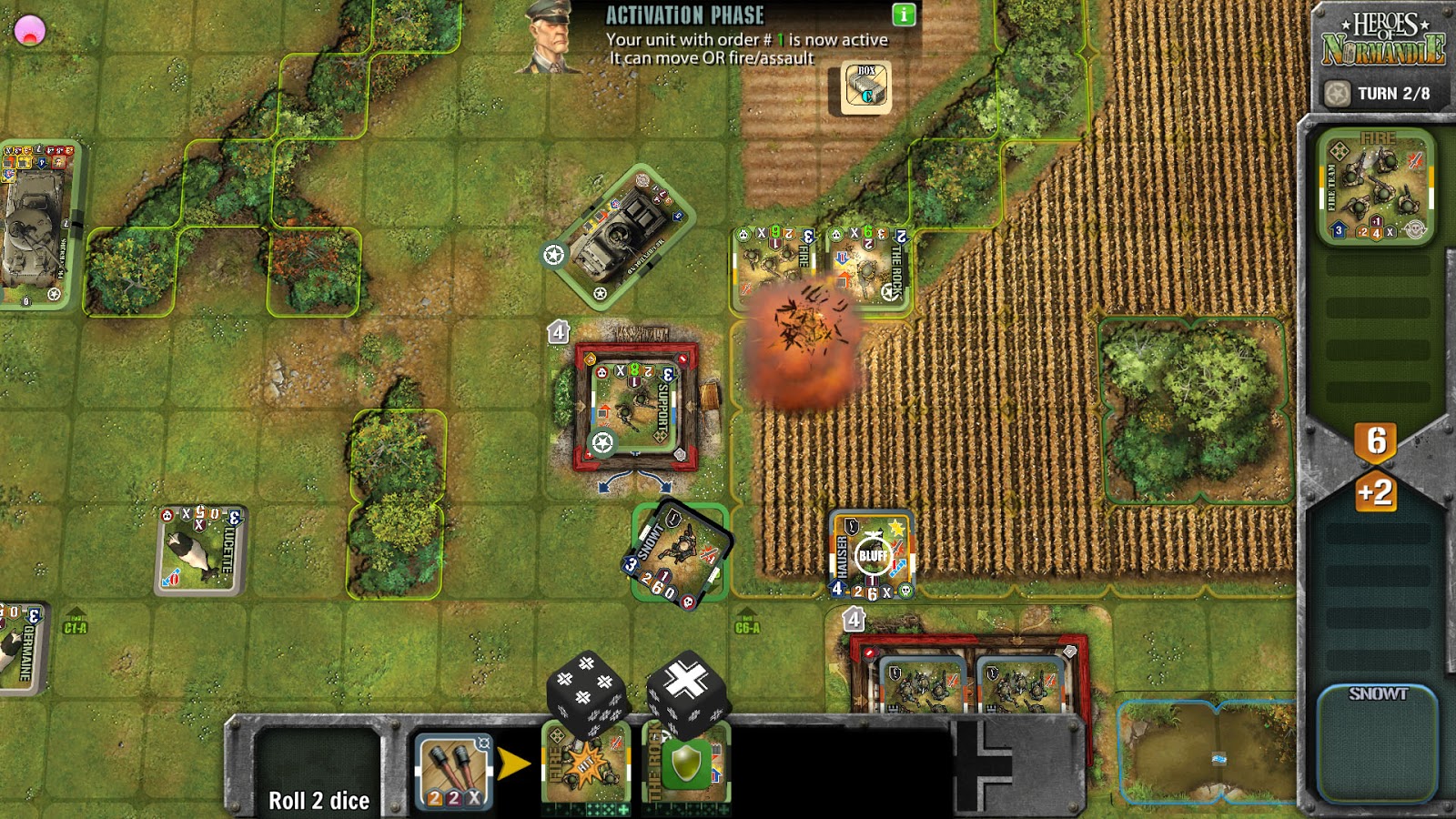 Issuing commands and moving units about the board is actually pretty quick and easy. The user interface is logically designed and that helps speed the action along. A skirmish might only last twenty minutes or so, which is a far cry from strategy games that ask you to invest an hour or more per scenario. I think of it more as a quick bite of strategy, rather than a full meal. Decisions certainly do matter, but this based on a board game, so the depth is perhaps not as deep as other strategy games that run a series of complicated calculations behind the scenes.

The music is appropriate for the visuals, which are bright and colorful – and well, they remind me a great deal of a board game. Rolling dice is a natural part of the process and here you can see them on the screen, lending a more tactile feel to the presentation than if it was simply a series of numbers shown at the bottom while computations were being done. 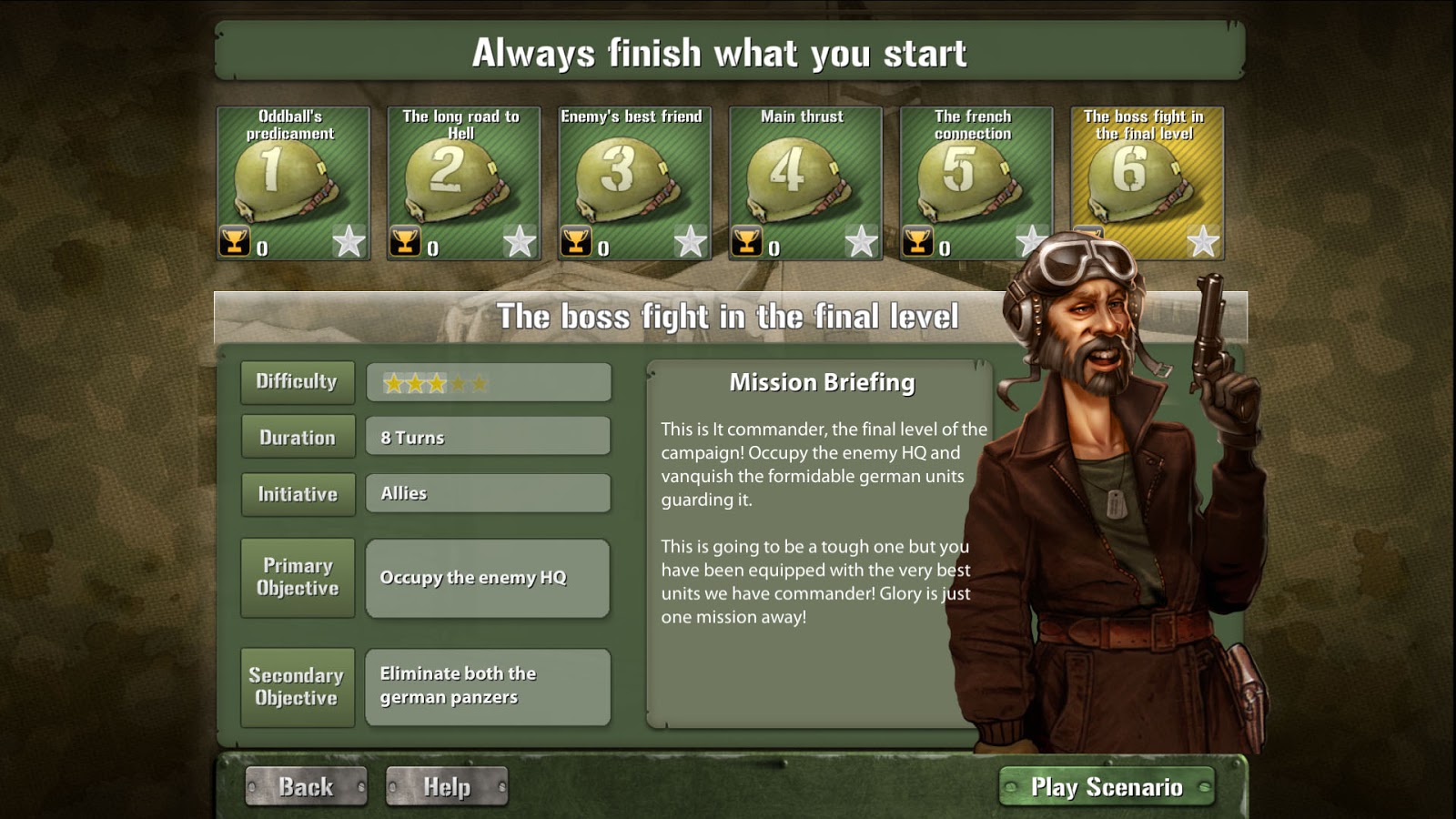 The online mode is solid, but the experience is only as good as your opponent I have found. If I play it with a buddy who has a pace matching my own brisk one, we usually wrap up our session in about the same period of time as an AI battle would. I have had some multiplayer sessions run closer to the hour mark, because my opponents sat back and thought and then over-thought each and every move. That really is not the nature of the game, and it does drag the experience down some, but where competitiveness is involved, I cannot say that it is a complete surprise.

Heroes of Normandie should scratch the itch for anyone looking for a quick but fun board or strategy game. It is a great digital representation of what a board game feels like, with a brisk pace and attractive visuals. The depth here might not be on par with some other strategy games however, so set your expectations accordingly. Having read up on the board game, it looks like there are several expansion, so it feels as though this title probably has room it can grow as well.