Crimsonland is a wonderful tale friendship and camaraderie over adversity. Sitting either alone or with friends in a wide open space engage in dialog with a variety of Alien races to Zombies wanting nothing more than to engage in cuddles in this cold landscape in order to keep warm. Using a simple narrative that speaks volumes depending upon the choice of dialog, prepare your trigger fingers because the only language understood out in the middle of this barren landscape is good old fashioned lead used in order to paint the ground red with the blood of your enemies before they devour you in this quick paced Twin-Stick Shooter from 10tons. 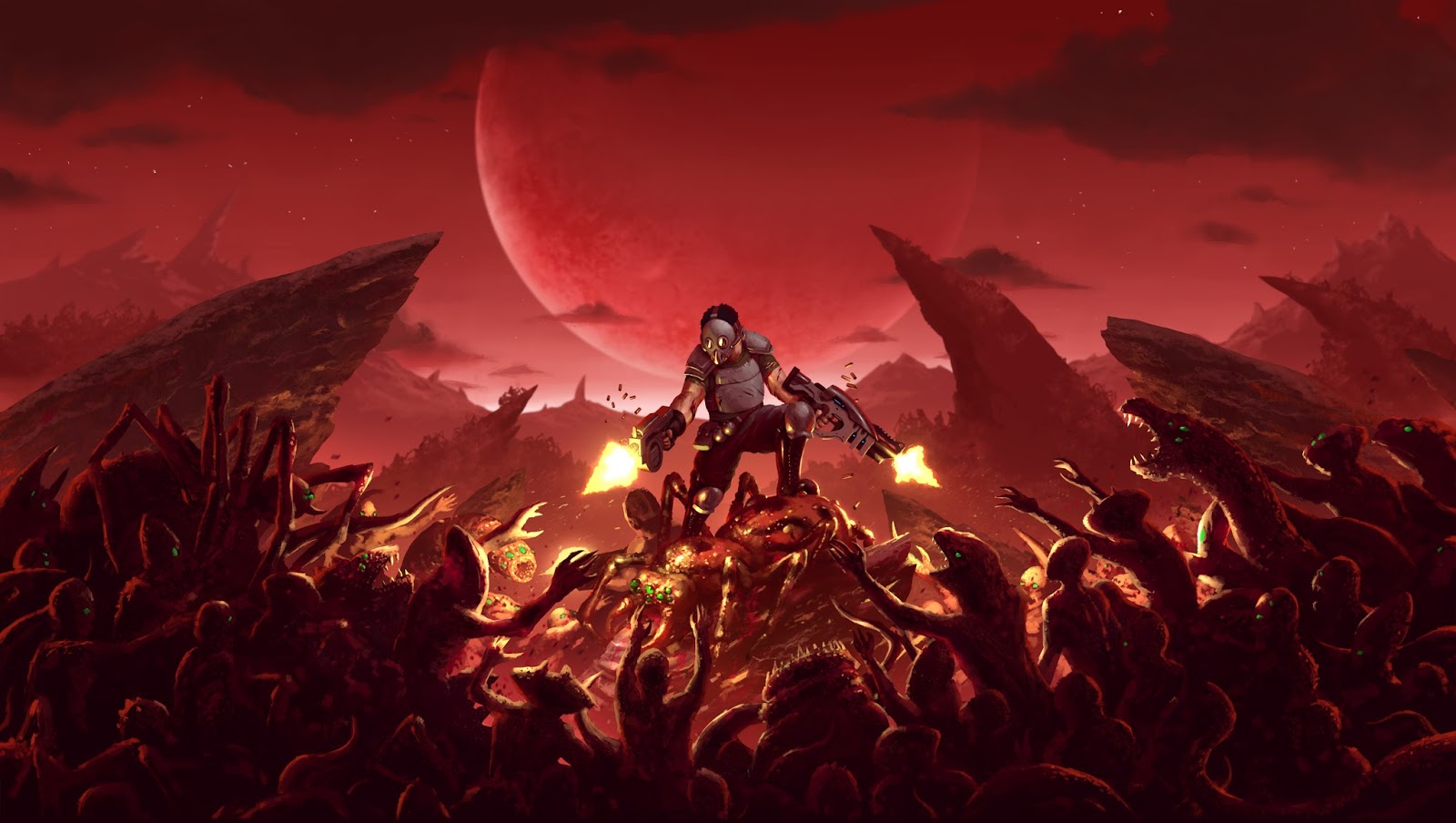 Crimsonland is one of the very few titles that stays true to its name and it doesn’t take very long in order to figure out why. Each and every enemy that falls to your weapons explodes into puddles of crimson that paints the ground where they fall as you try to stay alive as more continuously rush towards you in order to feast on your would be corpse. Generally starting off equipped with nothing more than a pea shooter of a pistol, a shoot and a reload trigger, engage in various modes with in order to quest for new weapons and perks or survive for as long as you can against oncoming tides with no hope of surviving.

Now with all jokes of dialog aside, if you were looking for an in depth narrative of a sole person out in the middle of backwater nowhere planet with lots of different races that live there and who may or may not encounter another lost soul or three akin to his own plights, then you’re in the wrong place. Crimsonland does about zero story but more than makes up for it in the two provided moves of Quest and Survival. Regardless of which of the two is chosen, one thing is definitely provided. Guns to kills things. Gore from killing things. Perks to better kill things. While both modes are separate from one another, Survival mode is reliant on the progress of the Quest mode to get the most out of it. Quest mode has a total of seven chapters each with ten stages that unlock new weapons and perks as the stages increase in difficulty. With the raising difficulty comes an increasing inventory of new guns in order to better help paint the landscape crimson within this barren land. Shotguns, Miniguns, Rockets, and more can all be found in varying degrees of insanity that make some Ratchet and Clank weapons look tame as they come in all sorts of different shapes and sizes. Normal weapons, Ion, Plasma, or Gauze all have their own uses for separate situations but one thing is for certain… who the hell created a Minigun Rocket Launcher? Seriously? They deserve more than just a cookie for that one!

Alongside all the new weapons that come in with all their varying flavors are Perks to really spice up the gameplay. Perks do some normal things like increased rate of fire, faster reloads, upgrade damage with a certain type of gun, and then do some crazy things like make your veins poisonous so that whatever bites you dies from it. Add in some regeneration, packs with the devil, or some armadillo hide and you’re more than good to go to complete the Quests and unlock more Survival mission types to tackle. 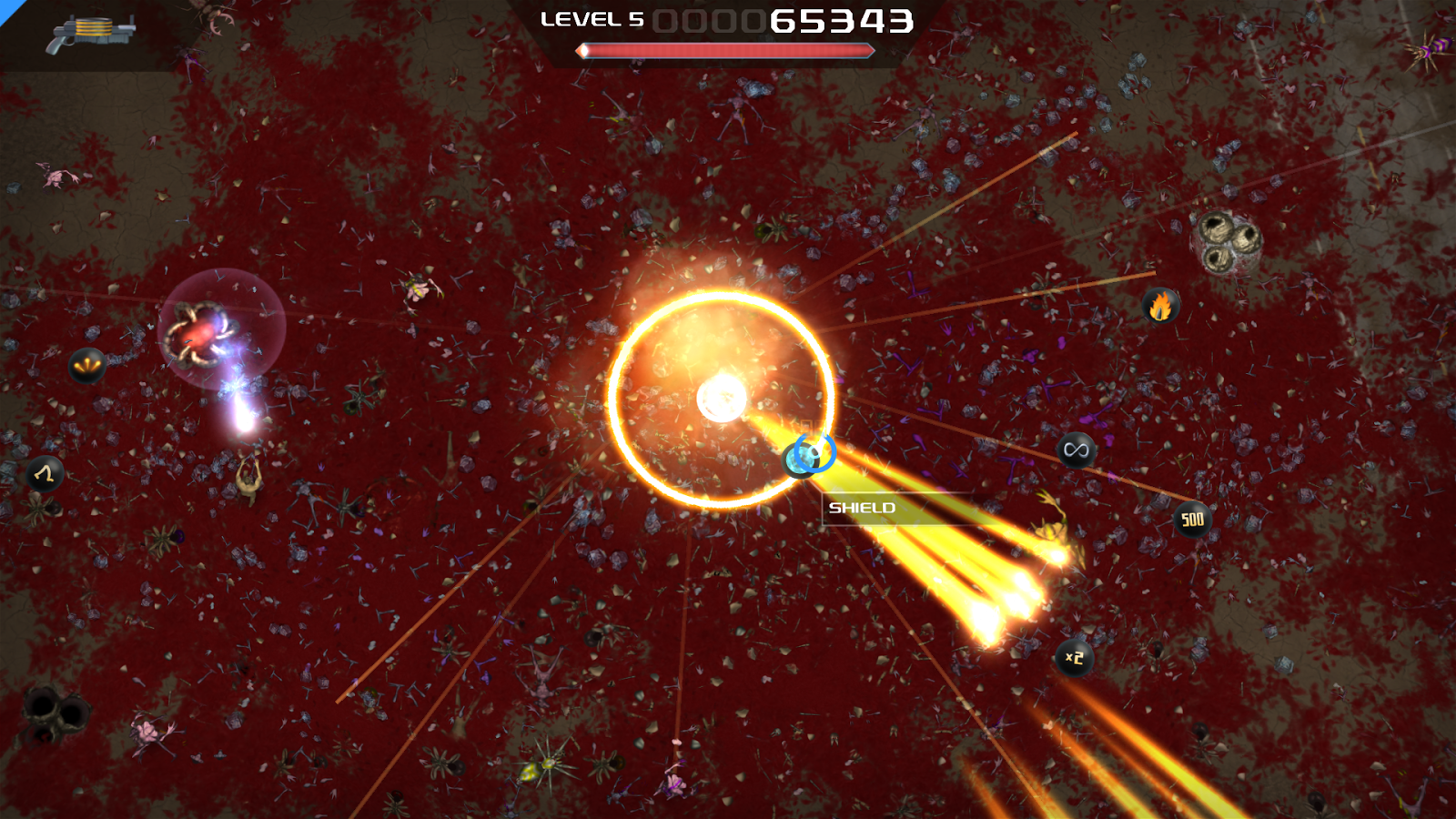 One of the greatest parts of Crimsonland other than the simplified but solid controls is how well coop is handled. With all stages regardless of Questing or Survival being tackled, the stages themselves are nothing more than a giant rectangle to move through. As characters move further away from one another, the screen pans outwards in order to compensate for the distance still required to be seen by each player as the hordes rush in. This honestly made playing with someone else rather easy as having only a single screen to worry about made checking an eye on your allies easy as there was no need to extrapolate everyone’s location in accordance to where you thought you were.

Overall while the main Quest mode on Normal may clock in around three hours, there are two more difficulty modes above it as well as plenty of online leaderboards in order to challenge yourself against. Playing either solo or in coop is a blast of a time with the sheer amount of weapons, perks, and different survival types to challenge yourself to and keep going back for more in the crazy place called Crimsonland.